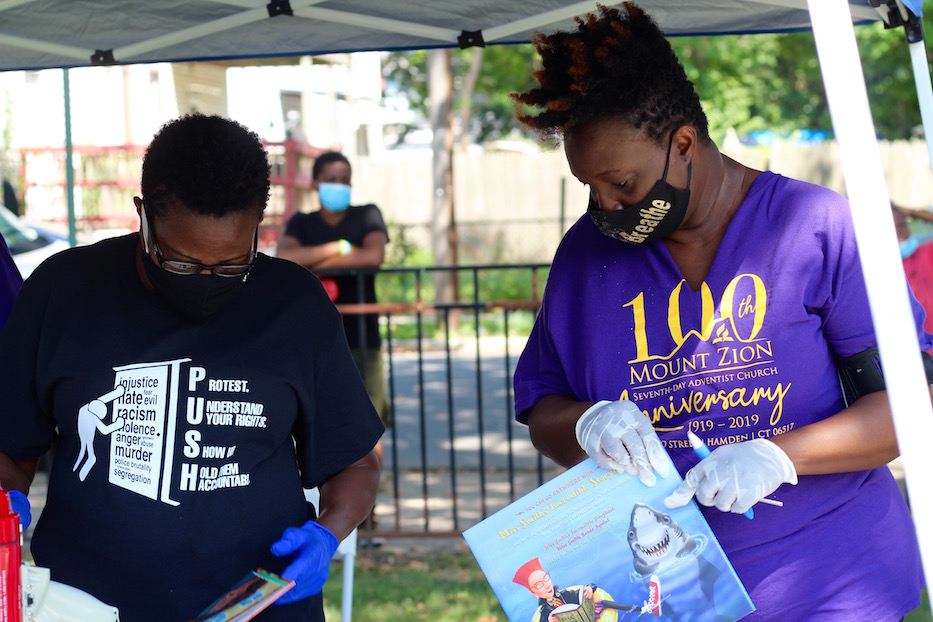 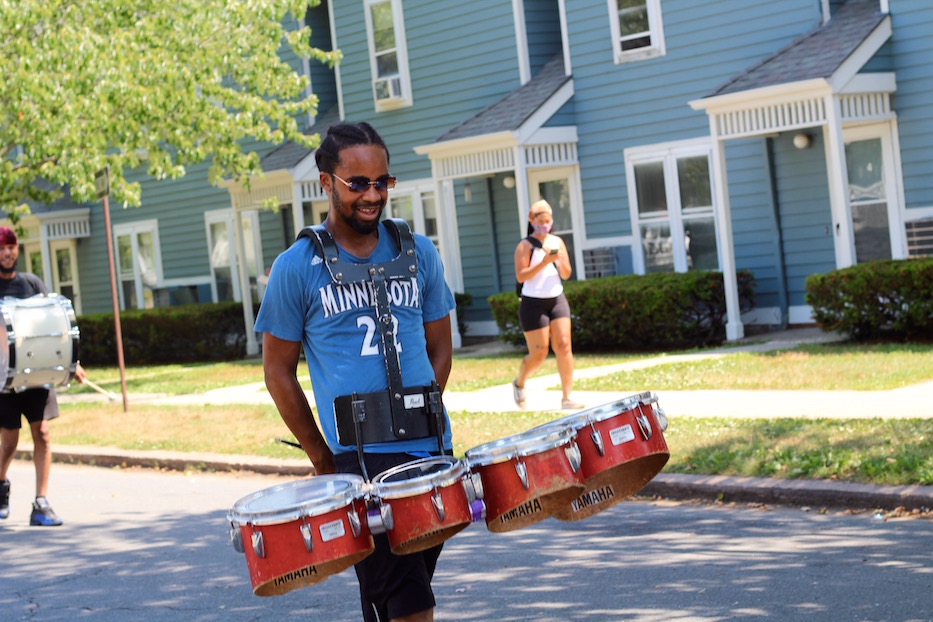 The drums were audible from Goodrich Street before they ever came into view. Kids TV camera crews started rolling right on time. Drivers honked en masse for the health of a community. And for three hours straight, speakers took their neighbors to church on voting rights, civil rights, and faith in the Black Lives Matter movement.

Sunday, Newhallville residents, friends, and neighbors braved blistering heat for an Equality Empowerment March and Rally, held by Newhallville United and a number of faith-based and community-wide collaborators. The event included help from the Newhallville Community Action Network (NCAN), just one of the partner organizations with Newhallville United.

The event began with a bike, foot and car parade from Goodrich and Newhall Streets to Lincoln-Bassett Community School. It was followed by a three-hour rally and festival with community booths, voter registration, speakers, and free COVID-19 testing in the city park that sits beside the school.  Hundreds attended. 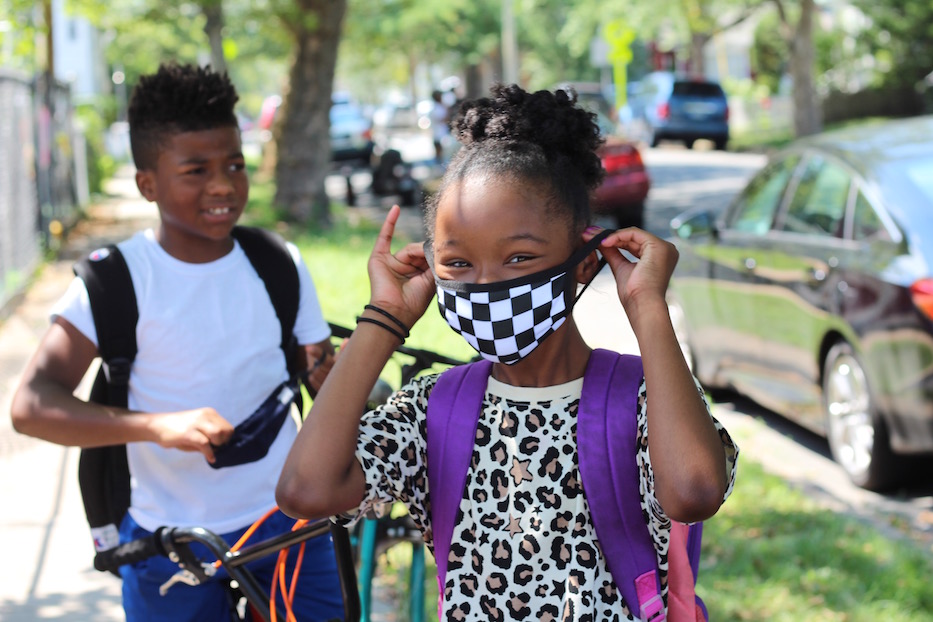 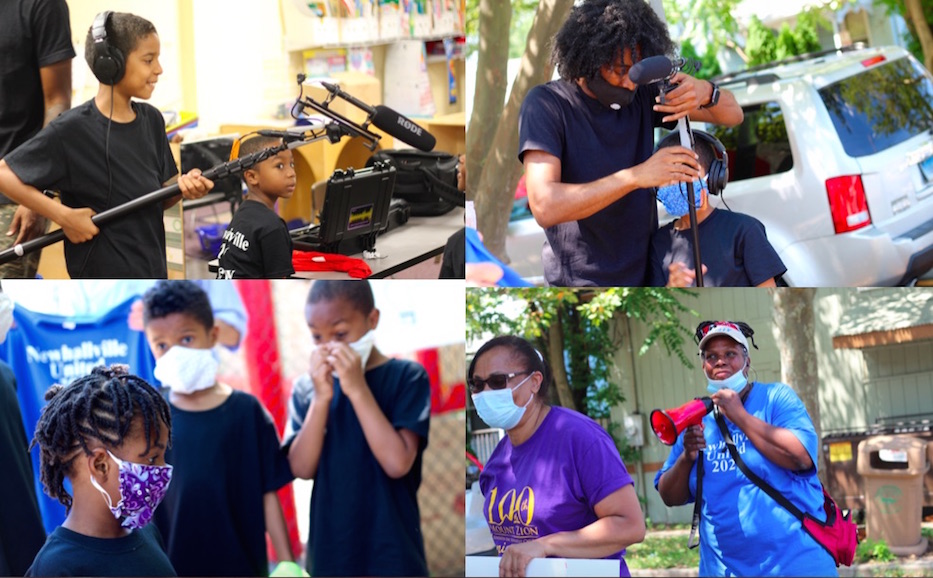 Around her, young marchers were already going through their paces, determined to make the day special in a summer that will not see the Elm City Freddy Fixer Parade, which typically weaves through Newhallville and Dixwell in June, or boisterous graduations and hug-filled family and friend reunions.

At the corner of Newhall and Goodrich Streets, a pint-sized crew from Newhallville’s Kids TV initiative poured out of Harris & Tucker school with camera equipment, boom microphones and at least one tripod. They gathered around U.S. Sen. Richard Blumenthal, who later spoke on the field outside Lincoln-Bassett.

He called Sunday afternoon apropos for the community gathering: just hours before, the late Rep. John Lewis had crossed the Edmund Pettus Bridge for a final time on the way to his final resting place.

Producers Donnell Durden and Kiki Bidon, who teach the program, walked around checking camera equipment and readjusting microphone poles. Every so often, Durden leaned over to students to suggest a question. Behind them, a group of young cyclists listened intently. Moments later, they helped lead the march with Harris at their side. 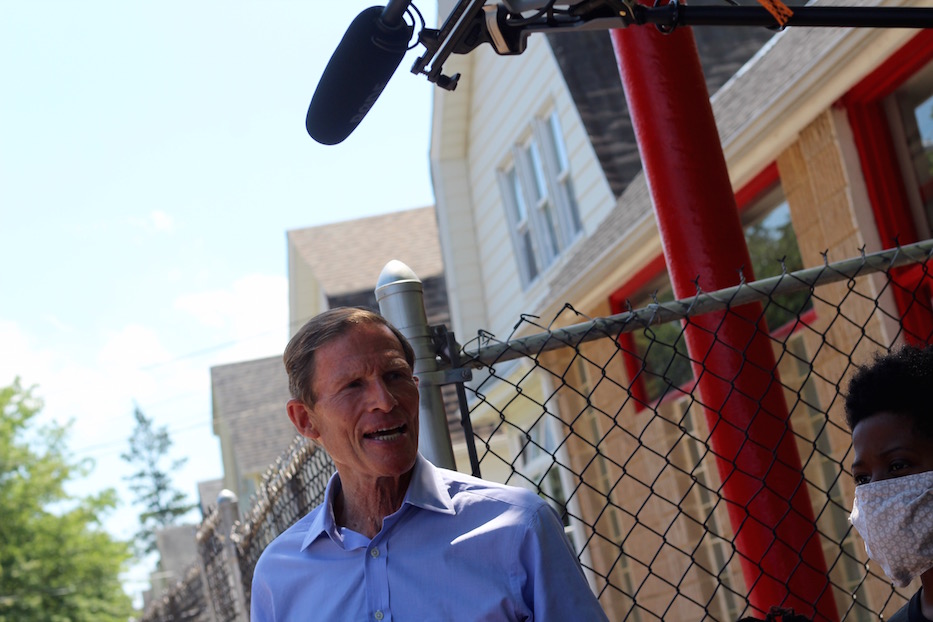 “What will you do for the people of Newhallville?” asked Aneissa Beam, a 13-year-old student who attends Laurel Oaks Adventist School in Hamden and lives in the neighborhood.

Blumenthal paused. Six feet away, 9-year-old Jayden Bolden adjusted the boom mic, waiting to hear what the senator had to say.

Across the street, members of Nation Drill Squad and Drum Corps rehearsed, the steady ra-ta-ta-tat of their drums swelling over the hot street. Myran Dardan, who leads the group, nodded along methodically as he hammered out one last practice round. A car pulled around the corner and waited for the march to begin. It had all the signs of summer, with sudden reminders of COVID-19: music seething from car speakers, welcome breezes and waves of hot, still air, windows rolled down, drivers cautiously masked up. 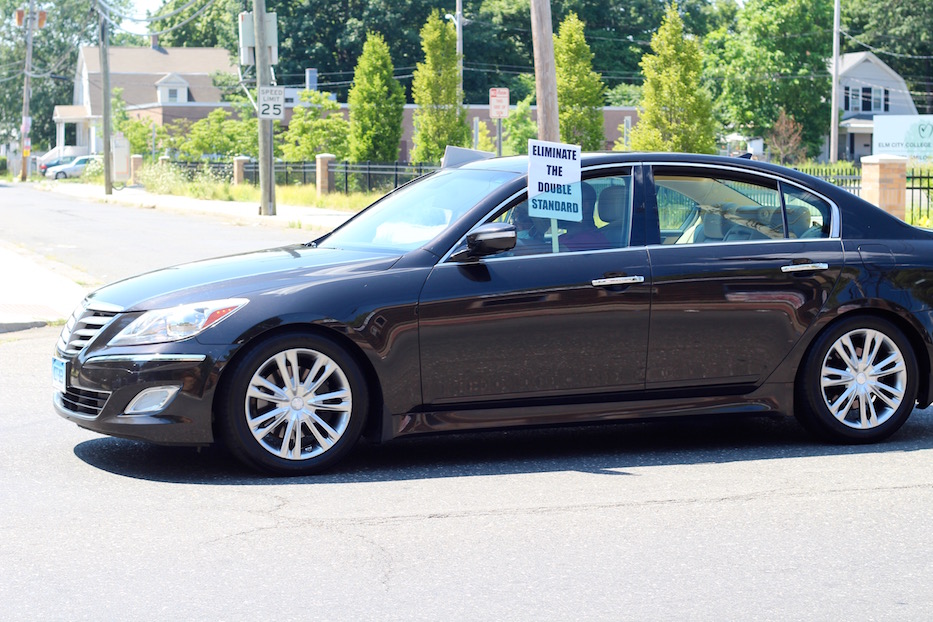 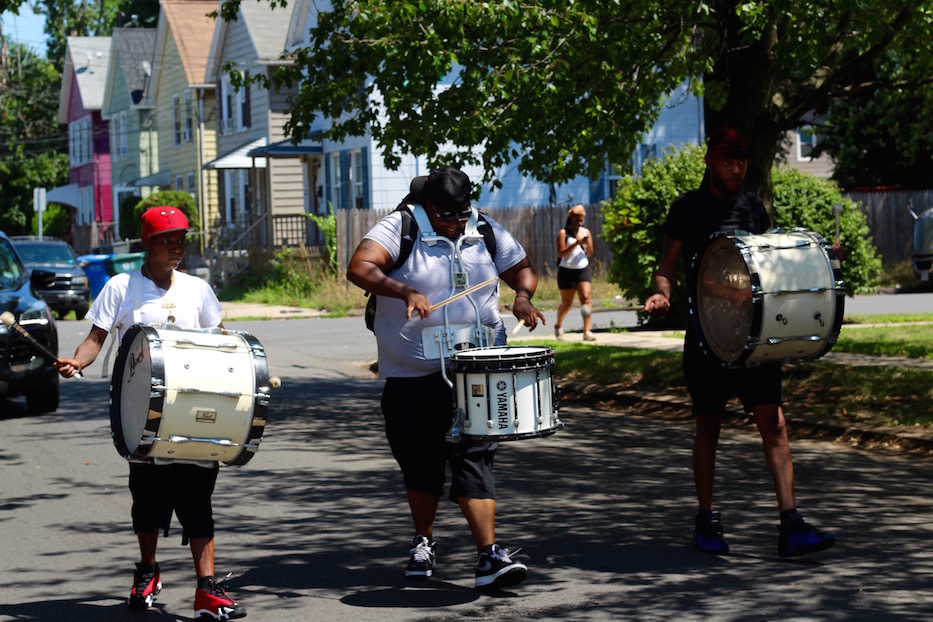 Harris hustled to the front of the line, where cars idled and cyclists waited close to Dixwell Avenue. Then, as if someone had flipped a switch, she started walking. Behind her, cars honked their horns. Some drivers carried signs as they steered, with messages like “Black Lives Matter” and “Eliminate The Double Standard.”

As the drums boomed and rattled over Goodrich Street, neighbors moved out onto their porches and danced along. Phones came out, taping the rally as it made its way onto Dixwell Avenue.

When they rounded the corner onto Dixwell, it was as if some New Haveners had been waiting for them. Newhallville resident Mical Bethea lifted one-year-old Messiah in his arms as he soaked up a neighborhood sound bath. 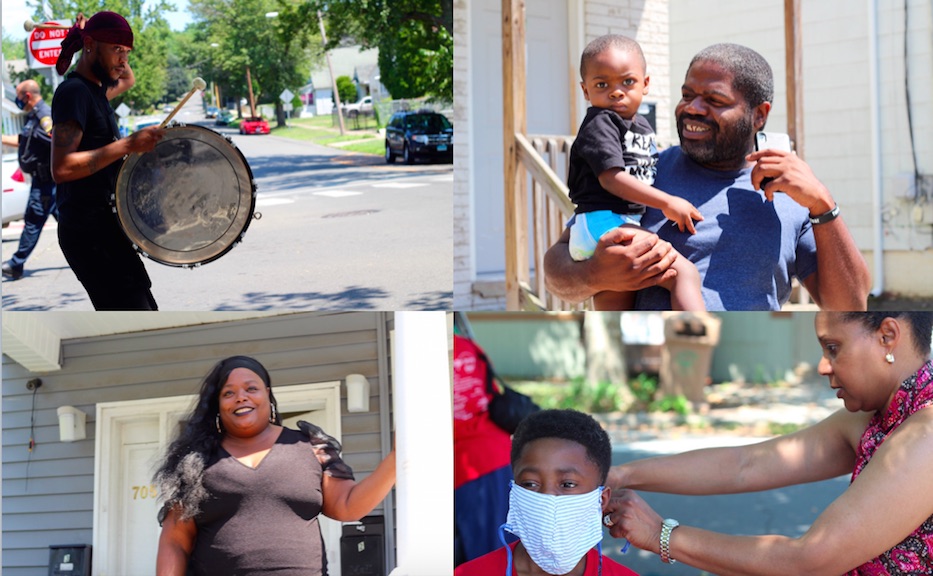 Closer to the rally’s turn onto Hazel Street, Juanita Blackman came out onto her porch, a heavy, stabilizing cast on her ankle no match for her excitement. She said she came out not only to support the rally as a neighbor—and to get a Sunday serenade from the drums—but because she’s tired of having to say that Black lives matter out loud.

“All of our lives matter,” she said. “Of course they do. It’s sad to me that we still have to say Black lives matter to be in the same realm of everyone else.”

As the drummers brought up the rear, still playing, Lesly Crockett gave her marching snare a rest for a moment. Born and raised in New Haven, Crockett said she’d come not only to play, but to inject her community with well-earned summer joy. She added that she sees Black lives mattering as part of all lives mattering, that “all living things that are able to breathe, they matter.”

“This gives positive feedback to the community,” she said. “Not saying that it’s only safe to be inside, but you can be safe outside as well.” 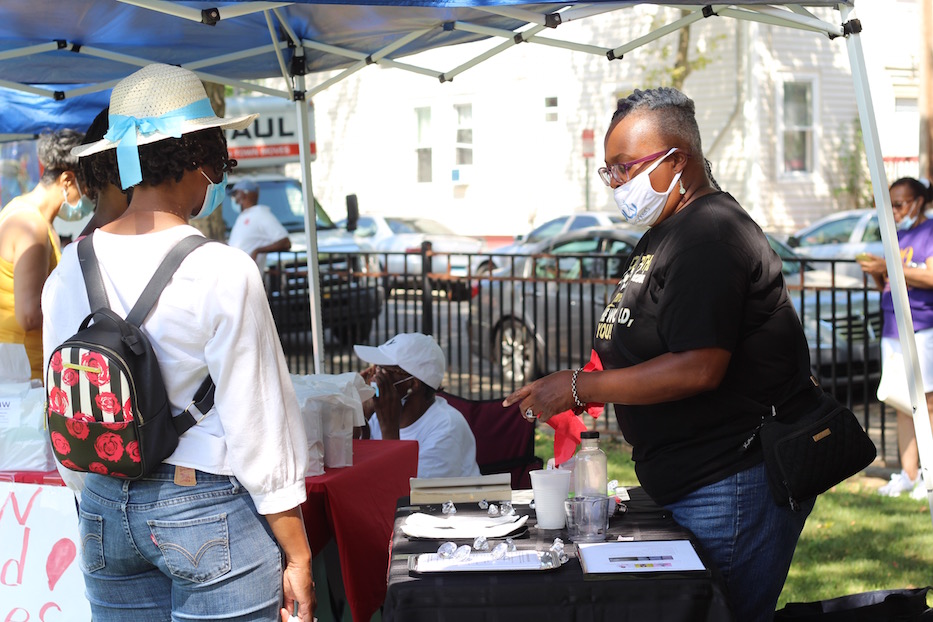 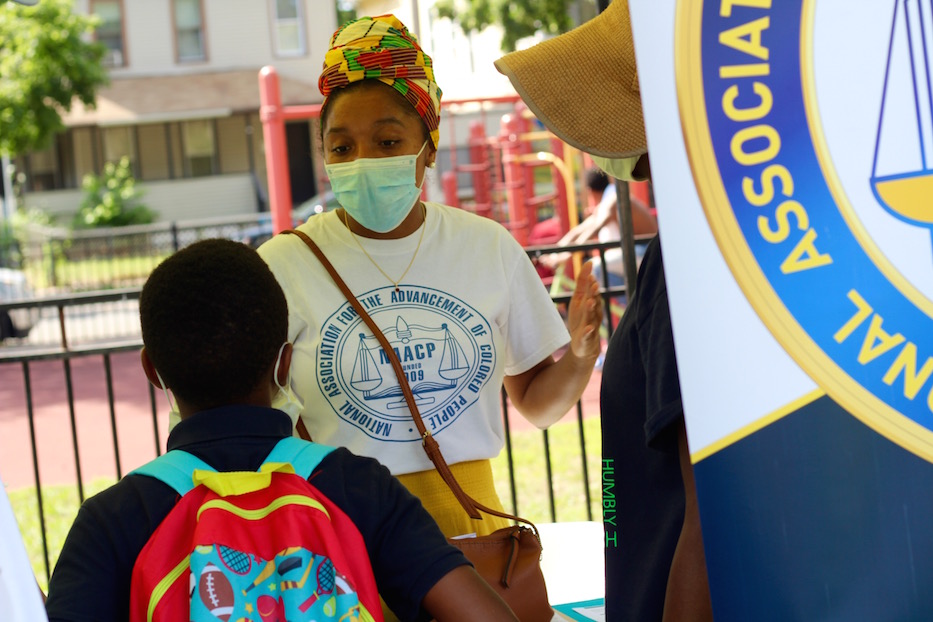 Outside Lincoln-Bassett, covered booths were waiting with chilled cases of water, voter registration forms, and melty popsicles hidden away in their shade. Handfuls of attendees, carefully masked and socially distanced, gathered on a sun-kissed lawn, where even the grass and the soil had turned hot to the touch. Others headed straight for the booths, where volunteers handed out books, free menstrual supplies, and information on local community resources. On one side of the field, the Greater New Haven NAACP offered to register voters  while a Census 2020 booth reminded residents to make themselves counted.

Underneath one tent, high school student Nadia Gaskins passed out information on The Perfect Blend, where she is a member of its youth leadership team and new co-ed group called “Elevate From Pain Into Power.” A rising senior at Cooperative Arts & Humanities High School, Gaskins credited the group with giving her a space to talk about the unexpected hurdles of COVID-19, from distance learning to not yet knowing what her senior year will look like. 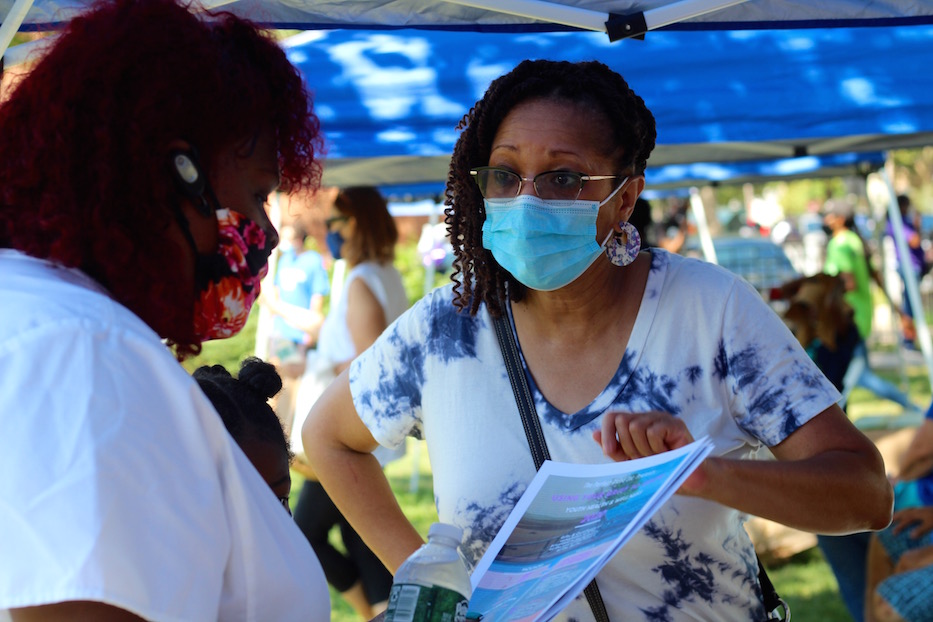 “During the pandemic, a lot of things have changed,” she said. “I’m just trying to cope with that. It’s kind of stressful. I’m excited for the fact that I made it through this year, and it keeps me going. I don’t know what senior year will look like.”

Jeanette Sykes, who founded the program 13 years ago, said she has tried to fill a community need during the pandemic. A longtime community advocate, she has seen the toll that COVID-19 is taking not only on the community at large but specifically on its youth, many of whom have not seen their teachers, classmates or friends since schools closed in March.

Both the youth leadership team, composed entirely of women, and “Elevate From Pain Into Power” have been meeting on Zoom due to social distancing restrictions and best practices.

“We want them to have a safe place for them to experience and express what COVID is like for them,” she said, adding that she’s watched students adapt to drive-through graduations, car parades, and school on a screen. “We want to say, we’re here, and we don’t want to omit the fact that this can be very difficult.” 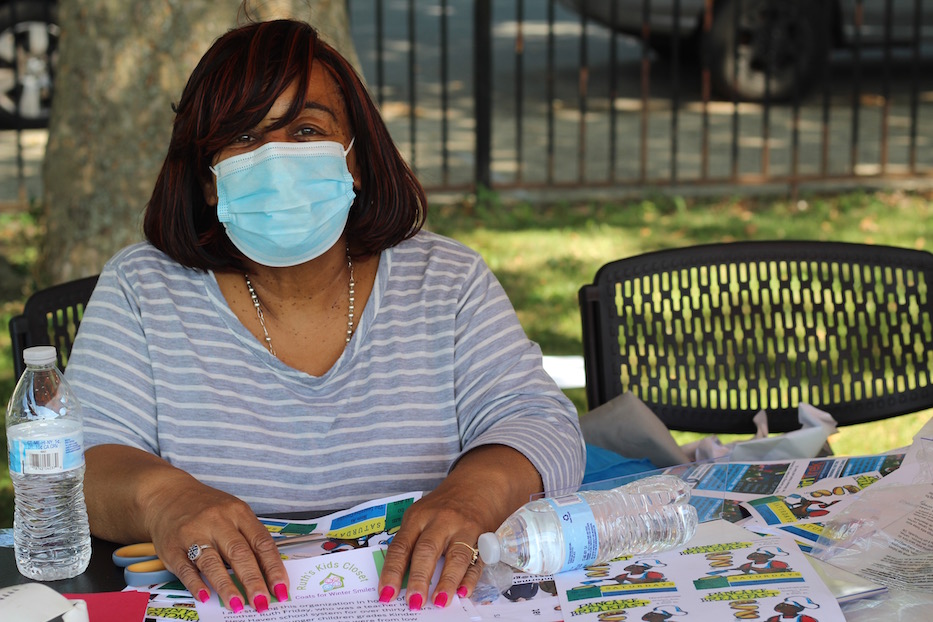 Two tents away, Cynthia Spears handed out sheets of information on Ruth’s Kids Closet, which she started in honor of her late mother, Ruth Friday, who died of Alzheimer’s in 2013. The organization will be collecting winter coats for neighborhood kids before the cold sets in later this year. For Spears, who lives in the Huntington Street home where she grew up, it’s a way to give back to the community while honoring her mom’s legacy.

During her lifetime, Friday was a teacher at Lincoln-Bassett, where she kept a closet full of child-sized winter coats, items of clothing, and other “personal items” for her students, Spears said. When the school day was over, it wasn’t uncommon for her to keep an eye on students whose parents didn’t have other childcare options. She believed in the idea of the village—and she passed it on to her children.

“She loved people, and she loved helping people,” she said. “In addition to providing clothes for kids, she would take care of kids until their parents got out of work. I thought I would never do that. And here I am.” 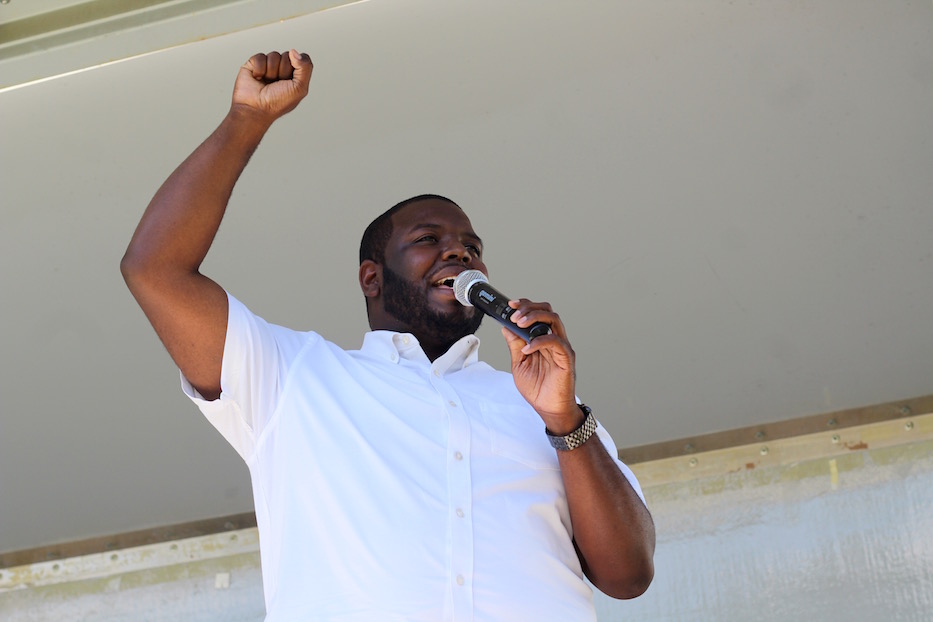 Back on stage, Pastor Nicardo Delahaye jogged up the steps despite the heat. The pastor at Faith Seventh Day Adventist Church in Hartford, Delahaye arrived at the rally to both preach the gospel of Black lives and to hand out books with members of his church.

“We just came out to New Haven just to let you know that we stand in solidarity with you, that Black lives still matter,” he began, the crowd yelling back as he added a customary “I wish I had a witness out there.”

As a 32-year-old Black man, he spoke about not always feeling safe around police, because “I’m just not sure how it’s gonna work out.” He told attendees that he fears for his one-year-old son, who is just starting his life. He invoked the words of Dr. Martin Luther King, envisioning an equitable society for his son. 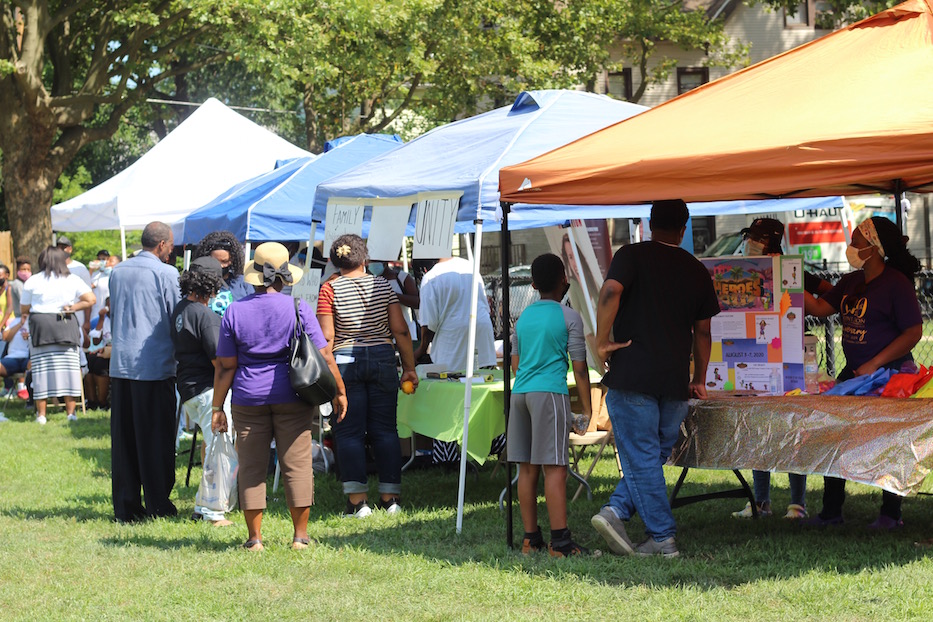 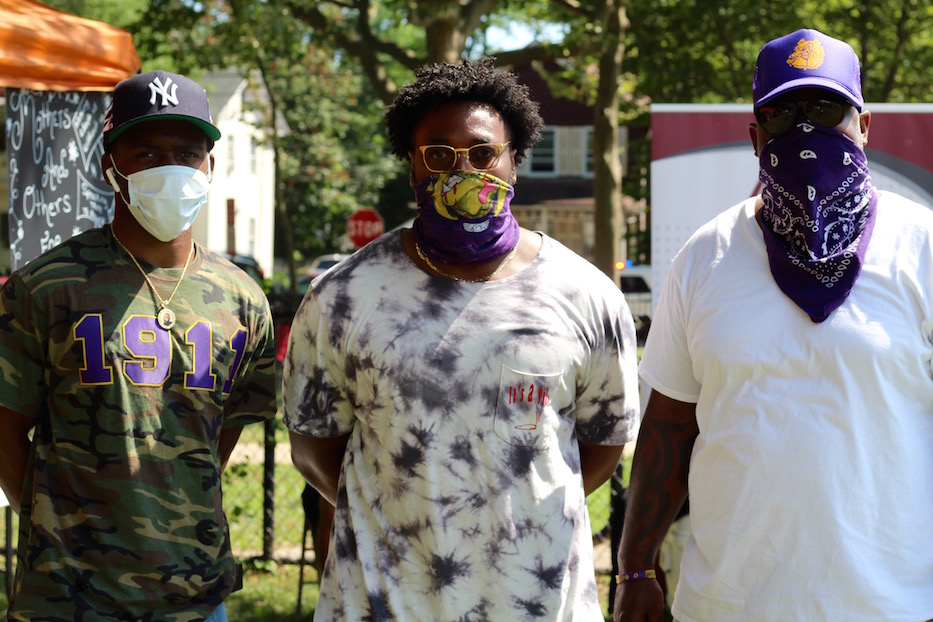 On the sun-soaked field, young kids rode their bikes around listeners, who welcomed a steady stream of faith leaders and elected officials to the mic. Youngsters played in the splash pad beyond the park, jumping through streams of water that glittered in the sunlight. City officials dotted the space, asking attendees if they were registered to vote and had filled out their Census forms.

Members of Chi Omicron Chapter of the Omega Psi Phi Fraternity walked around, sharing information on the fraternity’s mask giveaways, discussions, food and blood drives, and efforts in the community.

At some point, Harris took the mic on stage to announce a milestone: Newhallville Community Action Network has distributed 144,000 baskets of food to neighbors since March, as food insecurity rises during the coronavirus pandemic. Further back, beside a hoop-less basketball court, a few attendees trickled into a COVID-19 testing tent from Cornell Hill Scott Health Center.

Even in the afternoon heat, Harris kept the crowd cheering from the stage. Late in the afternoon, she welcomed State Rep. Robyn Porter and State Sen. Gary Winfield, for what became a call to arms and near-final benediction. Both have been working around the clock on a bill concerning police accountability. After a seven-hour debate, the bill passed Friday morning from the State House of Representatives to the State Senate. 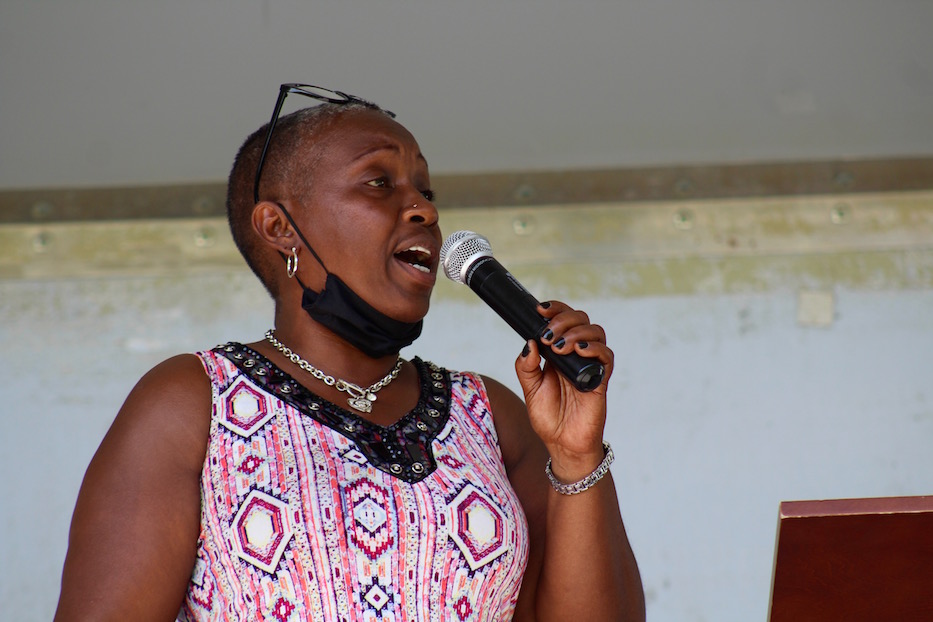 The bill, HB 6004 An Act Concerning Police Accountability (AACPA), is scheduled to hit the senate floor on Tuesday. Before that vote, both urged attendees to get involved, call their legislators, and come to Hartford Tuesday. Both also explained the debate around qualified immunity, a legal defense that protects police officers from civil lawsuits.

“There was no due process for Tamir Rice, or Malik Jones, or Breonna Taylor, or Rekia Boyd, or Eric Garner. Jayson Negron. Corbin Cooper, out of Bridgeport. There was no due justice for them. So this legislation says, you know what? You can have your immunity. Long as you’re doing what you’re supposed to be doing.”

She praised Rep. Jesse MacLachlan, the only Republican to vote for the bill, as “the ram in the bush” that kept qualified immunity in the bill during a 4 a.m. vote on an amendment. Since voting, several of MacLachlan’s constituents in Clinton, Killingworth and Westbrook have posted verbally abusive language on his social media feeds. 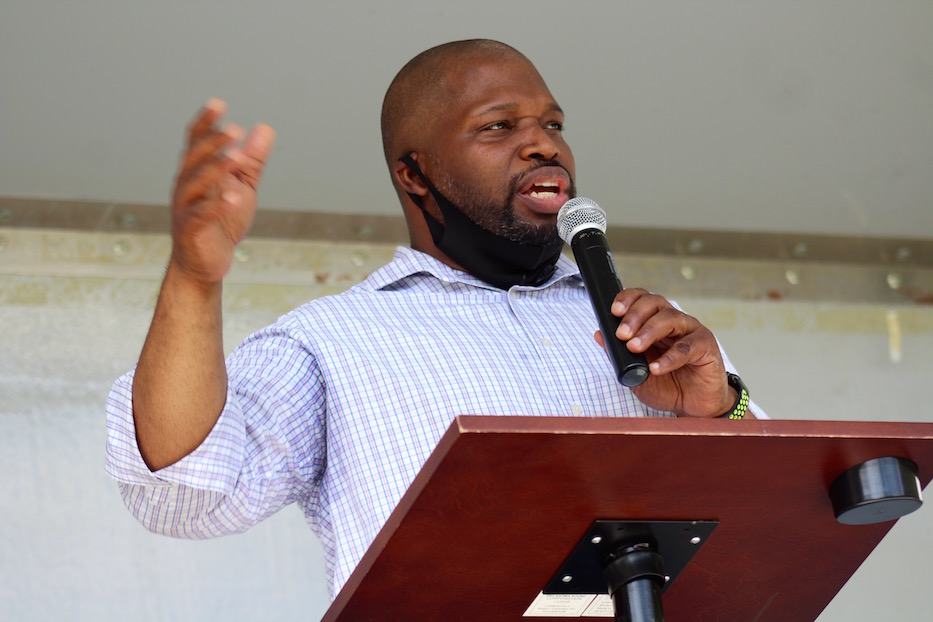 She and Winfield seemed to channel the same united front the day had been crafted around. Both urged attendees to think critically about the power they wield as voters, and about the candidates they are ultimately supporting on the municipal, state, and federal level.

“What matters is, do they speak Black Lives Matter into policy,” he added. “When they don’t do that, they’re not part of the team.”