Juan Castillo Joins "Mask It Up" Crew To Save Lives

WYBC host Juan Castillo walked into his studio and approached the mic. He sat down in a chair he hasn’t seen for weeks, and may not see again for months. He dropped a new piece of information: wear a mask. It could save your life—and the lives of those around you.

Thursday, Castillo joined a growing campaign to “Mask It Up” and limit the spread of coronavirus in New Haven. The campaign is organized by the city’s Division of Arts, Culture & Tourism, in collaboration with local artists, photographers, small business owners and neighborhood advocates.

Photographers for the project include Leigh Busby, Aligning Media’s Tiffany Stewart and Donnell Durden, and I Love New Haven's Chris Randall. A logo has been designed by Keith Appleby of Atelier Cho Thompson. The images will be displayed on billboards that currently read “Spread The Facts/Not The Virus.”

“We are really trying to make sure this campaign speaks to young people,” said Cultural Affairs Director Adriane Jefferson in a phone call Friday afternoon. “I believe that there was a disconnect early on, because of some of the misinformation that was circulated nationally, that this can’t affect young people and people of color. We want to have a campaign in a way that is going to cultivate a trend. To say: not only is it responsible [to wear a mask], but this really is to protect yourself.” 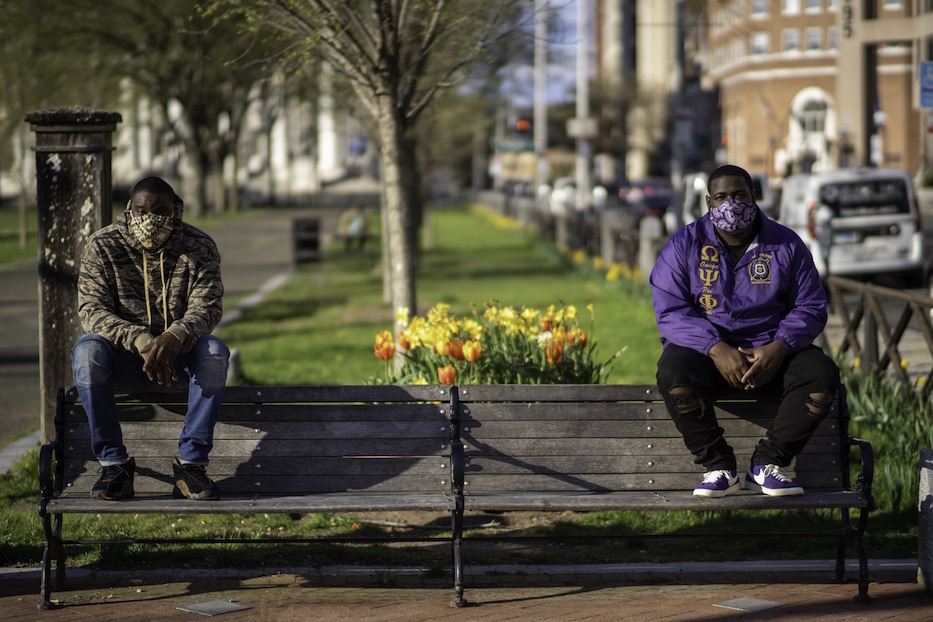 Jefferson looked for “key influencers” to spread the message that wearing masks was cool: WYBC’s Castillo, musician and producer Aaron Rodgers, DJ, multimedia host and educator Avery ‘Slay’ Washington, stylist Renee Loren and Fair Haven champion Lee Cruz. She said she sees it as part of her commitment to equity through the arts: when a musician, producer, or salon owner poses in a mask, they’re re-centering what stories the city is telling, and who is telling them.

“I think who the information comes from is really important,” she said. “Public health and safety is a priority right now. We have to find a way to make that cool. And that is hard! If you look at the communities that have been hit the hardest, you have to think about all of the things that were already taking place in those communities. There’s more pollution in those neighborhoods. There’s a lack of healthcare. There’s often a digital divide. There are all of these different challenges with inequity and with the dissemination of information.”

“We've had a number of conversations about how all of us need to adopt a new and different lifestyle for the foreseeable future,” he said. “And while many people are practicing social distancing effectively and following the advice given by the governor and myself, we're trying to make sure everyone does so.”

Thursday, Castillo said he is excited to get the message out. At noon, he entered the studio for the first time in weeks, the door handle bending as if it recognized his touch. The chatter of an empty but well-run station welcomed him inside: Lauryn Hill played over a speaker somewhere. Castillo set down his keys and leaned against a table to wait for Durden.

For the decades-long radio veteran, making sure that Black and Brown listeners are informed around the virus—and that the city is responsive to their needs—is all in a day’s work. While WYBC’s Temple Street studios have been quiet for over a month—they closed after a host tested positive in March—the station has been pumping out a steady diet of talk and music to keep listeners engaged from quarantine.

“We have a responsibility to the African-American community in so many ways,” he said, disinfecting his phone before a photo in the studio. “Because of them, we are extremely successful. Since this thing started, I went on social media along with my radio personality, and we asked our listeners to contact as many legislators—national, local, city, state—and ask them to provide us with more testing sites.” 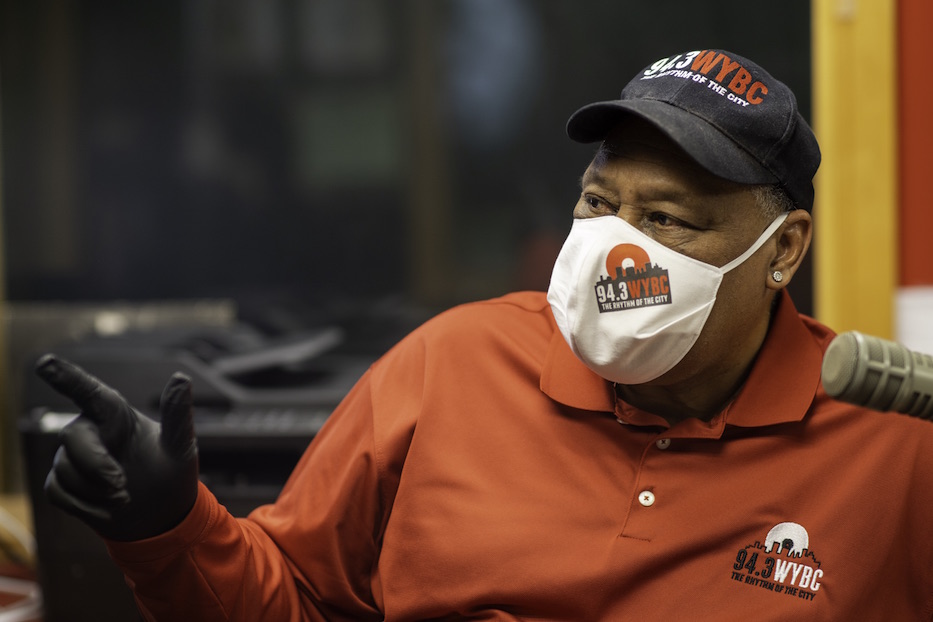 In addition to pushing for new testing sites, like the ones that have since popped up in Fair Haven and on Dixwell Avenue, hosts have also been calling for better access to educational materials, including resources that bridge the digital divide. They’ve urged listeners to monitor their symptoms and get tested. They’ve advocated for carceral reform as prisoners find themselves in increasingly vulnerable positions.

Adding mask-wearing to that rotation felt natural, he said. After the Centers for Disease Control and Prevention (CDC) suggested all Americans should be wearing face coverings in March, Castillo commissioned one from designer Neville Wisdom. Wisdom, who has turned his Westville studio into a mask-making operation, churned out a custom WYBC mask in white, black and red.

Castillo said he’s proud to sport it, along with a pair of latex gloves. Thursday, he added sleek, red Nike sweats printed with the motto “Just Do It” to the mix, as a sort of secondary reminder to those still waffling before they don their masks.

“Young people—they're not taking this seriously,” he said. “They're not wearing their masks. They're not practicing social distancing. We have a responsibility, as a station, to send that message out as much as possible. We've been doing that, and I think that it's making a difference.”

He added that he tries to strike a balance between vital public health information and the heart-pumpingly-good content for which the station has long been known. For the time he spends on local coverage of COVID-19, he makes sure to have even more of the musical throwbacks, tight playlists, birthday shoutouts, and laughter-flecked conversations that set the rhythm of the city.

“I came into this because I wanted to help my community,” he said. “And I've been able to do that for the past 25 years. But this year in particular, it has really reminded me of why I started to do this. And why this is so important.”

As he posed for photos, a mask- and glove-clad Durden suggested framing from six feet away. The two moved cautiously in the space, like distant planets orbiting each other just so. Like Castillo, Durden said that joining the project was a no-brainer.

“We [Aligning] chose to be a part of what the city’s doing, other than just sitting around,” he said. “We want to get out and be a part of letting people know that this is a crazy time, but we’re still living. We’re still alive. We can still be good to each other, and remind each other to be safe at the same time.”