At Long Wharf, An Intimate Invitation To Jelly's Judgment Day 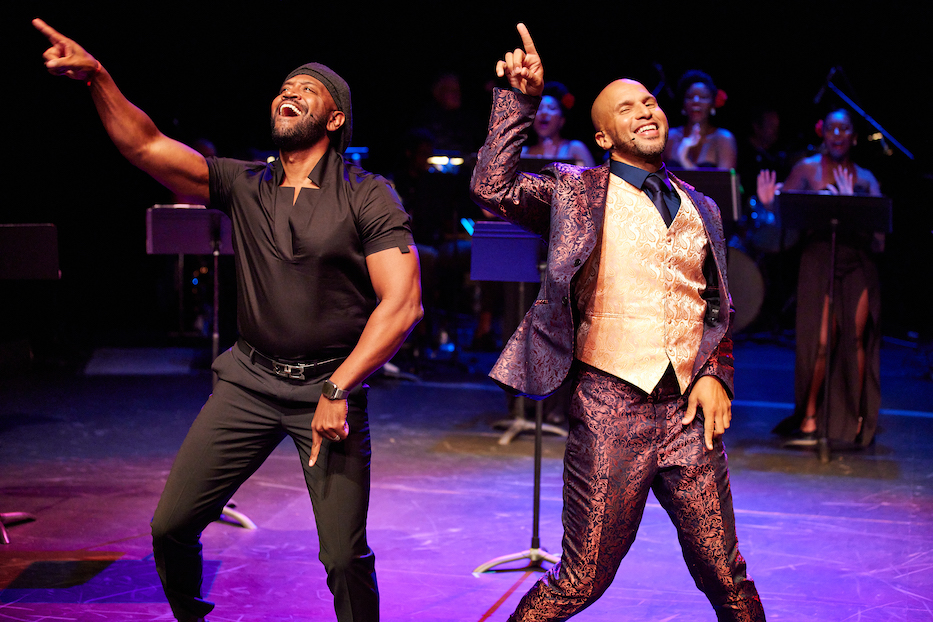 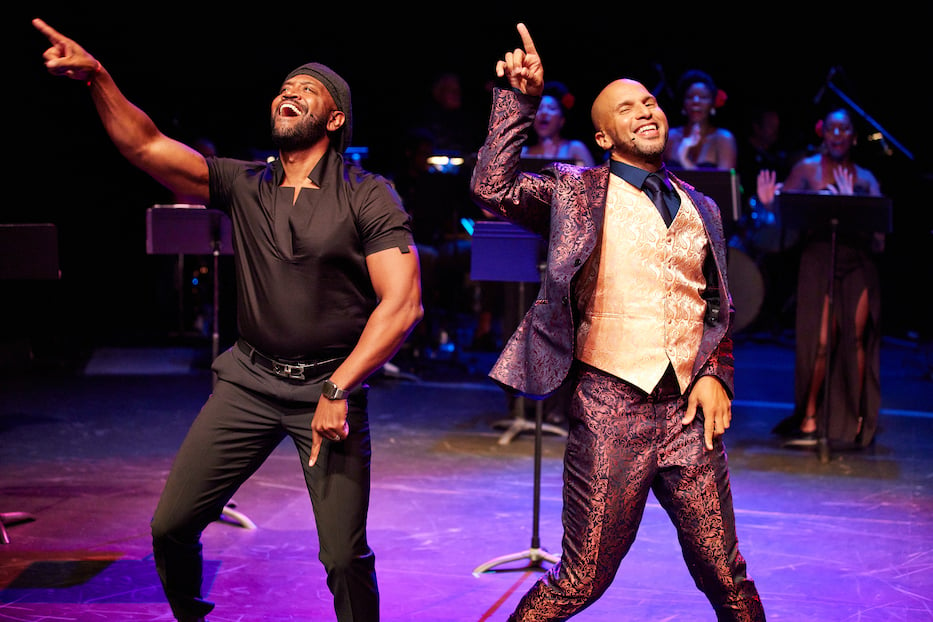 The Chimney Man launched the musical with a chilling cackle and the conviction of a preacher. As the piano sang an eerie tune, he spoke of people torn from their homeland, their pain a story told in music. He called upon messengers—Louis Armstrong, Duke Ellington—and then collapsed the thread with a rousing declaration.

A third name—Jelly Roll Morton—sat on the tip of his tongue. The audience held on to every word.

Chimney Man (Julian Rozzell Jr.) is a character in Jelly’s Last Jam, a concert reading of which graced the main stage at Long Wharf Theatre last Saturday and Sunday. Written in 1993 by George C. Wolfe and Susan Birkenhead with music from Morton’s life and work, the musical tells the story of Jelly Roll Morton (born as Ferdinand Joseph LaMothe), a late-nineteenth and early-twentieth century piano prodigy who declared himself the father of jazz music. Dennis Whitehead Darling directed the show.

On Long Wharf’s main stage, actors turned the concert reading into the right performance for this moment in the theater’s history, as it prepares to move to itinerancy later this year. In particular, the story was made easily digestible through vibrant music and high energy cabaret-esque dancing.

The final work in Long Wharf's 222 Sargent Dr. building will be a reading of Flying Bird’s Diary, written by Melissa Tantaquidgeon Zobel and directed by Madeline Sayet., on Oct. 22 and 23 Tickets and more information are available here.

“[It’s] the story of this tragic hero who's musically this stunning, flamboyant, charming prodigy of a piano player and composer that audiences love,” Darling said in an interview with the Arts Paper last week. “But you get a sneak peek of the failures in his life and his tragic flaw [which] in this case is his hubris [similar to] many Greek tragedy heroes.”

The musical traces Morton’s journey from an old, wealthy Creole family from which he was disowned to a game-changing career in jazz. Nicknamed “Jelly Roll,” Morton was a genius at creating complicated rhythms and counter melodies, Darling said. But in the musical as in his life, his arrogance toward other Black American musicians became fatal flaws. Born in Louisiana, Morton was French Creole, and often believed that made him superior to Black Americans, many of whom shared a history of enslavement and generational trauma. 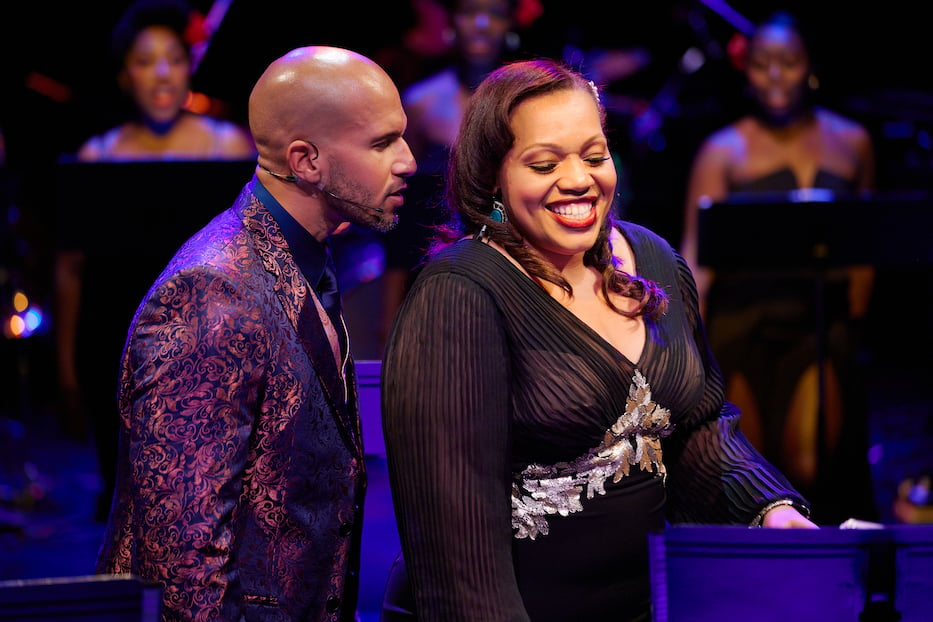 While the reading allowed for scripts to be used, actors were required to memorize certain lines and songs, Darling said. It meant that they were able to perform elaborate musical numbers without their books, and then return to them after the song was over. At one moment early in the show, for instance, cast members rushed onto stage in a flurry of dance and song. In sharp contrast to Chimney Man’s classy black suit and top hat, Jelly Roll Morton (Sydney James Harcourt) entered confidently in a patterned suit and sparkly silver shoes. Cleverly concealed behind music stands, even the books seemed to blend into the storyline.

It turned out that the concert reading fit the form. After its introduction to Morton, the musical places Morton in a state of purgatory, where the Chimney Man pushes him to relive his life. This guardian of the afterlife does not allow him to skip over the painful moments: Morton has to prove to the audience that he can be redeemed. Or as the Chimney Man says, “tell your tale and save your soul.”

For a show that requires the audience to put their trust in Jelly Roll’s redemption, the concert reading format proved to be the exact right move.

Darling brought in cabaret tables, choreography, and sound cues with the vision of delivering a performance that was somewhere in between a reading in its simplest form and a full theatrical production. Though the show was more dressed up than a sit-down reading, it fittingly retained the intimacy of one. The set was simple and constant throughout the show, with a live orchestra tucked in the back.

It enabled audience engagement to come naturally. In one scene, Morton behaved as if he were superior to Jack the Bear (Bryan Terrell Clark, who also played Buddy Bolden), a Black man who was also ostensibly his friend. Instead of apologizing, he continued to assert that he was better because of his Creole blood. When that cruelty continued in their next encounter, a cry of “hit him!” rose from the audience.

Similar moments were sprinkled throughout the show. When the vivacious Anita (Carmen Ruby Floyd) wowed with her voice, she garnered audience shout-outs of “sing it girl!” and “let it sing!” The show’s simple set and visible script reading allowed for a special intimacy. Audience members frequently interjected, sometimes even finishing an actor’s lines for them.

This element of audience engagement went hand-in-hand with the core of the story. Elaborate professional showings can often have the effect of feeling “stuffy” or strict, but this performance deemphasized the divide between the audience and the performers. Instead, the concert reading enabled the audience to exist on more even grounds, and through that, be closer to seeing Morton as human.

Jelly’s Last Jam gives the audience a chance to scrutinize Morton on his judgment day. Just as the production was not perfectly manicured, Morton too was a talented man with his own imperfections. At the heart of the reading, Harcourt was particularly adept at probing that divide.

“While heroes have these wonderful qualities that elevate them above the rest, they are still human and they all have their foibles and flaws,” Darling said. “And what's important is recognizing that and… finding redemption to then move on past those tragic flaws.”

In the end, while facing death, all Morton can do is follow Chimney Man’s instruction to “step forth.” He comes to acknowledge the “Black soil from which this rhythm was born” and feels remorse for his past arrogance. His realizations around white supremacy, racism, anti-Blackness and ethnocentrism may come too late to save him, but they do not for the audience. It’s one of the resounding messages of the show, no matter how intimately it is performed.

Long Wharf Theatre is similarly preparing for a step forward (although one very much in the world of the living); the reading marked one of the community’s last looks at the Sargent Drive building that has been the theater’s longtime home. As the company looks toward its transition out of the theater, the temporary, alternative format felt like hosting a house’s final barbecue for the neighborhood.

The show ultimately served as a comfortable gathering, while paying homage to the city’s long and historical love affair with jazz. And it showed that Long Wharf's doors, wherever they may be next, will very much be open.