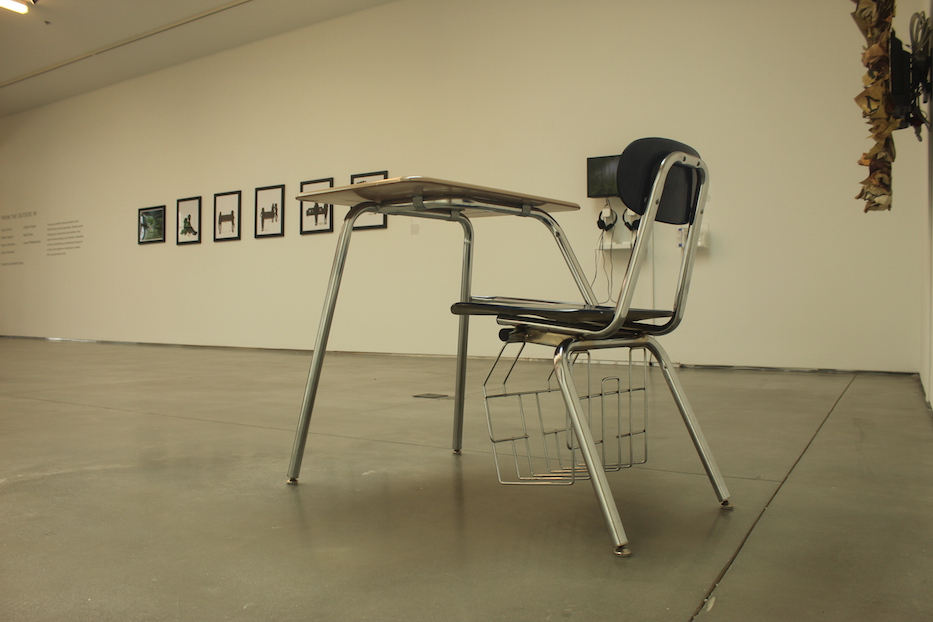 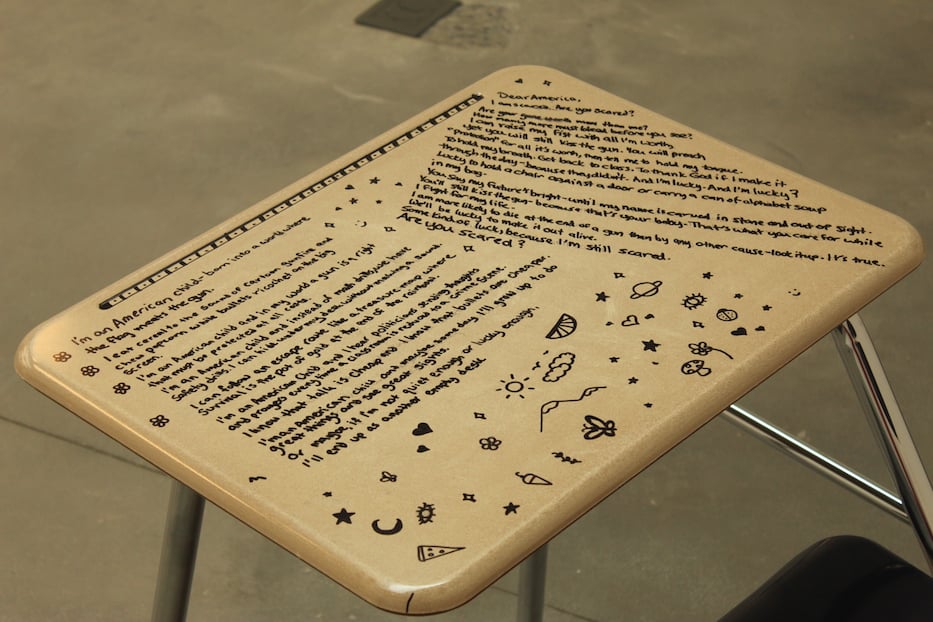 In the corner of NXTHVN’s gallery is a standard student desk seen in schools across the United States. Hearts, crescent moons, and butterflies dot its surface. Interspersed with the Sharpie doodles is a condemnation and a cry for help.

“I’m an American child and maybe someday I’ll see great things and see great sights,” the poem on its surface climaxes. “Or maybe, if I’m not quiet enough or lucky enough, I’ll end up as another empty desk.”

In American Child, a sculpture and poetry installation by Sereen Mezzane, the mundane is turned into a site of unrelegated and unrelenting violence. This summer, Mezzane is one of seven high school students and recent graduates to show her work at NXTHVN, where she is a member of the organization’s High School Apprenticeship Program. The program pays high school students from greater New Haven to create their own work and receive mentorship from the NXTHVN fellows and staff. Their annual exhibition From The Outside In runs through Sept. 4 of this year.

Curated by recent Cooperative Arts & Humanities High School grad Gabrielle Doctor, From the Outside In foregrounds the concerns of teenage artists on the verge of young adulthood, who face a myriad of adult-caused crises. The young artists’ calls for action remind the viewer of the weight of the racism, sexism, and mass violence on their young lives.

“Utilizing sound, photography, mixed media, and animation, they explore themes relating to self identity, vulnerability, and their understanding of themselves through art as they come together as individuals to express their nuanced views on life,” Doctor writes in the exhibition pamphlet. Lauren Wiedenmann’s video installation Are You Ready? continues Mezzane’s exploration of the expendability of young lives, particularly Black and Brown ones. Six teenage voices on a darkened stage cry out from the TV screen, performing the “Mr. Death” monologue from August Wilson’s Fences. In the video, the actors also perform excerpts from ​​Gem of the Ocean and Seven Guitars.

“You stay on the other side of that fence until you ready for me,” the lead teenage actor says, referencing the metaphorical barrier that the 53-year-old Fences protagonist Troy Maxson builds against a racist U.S. society bent on his death.

As the lead actor speaks, a cast of four others join her along the fence, shoulders squared, ready to confront death. Mr. Death’s identity is unstated. But to the cast of Black and Brown high schoolers, Mr. Death could be all manner of people and movements bent on their death: a police officer, a multinational oil company, the five Supreme Court Justices who overturned Roe v. Wade.

Wiedenmann’s choice to cast Maxson as a woman signals the leadership women have taken in social justice movements. Kaitlyn Higgins’ series of four mixed-media paintings, The Strangers Beside Me, centers on the premeditated and serial murder of women. Hung against a rectangular square of red paint is a Black woman, her eyes ringed in red, her face struck with terror.

Messages peek through the bottom layers of canvas: “No.” “I surrender.” “Help me.”

They are highlighted words from pages of the true-crime classic The Stranger Beside Me by Ann Rule, who knew Ted Bundy personally.

Across the space, the exhibit transitions to other concerns, none far away from the overarching theme of mortality.

In her six-print series titled The Connections Between Me, Ashlynn Topper renders her own figure and those of others with Photoshop. These youthful black silhouettes are bound to one another at the ankle by threads of various colors. Each thread represents a different emotion: blue for trust, pink for love, and so on.

The blankness of their silhouettes, coupled with the subtle color symbolism of each thread, casts a complex image of teenagehood, one filled with silence, gaps in communication, and limited visibility. Several paces to the left is Nelly Torres’ multi-media installation Faulty by Design, which reverses the conventional dynamic of the viewer gazing at the artwork. Rather, the artwork–a mixed-media stand-in for the artist herself–gazes back at the viewer. A face emerges out of a sheet of masonite, striated like the pixels of an LED screen. Animated eyes, cast from a TV monitor beneath the sheet of masonite, blink at the viewer. Crumpled and discarded rough drafts ring the sides of the face. The artist herself becomes a technological body of work, affixed to a wall.

The exhibiting artists’ creative use of technology culminates in Sofia Carrillo’s Hispanic Identity: Between Two Worlds. A pair of armchairs are weathered, strewn with pictures from a family archive, and stitched together by a United States and a Guatemalan flag. Within each chair, Carrillo has embedded audio files of her family members speaking; the viewer can pick up a plastic landline receiver and listen to them. These ordinary objects become a technology for the transmission of her family’s nuanced migration story. 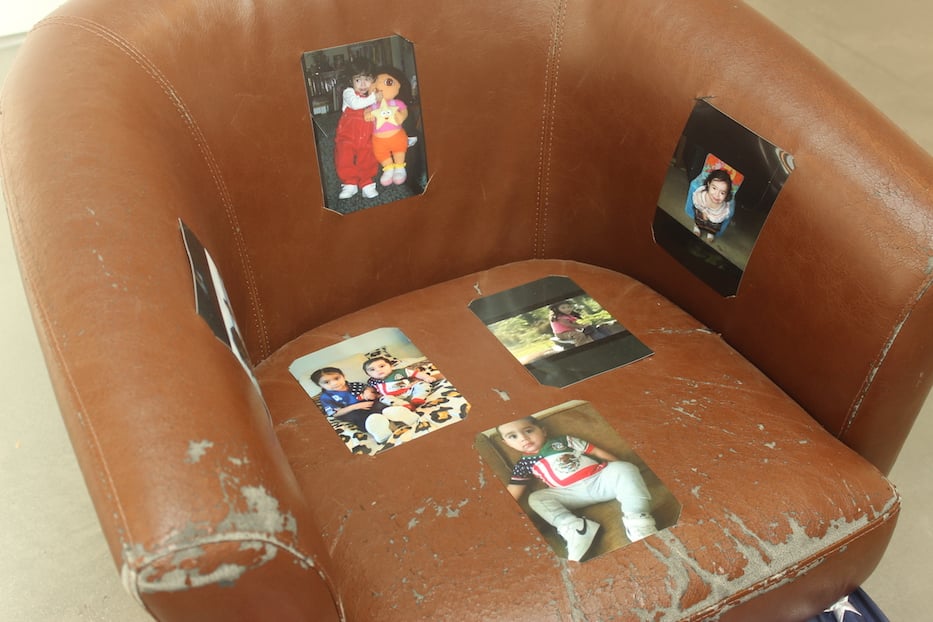 From The Outside In runs through Sept. 4 of this year. Click here to apply to the  NXTHVN High School Apprenticeship Program. Applications are due by August 19, 2022