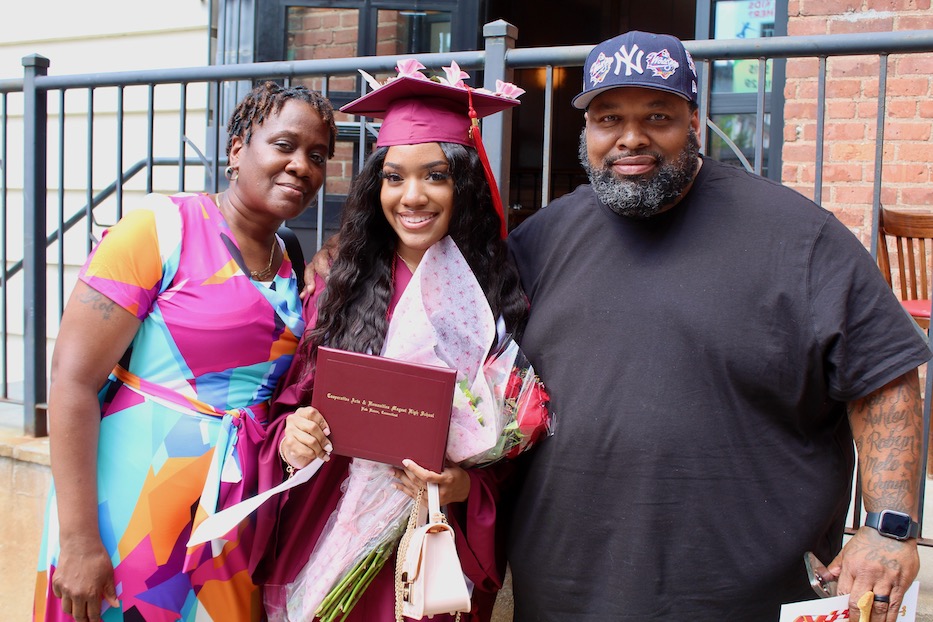 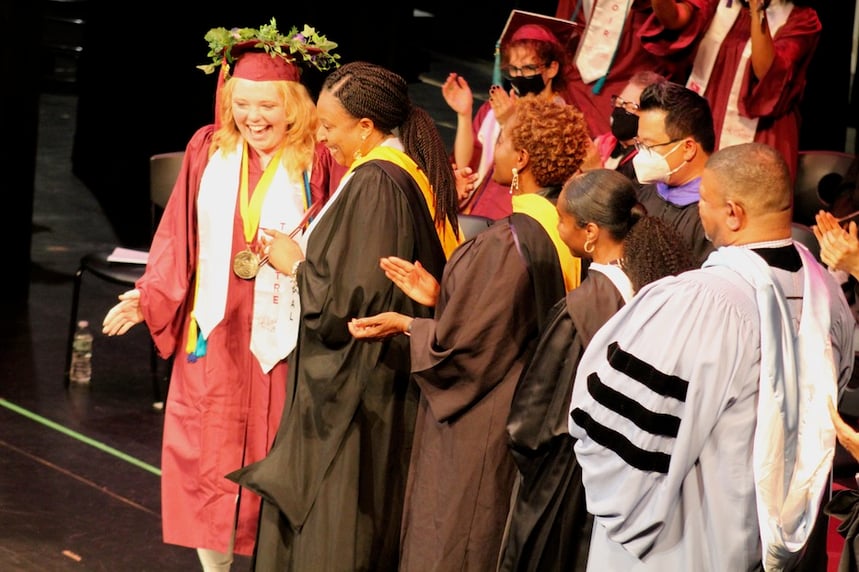 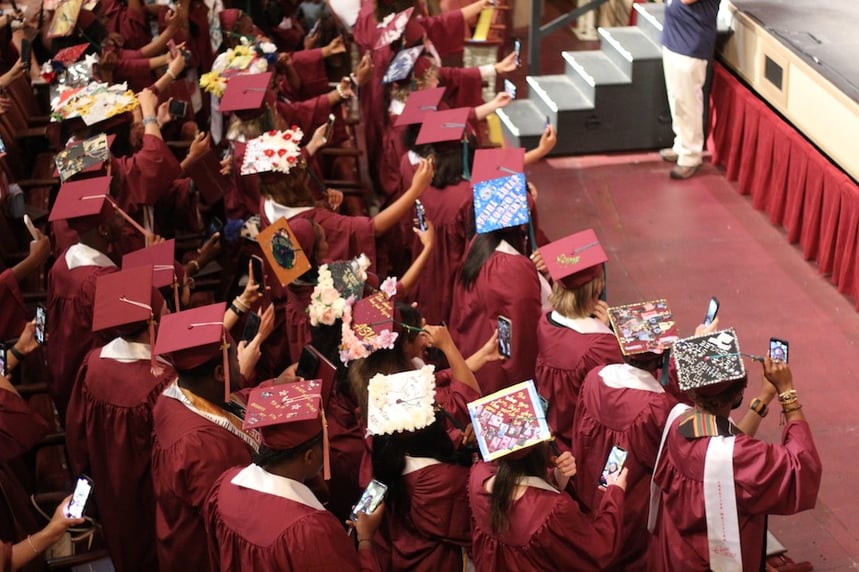 Lauren Weidenmann helped orchestrate a multi-part play from her bedroom. Krystal Erazo transformed her living room into a makeshift dance studio. Danielle James-Vuolo turned to her pens and paints, and fought isolation one brushstroke at a time. Robyn Davis waited for the day she could step back onto the stage, unmasked. When it came, she savored the spotlight.

They mourned together and apart as grief upended their lives over and over again. And somehow, they all made it through.

Friday afternoon, they were four of the 122 seniors to graduate from Cooperative Arts & Humanities High School in a ceremony held at the Shubert Theatre on College Street downtown. The graduating class includes award-winning actors, teenage webseries hosts, lifelong church musicians, Ailey-ready dancers, artist-activists and creative writers whose words against gun violence have graced the U.S. Capitol. 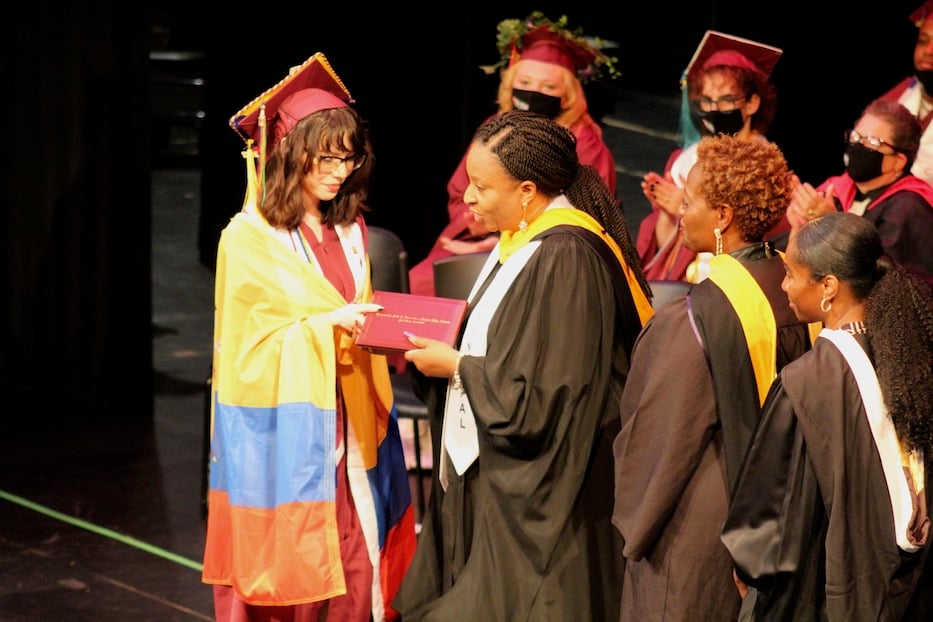 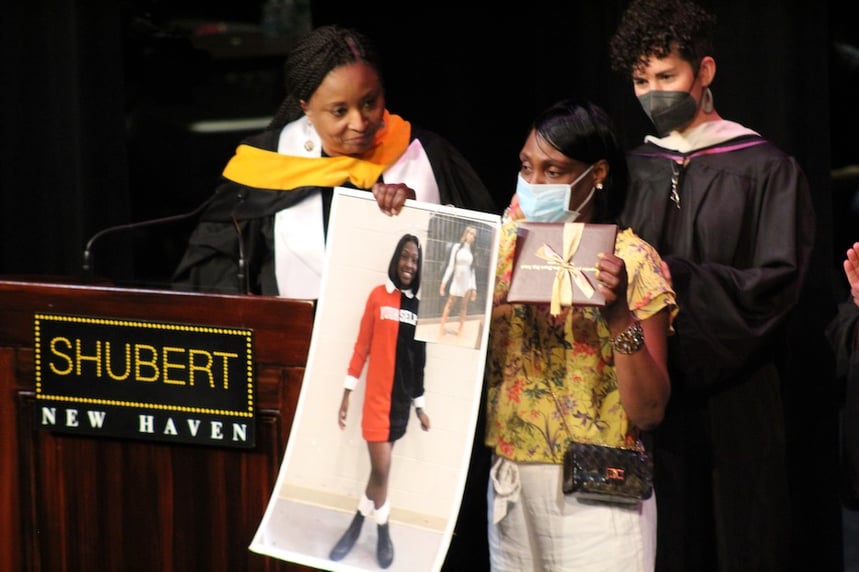 For many of them, their studies in visual arts, music, dance, theater, and creative writing became a lifeline as the Covid-19 pandemic hit New Haven, and turned the fine and performing arts into a remote experiment for over a year.

Friday was also bittersweet: students and faculty honored the memory of classmate Camryn ​“Mooka” Gayle, an effervescent dancer and cheerleader who was killed in a car accident last November.  When her mother, Elizabeth Robinson, came to the stage to collect her diploma, the cheers and cries of “Mooka!” and “We love you!” were so loud and laced with grief that one building could not possibly contain them.

“We have the unique, if morbid, advantage of already knowing at 18 exactly how much we can survive,” said Valedictorian Lauren Wiedenmann, a theater student who wrote every single one of her college essays about the healing power of art. “So let’s do more than that. Let’s thrive … what we have here is magic.”

Throughout both the graduation ceremony and a sun-soaked, impromptu celebration on College Street, speakers, staff, and graduates all paused to reflect on what a strange four years they had weathered together—even when together meant physically apart. In a ceremony that lasted nearly two hours, it gave students the chance to laugh, cry, get rowdy, and take selfies together one more time before they went their separate ways. 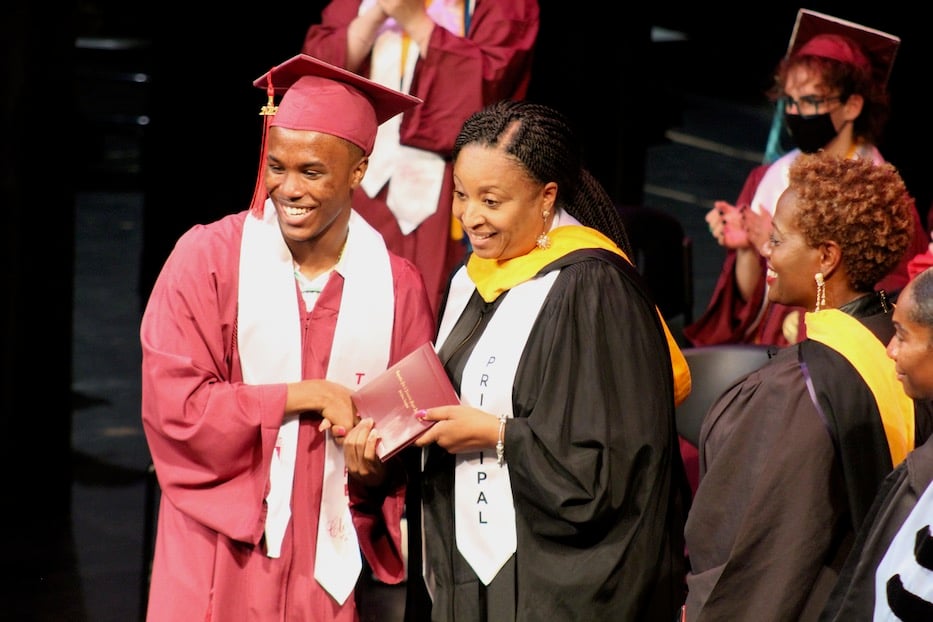 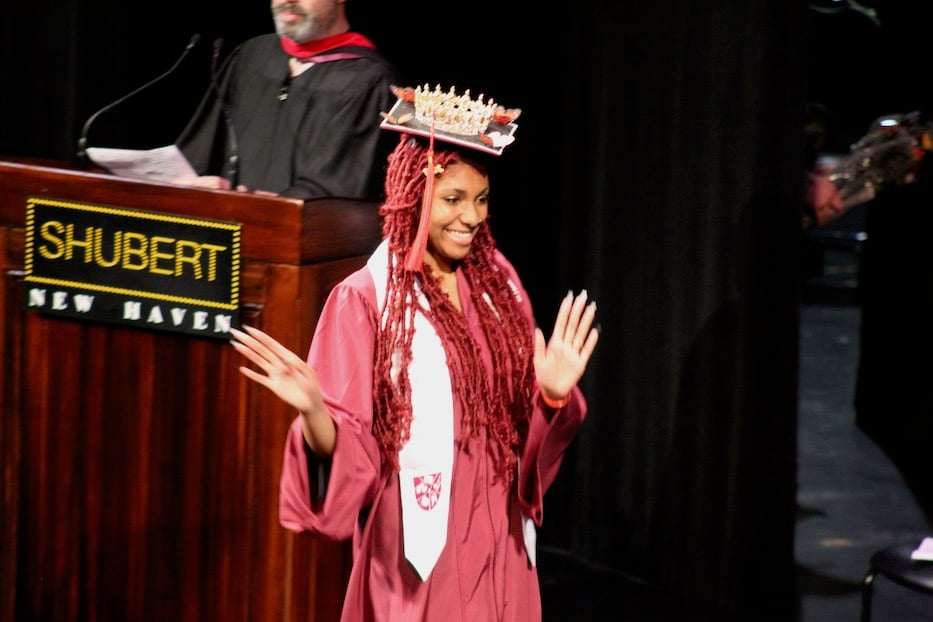 To full, ringing laughs, salutatorian and creative writer Piper Zschack recalled how he’d asked his peers to describe Co-Op in a single word when preparing for Friday’s speech. Answers ran the gamut: students dubbed it “invigorating, diverse and exceptional to confusing and trying.” One left it at "an experience," Zschack's deadpan delivery of which got the theater buzzing. The word that stayed with him, in discussion after discussion, was “metamorphic.”

At Co-Op, the word doesn’t feel coincidental or happenstance: it is tied to the school’s literary magazine and Creative Writing program, from which Zschack himself first read work aloud four years ago. It connotes the constant and necessary state of shifting and growth that students done to get to this very moment.

“Entering the building as tiny, wide-eyed freshmen who fought too much, talked too loud, and didn’t take classes seriously enough, we’ve grown exponentially in each others’ presence,” Zschack said. “Co-Op will be defined in my memory as a home and a family, an environment in which to metamorphose.”

That can be true of their futures too, Zschack said. Where the New Haven Public Schools district may have lacked resources, it made up for in students’ lived experiences “and the knowledge of how to thrive in adversity.” Even as students grieved—canceled performances, profound isolation, and the unfathomable loss of one of their own—they held each other up. In particular, Zschack praised fellow seniors for creating peer-led networks of support like those that existed before the pandemic. 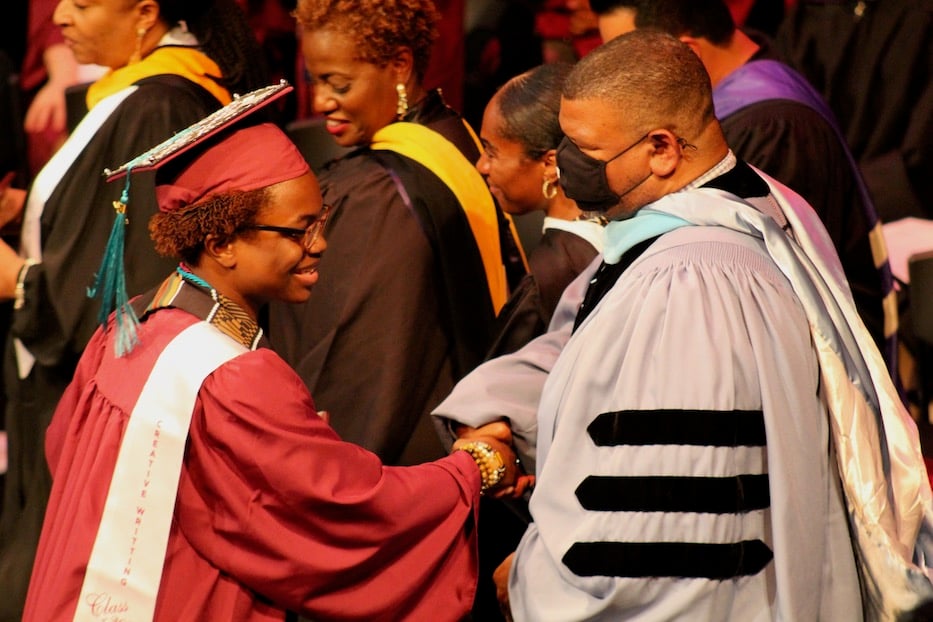 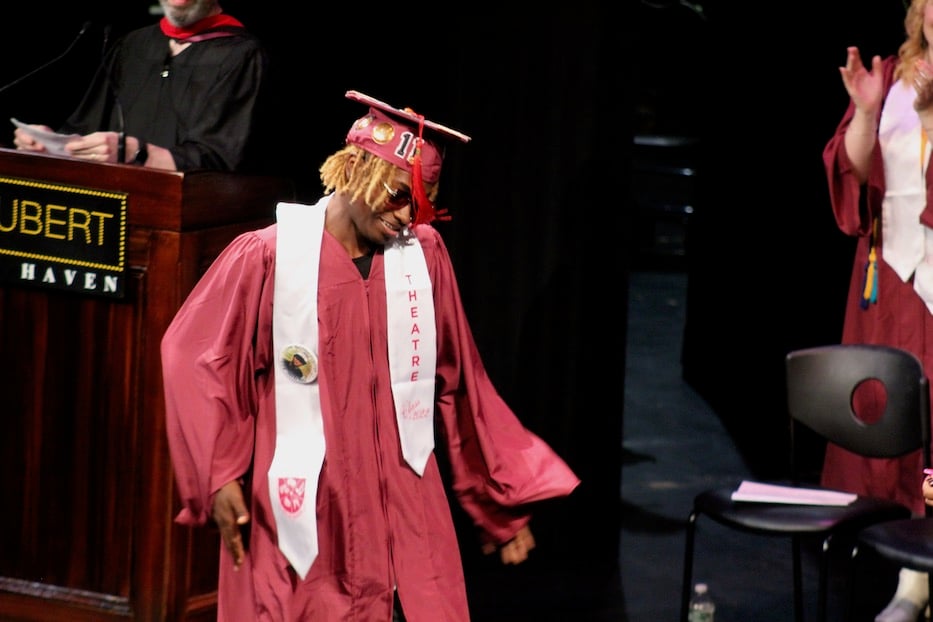 Top: Creative writer Ajibola Hakeem Tajudeen III, who is headed to Berklee College of Music in the fall, with Assistant Superintendent for Instructional Leadership Dr. Paul Whyte. Bottom: Some students danced their way across the stage.

“Today marks a different state of transformation for each of us,” he said. “Whether we’re going to college, trade school, entering the workforce, or don’t know where we’ll end up, we are exiting one phase of our lives together, and entering proudly into the next … it marks a broadening horizon.”

Weidenmann, who will head to Emerson College this fall, looked at how her classmates had learned to adapt over and over again—starting with the 177 College St. campus itself and going through the pandemic. When they didn’t have an outdoor space to call their own, students claimed Temple Plaza. They rolled with spotty WiFi and sputtering-to-dry drinking fountains. They parked on unmetered sidewalks and collectively fumed over the lack of a parking lot.

In other words, “we got nifty,” Weidenmann said. “We were urged to utilize our imaginations and be creative. Not to be constrained by the lack of props or a set, but to make do with what we have. We didn’t have much at our disposal, but it didn’t matter. We didn’t need much.” 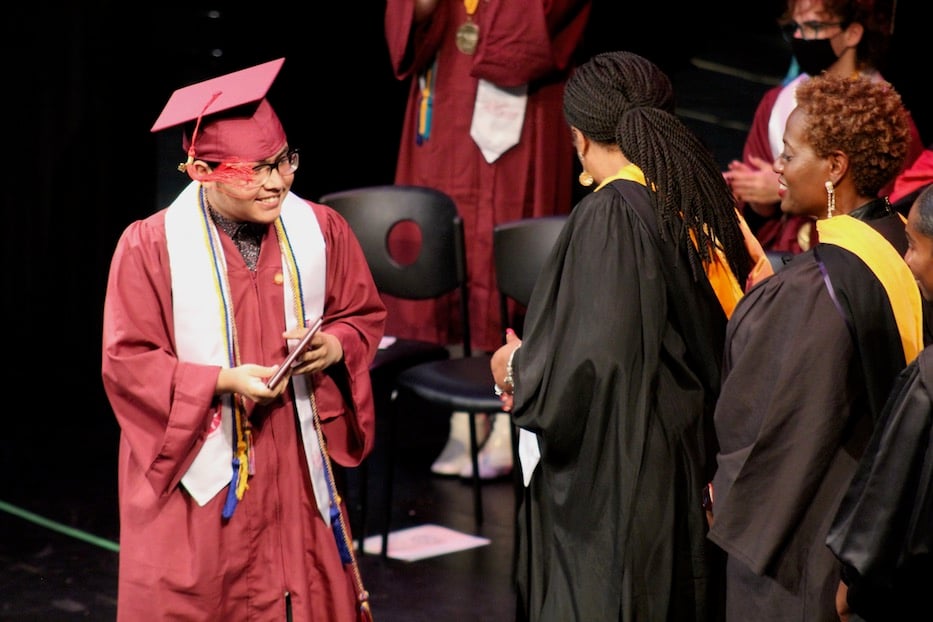 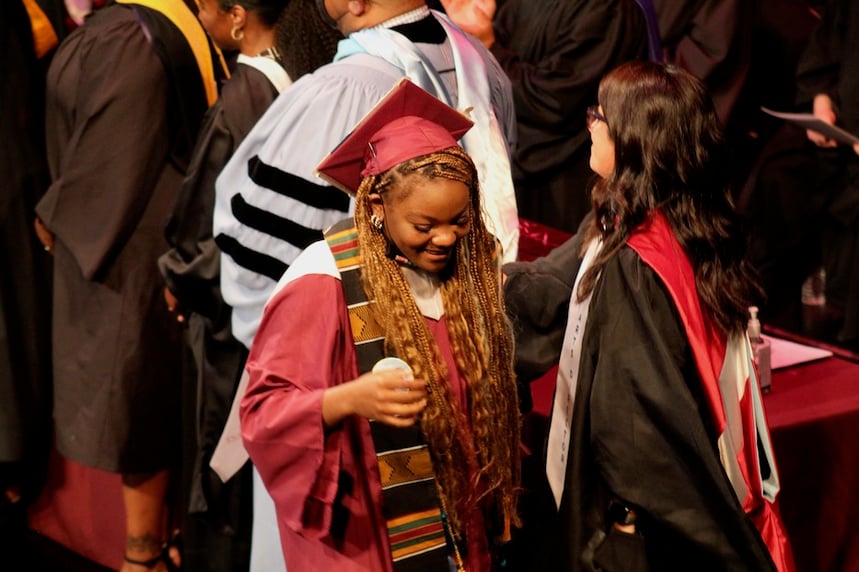 Weidenmann and her peers saw that resilience time and time again. When the pandemic pushed classes online two years ago, band concerts turned into Zoom rehearsals and muti-track recordings. The school musical went online while theater classes turned to the mailbox for inspiration. In the midst of intense isolation, she reminded them, students marched for Black Lives Matter and raised their voices against climate change. When they finally got back to school, they worked to navigate a new normal for the best senior year they could have. She imagined the school as a stage, and the students as actors.

“A few wooden black boxes might be used to make a radio station, a chapel, or a ballroom,” she continued, referencing both the school’s return to in-person theater and seniors’ final play project. “With something as basic as changing jackets over all black clothing, we could easily move from one character to another.”

Friday, Weidenmann said that she got through one day at a time, which is a philosophy that she still carries with her (she estimated that she wrote the valedictory speech 100 times "before I got it right"). Through it all, the arts kept her and many of her peers going.

They have also weathered tragedy together. Their senior year, “just as we were hoping to bounce back,” Gayle’s death shook the tight-knit school community. When Weidenmann said her name, applause filled every square inch of the theater. From the first rows to the balcony boxes, students and friends called out her name and cheered. Mortarboards with her name and picture appeared where students sat in the front rows. 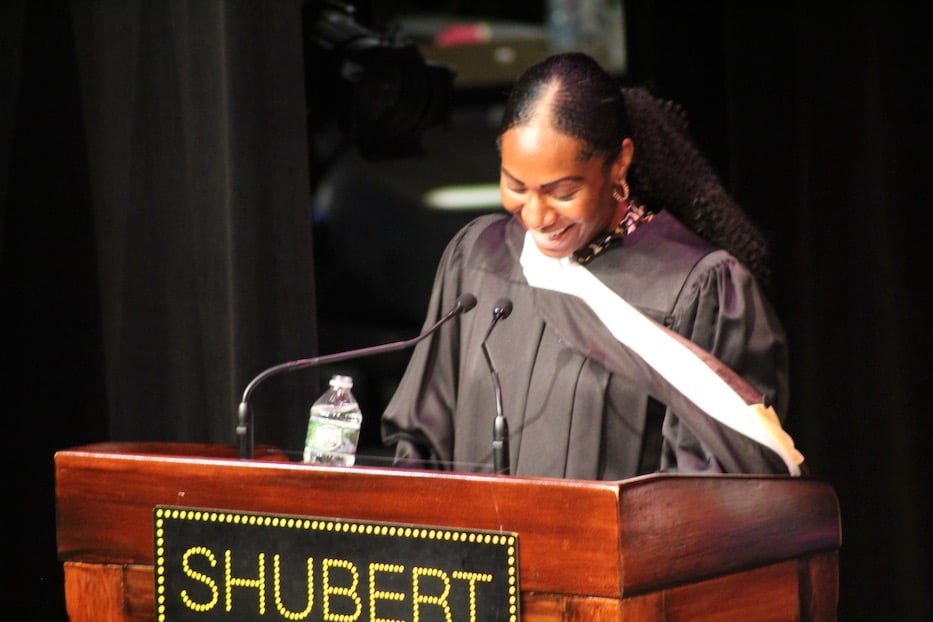 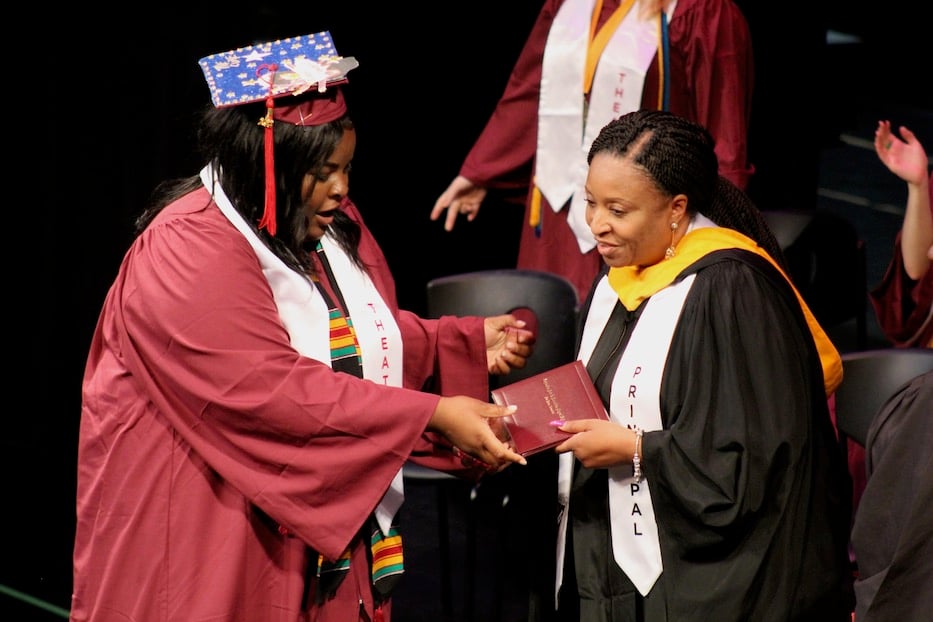 Looking to seniors’ bright future, city Cultural Affairs Director and keynote speaker Adriane Jefferson praised the class of 2022 as “culture shifters,'' encouraging them to show up as their full selves as they leave high school, and head out into the world. For the past three years, she’s watched young people take to the streets, push for more robust mental health and arts funding, and build communities of care in their schools, homes, and neighborhoods.

“Life is gonna life,” she said. “And when life starts life-ing—it will—and when things seem hard, when you feel defeated, when you’re not sure that you’re doing enough, when you just don’t know, I want you to remember that you are a culture shifter, and the power of revolutionary transformation is literally in your DNA.”

She is a living example of that, she added: Jefferson chose to attend the Savannah College of Art and Design for her studies, despite protestations from peers and family members. She is now nationally recognized for her work in cultural equity and anti-racism in the arts. “The arts saved my life,” she said.

For students who are perfectionists and planners—vocalist Rachel Kearse, who sang the national anthem and already has a plan of study mapped out at University of Connecticut, seemed to blush from the stage—she urged them to let themselves be a bit more flexible. For students who have never made a plan and take it one day at a time, she encouraged them to “try to plan,” just to get the feel for it. The line drew a wave of laughter in the packed theater.

“The truth is, we don’t  know what life is actually going to throw our way, and we don’t know how our plans might be derailed because those things are not often in our control,” she said. “There are a lot of things not in our control … but we do get to decide who we wanna be and how we want to show up.” 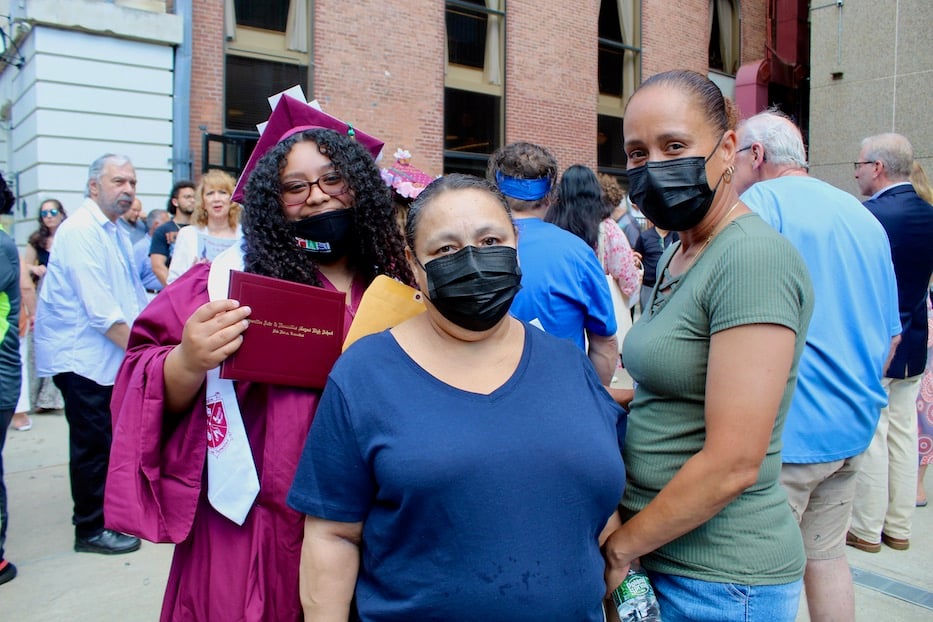 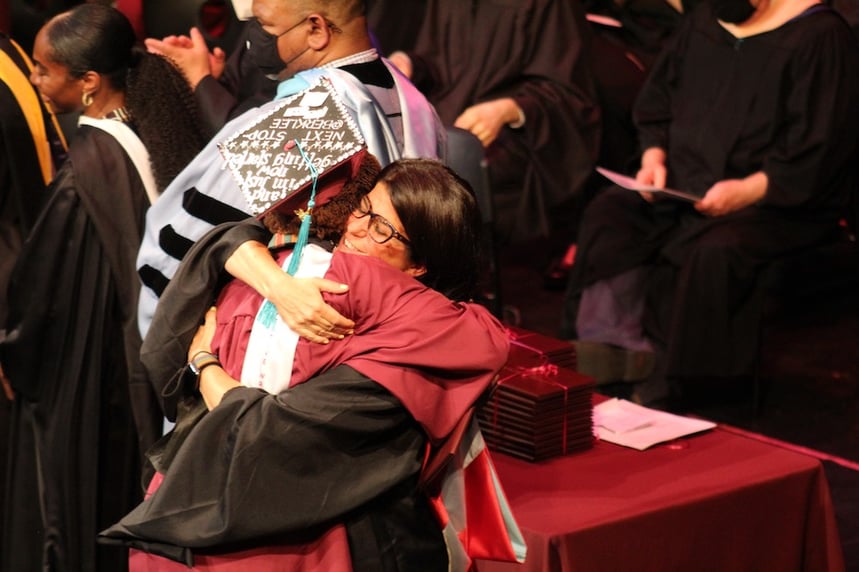 Top: Dancer Krystal Erazo with her mom, Maribel Erazo, and grandmother, Aida Rosas. Bottom: Arts Director and Assistant Principal Amy Migliore: "You created in spite of your losses. You wrote in spite of your defeats. You pulled yourselves up, out, and all over to shine," she said, adding that she cries at every single student performance. "You all are the reasons many of us show up every day."

As families congregated outside the theater, students streamed out into the sunlight, snapping selfies as they milled around and bid farewell to their classmates one final time. For many of them, it has been a tumultuous journey to the finish line—with a senior year that was not what they expected when they arrived at the school in 2018.

Krystal Erazo, a dance student who will attend the University of Connecticut in the fall, called Co-Op “a good high school experience,” with a difficult few years in the middle. When Covid-19 hit, Erazo struggled with “a lack of motivation” to attend online classes. To keep herself moving, she turned her living room into a dance studio.

“It was a challenge to dance in such a little space,” she said, adding that dance instructors Lindsay Bauer and Christine Kershaw were particularly influential in helping her get through.

“Coming back, it was amazing,” she said. 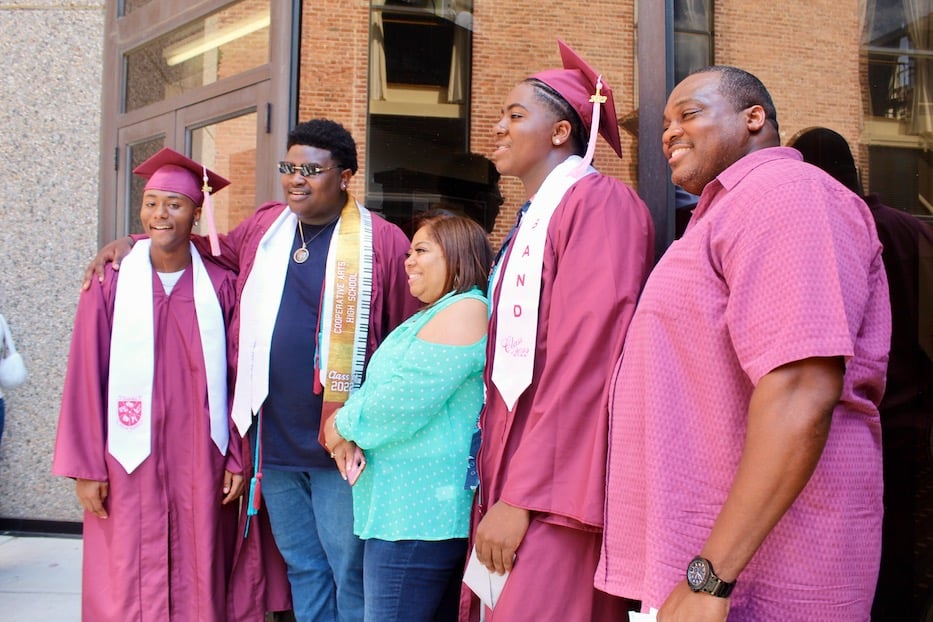 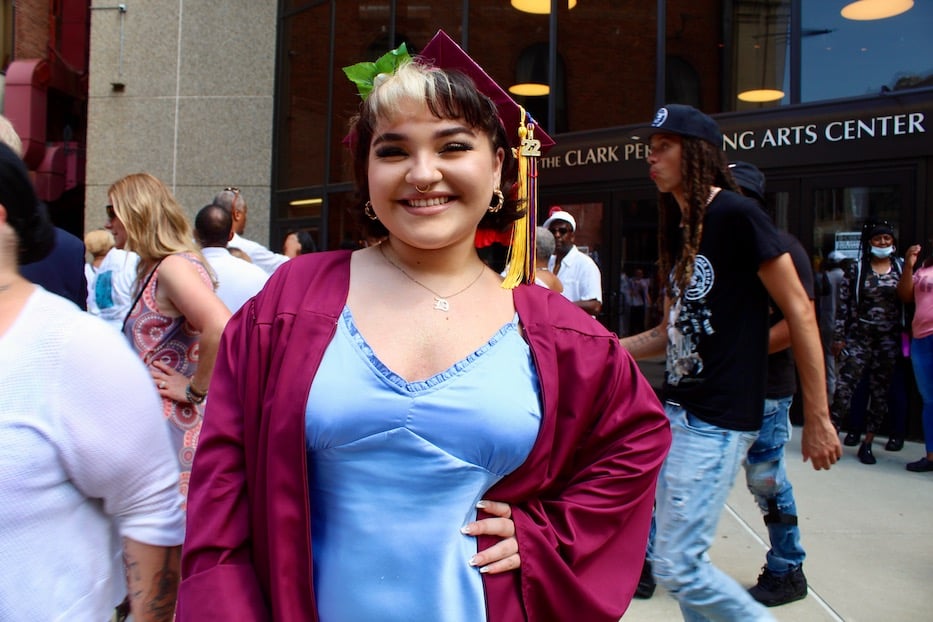 Stopping for photos beside the theater, band student Vincent White said that the school had helped him grow as both a student and a musician. His sophomore and junior years, “I was cut off,” he said. He missed his friends. When he returned, “I didn’t expect people to be as excited to see me” as they were, he said. He was just excited to see them, too.

At Co-Op, he’s grown his love for drums, bass and keys under the tutelage of teachers Patrick Smith and Matthew Chasen, both professional musicians themselves. “When you play, it helps you flow from different angles,” he said. 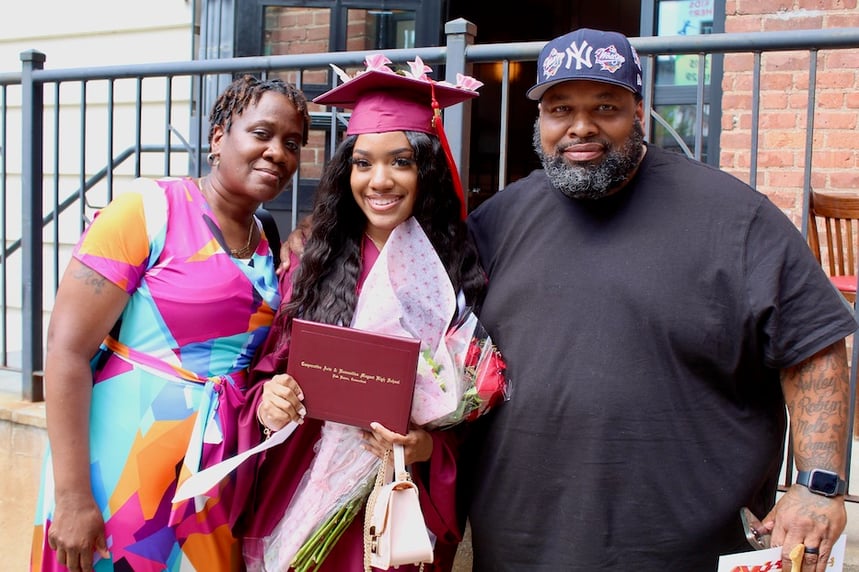 Robyn Davis (center) with her parents, Katina and Robert Davis.

Across the sidewalk, theater student Robyn Davis posed with friends and family members, her smile filling phone screen after phone screen. When she entered Co-Op four years ago, “I didn’t really know who I was,” Davis said. She started her high school career at James Hillhouse High School, and then transferred into the school just a few weeks into her freshman year.

What followed, particularly during the pandemic, was “a roller coaster ride.”

Like many of her peers, she struggled with the isolation of lockdown, and the sudden inability to see her friends. They got through it with FaceTime, texting, and constant support of each other, she said. Meanwhile, she kept logging onto classes, making her way through remote learning.

“Coming back was awesome,” she said, calling her final year “semi-normal.” Of Co-Op, she added that “I really feel like it helped me find out who I was.”