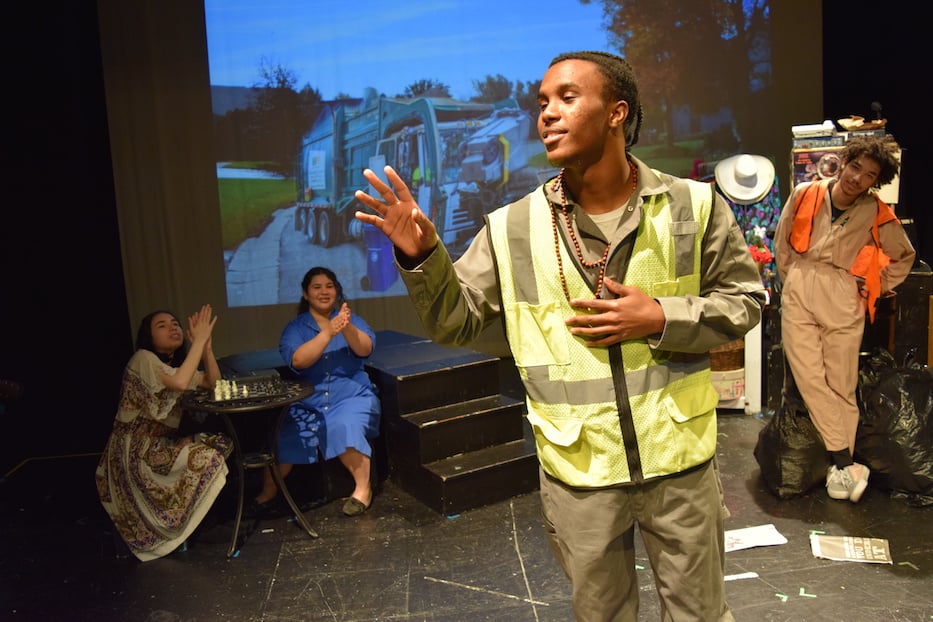 The bird glides over the city, its silver-tipped wings outstretched and glinting. In the park, two graying abuelas sit across from each other at a chess board, dreaming of dancing in the night away in Paris. The garbage collectors down the street lift heavy black bags and sketch out a more sustainable future. In a school building somewhere nearby, a math joke floats into the air, and feels like a miracle. The bird dips toward the earth, visible for a moment, then flies for the clouds.

Does it even exist? Does it matter?

Twenty-eight high school seniors, one playwright, two drama teachers and a village of educators and parents asked that question last week, as The Magical Freaking Bird landed at Cooperative Arts & Humanities High School as the annual senior show. Written by a.k. payne with members of the class of 2022, the work tells the story of a city and its residents, who begin to talk about a bird that can grant wishes if it is captured and grounded. It is the first time in two years that seniors have been able to perform in person.

“It’s a blessing to be able to work together in person for the first time in two years,” director Robert “Espo” Esposito said last Thursday night to a totally full house. Beside him, fellow director Christi Sargent beamed before jumping in with her own words of encouragement.

Set in a midsize city dubbed “the ​​98015,” The Magical Freaking Bird follows two dozen city residents as they reveal their dreams and wishes in city streets, sprawling parks, obsessively well-kept classrooms and a cluttered, closet-sized radio station. There are the sharp-tongued grandmothers who play chess in the park (Janelly Nieves-Colon and Sofia Carrillo), the trash collectors who imagine a kinder, cleaner world (V. Rodriguez and Jaizir Feliciano), a crestfallen math teacher (Nina Grim) and rough-edged physics instructor (Emma Hatjopoulou) who might reach some kind of equilibrium if they could just talk to each other.

The longer someone spends there, the more familiar the ​​98015 seems. Audience members meet boutique owner Lola (Emma Desanti), a champion of all bodies, roll right into “Cool Guy” (Tain Gregory) a quirky skateboarder with a combative streak, and listen to the high school cynic (Robyn Davis, aptly named Charisma in the show), who may turn out to be right about everything. At the town’s beating heart is Morgan (Christopher Cazarin), the friendly drivetime radio host who wants to know who has seen the bird, and what residents would do with the ability to make a wish.

In his perennial chip-munching and cheeriness, there is a quiet kind of resistance to the city-owned station on which he appears.

“I think everyone deserves to have their dreams come true,” he says into the mic, his voice carrying across the city. 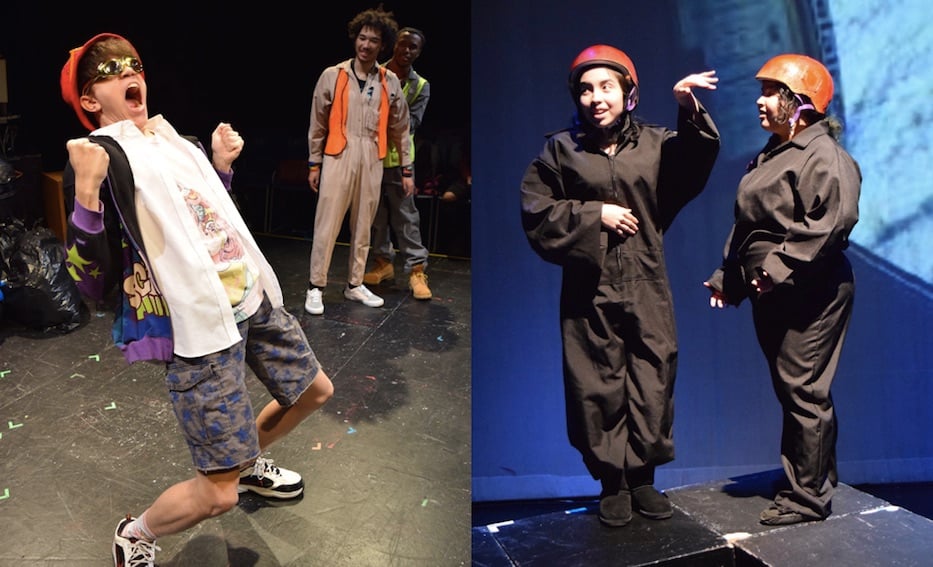 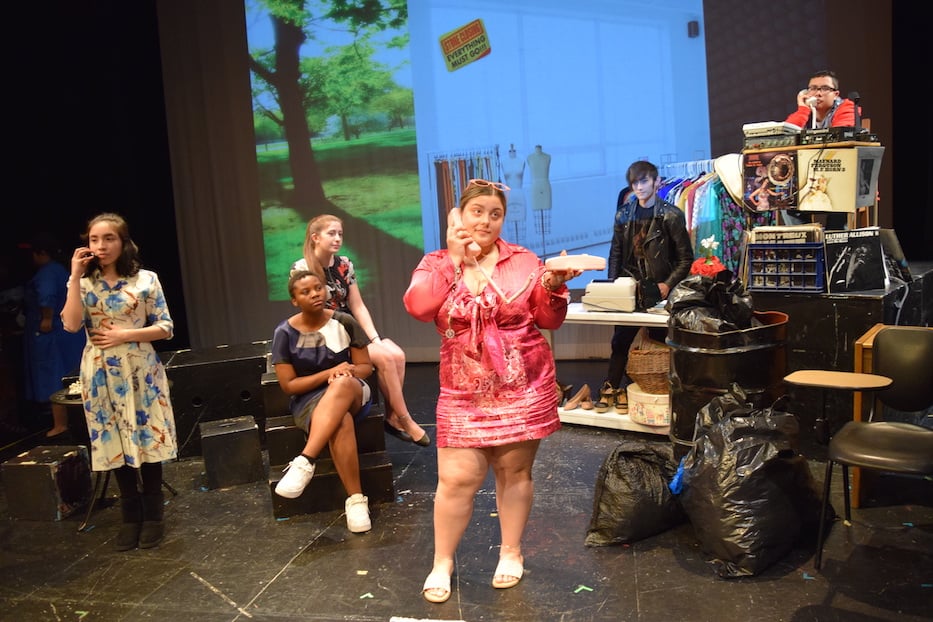 payne’s world, done smartly in a series of vignettes, spins and swells on its gentle axis. The 98015 is not New Haven—in real life, that zip code belongs to King County, Wash.—but it feels like it could be. Freddie the garbage man is so sensitive to waste and excess that you expect him to tear off his yellow-and-grey vest, and walk right into a New Haven Climate Movement protest. In the 89-year-old Mildred and Milagros (Nieves-Colon and Carrillo), there’s an analogue to the old folks playing pickup chess at the downtown library, or better yet, dominoes in Criscuolo Park. That the second is named for a miracle feels right in this city where even wishing is intrepid.

When Lola walks onto the stage and completely owns it (props to a six-person costume team), she channels New Haven collectors like Melissa Gonzales and Ashleigh Huckabey, who include plus sizes in their second hand stores. Even the mayor (Jesly Lopez) seems to have taken a page from the Elm City as she stomps impatiently across the stage, holding fast to a single-minded, competitive grip on power that's completely off kilter. Lopez leans into it, exploring the evil in her character's unwillingness to bend or listen.

Students nail the roles, reminding their audience how to dream as they mix self-conscious humor with a wisdom that is well beyond their years. When Feliciano says that “I’d make landfills into solid mountains,” his arms become balletic, as if they are climbing towards that cleaner future in real time. Milagros, who Carillo and payne have written with great poetry, wants to skydive and free fall and dance in Paris “until our knees have turned to pudding,” and her words make it feel possible until it is. Jones may be moping over an ex-girlfriend, but in equations he is able to see an entirely different universe, where smiles and dad jokes are entirely within reason.

Even one-time callers are written as fully formed people, from a tinfoil-hatted conspiracy theorist to a cackling “Wicked Witch” dressed in black from head to toe. One, voiced by a domineering Lauren Weidenmann, includes a dig at Apple Customer Support will never not be timely.

Together, it's a master class in imagination. Cazarin, who started his acting career at Co-Op four years ago in The Curious Incident of the Dog In The Night-Time, holds everything together from his tiny studio, built smartly as a perch above the city. As his Morgan powers up the airwaves and takes calls, the Magical Freaking Bird becomes something different to everyone. For Lola, it’s that which would save her store, fittingly named “The Free” in a town that does not feel liberated. For Mildred, it’s a long lost love who she’s still pining over. For Charisma, it's a world where people believe in themselves and each other.

When Morgan knocks the fourth wall down and walks onto the stage, his words—that “I’ve always believed in the beauty and potential of this town”—hang low in the air. This is some version of the homegrown, grassroots community leader we in the audience all know, heroic in how very unassuming he is.

payne and students are also punchy, poking holes in the upside-down-ness of the past two years. At one point, Jones sullenly asks their ex-girlfriend Kendall (Victoria Mora) “So you’re a fortune teller now?” It’s meant to be simmering and sarcastic, but Kendall takes the bait. “Yep, I took a class on Zoom,” she answers, to a collective eye roll that follows. At another, Mildred names the pigeons who pool around her feet, sometimes forgetting who is who. There’s a strange loop that seems right on time—not because she's having a senior moment, but because this is the third calendar year of Covid-19 and time and memory have become completely fungible.

Back in person, students have taken advantage of the stage and surrounding black box, using the entire space to tell this story. A projections team (Rachel Kearse, Autymn Brown and Naiyara Diaz) and sound designer (Ajibola Tajudeen) add birdsong, cawing, ringing phones, and a clean, economical black-and-white version of a bird flapping its wings over the town. Co-Op teacher Janie Alexander and her design students have brought it to life with a set that includes benches, stairs, bloated black trash bags and racks of vintage clothing. By the end, the 98015 is a whole universe, and it is inviting the audience to find themselves in it. 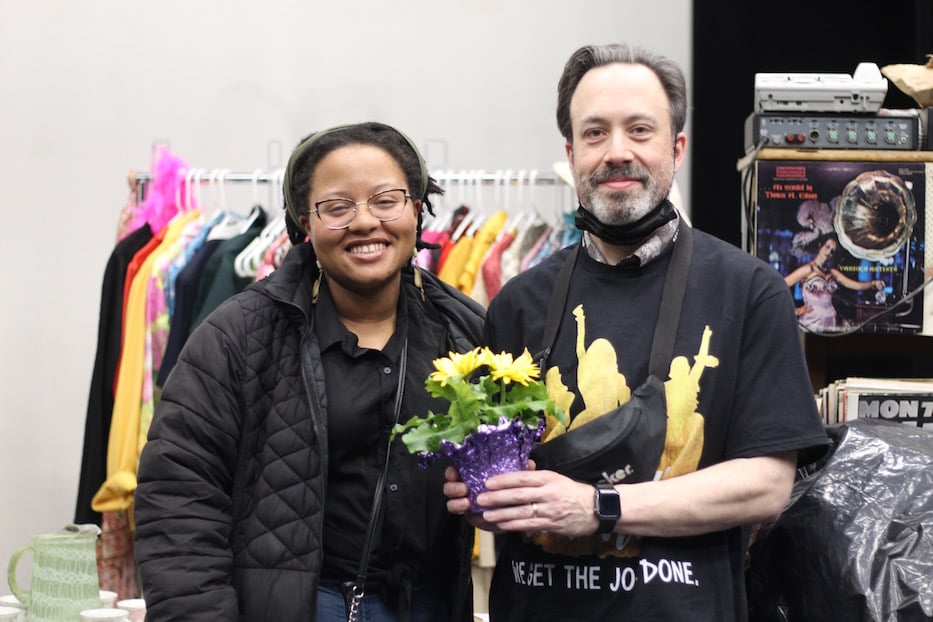 In part, the characters feel so real because the students helped write them into being. After meeting Esposito in 2020, payne began working on the play with seniors last November, in a number of virtual meetings that transitioned to in-person sessions the closer the class got to performance. By December, she had formed a seven-person writing team with students, who met with her weekly on Zoom. She asked all of them the same question: “How does the bird affect this town?”

The answers, along with student feedback, built the characters in the show. After students’ winter break, she and the students started playing with scenes and world building. Along the way, she continued to ask questions. She drafted characters based on student input (that’s how she got to Cool Guy, skating in in his Spongebob T-shirt and double-stacked sunglasses).

“How does this town operate?” she said at a performance last week. “How do the people in it care for each other and dream together?”

The group had a working script March 16, giving students just over a month to memorize and rehearse the play. Both she and Esposito estimated that 20 percent of the script comes directly from students (writers include Carrillo, Gregory, Cazarin, Robin Davis, Gabrielle Doctor, Nieves-Colon, and Weidenmann). payne, who grew up in Pittsburgh and has spent years in New Haven at the David Geffen School of Drama, said she thought about the city as she and students wrote.

Even offstage, The Magical Freaking Bird feels written for this moment. It takes place four years after some of the same actors walked into the black box theater as baby-faced freshmen, and two after a global pandemic upended their sense of normalcy. In between, the class of 2022 has coped with deep loss, pivoted to virtual and mail-in playwriting, and made the leap back to in person school. They’ve helped underclassmen find their footing in a school musical and gotten college acceptances that make the world feel big. They have simply kept believing.