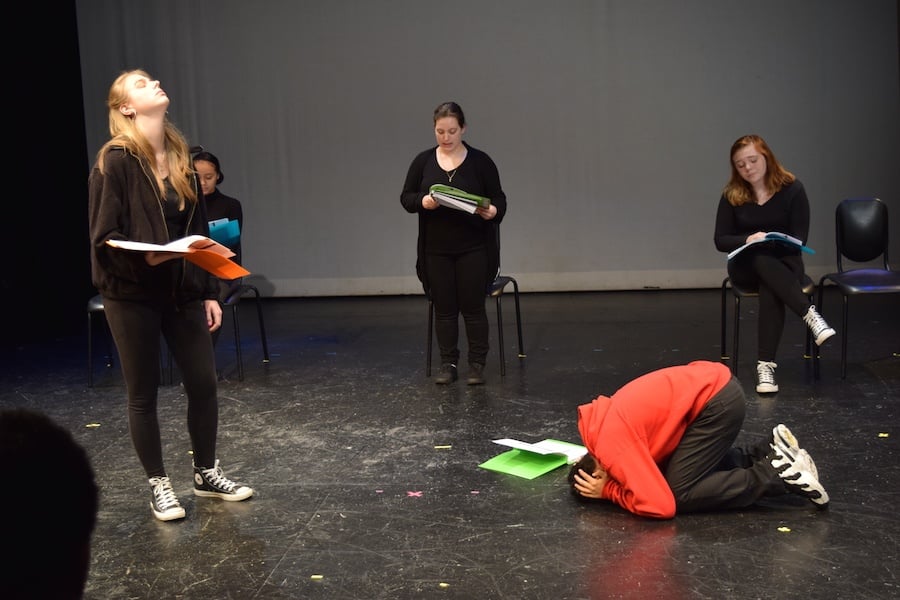 Christopher Boone is center stage, red sweatshirt rumpled, hands over his ears. Across from him, his neighbor glares, raising her voice. Boone lowers himself to the ground, scrunched into a ball. As the world closes in, he begins to groan softly. Forehead to the soil, like an earthy kiss.

Boone—Co-Op freshman Christopher Cazarin in real life—has been living at the center of Simon Stephens’ The Curious Incident of the Dog In The Night-Time, the first of three scripts to come to life at Co-Op’s first annual plays festival this and next week. Then drama students and teacher Rob Esposito will be back with Lin Manuel-Miranda’s In The Heights in the spring. 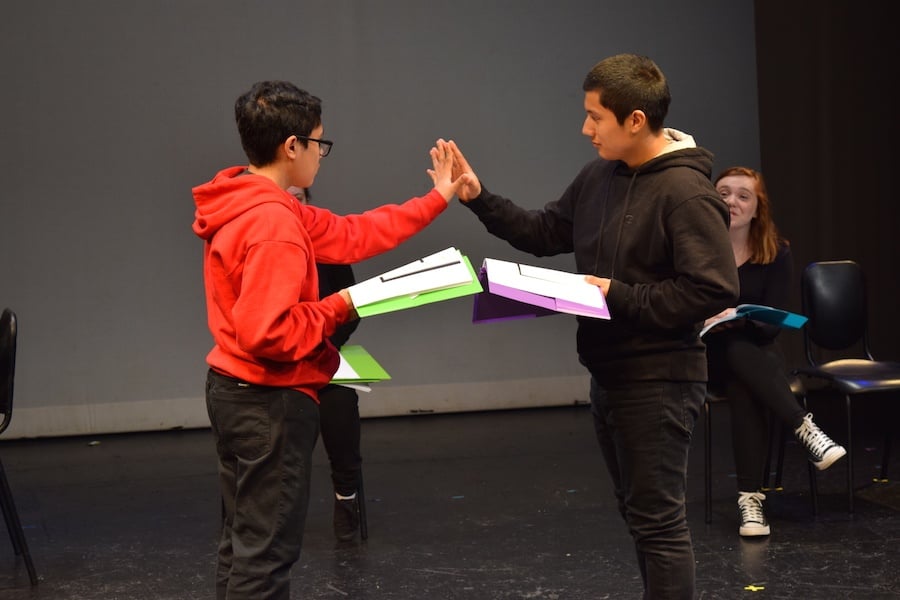 The festival was born earlier this year, as Co-Op Arts Director Timothy Jones met with directors and drama teachers Charley McAfee and Christi Sargent to talk about a new idea that had been bouncing around his head. While Co-Op typically produces fall plays—last fall saw performances of Steel Magnolias and Heathers—Jones found himself thinking about a new format, in which social justice and still-young work took center stage.

“We’re giving kids access to things they wouldn’t otherwise have access to,” he said Monday afternoon, before the first performance of The Curious Incident. “We thought the festival would be a great, great way for students to dibble … it’s really about the narrative and the truth of these stories.”

“The Co-Op play festival is not just about familiar boundaries but in fact the possibilities to have meaningful sf courageous conversations around social justice,” he added in the festival’s program notes. “This fall we celebrate the intersection of trauma, sexual identity, mental health, and the rigid costs of sustaining a community.” 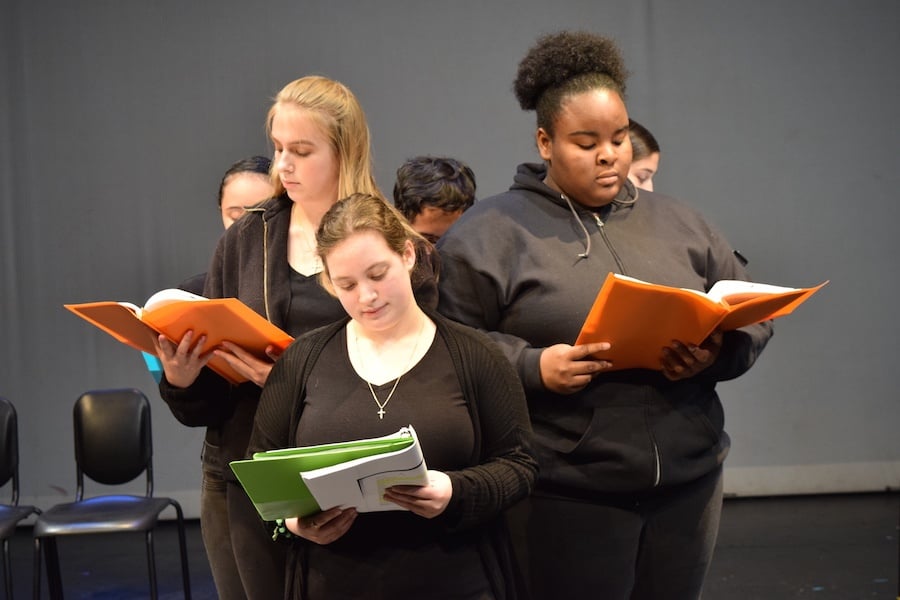 In choosing the plays, Sargent mentioned that she had always wanted to produce The Curious Incident—but couldn’t afford to, because the play has huge production needs. But she realized that the script also seemed perfect for a staged reading because so much of the show relies on lengthy, detail-packed stage directions.

Based on the 2003 novel by Mark Haddon, The Curious Incident of the Dog In The Night-Time follows 15-year-old Christopher Boone as he navigates school and a complicated home life against the backdrop of intense physical and social anxiety. While his diagnosis is never mentioned by name, it seems to fall on the autism spectrum (Haddon has since said that Boone has Aspergers).

When we meet him, he is standing fretfully over Wellington, a friendly neighborhood dog who has been struck dead with a gardening fork. The dog’s owner Mrs. Shears (Stevie Lester) is incensed: she assumes that it’s the socially weird kid who killed her dog, and calls the cops on him before he can completely grasp what’s happening. It opens a sort of investigation that tears his world in two, then turns it straight on its head.

Boone’s world is in Swindon, England, but it could just as easily be New Haven. At home, his relationship with his father (Kevin Padilla) is strained, the weight of which we can see as the two connect in tentative, ginger touches, their fingers extended like starfish from their palms. His mother is ostensibly dead, a partial truth of his father’s that will come to haunt the two of them. At school, his teacher Siobhan just wants to be helpful, but may be in a little over her head. 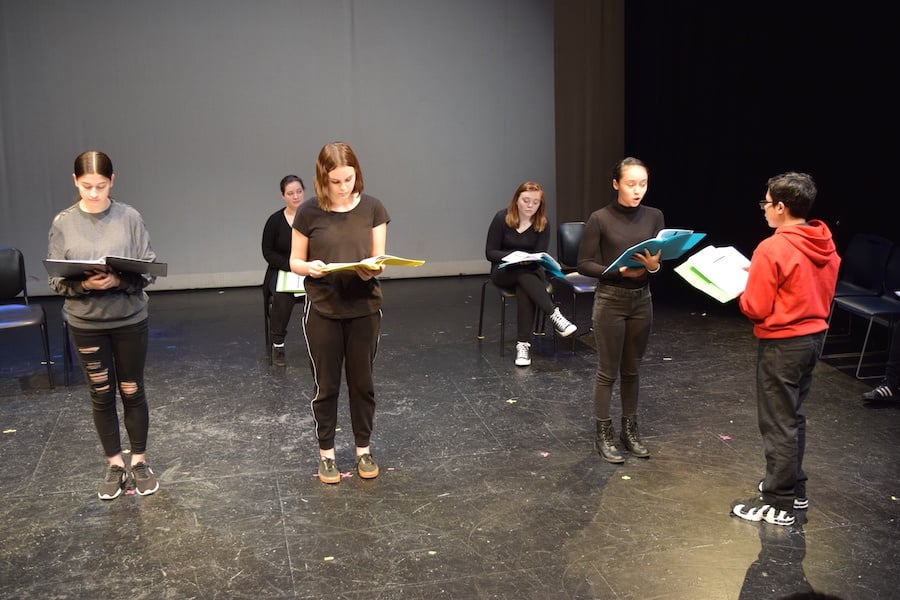 With a handful of chairs and black-on-black outfits in Co-Op’s small blackbox theater, nine students have brought the work to life, their performances big and earnest enough to make up for the lack of set, lighting, costumes. Reading the stage directions, an even-keeled, patient Lauren Wiedenmann has turned the script into something of its own character, splendid and economical at the same time.

As Boone’s teacher Siobhan, senior Gabriela Esposito gives a performance that is well beyond her years, finding the right balance between mutual respect and a propulsive drive to assist a young man who does not see the world in the same way. As Boone describes his day-to-day in near-Knausgaardian detail, she is our sort of interpreter, straddling his fiery world and our quieted one.

So too Boone’s mother Judy (Tamia Lopez), whose short fuses and click buttons are easy to vilify, until we recognize them within all of ourselves. And his father Ed whose wrongs are so understandable that they hurt our hearts, because we’ve committed a few of them too.

The play works as a staged reading—it doesn’t need fancy production because the script’s language is unbelievably crisp. From the moment stage directions begin in Wiedemann’s even voice—“a dead dog lies on the bottom of the stage”—The Curious Incident is written to let us see the world through the eyes of its main character. It’s a dazzling ride, not without humor, if we go along for it.

With the addition of minimal choreography, the cast adds to a script that is already packed with detail and direction. Cazarin jumps, rocks and makes himself small with immense care and fervor. Cast members reach for invisible bars and poles to let us know they are getting on and off of public transit. There are whole yards formed on squares of black floor. And as we are urged to see Boone's version of the world—truly seeing things, instead of just glancing at them—the play becomes an experiment in how far radical kindness and bravery can go.

In a talkback Monday with Co-Op After School Director Paul Bryant Hudson, cast members said they had taken time with the script to think about the perceived outsiders, social anxieties, and mental health challenges in their own lives.

“I would think about the things that Christopher would do after rehearsal,” said Cazarin. “It’s like I got attached to Christopher.”

Of Boone’s diagnosis, he added that “It doesn’t change anything. They can still succeed if they want.”

Lopez, who pays Boone’s mom Judy, said that she has spent more time thinking about how to increase awareness of not just things like autism spectrum disorder, but also depression and struggles with mental health that she sees closer to home.

“I make people as aware of it as possible by speaking a lot to my peers, to different generations, even to my grandma” she said. “It’s like a domino effect that can spread to everything else.”

She recalled watching a film last year in which documentarians brought together members of the radical left and alt right, and had them sit in a room and talk to each other. She said that sometimes, talking about difference felt like a Rorschach test, where one participant may see an old lady, and the other sees a young woman.

“It’s conversation,” she said. “It’s being not so hard-headed, not closed off. We have ears, let’s use them.”

“We have to praise people who are different,” senior Stevie Lester chimed in.

In some ways, cast members said, young artists are the Christopher Boones of the high school landscape—they are often cast out and ostracized because they don’t fit in. But they also often look within themselves, and realize that they can do anything.

Chuckling, Cazarin recalled that when he announced he was going to Co-Op last year, his peers thought that “it would be like High School Musical.” Several cast members said that they’d experienced something similar.

For Gabrielle Doctor, it was the moment peers asked why she was going to school with all the gay kids, and she realized that they assumed you couldn’t be straight and make art. Ashiana Reyes, a junior who played Ed and ensemble characters, said she’d come to Co-Op from a cookie cutter school, where everyone wore a uniform and it wasn’t okay to be different.

“It was very, very, very difficult to just go on with life there,” she said. “It was very stereotypical—you just didn’t see different personas. You didn’t see that. I’m still processing the play, but it doesn’t matter if he has Aspergers. He’s still a human being. We’’re all human beings. We all have blood in us.”

Cooperative High School In The Arts & Humanities continues its play festival with Ike Holder’s Exit Strategy Tuesday Nov. 20 and Wednesday Nov. 21, and Richard Greenberg’s Take Me Out Nov. 30. To find out more, call Co-Op at 475.220.2400