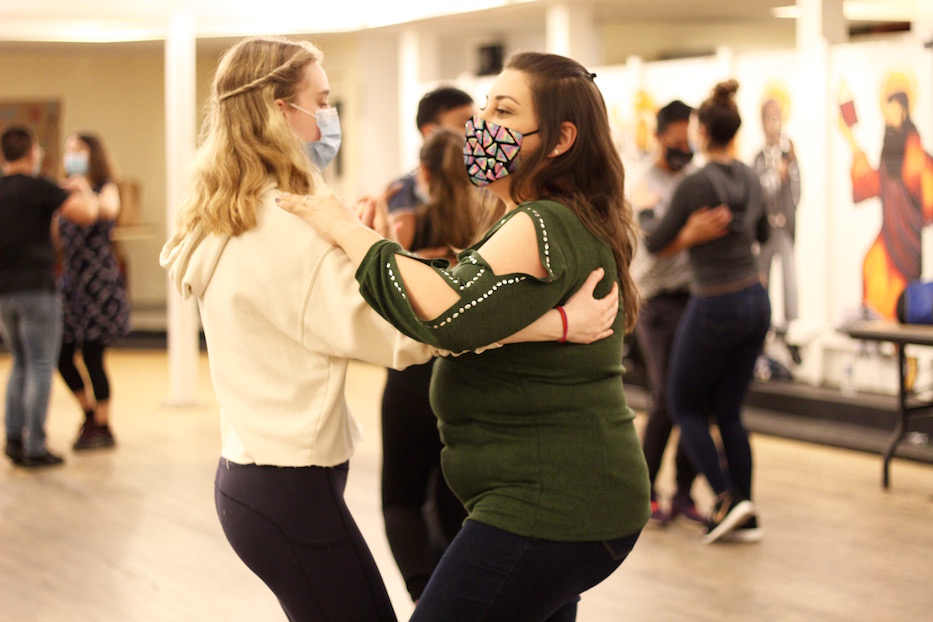 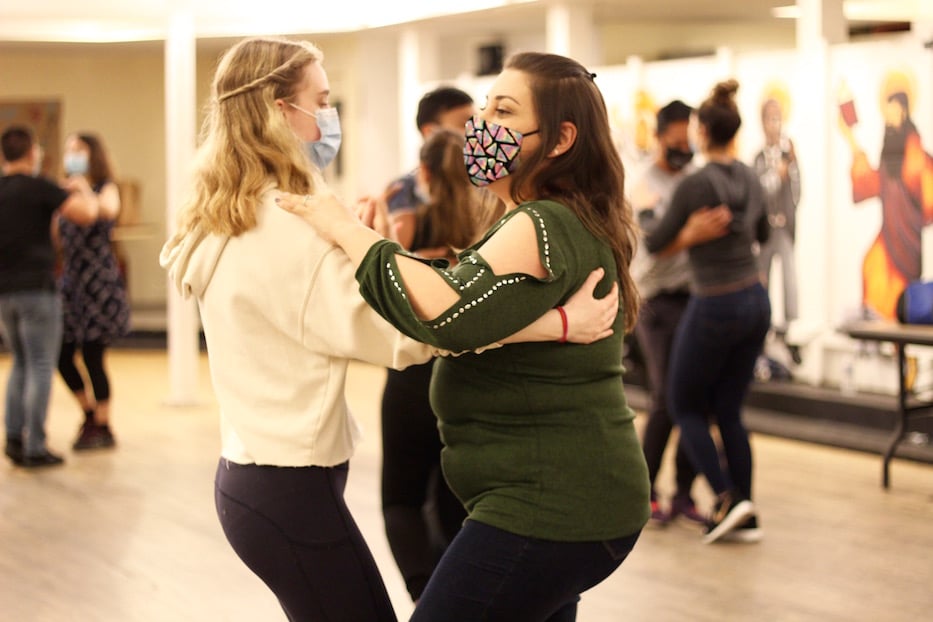 Sixteen bodies moved in unison as bachata crackled from a speaker. Hips unlocked and swayed from side to side. Knees bent in time with the music. Feet flexed and slid across the floor. In a long mirror, Baila Con Gusto CT instructors Jason Ramos and Amanda Duvall counted off in beats of four. Sixteen masked faces looked back.

“That was really good guys!” clapped Duvall at the end of a song. She offered nickel-sized squirts hand sanitizer to students before they moved into partner work.

After a year online, Baila Con Gusto has returned to in-person classes at the Church of Saint Paul and Saint James in Wooster Square. Each Thursday, the group offers bachata, salsa, and unstructured dancing for four hours in the church’s brightly lit basement. Since starting at the beginning of April, classes have grown from just three people to almost 20. The group’s mission is access: Ramos believes that everyone can and should be able to dance. In addition to requiring masks, he recommends that students get vaccinated.

“The past year has been one of resilience, practice, creativity, and frustration for sure,” he said before sliding into a 7 p.m. bachata class Thursday. “I’ve had to reflect on what it means to be a student and a teacher, what the music gets from me and what I get from it.” 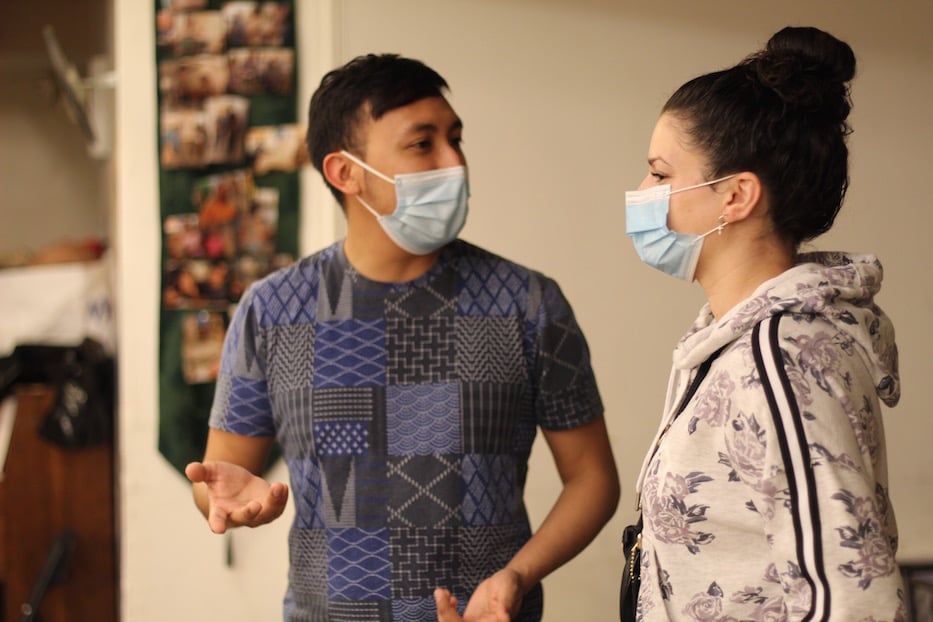 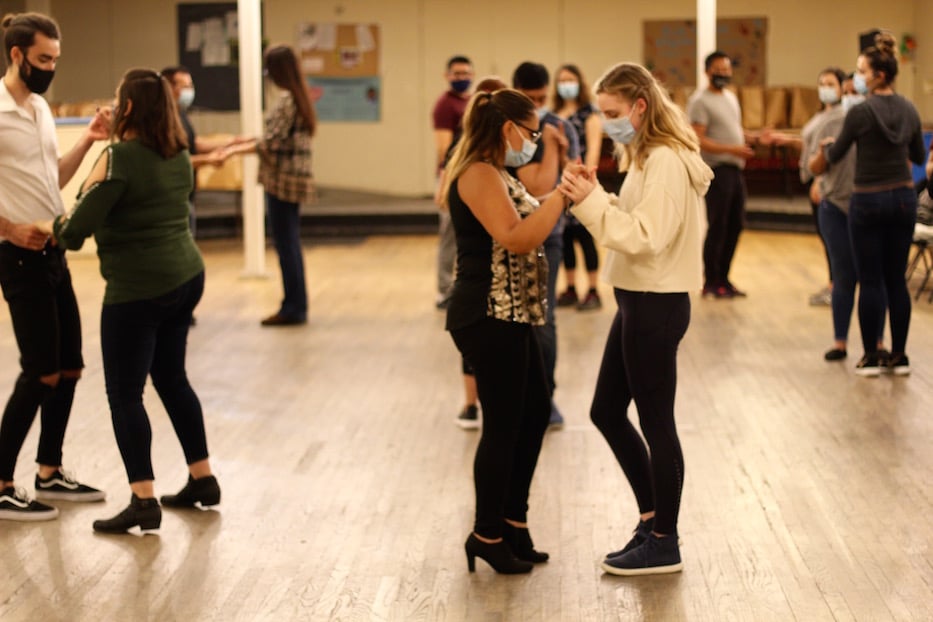 For him, the classes are a way to share Latin American culture with students from all backgrounds. Born to Ecuadorian immigrants in Brooklyn and raised in Meriden, 27-year-old Ramos grew up in a home where he loved to move, but was never formally trained in dance. He started taking salsa seriously as a member of C.O.L.A.D.A., the student organization for Latin American dance at Central Connecticut State University (CCSU). After college, he stopped for a few years until a cousin’s wedding pushed him back onto the dance floor.

He’s been moving ever since, and teaching for the past seven years. Prior to Covid-19, he and Duvall gave salsa and bachata lessons across the state, including weekly lessons at Gryphon's Pub at Yale. The two, who are partners in both dance and life, met four years ago when she was his student. As the founder of Duvall Dance & Adventures, she became his “helping hand”—and foot—when he founded Baila Con Gusto in 2017.

When the pandemic hit last year, Ramos moved classes online and made them completely free. While he missed teaching in person, he also found that it was “a great excuse to experiment” with styles and teaching formats. When the world started to reopen bit by bit, he discovered that he had a network of support that he had built online. He called on those connections to get the word out about classes.

Thursday, lights flickered on as if the room had been waiting for him. The undercroft is an unexpected sanctuary turned dance studio, accessible by a set of rickety stairs on one side of the church and through the back parking lot and industrial kitchen on the other. A long mirror stretches across one wall, so dancers can check their steps. On a mural that wraps around the room, artists and saints dance, compose, and sing from beyond the veil, each rendered with a flame-colored halo. 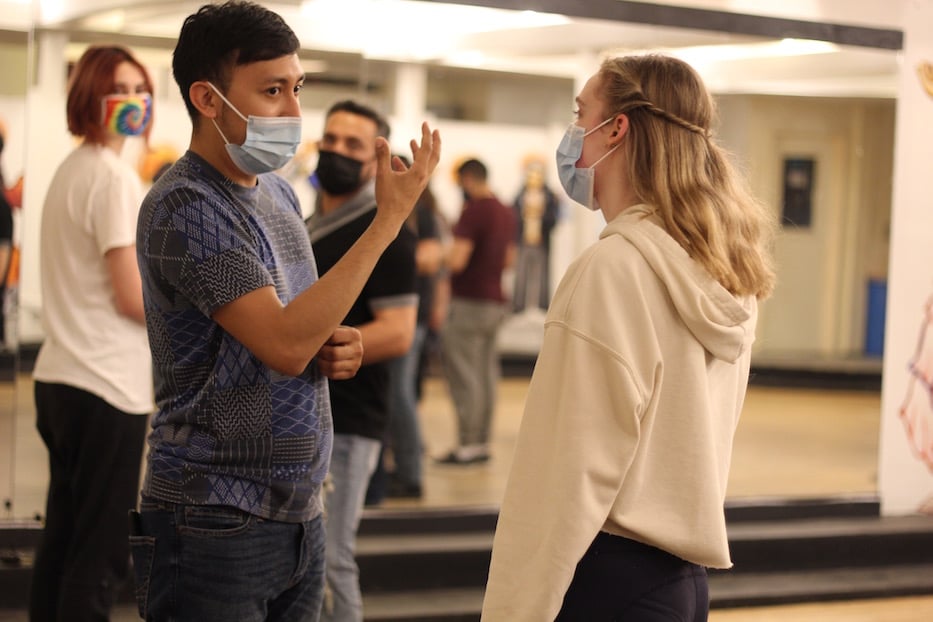 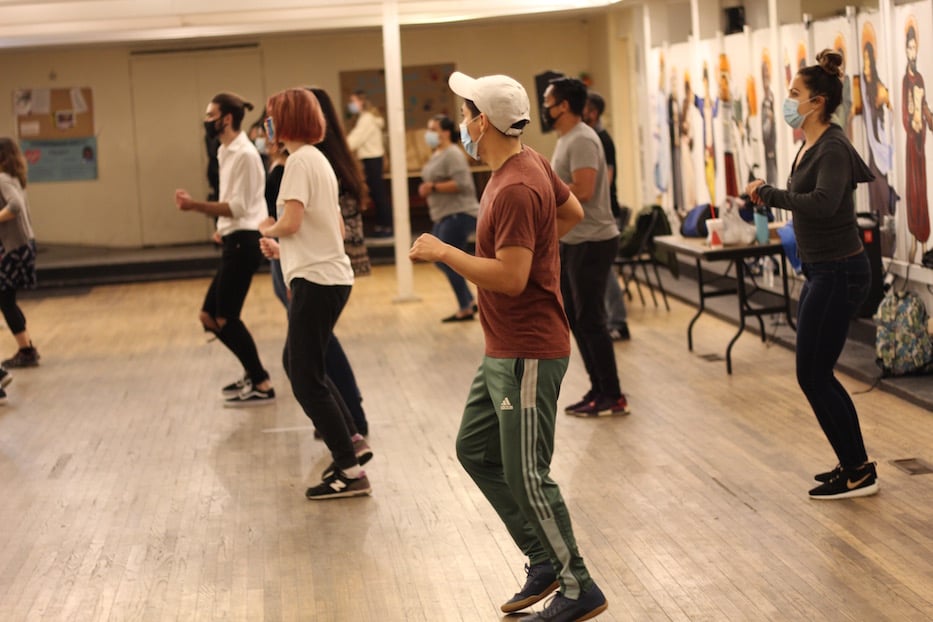 The mural, which Princeton grad Julie Dickerson painted in 2010, invites movement. In one tableau, a ballerina balances on pointe as her partner reaches out to take her hand. In another, the composer Joseph Bologne, Chevalier de Saint-Georges, lifts his arms and legs jubilantly as sheet music flies from his fingers. Martin Luther King, Jr., looks across the room and ruminates on his next speech. Brightly robed saints stand between them, all on the edge of motion.

Thursday, attendees filed in from the back door, peeling off sweatshirts and raincoats as they prepared to dance. Across the floor, sneakers and ballet flats sidled up to sleek leather boots. Returning students pandemic-smiled at each other, their eyes crinkling above tightly fitted masks. At the front of the room, Duvall walked dancers through solo practice work, counting off the beats before she added music. As her hands flew out to her sides, she moved to a steady “one … two … three … four.”

Classes, which started in early April, bring in attendees from around the state. Thursday’s class included college professors and students, homeschooled teenagers, construction and factory workers, and research scientists. Early in the evening, Shelton resident Dawn Prancuk arrived with her two teenage children, Maya and Noah, in tow. A few minutes later, sisters Priscila and Jessica Cabrera hustled to find a place on the floor. Others arrived alone, slipping back into the steps as though they were long-lost friends.

In addition to English, soft strains of Spanish rose up from the group. Ramos paused to translate as he gave directions. The dominant language, however, was dance.

After warming up the class, Duvall and Ramos pointed to two sides of the room. One side, they explained, was for leaders. The other was for followers. A few leaders became followers after they realized that there was an imbalance. Duvall half-jogged from one line to the other, distributing more pumps of hand sanitizer. Students greeted each other with friendly nods before starting partner work. 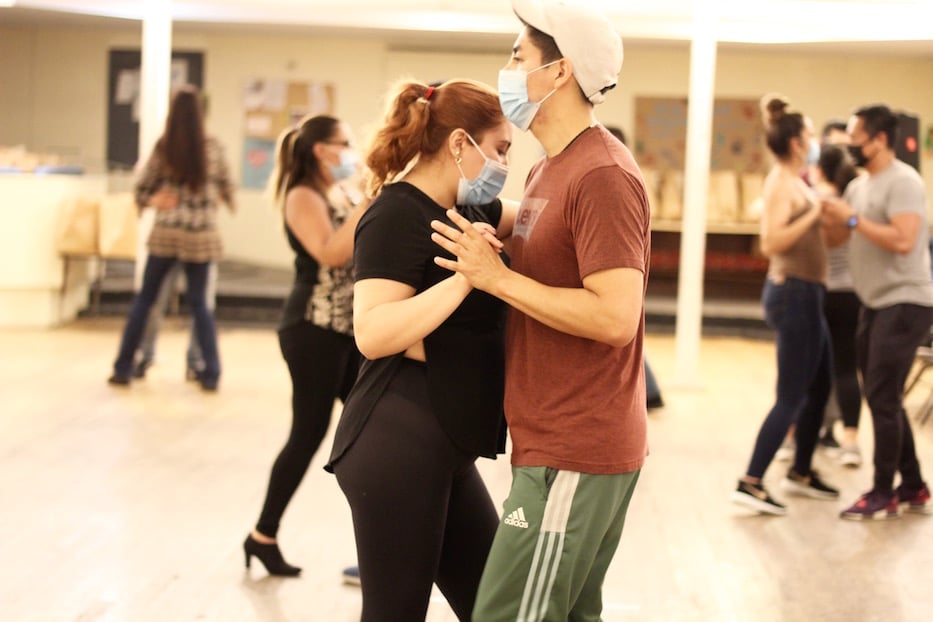 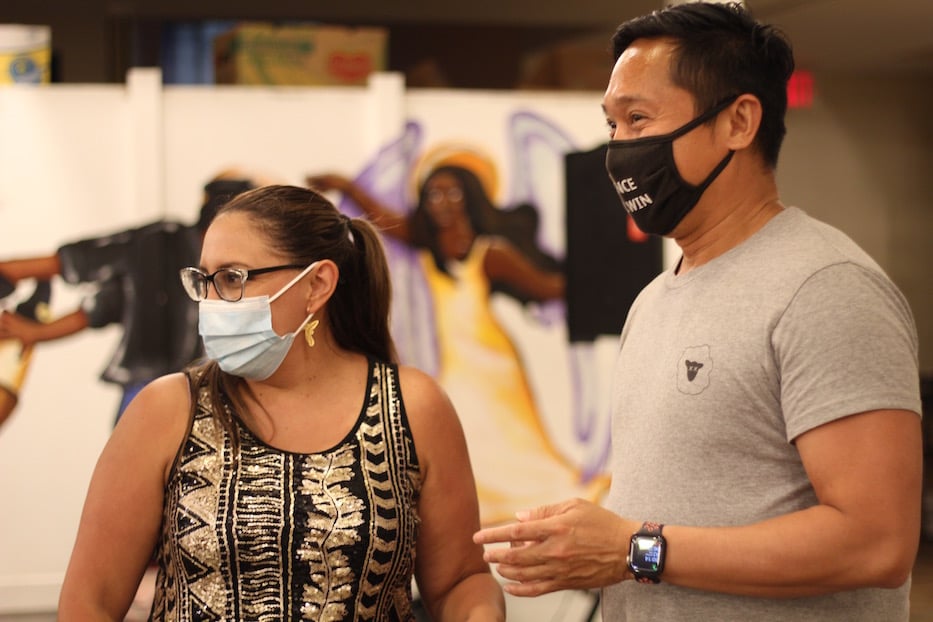 Tentative laughter rippled across the room. Students, now paired, watched as the two began to glide, Duvall’s hands curling around Ramos’ back and then pulling away right on time. The two did a catch in slow motion, then turned to repeat it one more time. Ramos warned followers not to be passive, but to learn their partners’ rhythms and move with them.

“Followers! It’s very important—don’t let your arm do this,” he said, windmilling his right arm to demonstrate. He gave leaders the same direction. “And don’t be shy!”

A beat sprang from the speaker, languishing for a moment. As it picked up, dancers eased into the music. Rhythm guitar trilled beneath smooth vocals. Percussive güira came in from behind. Toward the back wall, Christian Gonzalez welcomed Paula Unba with open arms. Gonzalez, who works as a simulation specialist at Yale New Haven Hospital, has been dancing salsa and bachata for nine months. Unba came on Thursday for the first time.

As his feet worked from memory—back, forward, and back, sometimes working all the way onto the toes—she followed. A few others lost the footwork and shrugged it off, laughing. At the right hand side of the room, dancers Chris Ty and Priscila Cabrera dissolved into laughter after missing a step. They composed themselves, stood straight-backed, and started again. 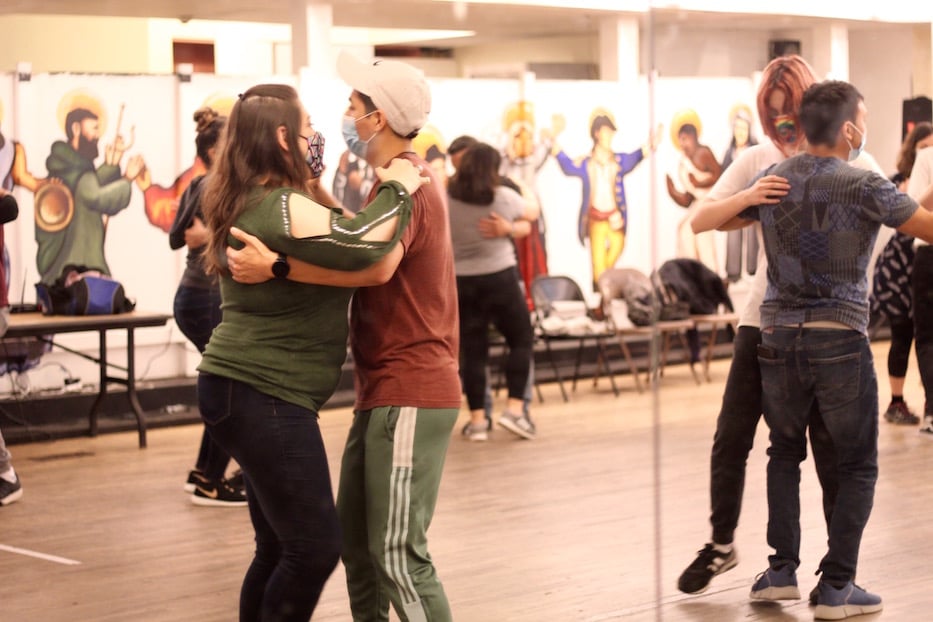 Ramos said that part of his goal is bridging community through dance. While he does it with humor—“please, please try your best not to manhandle your partner,” he said at one point on Thursday to giggles—he also does it with heart. Before the pandemic, Yale graduate student Kevin Jiang was one of Baila Con Gusto’s frequent students. When he was killed earlier this year, Ramos helped spread the word about a funeral fund for his family and young fiancée. Thursday, he welcomed new students as they filtered in, undeterred by the threat of rain.

He praised both the church and the Whitneyville Cultural Commons, through whom Baila Con Gusto rents the space. Both organizations care for the undercroft and provide sanitizing supplies, meaning that all he needs to do is flip the light on and make sure students are following Covid-19 protocols. On Thursday, no one had trouble keeping a mask—and sometimes two—tightly over their nose and mouth. Ramos said that classes have been popular: a Covid-cautious “Salsa Social” last Saturday went through midnight.

By the end of the class, several of the students were salsa and bachata converts. The Cabrera sisters, who moved to Connecticut from Ecuador 14 years ago, said they tried the class after a tip from their sister in law. Growing up, the two used to choreograph dances together for their parents, but never took lessons. Thursday, they came to spend time with each other.

While they live just one town away from each other—Priscila is in Hamden and Jessica is in New Haven—they have seen less of each other following Priscila’s marriage. They said the class was also a kind of release after a long day: Priscila works in a shipping factory and her sister is in construction.

16-year-old Maya Prancuk has been coming for three weeks with her mom Dawn. Thursday, she beamed after an hour of bachata, eyes wide and bright.

“It’s so much fun,” she said. “You get to meet so many people along the way. And you learn something new from each person each week.”

As the weather warms up, Ramos is also returning to teaching outdoors. On May 5, he plans to lead free lessons with “Salsa On The Promenade” on New Haven’s closed section of Orange Street. DJ Christie, who will be doing music at the event, said she is excited to see salsa and bachata pop up in the city once again after so much time online.

Before the pandemic, she deejayed a weekly salsa session downtown. For the past year, she’s waited for work to reappear after her gigs dried up overnight. Thursday, she stayed for a few minutes to dance before heading out.

“The reason I do what I do is to give back to the community,” she said.

Baila Con Gusto CT is on Facebook and Instagram. To find out more about upcoming events, including Thursday classes in Wooster Square and Salsa on the Promenade May 5, visit them there or at their website.