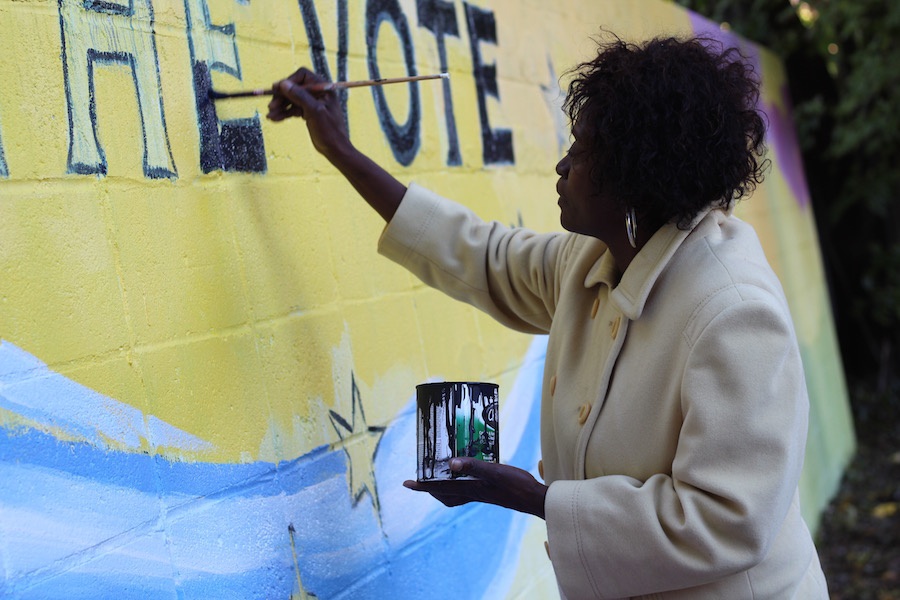 Alice Woodson has never missed an election. She always knows where she’s registered, spends the summer and early fall stuffing envelopes for campaigns, and getting caught up on candidates. For years, she’s kept the news on in her house, the constant chatter of MSNBC never out of earshot. So when she saw a half-painted mural that read “Bike The Vote” on her daily walk through Newhallville, she picked up a brush and open can of black paint, and got to work on filling in the letter “E.”

Woodson is one of several New Haveners who have stumbled on “Bike The Vote,” a mural and voter eduction initiative next to 16 Gem St., on the backside of a building the looks out at 747 Dixwell Ave. The project is funded by the New Haven Votes Coalition, with additional support from the League of Women Voters and Farmington Canal to Rail Association.

Painting for the mural, which began on Oct. 28, is led by "social impact artist" and Art 25 co-founder JoAnn Moran. 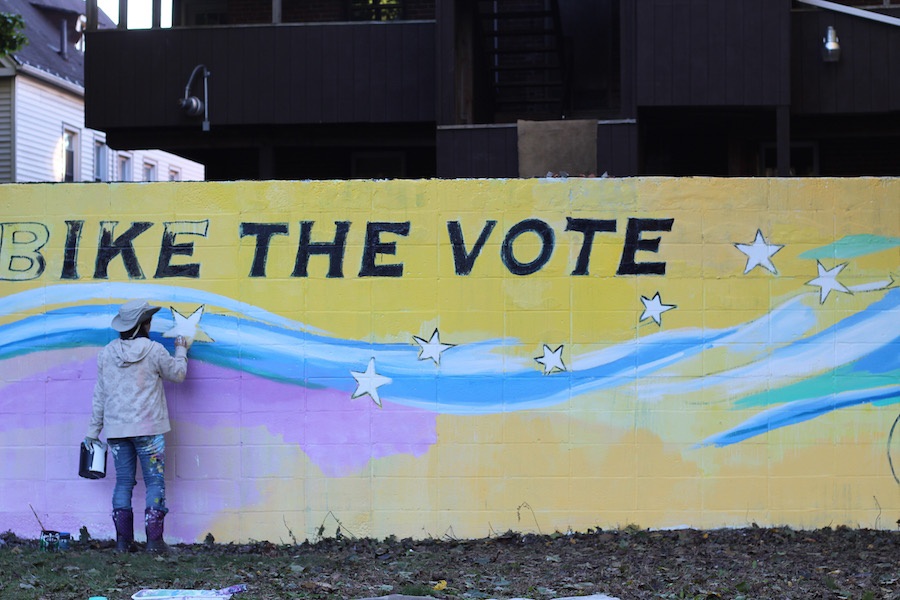 After a quiet start on Sunday and Tuesday, Moran has invited New Haveners to come out and paint with her through Sunday Nov. 4, on which there will be a final community painting day. In order to finish in time, she has been at the site each day from 11 a.m. until dusk, working on the mural with anyone willing to stop on the trail, chat about voting, and paint for a little while.

Planning for the mural began in late August, when New Haven Votes founder Aaron Goode walked into a League of Women Voters meeting that Moran was also attending, and asked if anyone was interested in helping with a mural on the trail. Two years ago, he explained, he’d stenciled the words "Vote" and then “Bike The Vote” on the backside of 747 Dixwell “on a whim,” in hopes of growing voter turnout in the 2016 election. He hadn't done anything with it since, he told Moran—but he would like to.

More recently, the Farmington Canal to Rail Association (of which Goode is also a member) announced an interest in putting more public art on the trail, a process that started with Kwadwo Adae’s Elm City Footraces and Women’s Empowerment mural projects in 2016 and again this year. With the election approaching, Goode said he and Moran decided to go for it. New Haven Votes Coalition provided $500 for the project, which was enough o bring it to fruition. 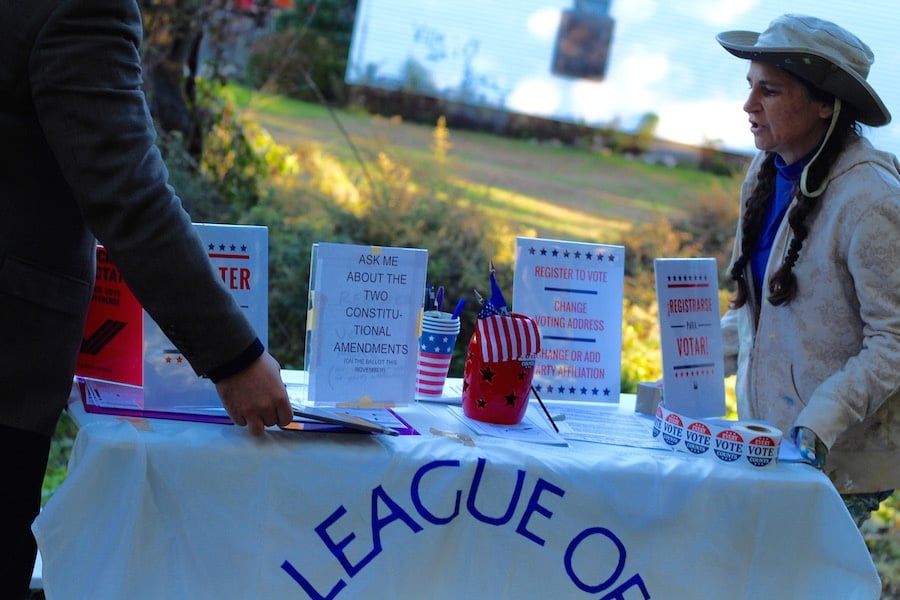 After hearing Goode speak about the project, Moran said it was an easy sell. For years, the artist worked on a series of public lamppost banners and a “We The People” banner project in New Haven, collaborating with New Haven students on the theme of “America The Beautiful.” As she began to think about “Bike The Vote,” she saw a logical tie-in with the image of a bike whizzing past, channeling an innovation that played a vital role in women’s suffrage. It was, she noted, that “mechanical beast” that revolutionized how mobile and independent women were allowed to be before that 1919 vote.

But it’s also personal. Moran, whose daughter is the New Haven artist Jules Larson, lived on a sailboat for several years, during which she struggled to register a proper voting address. She said that experience—she is now registered in Fair Haven, where she is living for the moment—has given her just a small idea the loops through which people must jump when their lifestyles are more transient, either by circumstance or by choice.

“I participate,” she said. “I think that everyone just needs to find their passion … whatever issue that is.”

Just a few feet away, Goode worked on painting a banner urging voters in both Spanish and English to vote on Nov. 6. He said he's excited to see the project go up in a matter of days, after watching Adae race to finish after two years of planning, and at least three months of painting. 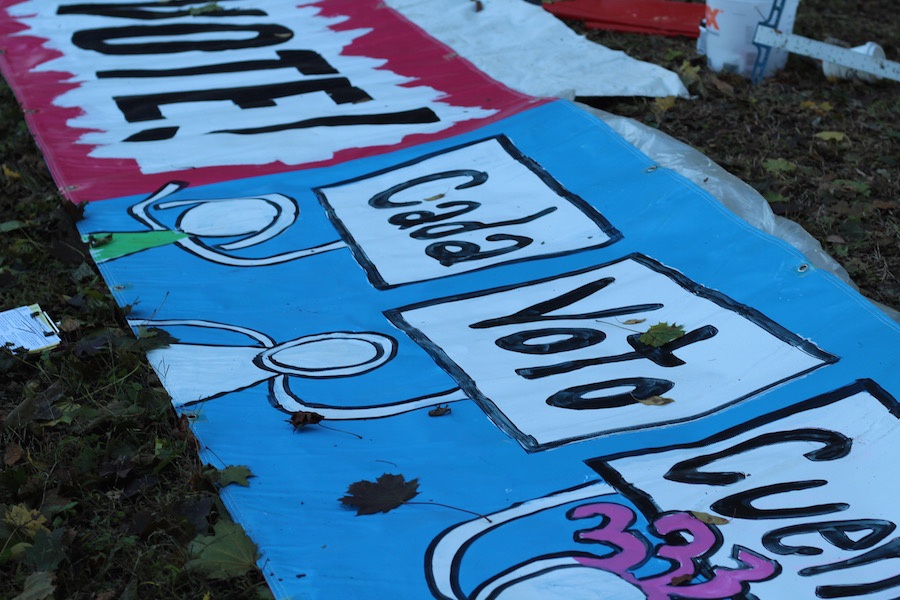 While “Bike The Vote” was initially focused on h voter registration, the project shifted gears after starting so close to Connecticut’s Oct. 30 registration deadline. Goode said that he and Moran have taken the opportunity to walk potential voters through mock ballots, remind them to fill out both sides, and given out information on two proposed constitutional amendments.

For the hours that one or both of them is out there each day, there’s a table festooned with League Of Women Voters’ swag, where people can stop and take information, talk to either of them, or sign up to get more involved.

As she outlined a yellow-and-black “E” back at the wall, Woodson praised the initiative, joking that it gave her a chance to get back to painterly roots for the first time since her high school days at James Hillhouse. Born and raised near the mural site on Newhallville’s Thompson Street, Woodson has spent her life in New Haven, working in the financial sector until she retired several years ago. She said she’s never—“never”—missed an election, because “every vote counts.” 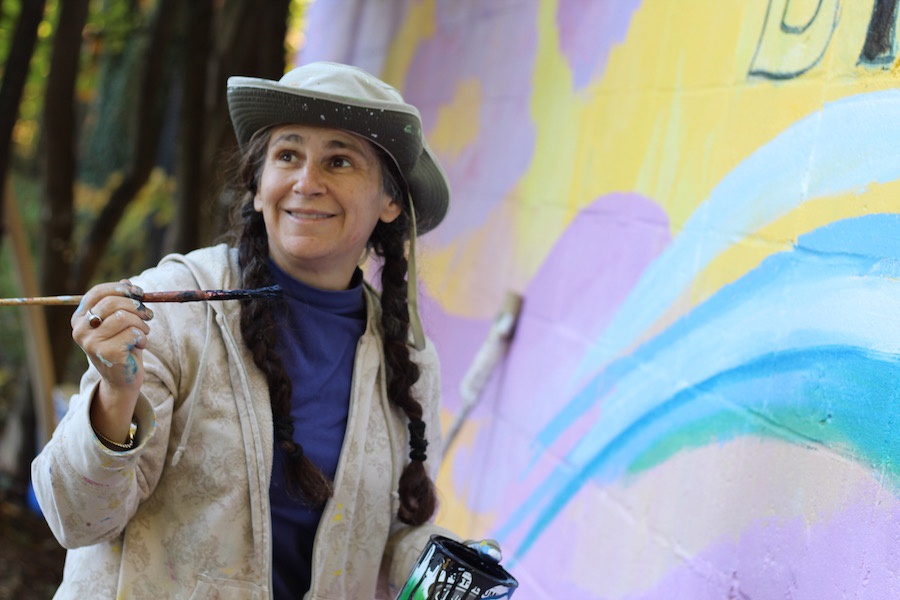 “It’s pitiful what’s going on,” she said. “It’s life or death. We don’t have the representation that we need. Trump is out of order. The way that I see things going, it’s tribalism. This country is divided, people’s rights are being taken away. It’s totally out of order.”

Nearby, Ben Silverman wasn’t swayed. After spending two years in Norway, Silverman returned to the U.S. earlier this year, staying with his parents in New Haven as he tries to find work teaching mindfulness. Tuesday afternoon, he was headed to Boston, and grabbled a paintbrush for a few minutes of painting before his train.

As he worked on the word "vote," he told Moran he'd skipped the voter registration deadline, because he can't get excited about the election. She pushed back: he still had time to register—40 minutes and shrinking—if he wanted to. Silverman politely declined.