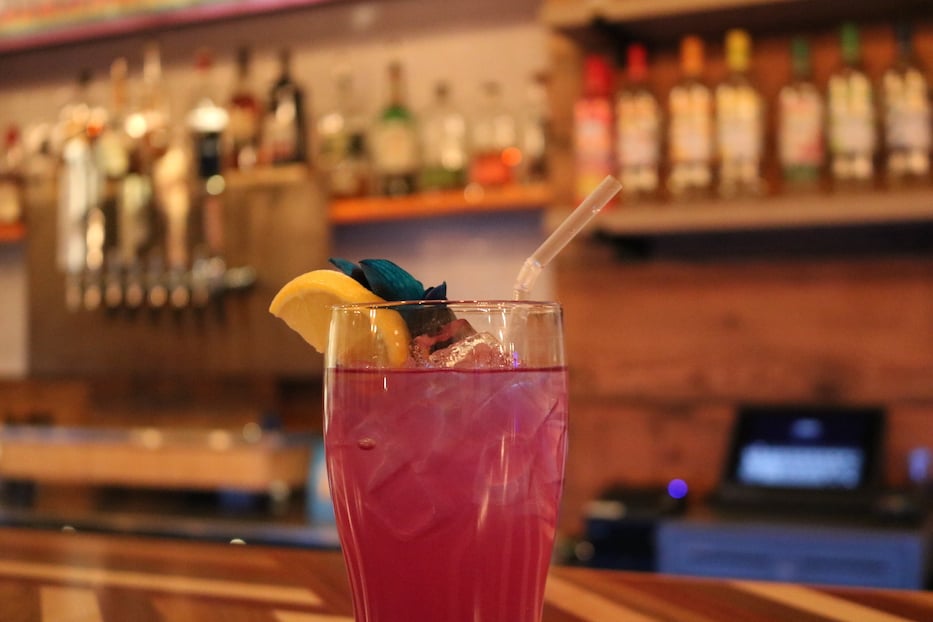 In the golden warmth of Blue Orchid's soft lighting, the Violet Lemonade radiates a deep purple. Fresh lemon and a soft blue flower provide a garnish for this non-alcoholic version of the restaurant’s signature drink: the Spiky Blue. The lemonade combines a pure, natural sweetness with a refreshing citrus taste.

The color comes from all-natural butterfly pea syrup, just one of the unique ingredients at the Court Street pan-Asian brainchild of Natthawut Tipjak (fondly referred to as Kyu) and his husband, Michael Flora. Opened in the midst of the pandemic, the restaurant is a well-mixed cocktail of business acumen, customer feedback, and constant experimentation.

The restaurant sits at 130 Court St., in the former home of The Beer Collective. After that restaurant and bar became a casualty of Covid-19, the two signed a lease for the space in October 2020.

Both Flora and Tipjak said that customers often tell them that it’s a special space, particularly for members of the the LGBTQ+ community, to feel welcomed without a bar or club atmosphere.

“We didn’t set out to do that, but people recognize it,” Tipjak said.

From its warm lighting to wooden interiors, Blue Orchid exudes a friendly coziness. Clusters of tables for four line the walls of the restaurant and besides a white lattice divider. Orchid flowers bloom in the windows to an outdoor patio. On a recent Tuesday, Beyoncé’s “If I Were a Boy” played on the screen behind the bar, where the bottles on one shelf are arranged by the colors of the rainbow. 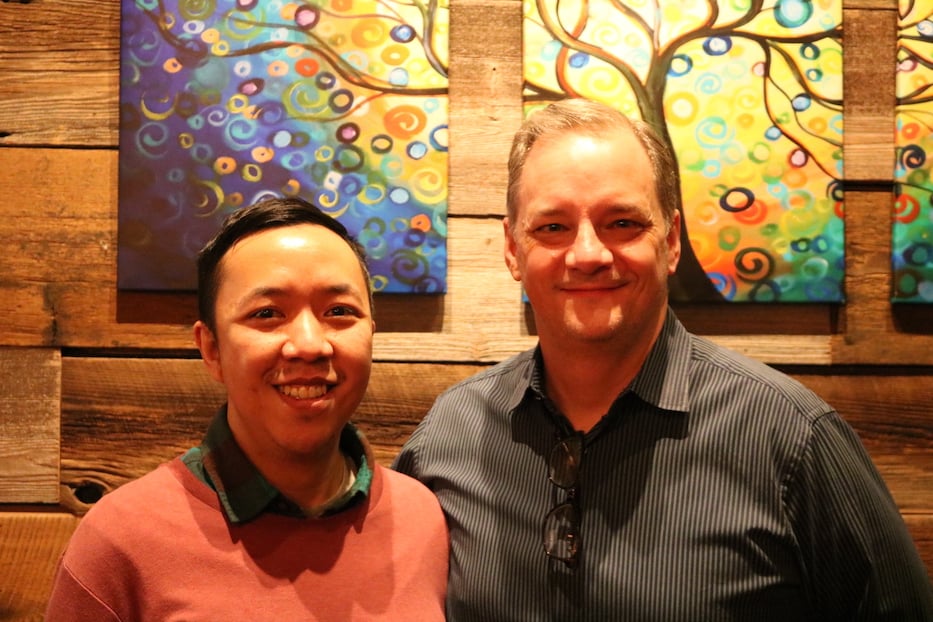 Natthawut Tipjak (fondly referred to as Kyu) and his husband, Michael Flora in the space. Amelia Dilworth Photos.

Blue Orchid opened in October 2020, as a dream that finally came to fruition during the pandemic. Tipjak received his Bachelors in food science and technology from Chiang Mai university in Thailand, and came to the United States a year after graduating. He worked as a food scientist in Hamden before moving to New York, and eventually returning to Connecticut.

“I know what I like about food,” Tipjak said. Given his history in the food industry, he said that owning a restaurant had always “been in the back of my head.” At Blue Orchid, he cooks all the food and develops the menu. He also does the graphic design for the restaurant’s bold, eye-catching menu but is quick to assert that the restaurant is a joint effort.

Flora takes care of the business side of the restaurant. During the day works as the Chief Financial Officer (CFO) for Marrakech, Inc., and mixes drinks at nights and on the weekends. “I always wanted a bar, he always wanted a restaurant, now we have both,” he said.

Blue Orchid is “definitely” a family business, Tipjak added. Flora’s son Kevin, a senior at Amity High School, helps out after school and on the weekends. Due to the staff shortage in the hospitality industry, the restaurant only has one full-time waitress, Fom. She said that Tipjak is “like a brother” to her.

“We knew [opening a restaurant during the pandemic] was going to be hard,” Flora said—but the pandemic was also essential to the Blue Orchid’s success. It was the pandemic that forced Tipjak, a veteran of the food service industry, out of work. It gave him the time to develop a menu and start a restaurant.

When The Beer Collective officially closed in July 2020, it left behind the infrastructure they needed to start a restaurant. “I loved the Beer Collective,” Flora said. He was familiar with the site, and recognized the opportunity to rent an affordable space in New Haven: a city where a restaurant could thrive. Tipjak and Flora thought about purchasing the space over the summer, and ultimately signed the lease on Blue Orchid in October. 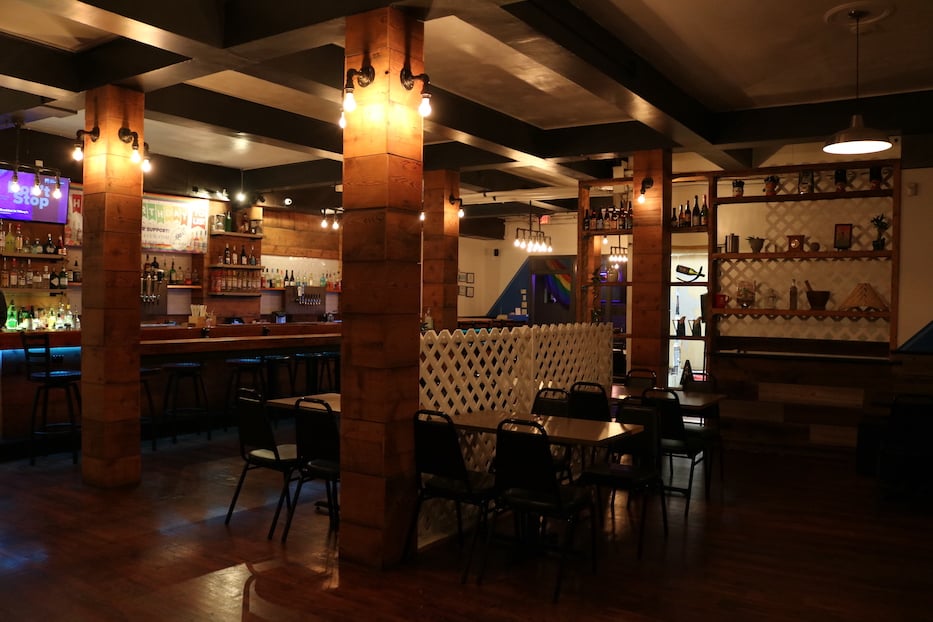 The interior, which uses existing infrastructure that The Beer Collective left behind. Amelia Dilworth Photos.

They began operations in December of 2020. The restaurant had what Flora called a “slow start,” serving up carryout orders through GrubHub and UberEats until May, 2021.

“We got a good restaurant location,” Flora said.

“We’re lucky to have this place,” Tipjak agreed.

The restaurant is surrounded by residential spaces, and Flora said that the neighbors often visit. It’s also directly behind New Haven’s City Hall, making it a favorite lunch spot for workers. Its location on Court Street makes it especially accessible for patrons who live downtown, in the Ninth Square, and in Wooster Square.

The menu also plays a special role in attracting customers. Both Flora and Tipjak lit up when this reporter asked about Khao Soi, a yellow curry noodle soup that has become a fixture in New Haven's food scene. When Flora talks to customers who have had Khao Soi in Thailand, they tell him that they seek out Blue Orchid’s dish, and that Tipjak’s recipe is the most authentic dish they can find outside of Thailand.

“I love this dish,” Tipjak said. “My family loved making it for me. When I had to send our menu to the landlord, I said, I’m still thinking about a lot … but I know this for sure.”

The couple emphasized that Blue Orchid is a pan-Asian restaurant, describing the menu as a “Thai take on different dishes.” Tipjak experimented in the beginning, and hopes to add more dishes and develop specials to highlight the food that he’s interested in. He emphasized that the restaurant adapts based on what customers say. For example, Blue Orchid already has a robust selection of vegan dishes, but Tipjak plans to make a separate section for vegan dishes on the print menu.

He and Flora are also working to make it a space for community celebrations. In November of last year, the restaurant welcomed the New Haven Pride Center for its 25th anniversary afterparty, aptly titled “Drag and Drinks.” The restaurant was at full capacity, complete with drag queens. “It was a lot of fun,” Flora said.

“A lot of people didn’t get a chance to try the food,” Tipjak said. So months after the event, “more people came back, and keep coming back.”

Patrick Dunn, executive director of the New Haven Pride Center, stressed the importance of having a new restaurant downtown that is not only LGBTQ+ friendly, but LGBTQ+ owned. Following the center’s afterparty in November and holiday lunch in December, he booked Blue Orchid as one of the restaurants on the Center’s Dorothy Awards tasting menu in March.

The staff at the Center, which is just two blocks away down Orange Street “loves their food,” Dunn said. He also loves that Tipjak is making it downtown as a chef of color.

Dunn said he also feels safe and welcome every time he walks through the door, whether it's as Ms. Kiki Lucia or on a date with his boyfriend, Kyle. When February rolls around, “one of the most stressful things every year is deciding where to go on Valentine’s Day,” he said. This year, he and his boyfriend were the only visibly gay couple in a two-story restaurant. That thought never crosses his mind at Blue Orchid, which joins Te Amo Tequila, Barracuda and Vivaz Cantina as proudly LGBTQ+ owned and operated restaurants downtown.

“I think that even in the very very queer New Haven that we have, having LGBTQ owned restaurant spaces means that I can go on a date and I don't have to think about anything,” he said. “They're a newer business that is in kind of a funky spot, and I want to see them succeed.”