BRAMS Brings The String Orchestra Back To Life 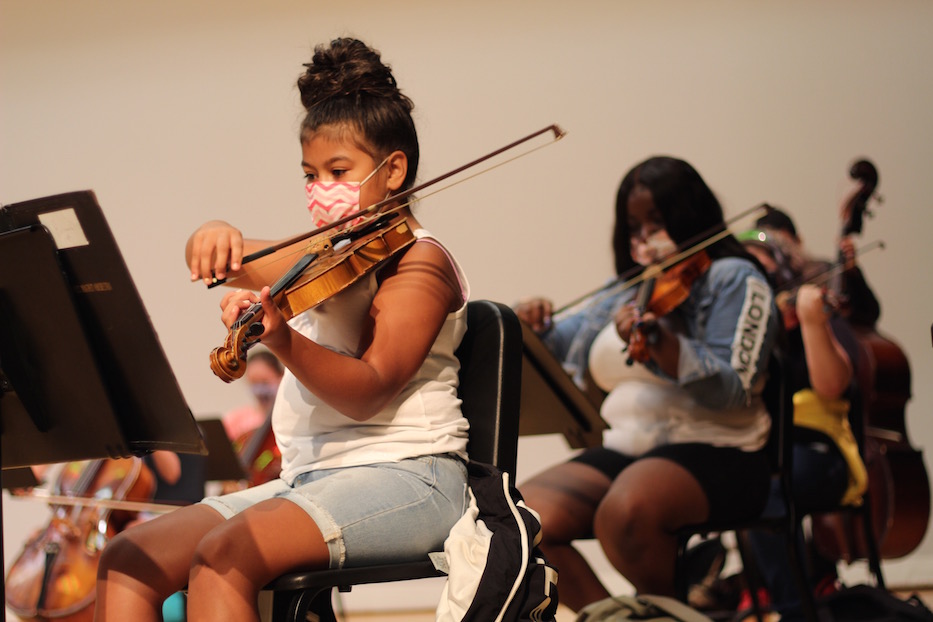 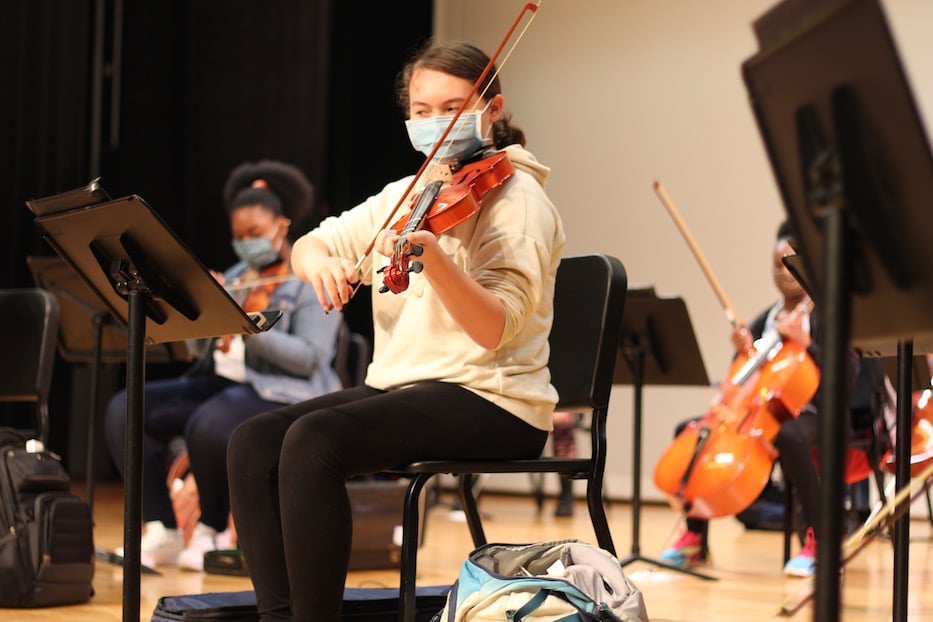 Strings teacher Henry Lugo lifted his hands and looked out at a sea of masked faces. Sixteen pairs of wide, eager eyes stared back. From the front two rows, violins played in the first bar of Paul Lavender’s “Majestic March,” the instruments squealing joyfully as they rose up to meet each other. Cellos hummed in steadily beneath them. A double bass raised its voice at the edge of the stage.

This week, the song propelled students at Betsy Ross Arts Magnet School (BRAMS) into their first in-person string orchestra rehearsal since December 2019. For fifth and sixth graders in the group, it marked their inaugural practice with the ensemble. For eighth grade students, it was a last hurrah before heading to high school. At least one student, fifth grade violinist Jolianys Reyes, logged in remotely.

“We’re all a little exhausted at this point,” said Lugo, a general music and strings teacher at the school. “But the current fifth and sixth graders have never played with the orchestra. I was like, ‘Let’s just pull a bunch of music and play together.’”

As students walked one by one into the humid auditorium, they got a red carpet reception from Lugo and theater teacher Mat Young, who filmed the rehearsal for a spring concert video. Many carried black violin cases, the metal clasps glinting in the light.

On stage, a fleet of small cellos sat at the ready, waiting for bows and hands to grace them. Last weekend, Lugo drove around to students’ houses to pick the instruments up and take them to the school. He said it makes things easier for them: many students are still not used to bringing their instruments on the buses after a year of learning online.

Megan Corcoran, a sixth grader who commutes from Stratford, bounded up to the stage. She said she picked out the cello last year after listening to Yo-Yo Ma and falling in love with the instrument’s round, deep sound. This year, practicing has become an outlet for her to relax when school gets stressful. With many of her classmates, she returned to school in-person earlier this spring, as soon as the New Haven Board of Education made it an option.

“It’s been a little weird, but it was manageable,” she said before slipping into her seat, laying her feet flat on the stage and picking up the instrument like an old friend.

As students assembled onstage, Lugo sifted through physical copies of sheet music, lifting them triumphantly after a year teaching on Google Classroom. His arrangements for Bill Withers’ “Lean On Me” and the spiritual “I Look O'er Yander” peeked out from his hands. A few of the violins warmed up on their own before the group came to attention. A single Chromebook for Reyes still sat at the lip of the stage.

“Three feet guys!” Arts Coordinator Sylvia Petriccione reminded students before taking a seat in the back of the auditorium.

Kiara Testone, a seventh grader who transferred into the school just months before Covid-19, took a seat near the front of the stage and lifted her violin to her chin. She said that playing in-person with members of the orchestra “makes me feel more alive” after more than two semesters online. Even though it takes an hour-long bus ride each way from her home in Seymour, she said she’s much more motivated to play when she’s not alone at home. 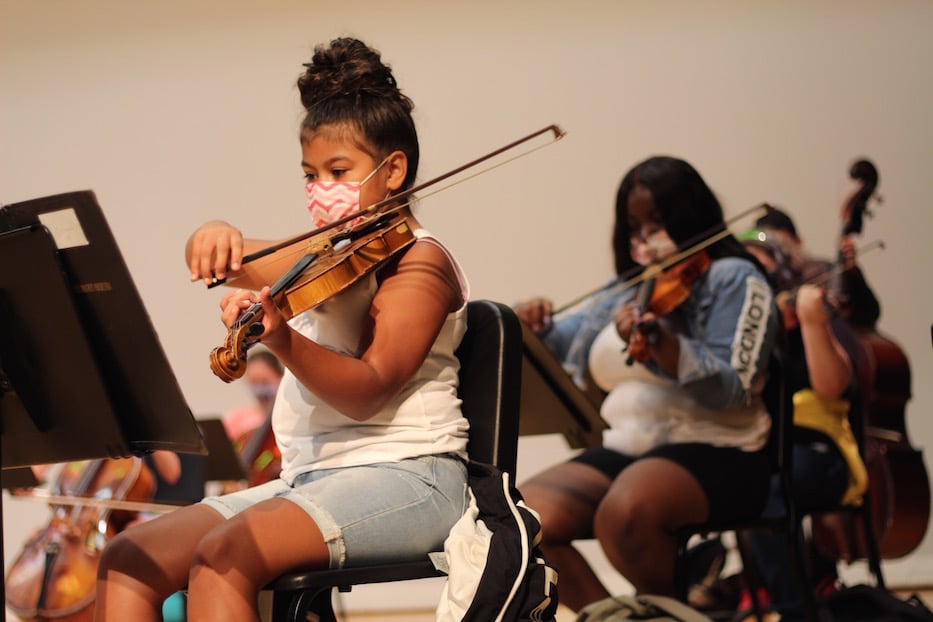 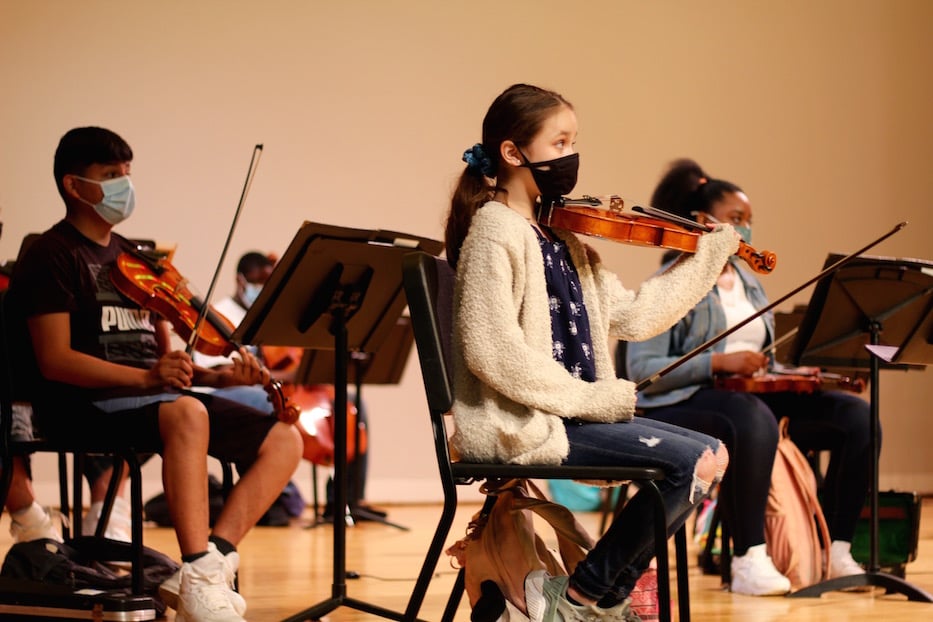 “It’s really different online,” she said. “It sounds more … you can tell that it’s on a computer. It’s glitchy all the time. It was really different—sometimes the notes would sound wrong, or the timing would sound wrong. And like, I’d know I was doing the right timing, but the computer would throw me off. I really like performing, because I like being onstage a lot. I feel more confident with my playing being onstage.”

After starting on “Majestic March,” young musicians looked around, eyes crinkling at the edges as they smiled beneath striped, sequined, and medical-grade masks. Lugo took a beat and turned to “Lean On Me.” He snapped his fingers, lifting his wrists in 4/4 time. The sound echoed through the room. Someone coughed toward the back on the stage. There was a pause, and then he counted students in.

As they played, students made the lyrics their own. Cello swooped in to back the violin, as if the instruments were giving each other that helping hand that Withers alludes to. At the middle of the stage, fifth graders Jayleen Mercado and Erica Washington showed off how much they’ve learned since November of last year. On double bass, seventh grader Joel Diaz held it down.

Diaz, who transferred into the school last fall, has only been playing since October. He said that it’s easier to practice knowing that he’s coming into school and playing with other students. Lugo, who plays double bass professionally, praised him as a natural.

“I thought it [the bass] would suit me,” Diaz said after rehearsal. “It makes me feel good to play with people. Sometimes it makes me a little nervous. I want to get used to it and more chill with it.”

Lugo also saw the rehearsal as a chance to celebrate graduating eighth graders, he said. Students Maylanni Carlson and Mikayla DeLeon, both headed to Cooperative Arts & Humanities High School (Co-Op) to study the violin next year, have been working on Mozart’s “Mirror Duet for Two Violins” on their own for months.

As their classmates took a five-minute break, they recorded the piece. The violins sang and chattered with each other, their voices a synchronized ballet. They dipped and wove upwards, deferential and polite. They became fierce, declarative as they spit out short bursts of sound. The piece bounced and coasted over other students, many sitting still to listen.

Then Lugo pulled out a last treat: Elliot Del Borgo’s arrangement of “Classic Sinfonia,” which many of the eighth graders have been practicing this year. Lugo invited other students to play along if they felt ready, and to listen if they didn’t.

“Listen to each other,” he said. “If you know this, play it. If you just know the first bars too, play it.” 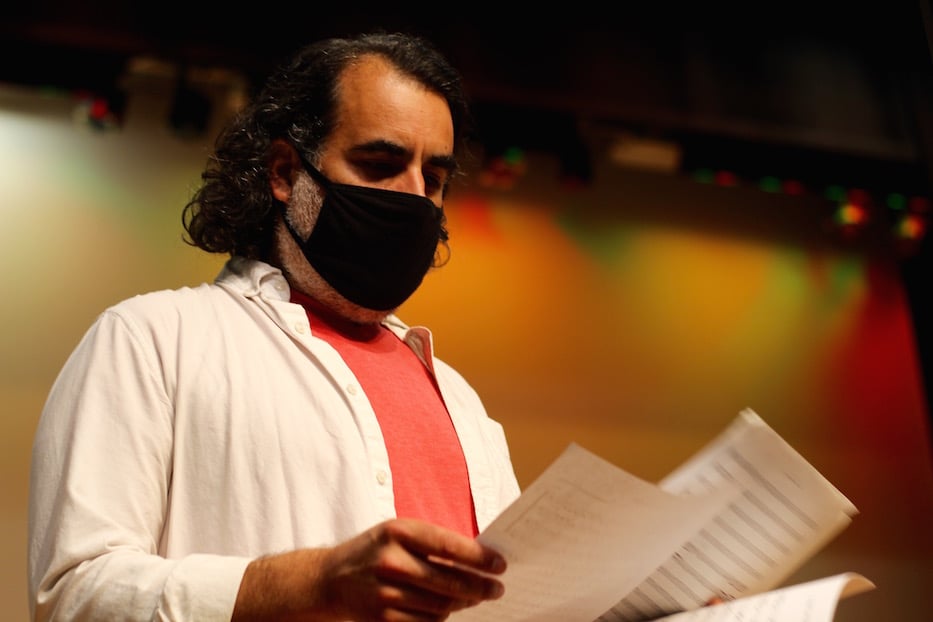 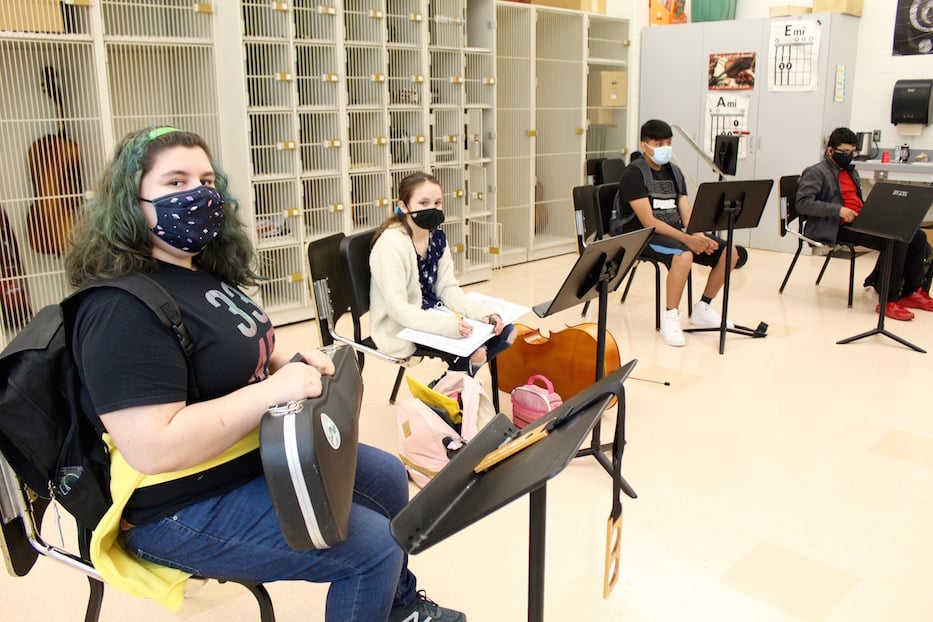 As students packed up, some savored the moment before a class bell got them moving. Eighth grader Destiny Blake, who has attended BRAMS since the fifth grade, said that returning to the orchestra helped give her a sense of closure on her final year at the school. During months online, Blake struggled with her violin. Strings would pop. She wasn’t as motivated to practice. Lugo helped her get through it. She plans to study dance at Co-Op in the fall.

“I pulled through,” she said. “It [playing in person] makes me feel better, ‘cause I can feel how well I play, and how well I play with the other people. Online, it’s just you by yourself, you and your instrument. Everybody together, it makes the sound come alive. By us playing all together, it helps the different types of instruments be more vocal.”

In Lugo’s seventh grade string class afterwards, Lauren Facenda said she’s excited to be back with the orchestra, particularly as she looks forward to eighth grade next year. During rehearsal, a click beetle landed on her violin as if to say hello and wish her all the best for the summertime. It seemed like a good omen.

“This is the first time I’ve played with school or with an actual orchestra,” she said. “I think it’s not as difficult as it first seemed. I’ve gotten better at it.”