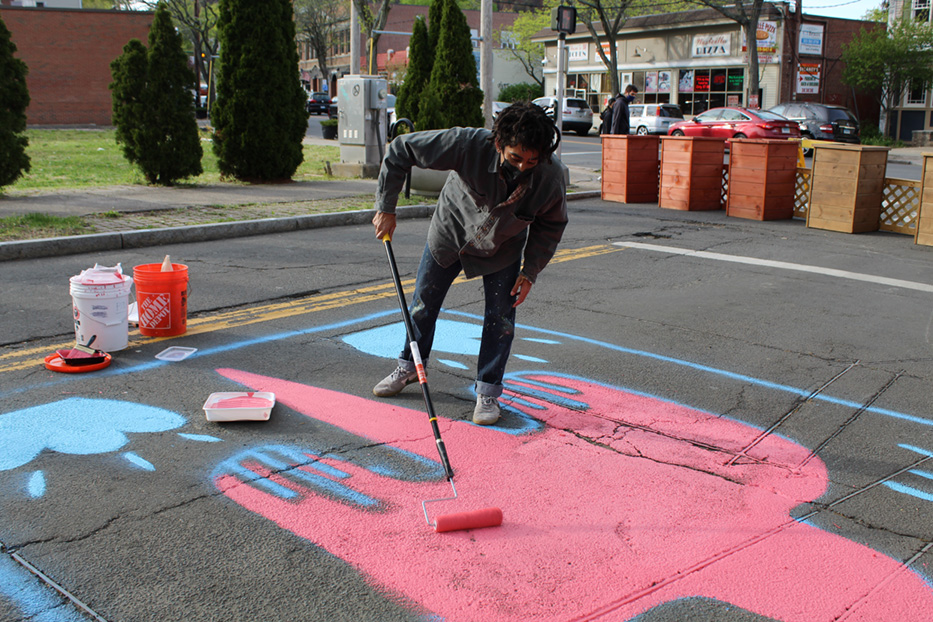 Noé Jimenez painting one of the four images that make up the street mural on Central Avenue. Arturo Pineda Photos.

Noé Jimenez dipped his roller into pink paint and covered the dark concrete with the image of a rosey bird. It sailed across a dark apricot sky and pale blue clouds. In the background, Camacho Garage’s lively latin music filled the air from nearby Fountain Street.

The mural painting on Central Avenue is a part of Westville’s Artwalk 2021, celebrations for which run now through May 8. The mural is a collaboration between the West Village Renaissance Alliance (WVRA) and artist Heather Gendron. The gathering marks the organization's first in-person event since March of last year. For a list of events, visit Artwalk's website here.

Thursday, painting began in a quiet, intimate sort of way (the mural was originally scheduled to go up Wednesday, but was rained out). Families and residents trickled in a few at a time to stop and admire the handiwork. Slowly, the image of birds flying across the horizon began to take shape.

Gendron said the design came from a variety of sources, including the pandemic itself. At the peak of quarantine, the artist noticed the hashtag #copingwithnature trending. It led her to think how she had coped with the pandemic through her own art—and the role art plays in helping other people cope.

She gave the example of returning home from her job as the director of the Robert B. Haas Family Arts Library at Yale to her studio. Once there, she’s  able to do “something completely different” from her work.

The mural's design also draws inspiration from the landscape of Southern New Mexico, with cool orange and blue pastels reminiscent of Southwestern sunset. In the second panel, a vibrant orange tree silhouette stands against a dark gray background. In the third panel, a stoic woman gazes at three smokey butterflies floating above her. 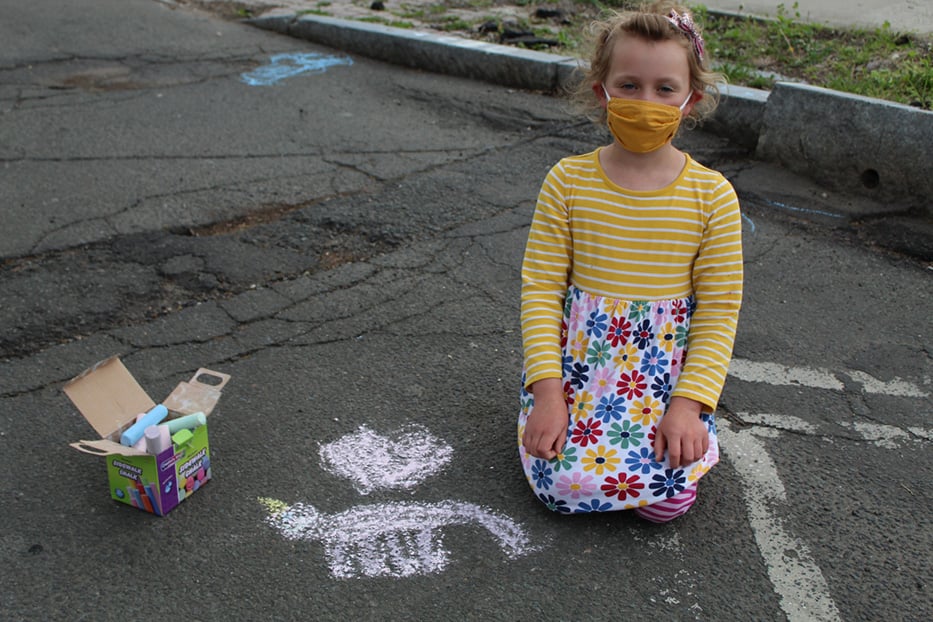 Ramona Pakulis standing next to her chalk pink unicorn.

Averi Pakulis, who moved to Westville from Washington D.C.  in January with her family, said the mural brings a diversity to the neighborhood—both in terms of culture and people.  Thursday, her daughters Ramona and Greer drew a unicorn and clouds respectively, using chalk on the road.

“We all deserve to see beautiful things around us especially for children,”Pakulis said.

She and her family chose to relocate to Westville because of its reputation as an arts and culture hotspot in the city. In D.C., she and her family  frequented the network of Smithsonian museums .  She wants her children to continue being around art as they grow up.

For Jimenez, the project manager at WVRA, the mural is a step in the right direction. An artist himself, he has not always seen the city as eager to collaborate with artists on public art. There does not have to be a rigid divide between the arts and the city’s infrastructure, he said. 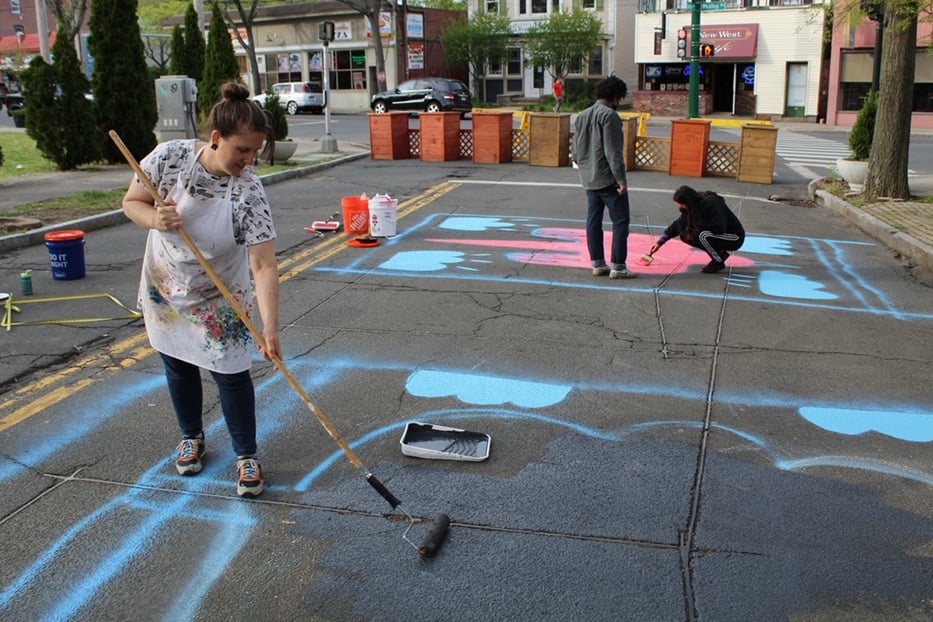 “There is a lot of opportunity for municipalities and artists to design public spaces that are both functional and aesthetic for the community’s well being,” he said.

In the future he hopes to see more collaboration with the city, so that art can become an organic part of  New Haven’s urban development. While there are plans to potentially shut down the block and convert it into a walkway similar to the Orange Street Promenade downtown,  nothing has manifested yet.

Joan Emmet, who has lived in the neighborhood for 15 years, viewed the mural as a sign that business and organizations are beginning to recover from the pandemic. She hopes that the murals will draw people to the area and hopefully drive sales for the surrounding business.

As dusk crept in, Gendron continued blocking out massive areas of color alongside Jimenez and her husband, the artist Edwin Gendron. They took the time to fuel up on a slice of pizza, and then got back to work. The mural painting will continue Friday evening and Saturday morning.