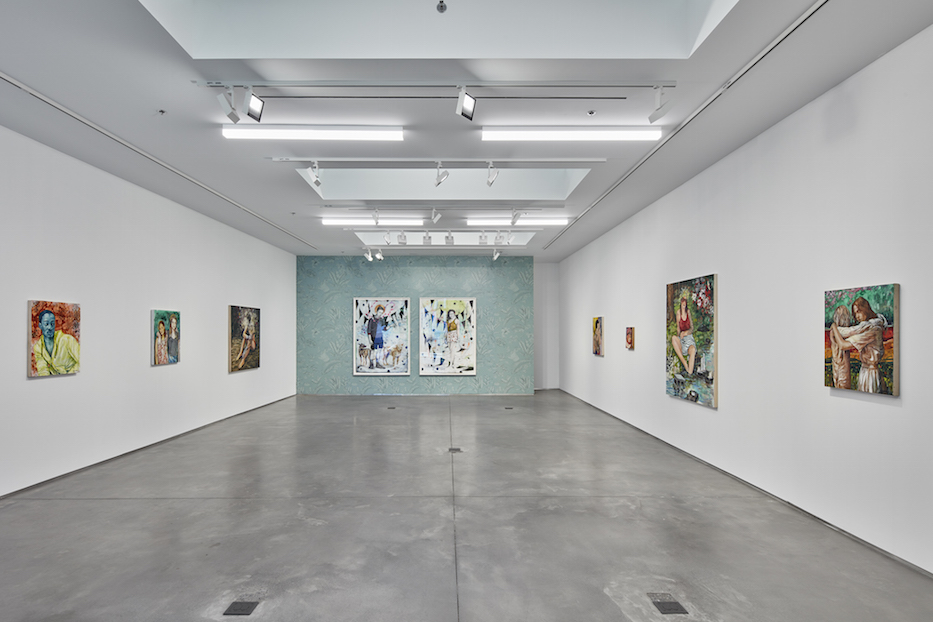 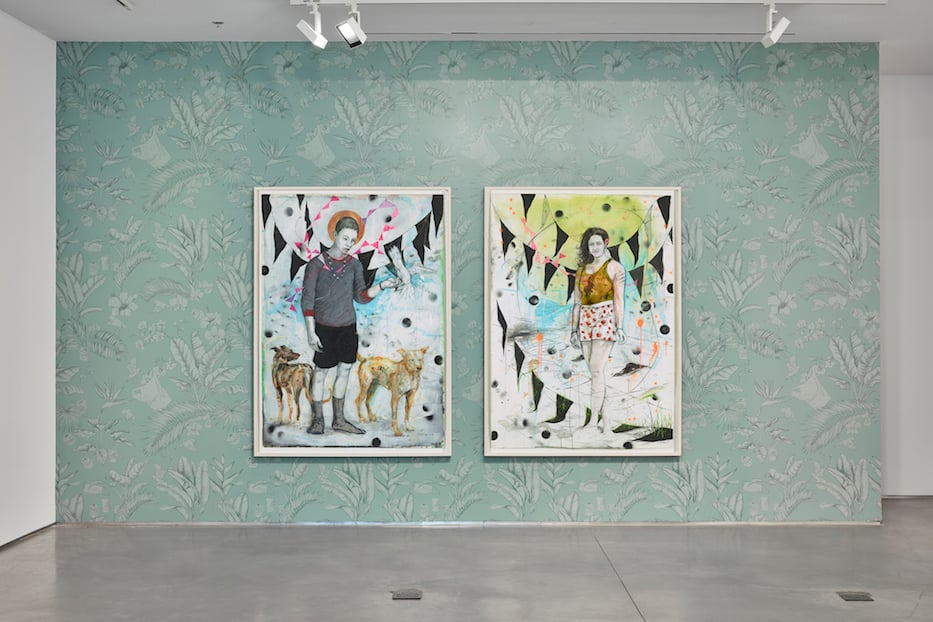 On the central wall of NXTHVN’s gallery, a mint green wallpaper with broad, tropical leaves and large flowers has an unexpected twist: crumpled aluminum cans and discarded plastic bags. The subdued palette and imagery of Tropical Sublime, a collaboration between Someone & Somebody and artist Christian Curiel, recall the designs of the British textile and wallpaper designer William Morris. And yet, the corruption of the scenery has a contemporary edge. The lushness of the vegetation pierced by bits of trash indicates there’s more than meets the eye in this exhibition.

In Christian Curiel: Between Reveries, scenes that appear mundane begin to unravel. This view of the world exposes the vulnerability of the people who inhabit it. Curiel’s characters mostly fall into one age group, early adulthood. Born in Puerto Rico and raised in Miami, the artist draws from Latin American culture as he envisions worlds that are fraught with fragility. His narrative paintings and large-scale drawings, often standalone portraits or small groupings of figures, comprise NXTHVN’s first solo exhibition on view through Nov. 28.

A sense of magical realism runs through the exhibition. In many cases, Curiel sets up a sense of tension between the representational and decorative elements within the works. In his 2021 Rituales, a young woman stands waist-high in water. The gray overtone to her hair somehow results from many pastel hues of blue, pink, and yellow. Her hands rest under the water’s surface while several floating candles populate the foreground of the painting. 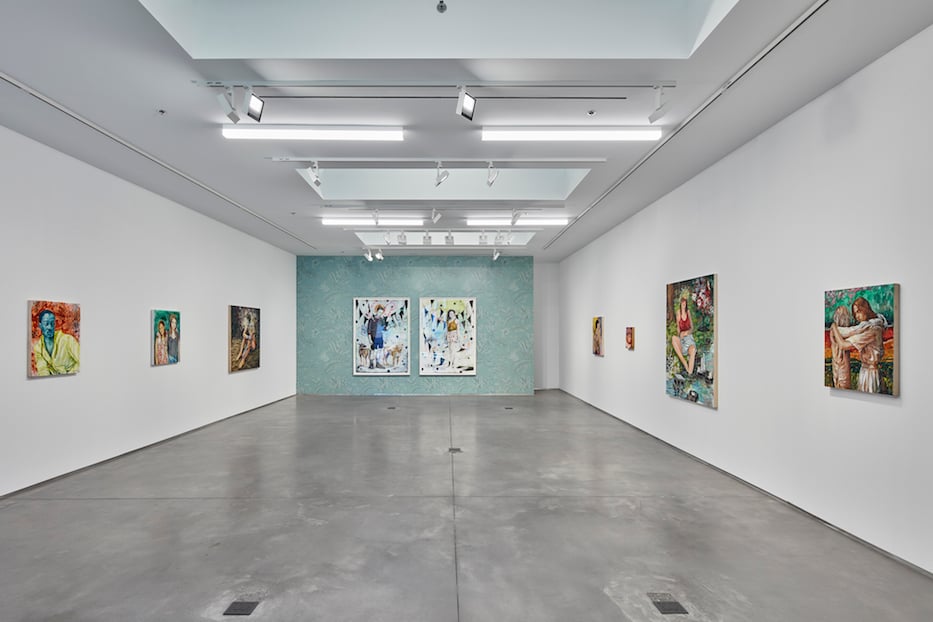 However fantastical, this baptismal scene remains mostly believable. Still, moments of thick., impasto texture and splashes of metallic paint disrupt the space. The physical texture of the paint in places causes breaks in the illusion. At once, Curiel creates and suspends reality. His seamless integration of both flatness and depth is a pictorial challenge accomplished by few.

As a whole, Curiel’s paintings have a tonal quality to them. His practice feels rooted to the drawing, and several paintings contain areas where he has limited his palette. From above the neck, the protagonist of Mystique is rendered with varying values of only brown, yet a cloud of more colorful flowers float around her face. At times, he delights in a rainbow of hues, while in other places, the color feels drained from the composition.

There are moments in the show when Curiel’s drawing goes awry. A forearm is flattened, a mess of brushstrokes represents an awkward hand. Curiel guides a viewer’s eye around and through his layered compositions. Viewers pay attention to the places that exude visual delight and the pleasure that the artist derives from the process. A viewer soaks up the dreamy auras of Curiel’s environments, less so the anatomy of its figures. 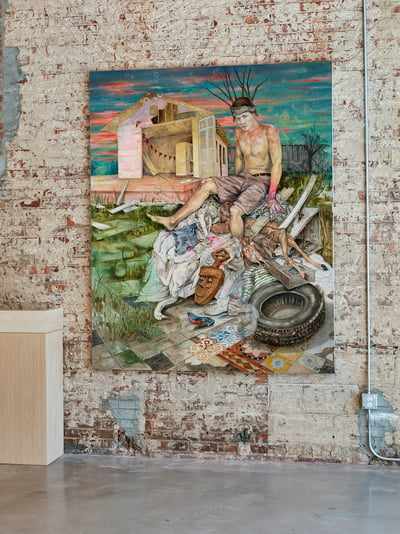 Curiel’s worlds are mystical, but the environments are never idealized. Many of the paintings are set outside among cinder blocks, refuse, and other bizarre details. Curiel often blends religious iconography—haloes and votives, for instance—with aspects of contemporary culture such as heavily tattooed flesh.

In Reina, painted this year, a woman has blood or possibly red paint smeared around her eyes. Under a crown of flowers, she looks directly at a viewer. Intricate patterns cover her arm, repeating in the lacy designs on her shirt and the stenciling in the space behind her. Here, Curiel seems to have captured an unknown ritual, and her relaxed posture is non-threatening despite the potentially violent reading of the scene.

Elsewhere, the religious undertones are more apparent. A white dove lands on the extended figure of the man in the diptych Power Couple, which Curiel started in 2019 and finished this year. The gesture feels culled from Christian altarpieces among Western art history. In this piece, it’s unclear if the figures are inside or outside. Nondescript black flags that fly around the white backdrop evoke an otherworldly sense of space, if not an exact or recognizable setting.

The paintings of indoor environments are often more closely cropped around the figures, emphasizing the interiority of the emotion depicted. For example, Be-Wildered is a portrait of a man whose neck is a swirl of tattoos. Above his head, bright pink flowers form a burst with several cosmic, emanating lines. Transfixed, his gaze focuses on something outside the picture plane, and he seems blissed out, possibly via artificial means.

An ethereal current underpins the exhibition, while Curiel’s titles and imagery hint at relevant topics related to identity such as gender transgression or transitioning. In Sister, Sister, the gender of the figure facing the viewer appears nonbinary. Similarly, Todo Pasa presents two figures: the more masculine one on the left is ghostly and pale, while the more feminine form on the right has full color. 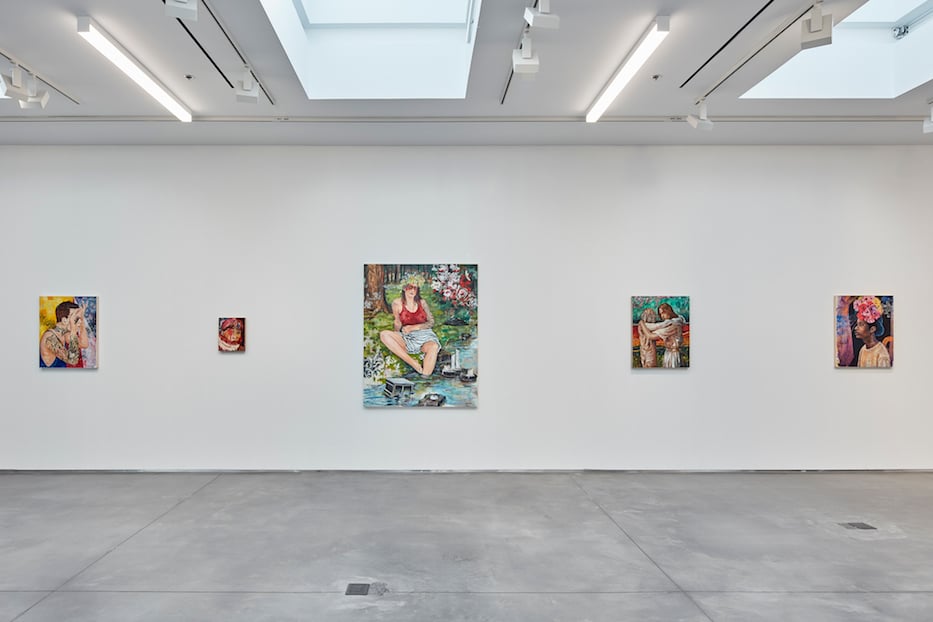 Curiel’s interests and his formal strength as an image-maker shine in Skin, a standout, smaller-scale portrait in the show. A young man lifts a black, beaded necklace onto his neck, a gesture that recalls an indirect sense of anointing. His hands cover his eyes. A viewer can see the nose and mouth of the young man, while a hand tattoo of fruit aligns with the placement of the hidden eyes. Snakes, foliage, and religious symbols creep up his arms and onto his neck, while similar tropes are mirrored in the space around him.

As with the wallpaper, this painting combines a pastiche of elements from various times and cultures, and together, these references evade a straightforward understanding. Curiel lures a viewer to the appealing surfaces of his works, but the imagery scratches beneath the proverbial skin. In different ways, Curiel’s figures seem to confront the challenges of coming of age at this moment in time. Far from ordinary, the unifying state within Curiel’s works is trancelike, but over time, his characters seem unsettled, sometimes comfortably so, as the scenery becomes unhinged.

Christian Curiel: Between Reveries runs through November 28, 2021, at NXTHVN. To find out more about the gallery’s hours, visit its website.