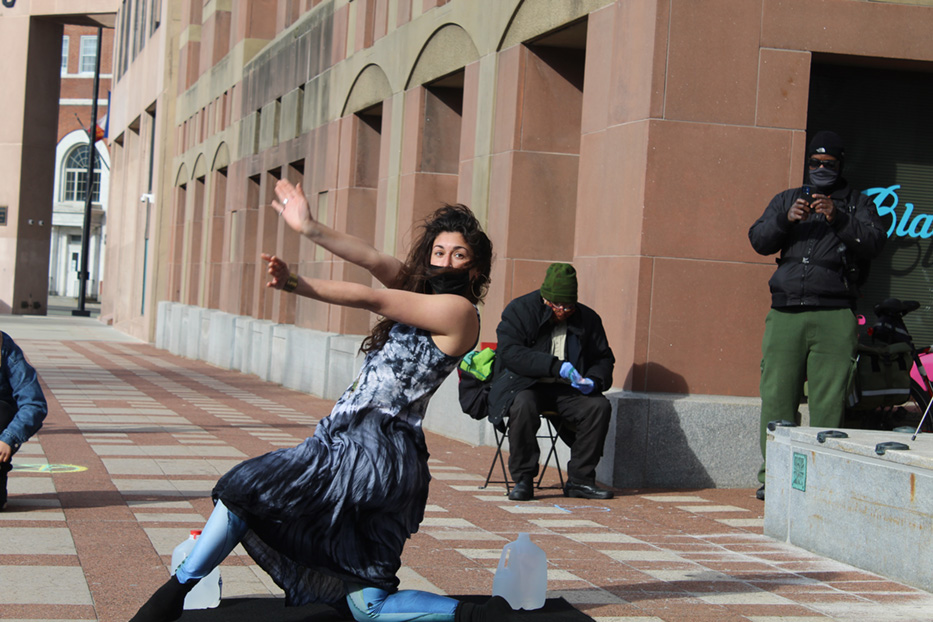 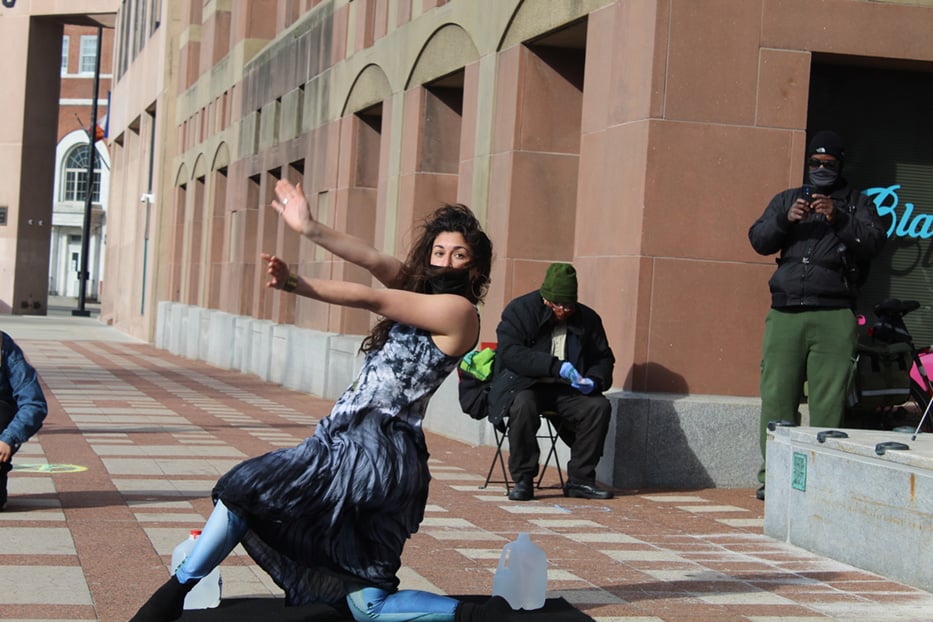 Natalia Katz dance to Panchama by Beautiful Chorus as part of an Earth Day Peace Celebration in front of the Amistad Memorial. Arturo Pineda Photos.

Natalia Katz swayed to the tune of “Pachamama” by Beautiful Chorus as she danced a tribute to Mother Earth. She embraced the heavy gusts of wind, letting them guide her limbs as she slid across the mat and kicked her legs. The Amistad Memorial outside City Hall became a sun-soaked backdrop.

More than 25 people gathered outside City Hall on Thursday for an Earth Day Peace Celebration co-organized by the New Haven Climate Movement, City of New Haven Peace Commission, Connecticut Climate Crisis Mobilization and the Greater New Haven Peace Council. The celebration followed the non-binding referendum passed in 2020, in which 83 percent of New Haven voters supported a cut in military spending and investing in an environmentally sustainable economy. 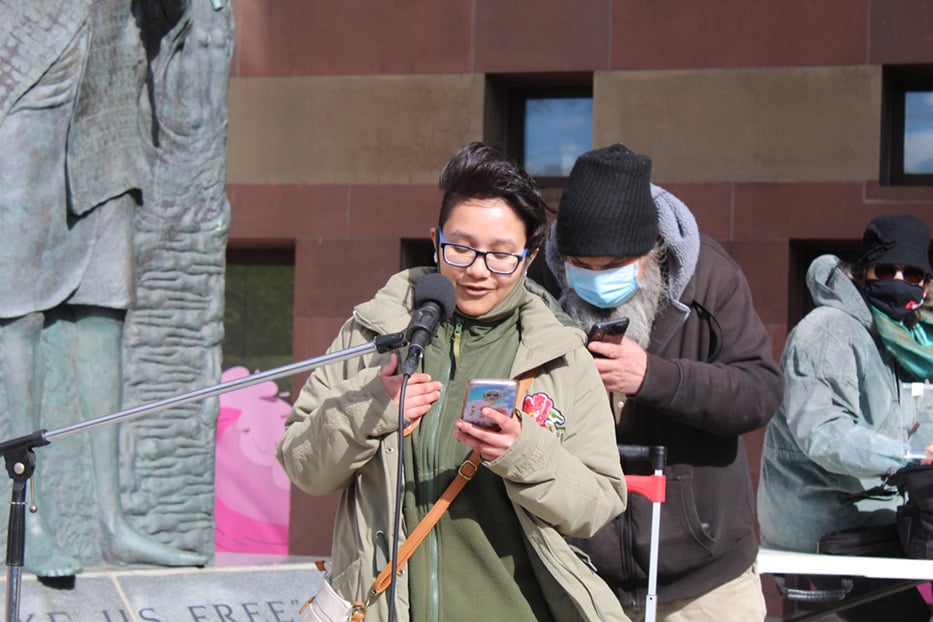 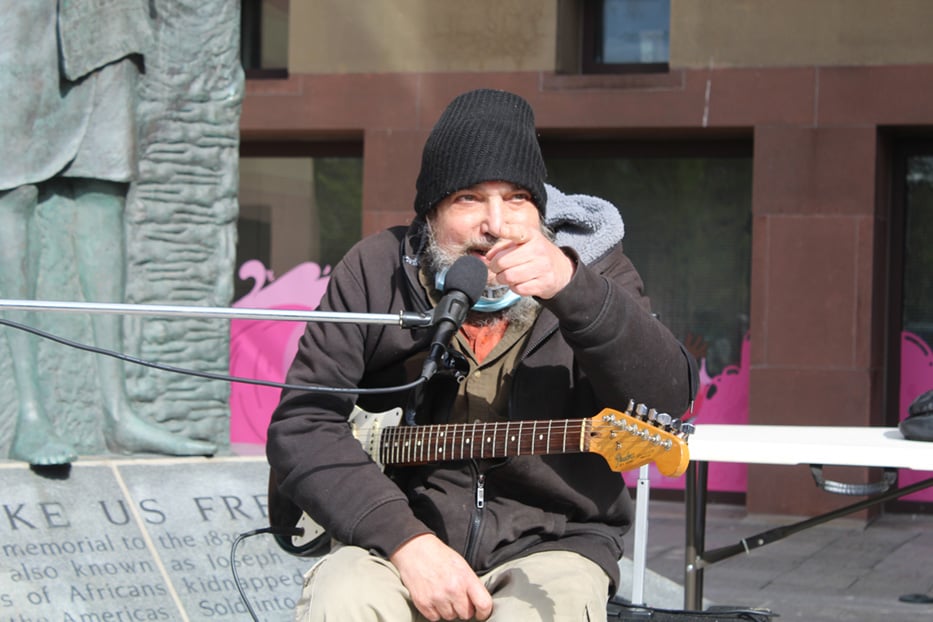 Top: Adrian Huq. Bottom: Freddy B performs his rendition of John Lennon’s “Give Peace A Chance.”

The decision to celebrate Peace Day and Earth Day as one joint celebration was a natural one, said Huq. The same fossil fuel industry that supports the military also degrades the environment. It contributes directly to climate change and impacts people’s livelihoods.  As speakers took the mic, representatives from New Haven Friends, Sunrise Movement CT, New Haven Rising and others spoke about the need to decrease military spending, address climate change, and invest in the city’s most vulnerable communities.

Over and over, many of them painted climate justice and racial justice as intimately related to each other.

The impact of climate changes is not only directly visible in the environment, said Huq. It drives civil war, food and resource scarcity, and climate-related patterns of immigration and refugees seeking safe homes. They  pointed to the number of recent climate refugees from Puerto Rico that relocated to the city after earthquakes and Hurricane Maria.

“Our investment in the military comes at the cost of under investing in other areas, including human needs and sustainability,” Huq said. “Even while New Haven is facing a critical financial crisis,  taxpayers are paying a total of $166 million per year to the federal military budget, and that's the figure for 2021.”

Throughout the afternoon, speakers said that military spending could be better spent by investing in the community. Of the $750 billion dollar U.S. military budget, some suggested that $10 billion could provide increased medical care for one million military veterans for a year. Or 100 billion could be invested to create almost 1.5 million clean energy jobs in one year. With $87 billion, roughly 10 million public housing units could be built. 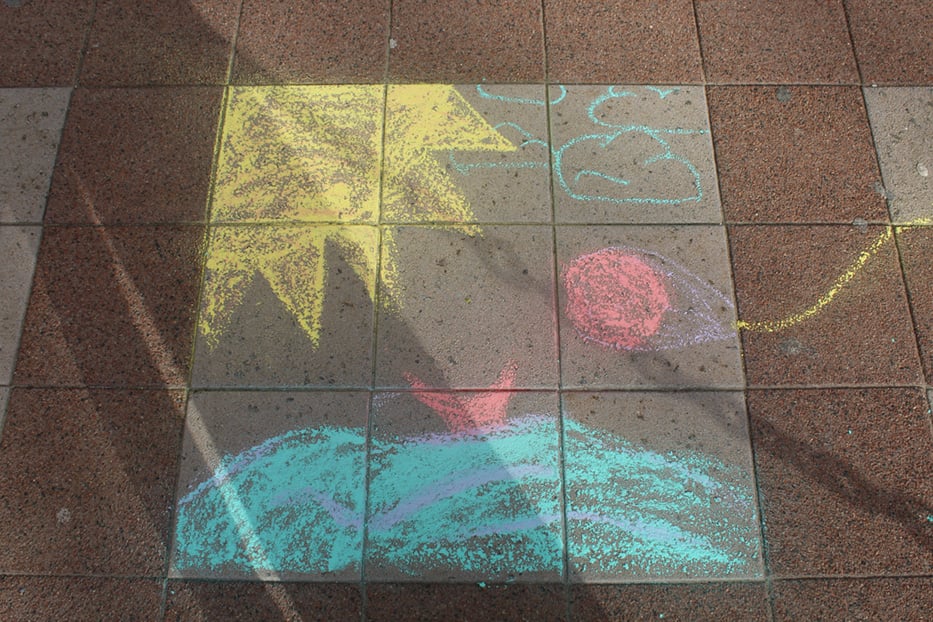 Song, dance, and poetry were woven into the event, often in praise of both Mother Earth and of peace. Metro High Schooler Amy Rodrigues performed the poem “Mother Nature,” describing Mother Nature’s generosity towards humans, and human destruction of her bounty in return.

“She says, ‘Keep your strong, loving ways,' but she grows sorrowful as we tear through the forests and mine her soil, and hurt one another,” she read.

Marcey Lynn Jones and Earl Ali-Randall performed an upbeat performance to West African beats, moving with and against the gusts of wind that surrounded the celebration. As they lifted their arms and legs in unison, their enthusiasm for the surrounding earth made it impossible not to move. Watch that here.

For Johanyx Rodriguez, a senior at High School in the Community and member of the New Haven Peace commission, the issue touches on race and class across New Haven.

“It's very very important to have our voices heard, because problems like climate change affect Black and Brown communities,” she said. “We live in places where there's air pollution in our neighborhoods' highways right in our backyard, and that's not acceptable because as a result, we all suffer from it … we should be the forefront of people fighting climate change.”

“There’s a saying that people love to hear about Black issues but not Black people, which is true because like a lot of people don't listen when Black people speak.” she said. “It's really important to have Black leadership so white people aren’t representing us.” 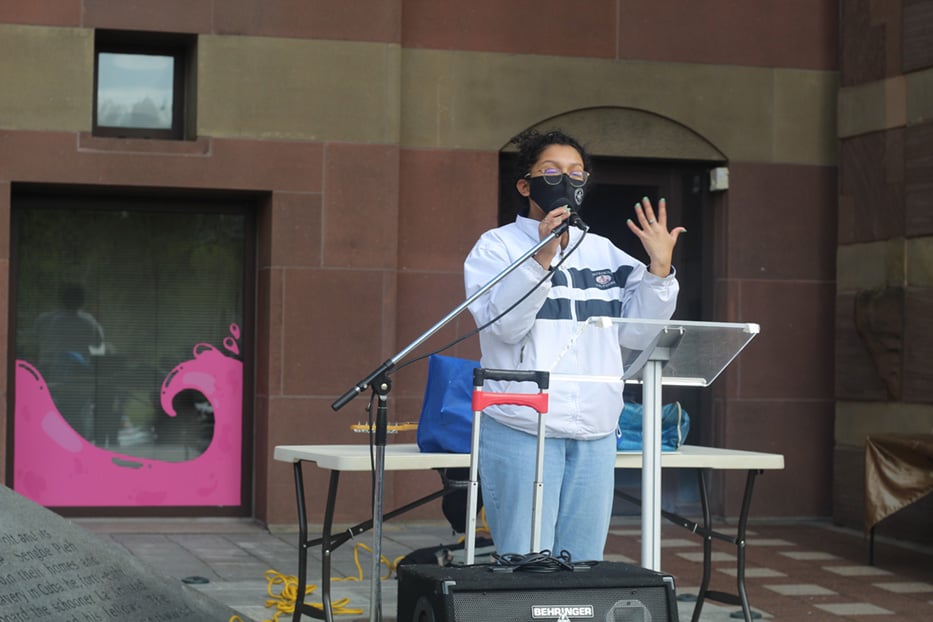 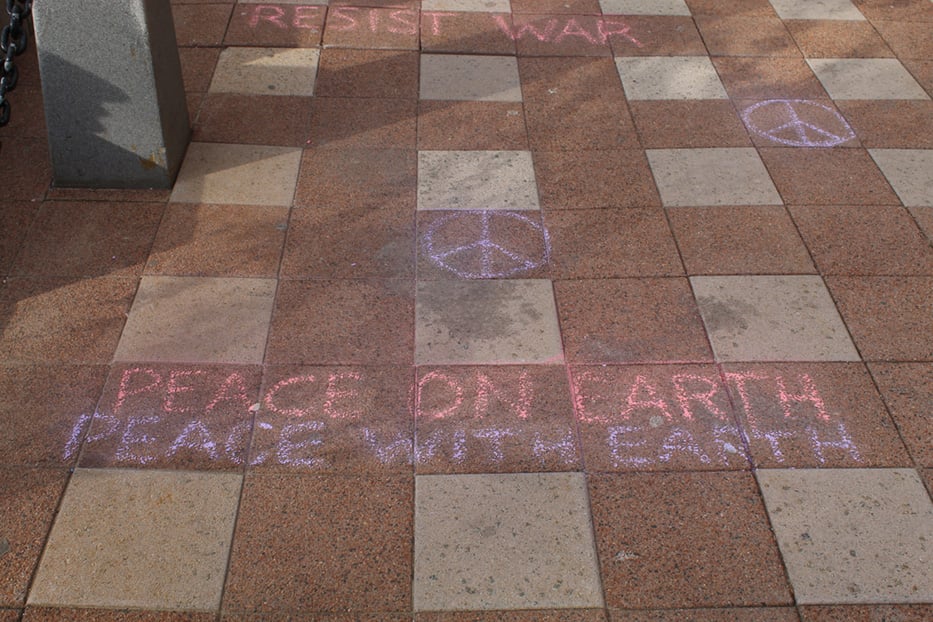 Throughout the event, attendants drew comforting images of natures like coral reefs or green pastures with a radiant sun. Others leaned into finding peace with vibrant peace signs and slogans like, "Peace on Earth / Peace with Earth."

In a separate interview, Citizens Campaign for the Environment  member Louis Rosado-Burch spoke about the need to address the growing solid waste disposal crisis faced by the state. The Hartford-based incinerator Materials Innovation and Recycling Authority (MIRA) closes doors in July 2022.

The plant processes 500 million tons of waste, or roughly one-third of the state’s solid waste. With the closing, the state will have to increase its shipment of waste to outside states, drastically increasing the carbon footprint. 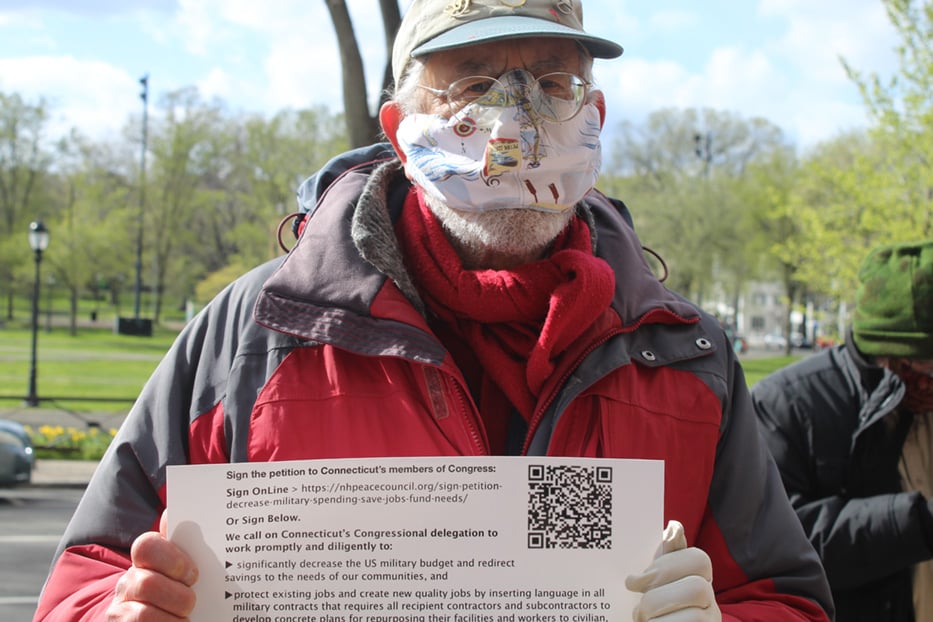 “The Mira incinerator closing down is a step in the right direction for environmental justice,” he said. “But we need a plan in place to deal with all this waste.”

To address the waste, Citizens Campaign for the Environment has been pushing to expand the state’s bottle bill to both include more types of bottles, like nips of liquor, and implement bottle machines in retail chains like Stop & Shop and CVS for increased access. In addition, the bill would aim to increase the security deposit from five cents to ten cents to encourage more recycling.