HSC Seniors To Freshmen: Keep Your Head Up 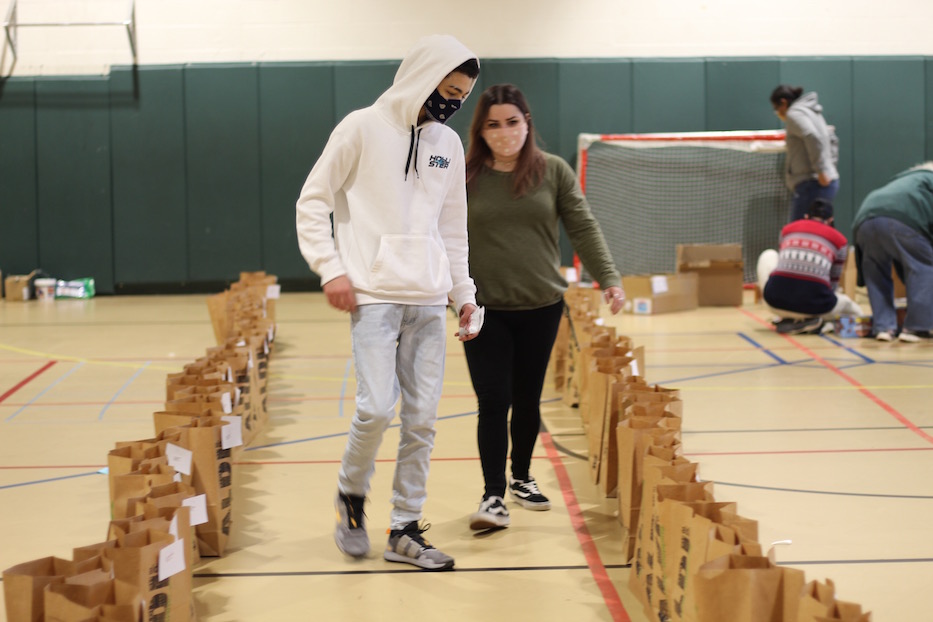 Matthew Reyes is not having the senior year he imagined. Before this fall, he envisioned sun-soaked classrooms, laughter-flecked school lunches and afternoons with his friends before they headed to different colleges. Instead, he’s home with four siblings, watching classes on a screen and helping them with homework.

On a recent Tuesday, Reyes joined a handful of seniors at High School in the Community (HSC) to pack COVID-19 care packages for members of the school’s freshman class. The initiative comes out of the school's senior seminar, in which students design peer-led community service projects as part of their final year at the school.

Each care package includes markers, post-it notes, a miniature journal, books, winter gloves and a hat, and a stress ball. In addition, nearly every student in the senior class has written a personalized letter to a freshman. Because there are 60 seniors and 75 freshmen, some of the seniors have doubled up.

“Everybody was just feeling really down about the year,” said magnet resource teacher Dianna Carter. “We thought, let’s do something that starts to heal our school.” 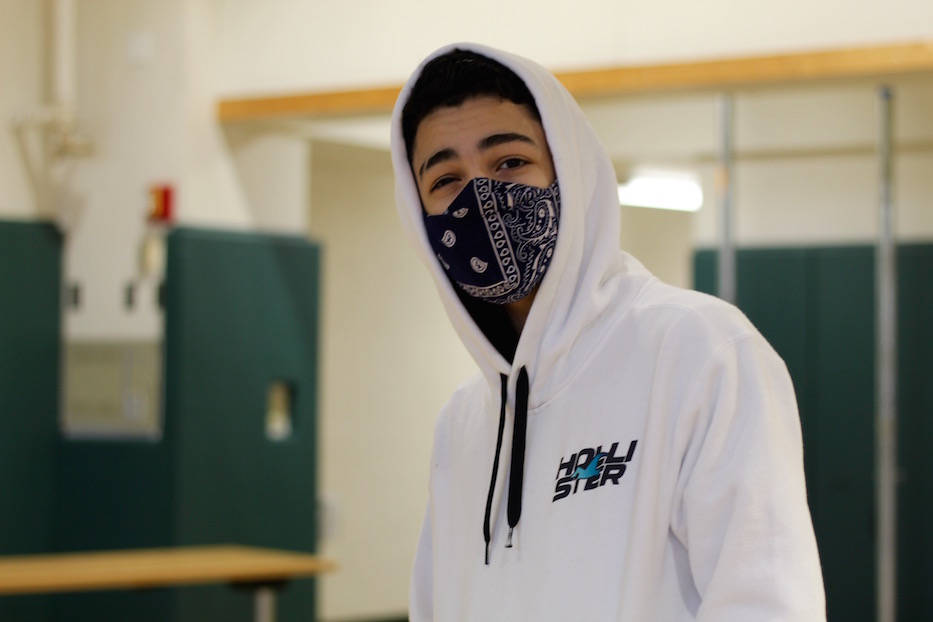 Matthew Reyes: "I can’t imagine transitioning into high school like this."

Normally, HSC freshmen take a class trip together at the beginning of the school year, as a chance to meet each other and start gelling as a class. Students in the class of 2024, however, have been in school remotely since March. They finished eighth grade online. While HSC held a laptop dropoff before the school year began, most students haven’t met each other or their teachers in person.

As he walked around the school’s gymnasium assembling packages, Reyes said that he feels for the younger students. His freshman year, he formed some of the friendships that have gotten him through the last four years. Now he spends his days in remote classes and helping his four younger siblings with homework.

It’s hard, he said. When one of his siblings has a question, the teacher doesn’t always answer it. From the family’s home in the Hill, he’s become a sort of de facto substitute. The house is never quiet, making it harder to concentrate on his classes. In the midst of it, he’s also been applying to colleges. He hopes to attend the University of Connecticut and study nursing.

“This year has been a lot,” he said as he tossed black markers into individual bags for each freshman. “It’s been crazy. Not being able to physically be with people—it sucks. It’s harder. But I can’t imagine transitioning into high school like this, like if I didn’t get to do anything [in-person].” 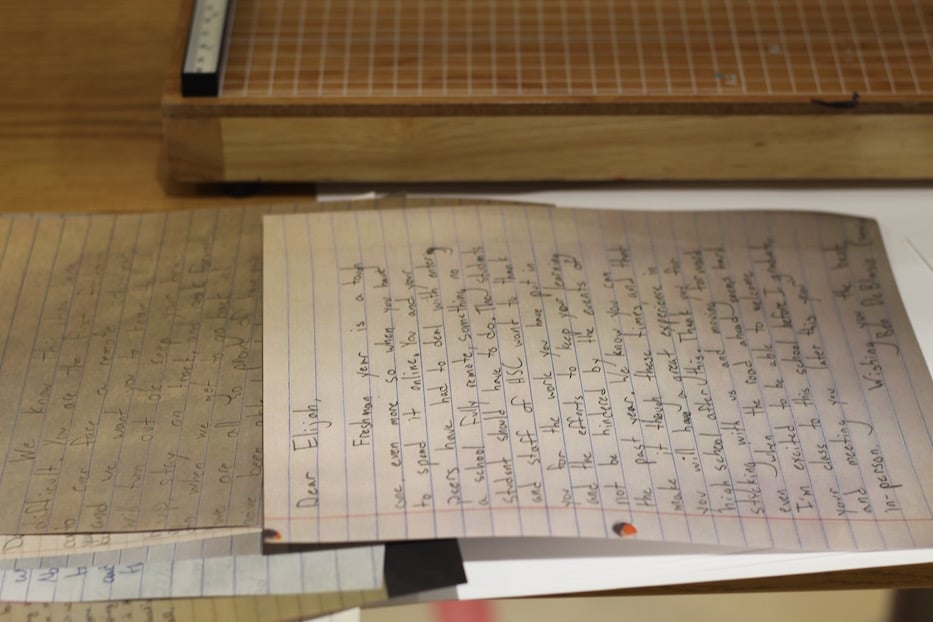 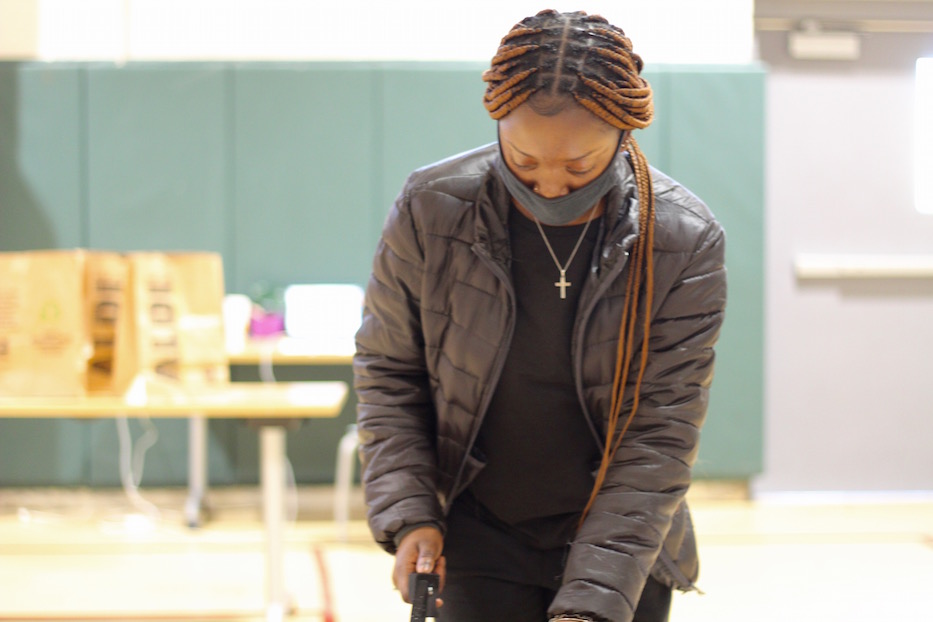 As he walked through the gymnasium, Reyes waved to other seniors he hadn't seen since March. At a paper trimmer propped up on a table, 17-year-old Kaila Bolden trimmed scans of letters that seniors had written to the freshmen. Her hands fell into a rhythm, straightening out the scans before slicing them neatly.

“Dear Elijah,” read one that sat beside her. “Freshman year is a tough one, even more so when you have to spend it online. You and your peers have had to deal with entering a school fully remote, something no student should have to do. The students and staff at HSC want to thank you for the work you have put in and the efforts to keep your learning not to be hindered by the events of the last year. We know you can make it through these times, and that you will have a great experience in high school after this.”

“Dear Jaden, we know this has been difficult,” read another. “Keep your head up.”

This year “is not bad, but it’s not great,” Bolden said. As a music student, she hasn’t been able to play the bass with her classmates for months, and worries that her skills are slipping even though she makes time to practice. She’s had trouble completing college applications because she doesn’t know what she wants to study.

She added that she knows she’s not going through it alone—many of her friends and classmates face the same challenges—but sometimes that’s hard to remember when it’s just her and a single screen. 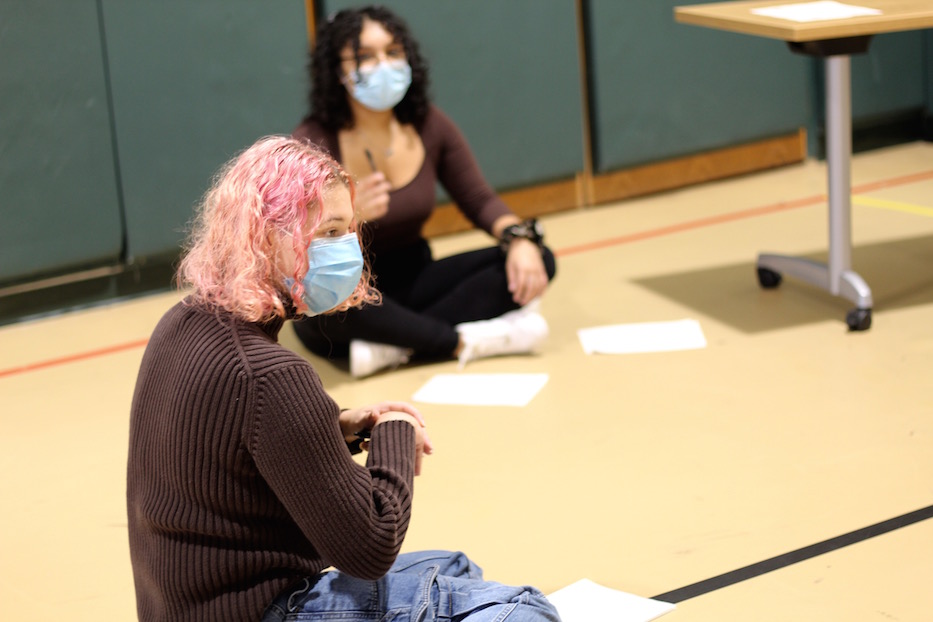 On the floor nearby, friends Hallie Hushion and Johanyx Rodriguez sat writing letter after letter, their words of encouragement blooming across lined paper in blue and black ink. Neither envisioned doing AP classes and college applications virtually, they said.

For Hushion, braving the remote pivot has felt exhausting. This fall, they’ve balanced seven classes with college applications from a laptop at their dining room table. Soccer, once their extracurricular outlet, is now too hard to get to. While they’re in class online every day, they haven’t seen most of their friends since March 12. They called texting a poor substitute for in-person contact.

“I’ve been keeping up well, but online learning is such a weird environment in several ways,” they said.

Tuesday marked their first time seeing Rodriguez in nine months. As the two chatted through medical masks, they made sure to sit at least six feet apart. Both are finishing up college applications this month, Hushion with an interest in public health and Rodriguez with one in molecular biology. 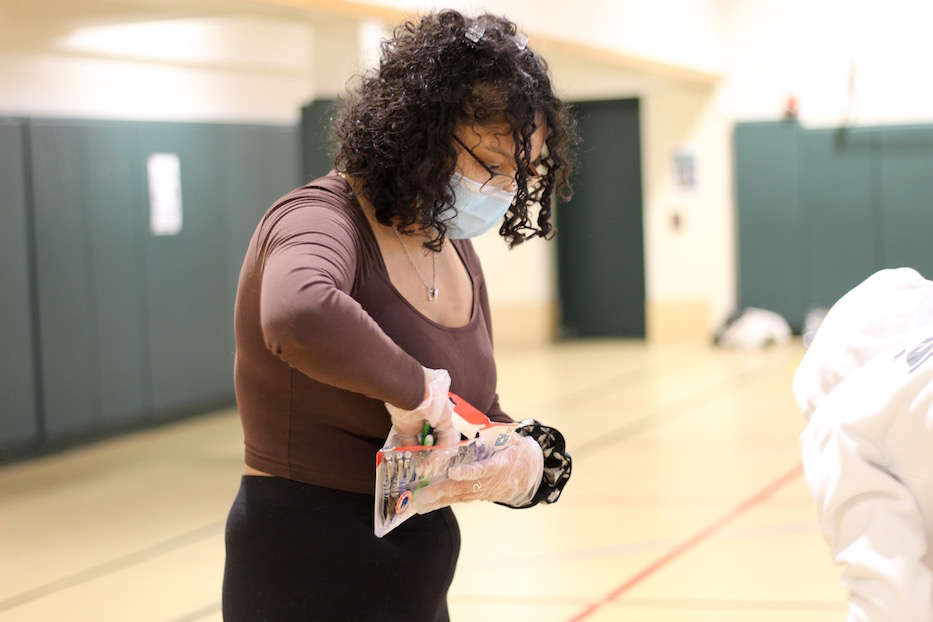 Johanyx Rodriguez has been working on 12 college applications online. Her top choice is Boston College.

Rodriguez said that she’d come out to help Tuesday because she can’t imagine what it feels like to be a freshman in a new school, where you don’t get a chance to meet your teachers and classmates in person. Her senior year is upside down too—her bedroom is now her mom’s office—but she knows how to get through it.

“I was once a freshman too, so I know how it feels,” she said. “But this year is different. It’s different than I thought it would be.”

Just after 3 p.m., an icy gust of wind blew through the school’s side door. With it, friends Ayao Tossah and Robert Cardone arrived to help with the last half hour of packing. Tossah said this year has been hard for him: at home, he sits at a table where he can take classes and keep an eye on his two younger siblings. Cardone has started skipping classes for 11-hour shifts at the Amazon warehouse in North Haven. Both had come to make the year feel a little easier for the underclassmen, they said.

It hasn’t just been hard for the students. As he helped Reyes at a six-foot distance, English teacher Rey Santiago said it was the first time in almost ten months that he’s seen that many HSC students in person.

While the school reopened for one day of SAT testing earlier this year, it has been otherwise eerily quiet. Chairs still sit empty and flipped atop round tables in the unlit cafeteria. The hallways are empty when they should be full of conversation. 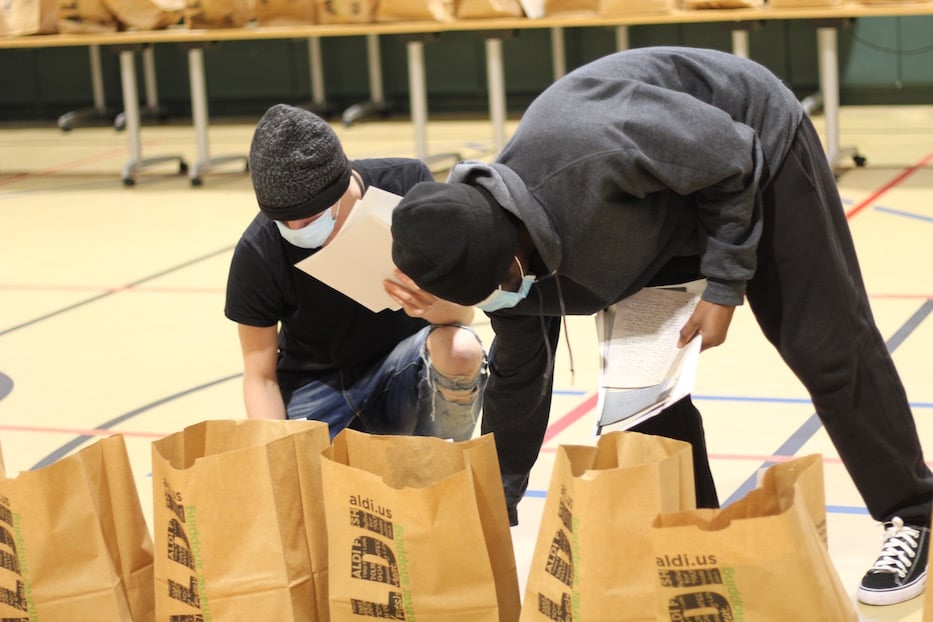 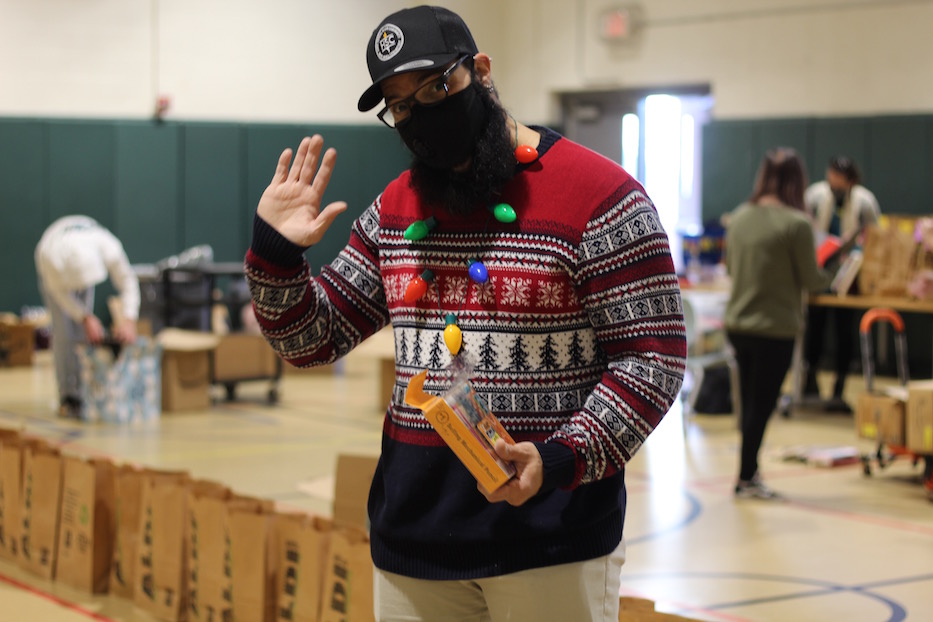 In class, Santiago has been teaching his students about news writing and op-eds, including asking them to write their own. He said that teaching online makes it harder to feel connected with his students. Many of them have never turned their cameras on. Sometimes it feels like he’s talking into a void.

“There’s a lot less responsiveness,” he said. “It’s harder to read a room when you’re not in a room.”

While one in three students across the district has been marked as chronically absent, Building Leader Matt Brown said that logging on hasn’t been the school’s biggest hurdle. Instead, it’s “consistent engagement” that students seem to struggle with in their classes. He praised a new advisory system based around “flight crews” that the school rolled out at the beginning of this year (read more about that here and here), but noted that engagement is entirely different when class is not in a physical classroom.

“I do think we’re seeing this focus on zoning in what matters most, which is community,” he said. 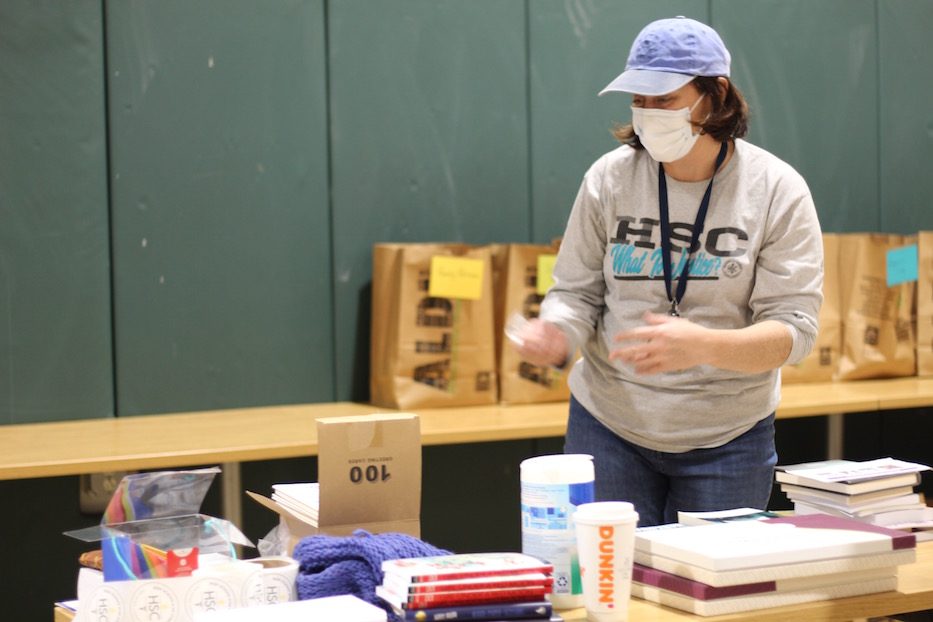 Senior seminar teacher Jennifer Sarja added that several of the school’s seniors have expressed an interest in longer-term mentorship opportunities for the class of 2024. In the meantime, she holds a remote Saturday breakfast club and drop-in online study hall to keep the lines of communication as open as possible. She said the school plans to mail or distribute the care packages to freshman in January, as a welcome back after the holiday break.

“It’s been a nutty year,” she said. “It has been really cool to hear the seniors talk about how they want this to be a beginning. They’re worried about how lost the freshmen feel.”