A large orange octopus now sits at the corner of Mill and Wolcott Streets, spreading his tentacles from the sidewalk to the storm drain below. He looks gentle, with huge, supplicating eyes and a head that swells with sunlight-colored paint. Fish swim happily in the crosswalk around him. A green turtle peeks out from a section of curb, as if to say hello.

But they bring a word of warning: New Haveners might want to think twice before flicking their cigarette butts, used motor oil, and trash into the street, unless they want to poison their aquatic friends.

The design, brought to life with latex paint, is a composite of drawings by Martinez students completed earlier this year. On Friday, students from both schools will join Save The Sound and members of the Mill River Trail Advocates for a tour of Robert Greenberg's Lost In New Haven collection.

“The changes in weather patterns that we’ve already been seeing are going to get worse,” said Save the Sound Watershed Coordinator Nicole Davis, noting that increased heavy rainfall and frequent flooding are among the most harmful. “With storm drains, that means everything that you see—the dirt, litter, cigarette butts—goes into the [Long Island] Sound.” 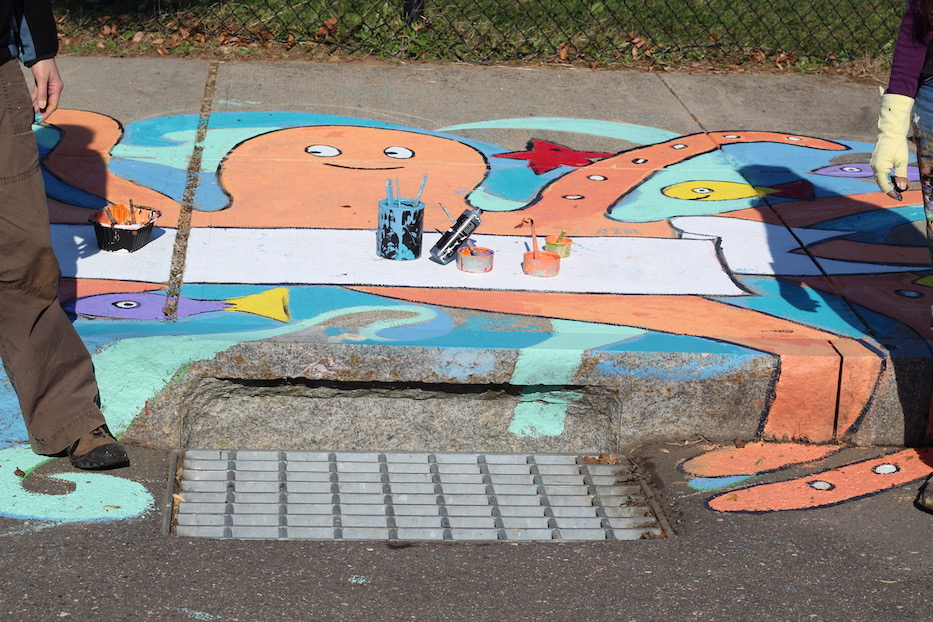 For Cold Spring students, the lesson comes right on time. In their classrooms, fourth and fifth graders have been learning about waterways through an educational computer program called EcoMuve (Multi User Virtual Environment), which simulates a pond landscape during the summer months. While the program was originally designed for middle and high school students, Cold Spring teachers have found that it works for slightly younger kids as well.

As they use the program, students are able to take “samples” from the pond, measuring water for dissolved oxygen, pH, phosphates and turbidity. At some point during the season, there’s a massive fish kill, meaning that fish die off due to a change in the quality of their water. Maybe it’s oxygen depletion from newly dissolved phosphates in the pond. Maybe it’s an algae bloom. Maybe someone has over-fertilized a nearby lawn. Students are left to figure out what caused it, exactly when, and why.

While they have gotten a few chances to apply that knowledge in the real world—students did testing with the Regional Water Authority earlier this year, at a Hamden section of the Mill River—most of the learning happens inside a classroom, at a computer. So much so that the chance to apply it through public art and discussion with Save the Sound “is really a gift,” said Curriculum Specialist Joshua Sloat.

As they worked, students spread out over the sidewalk, divvying up sections of the mural as they traded cups of green, blue, red and orange paint. Working just above the storm drain, 9-year-old Isha recalled learning about marine wildlife in second grade, and becoming instantly enamored of what she saw beneath the water’s surface. Now, she brings that to everything she can, from her lessons in EcoMuve to reminders to her parents and peers not to litter. 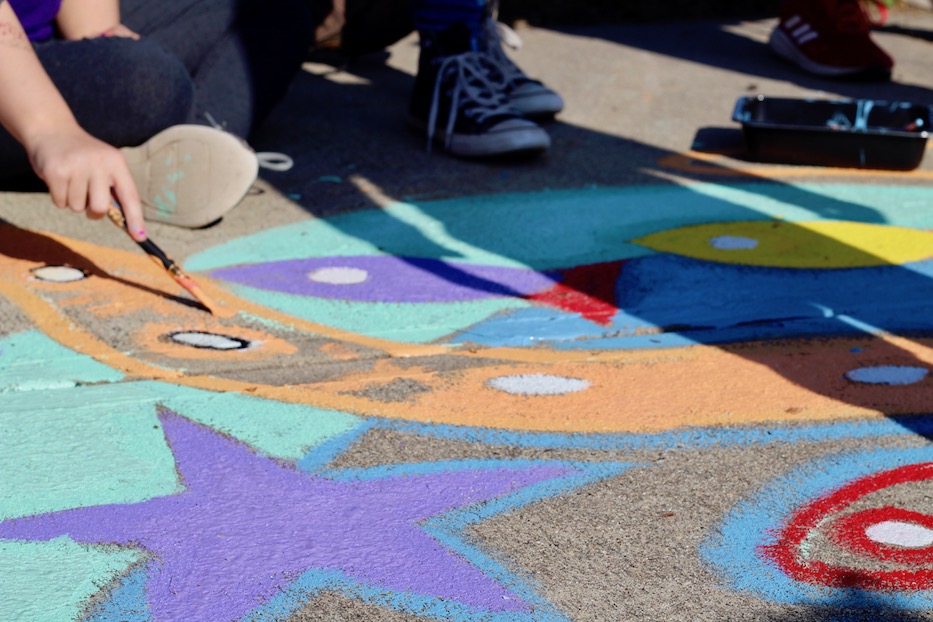 “It’s a really big problem,” she said, focused intently on pinky-orange tentacle that bloomed in front of her. “These marine creatures are dying … and it’s like, everybody sees what’s happening all around them.”

Beside her, fellow 9-year-old Willa said that she’s planning to be an environmental activist (she praised 16-year-old Greta Thunberg). Through both her classes at Cold Spring and her lifelong love of animals, she said she’s become angry and frightened at how quickly climate change is moving, a trend that has already caused massive ice melts in the Arctic, wild fluctuations in temperature, the hottest summer months on record, and fish kills less than half a mile from her school.

“Everyone knows about climate change,” she said. “They know the science. They’re just not doing anything about it.” 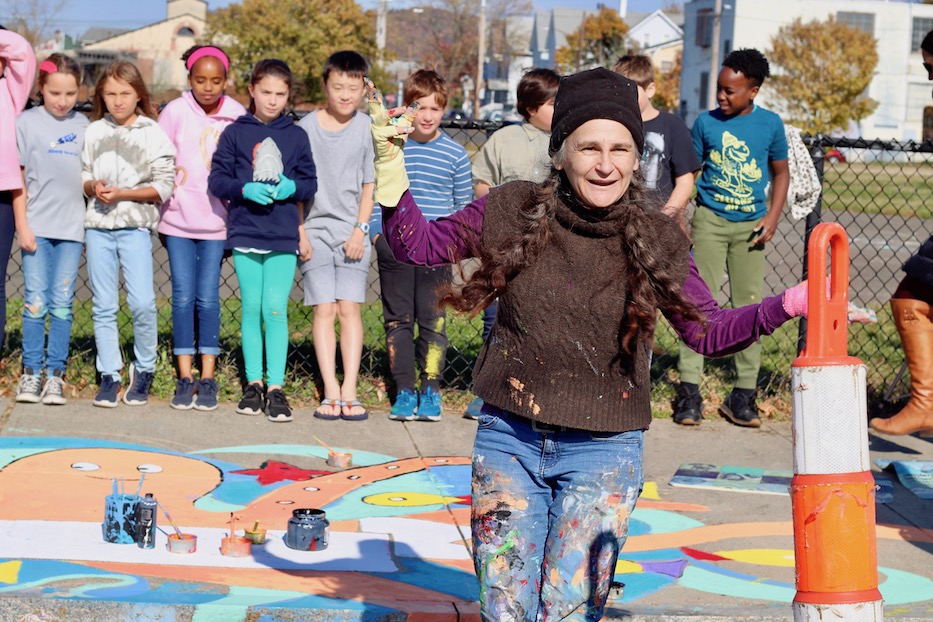 While the mural is meant to be a teaching tool for students, representatives of Save the Sound and Lots of Fish Director Joann Moran said they are also hoping that it will serve as a cautionary, if also colorful, reminder to take care of the neighborhood and the city. Just a few blocks away from the newly finished mural on Exchange Street, Save The Sound is working to turn a section of pavement into a green space that is part of the Mill River Trail. Recently, the organization scored a grant with REI that will also allow new signage for the Mill River Trail.

Meanwhile, they’re trying to fight back against pollution. As New Haven faces increased flooding and high winds, litter gets swept into storm drains, sometimes carried miles by rainwater. Any detritus that makes it into storm drains washes right into the Long Island Sound. To complicate matters, Davis explained, New Haven has a combined sewer system—meaning that raw sewage may join litter and microplastics in the state’s waterways when the sewer system is beyond capacity.

This year, the most insidious culprit has been cigarette butts, of which Save the Sound members picked up 30,118 on 74 neighborhood clean-ups between August and October (butts also ranked globally as the world’s most littered item this year). Anthony Allen, ecological communications specialist for Connecticut Fund for the Environment and Save the Sound, said that they’re deceptively harmful: they’re both incredibly toxic and made of plastic, which means they degrade into microplastics while poisoning the water around them.

He and Davis have also found that 50-milliliter “nip” bottles, the miniature plastic bottles that contain alcohol, fluids from cars, bottle caps, straws, and motor oil that gets illegally dumped are major pollutants that get swept into storm drains.

“There’s a big opportunity for education,” she said.

To that end, Moran said, the storm drain murals are part of a proposed curriculum she is hoping to implement with the City of New Haven in the coming academic year. Working with City Engineer Giovanni Zinn, she has begun to dig into a framework that blends environmental education with public art, multimedia assemblies and project maintenance. She is currently working with local musicians Frank Panzarella and Party Kidd.

In addition to collaborating with public schools across the city, she said she plans to show teachers how to maintain murals and painted rain barrels, so that the projects have a way of continuing from year to year. The Wolcott Street mural is entirely latex paint, meaning it should last for a few years.

On Wednesday, Party Kidd flexed those musical muscles, working on the lyrics to a piece about storm drains as she watched students paint. Born and raised in New Haven—she met Moran while freestyling on a boat last summer—she called the project “what the community needs” for people to learn about climate change in a way that isn’t preachy or defensive.