In a corner of the Phoenix Press Farm, Celin Garcia stood behind a red-and-white checkered table. The table was filled with sugary soft drinks, fresh juices, and pickled vegetables. Three women, all participants of the Farm-Based Wellness Program at Gather New Haven, sat in front of her, watching her every move.

Gather New Haven is the relatively new hybrid of New Haven Farms and the New Haven Land Trust, which came together in January of this year and recently hired Executive Director Brent Peterkin. As part of its long-running Wellness Program, Garcia runs biweekly cooking demonstrations on the farm using fresh, harvested produce.

The Farm-Based Wellness Program is a partnership between Gather New Haven and health centers in New Haven. Healthcare providers typically refer low-income, adult patients with diet-related or chronic disease risk factors to the program. Through a two-hour weekly session, participants learn about nutrition, exercise, and gardening.

The sessions typically have between 20 or 30 participants each, but COVID-19 has reduced the number of in-person participants to just a handful. It’s just one of the ways the nonprofit has made a hard pivot in the face of a global pandemic and rising food insecurity.

Earlier this year, restrictions on in-person participation forced Gather New Haven to recalibrate its outreach efforts across the board. As a result, most of the in-person programming has been moved online and optional hybrid models are being rolled out. The Wellness Program’s cooking demonstrations are available on YouTube in both Spanish and English. 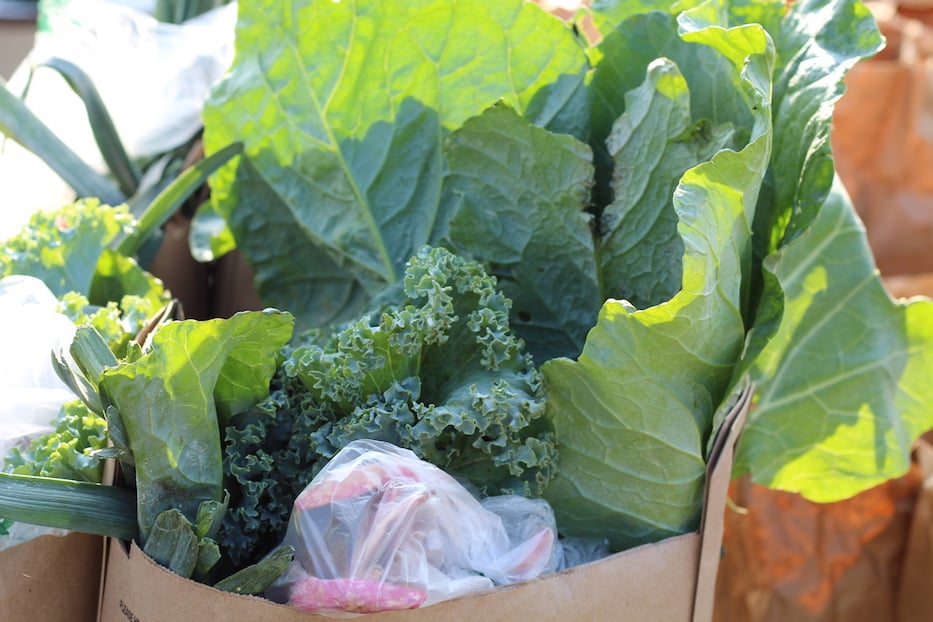 This past summer, the program became a lifeline for many participants, explained Genesis Vicente, the program manager for both the Wellness Program and Community Health Ambassador Program. In March, Vicente met with Community Health Ambassadors (CHAs) to brainstorm new programming and get a pulse on the community, anticipating the effects of COVID-19.

“We found the underlying priority in our community was food insecurity,” she said. “At the time we didn’t have our harvest, so we couldn’t give them anything.”

Vicente has leaned into the transition, viewing it as an opportunity to reassess programming and outreach efforts. She is working on making the program more accessible to members who do not have internet access or are not referred to the program by healthcare providers.

“Perhaps there is something we learn this year that we can implement in future years,” she said. “We can plan for the future.”

Across the garden on a recent weekday, a team of people packed more than 30 care packages filled with a medley of fresh produce from the garden and nonperishables. Each package has a list of ingredients and educational material about all of the produce found inside.

Juanito Ortiz and Marina Morocho, both CHAs, will deliver the packages across the city to Wellness Program participants who cannot attend the program in person.

“I knew I needed to change my diet drastically or else,” he said.

Food relief efforts became the program’s primary focus in the early stages of COVID-19. The program developed bilingual flyers, called individual members on a weekly basis, and reached out to the more than 300 person Wellness Program alumni. 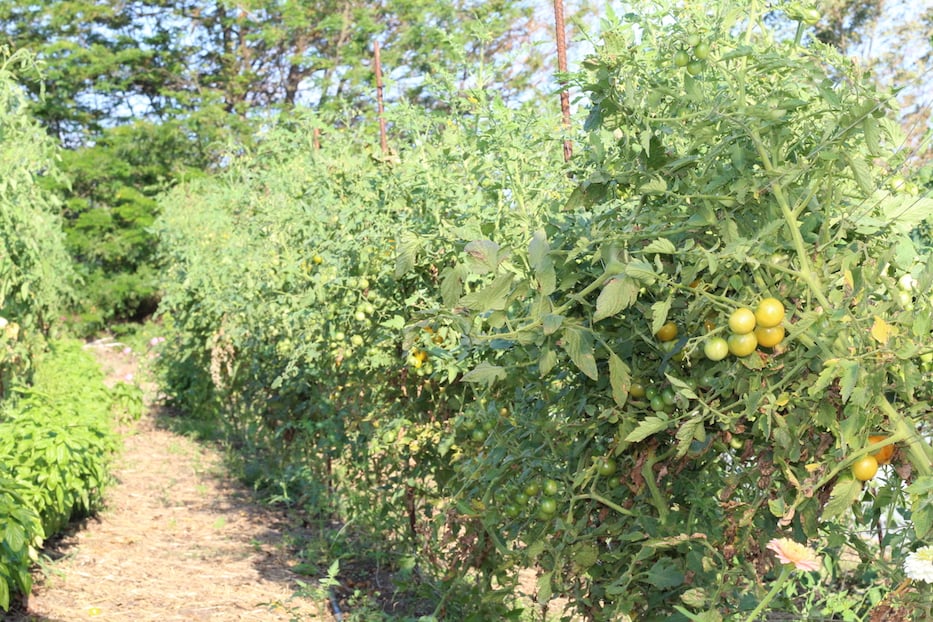 Vicente and others redirected community members to local mutual aid groups, like New Haven Area Mutual Aid and Mutual Aid CT. However, Vicente acknowledged that food insecurity was an issue in the community prior to COVID-19 and was only further exacerbated by it. Last year, Data Haven reported that 22 percent of the city’s residents were food insecure—a number that was higher in Black and Latinx communities.

“We cannot eradicate food insecurity alone,” she said. “We try to alleviate this burden so they don’t have to worry about buying groceries that week.”

Now that the garden is in full swing, the program provides food from the farm to 63 households on a weekly basis and more if they are able to. The Wellness Program has also partnered with Haven's Harvest to provide dry goods and other rescued goods.

Beyond food relief efforts, the program found itself facing a number of questions related to unemployment, housing authorities, and rent moratoriums. Many of the members have limited-English language skills and primarily speak Spanish, so they rely heavily on the program’s network for assistance.

Ruth Torres, the Community Health Ambassador Coordinator, found herself at the center of these requests.

“People called me all the time,” she said. “People just didn’t know where the resources were.”

Torres herself helped multiple people file for mutual aid assistance and unemployment benefits. Vicente emphasized how people still need aid even months after the initial wave of relief in the spring.

“One month people are stable and don’t need help,” she said. “The next they’ve lost it all.”

As a result, the program is intentional in calling members of the community on a weekly basis through the CHAs.

At the same time, community gardens across the city saw an influx of people. Community Garden Manager Eliza Caldwell attributed the increased participation to people being laid off from work or having reduced hours. She is also developing an online “Gardening 101” series and virtual garden tours.

Mary Ann Moran, the Fair Haven District Coordinator, witnessed the increase firsthand. Gardens that traditionally had empty beds reached capacity within weeks. In response to the demand, Gather limited the number of visitors in the gardens, and made masks mandatory even for outdoor use. However, the same concerns around food security were voiced by the new participants.

“They were panicking about where they were going to get food,” Moran said. “We were able to add two or three people here and there but the beds ran out.”

Food insecurity became more of a pressing issue with the closure of the school and some library gardens. Similar to the Phoenix Press Garden, these gardens are communal rather than individual. The Barnard school garden remains open.

The communal garden next to the Fair Haven branch of the New Haven Free Public Library (NHFPL) was forced to close due to outside interference. The library garden had been a fixture in the community since its inception nine years ago, explained Moran. Informally, it was also a source of food security for community members.

The garden also had a partnership with the Mary Wade Home, scheduling tours for senior citizens, but the program has been put on hold. Other gardens with similar programs have also put their programs on hold out of concern for the older population.

As a result of the closure, the Fair Haven Library garden resources have been reallocated to the Gather New Haven community garden on Clinton Avenue. The library garden will reopen after soil tests are completed.

Despite Gather New Haven staff and volunteers taking precautions, some Black and Latinx community members in lower-income neighborhoods have still been skeptical about returning to the garden out of fear.

“People are afraid to come out,” said Torres. “They think about the family and won’t take any risk that could put them in danger.”

The concern is warranted: Black and Latinx communities have been disproportionately impacted by COVID-19. Moran said that in the Fair Haven area, many families are intergeneration with older members or are households in which grandparents are the sole guardians for young children.

Torres added the garden is one of the few spots she can go and have a reprieve from the outside chaos especially with COVID-19.

“We all have problems,” she added. “When you go there and are outside. You rewind time. It is an opportunity to connect with nature and find peace.”

As the summer winds down, the organization is brainstorming what to do during the fall and winter seasons, when food scarcity will increase. Moran believes gardening, which typically decreases heavily in the fall and winter, will continue in large numbers through the fall and winter. Instead of simply increasing the number of gardens, Caldwell believes it is crucial to focus on the existing gardens.

“People have reached out asking for more gardens,” she said. “But right now we have to focus on getting resources to the ones in operation.”

In the future, Gather New Haven is aiming to add more beds and gardens in the Dixwell, Newhallville, and Fair Haven neighborhoods.

Find out more about Gather New Haven at its website.