Creative "Exchange" Brings The Art Outside 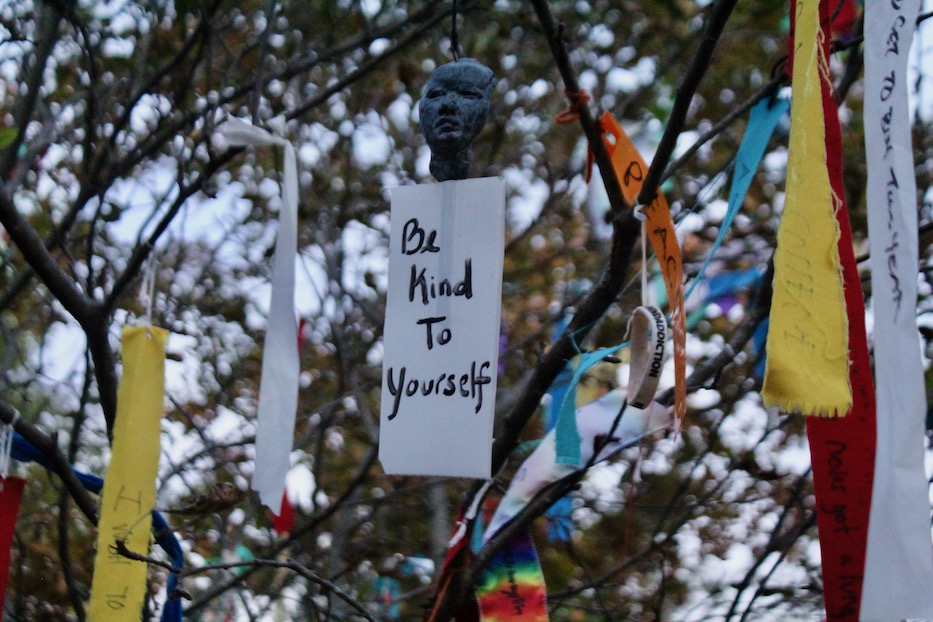 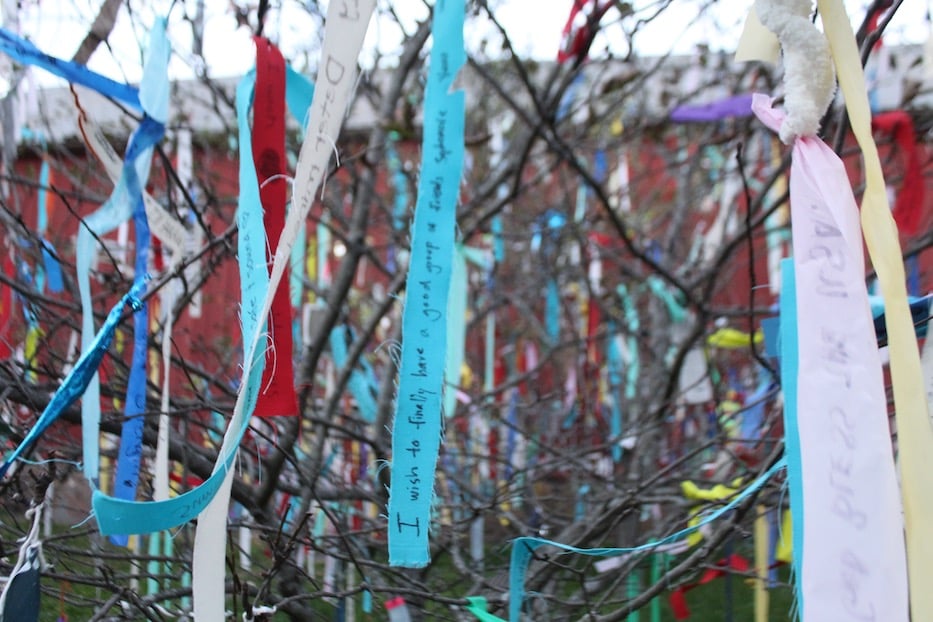 The strips of fabric swayed in an early fall wind, bright against the pink-gold of dusk. I wish to finally have a good group of friends this school year, read one wish. Joy & Safety for My Children, read another. That my cancer will never come back, willed a third from a length of pink cotton.

A chill passed though the space; sunlight scattered on a footpath just a few steps away. The growl of a dirt bike in the near distance joined the evening lullaby.

Welcome to a stop on The Exchange, a statewide art treasure hunt from artist-curators Howard El-Yasin and Suzan Shutan and 24 participating artists across Connecticut. After launching on Aug. 15, the project runs through Nov. 1 of this year. Certain sites will be part of Artspace New Haven's Open Source Festival this month; all of them invite viewers to spend time with the work.

It is explicitly not a gallery space: artwork spans nature trails, front and back yards, garages, and office parks. Almost always, it spurs a dialogue with the very fact of its existence.

"We came together because we really wanted to create relationships for others, relationships that had a sense of creativity, innovation, humanity, empathy," Shutan said. "These were all issues that were important to us. Consideration of others. And [we wanted] to indirectly educate the public about art."

The show has been a long time coming, said El-Yasin in a Zoom conversation last month. He and Shutan met three decades ago, when he was still working for the Yale University Art Gallery. They remained in touch as both grew as artists, sometimes ending up in each other's shows. For years, they have been interested in working with each other as curators. While both are exhibiting artists themselves, both are interested in art "that falls outside of the normal gallery situation," El-Yasin said.

This year, the timing finally seemed right. After dreaming up the project together, the two applied for support from the Connecticut Office of Economic Development, then put out a call for artists when the funding came through. The two found that some artists were excited to work in teams or pairs; others preferred to install their work alone. The name—that Shutan and El-Yasin were doing something, and just couldn't classify it—grew out of that idea.

The rules were fairly open-ended, they added: the artwork had to be original, it needed to be accessible, and it was supposed to fit into a broad theme of "exchange." Shutan said that they also cautioned artists that private spaces—yards and garages, for instance—might be logistically easier. Of dozens of artists who applied via the platform Slideroom, 24 of them made the cut. There are 15 projects among them. 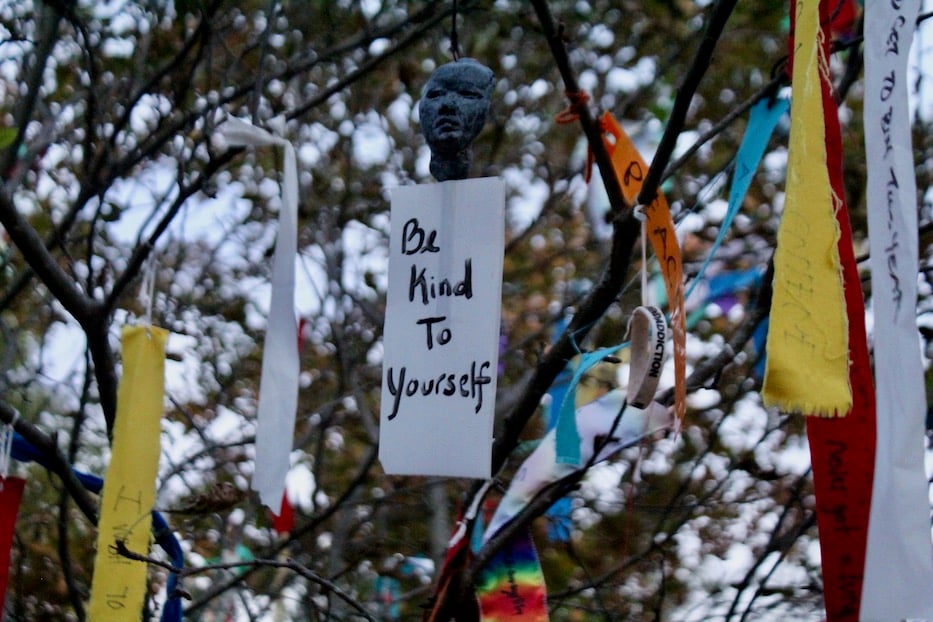 "We were trying to do something that was somewhat counter gallery scene [or] structure," El-Yasin said. "We thought it would be an exciting and fun way to get people engaged, because they wouldn't have to go to a gallery. They're going to someone's backyard, or someone's garage, or someone's front stoop, or the woods—there are so many places that artists are taking you."

"There's something really magical about finding something," he added. "You know, searching and then finding it … We wanted the [act of] venturing to be more like a destination."

Those projects, which now sit on a map and fold in video, QR codes, and interactive activities, now span the state, with particular art clusters in New Haven and Fairfield. They range from front lawn puppetry and pop-up garage installations to deep, reflective art prompts and references to Connecticut's role in hosting the first telephone exchange.

At the Eli Whitney Barn on a recent Monday evening, that exchange between artists, viewer-participants, and passers-by was fully on display. Beside the barn's red and white wood paneling, hundreds of fabric strips hung from the branches of a tall tree, animated as an evening wind picked up beneath them. Together, they make up The Wishing Tree, a project from Susan Clinard that has become a collection of prayers. 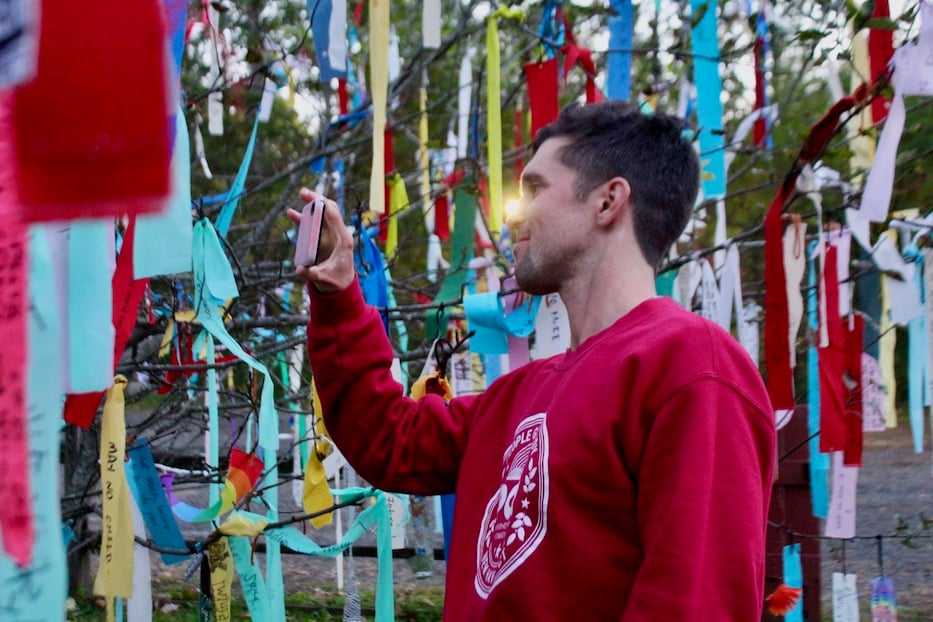 Inspired by the children's book of the same name, the installation took shape earlier this year, after Clinard heard about The Exchange and "thought this was kind of the perfect opportunity," she said. She's had the project in mind since the beginning of the pandemic: this was her chance to do it. As she built it out, she worked with third to eighth grade students at Worthington Hooker School on an initial round of wishes.

"They just dove in," she remembered. "I couldn't believe how deeply thoughtful their little voices were. Everyone had something to say, and it was so precious."

Since then, it's taken off. Some of the entries are heartbreaking: prayers for the safety of children and elders that remind viewers of how cruel and violent the world can sometimes be. Others wish for a world where corporations and governments take climate change more seriously. Mostly, it feels like a convening of souls, brought together over space and time.

After November, Clinard said that she plans to keep the wishes, and integrate them into one of her vessel sculptures. She praised Shutan and El-Yasin for creating a conversation that will continue well past the exhibition's physical end.

"It was really a clever idea to begin with," she said. "It seems like it kind of gets people out of their comfort zones and out of their different neighborhoods." 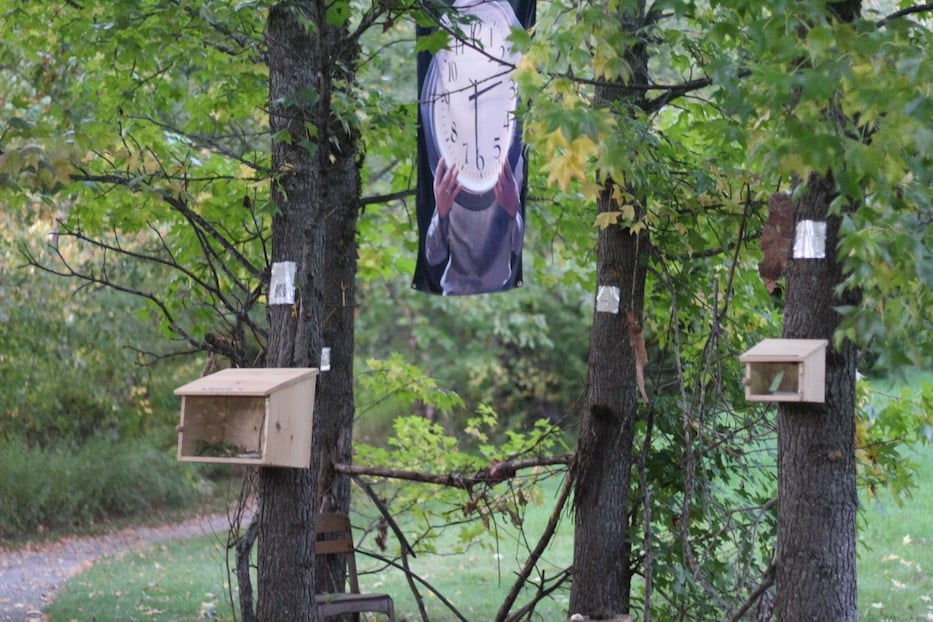 Clinard's work—which is also now the community's work—isn't alone at the barn. Down the path, an installation from artists Joy Bush and Judith Kruger also asks a viewer to come in close, and let the heaviness of this world melt away if even for a moment. In their joint work 2 Artists Walking / A Place In Time, they have created an intimate, contemplative space that is completely reliant on nature.

Between two trees, an image of a giant clock emerges, held by two slender hands at its base. A torso looms behind them, its identity obscured by the clock face. Close by, two wooden boxes—they first appear as bird feeders, but are in fact for human use—are filled with a layer of leaves, pine needles, grains of dirt. A note from the artists encourages them to leave a natural object from their own walk—making them a collaborator on the installation. Installed beside them, a book with a pen asks people to add their reflections.

If a viewer walks further into the area beside the Whitney Water Center—which is now ablaze with fall oranges and reds—they will travel around a small lake and up a path to Jennifer Davies and Meg Bloom's Forever Now. From the walkway, rows of orange and pink bands draw a viewer close, stretched taut across the wide mouth of an old pipe. These, it turns out, are Kozo fiber nets, thick and milky white as the sacs webworm are known for further south.

In an accompanying label, the artists explain that the fiber nets are biodegradable—while the accompanying plastic nets are not. "Through the action of water and other natural elements, the kozo fiber will break down to enrich the soil, but not the plastic, which will remain 'forever now' as an environmental pollutant," they write.

The trail snakes like this across the state, with surprises from Meriden to Washington and Darien. Going forward, El-Yasin and Shutan both said they would like to expand The Exchange across not only the state, but across the country. Already, they are planning to repeat the project, although they do not yet have a date in mind. Shutan said that one of the best parts of the project is hearing from artists "that we've never met before," which feels very meta on a project dedicated to connection.

The two are growing that collaborative footprint this fall as well. In September and again in October, they joined The Ely Center of Contemporary Art's (ECoCA) exhibition Full House and street-wide Block Party. They are also curating "Hello Neighbor," the Westville-centered weekend of Open Source at BLOOM and Lotta Studio later this month. When the first phase of The Exchange ends in November, they plan to use their website as a landing page and archive, so that the work lives on.

"It's been a lot of work, but it's been a labor of love," El-Yasin said. "I think what Suzan and I have managed to do, it's exciting for us because it offers potential for lots of organizations that already have a space but want to bring in curators who offer a vision that may be different from what they're normally used to."

"It is really wonderful as an artist to also curate," he added. "There's a different value set in that process. There's a learning value to it. We're building our skills, learning from each other, as well as the artists we work with."

Learn more about The Exchange here. A map to all 15 projects is above.