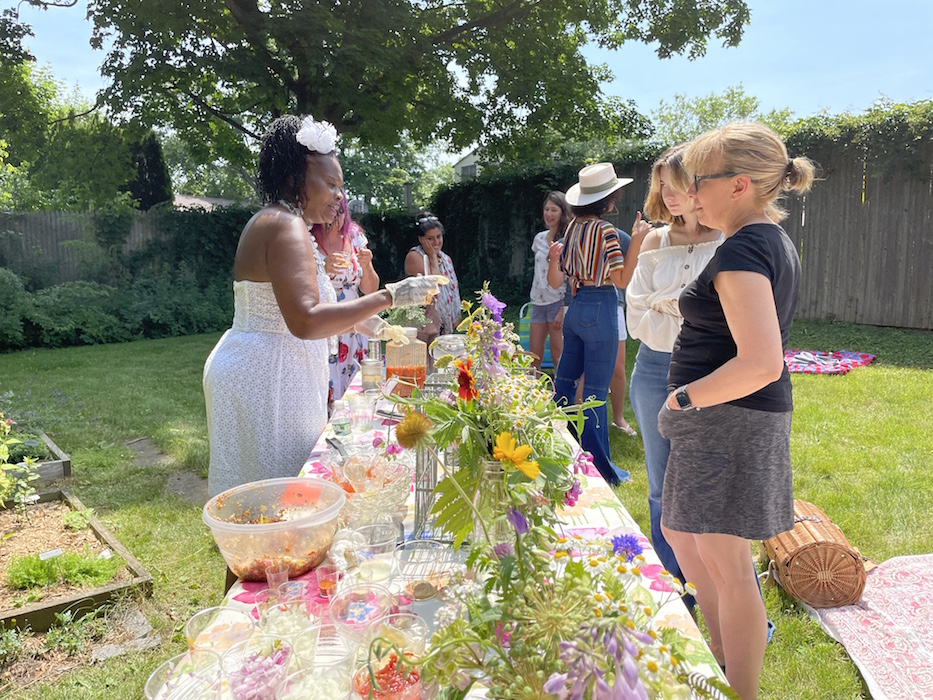 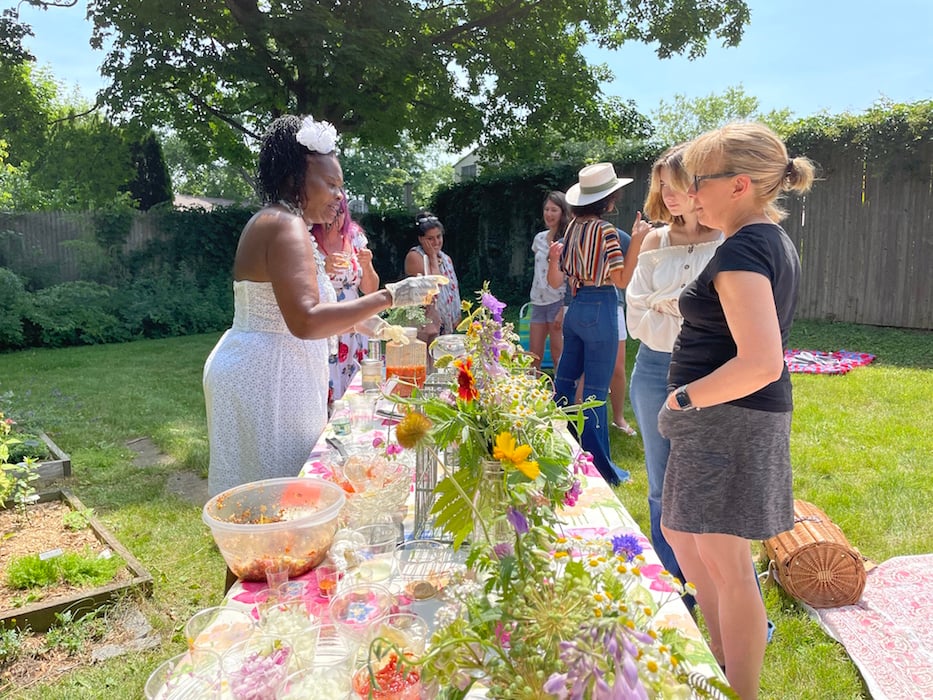 In the backyard of the Pardee-Morris House, Nadine Nelson filled a pitcher with vibrant red tomato juice, neat chunks of cucumber and red onion, and plenty of lovage leaves from the herb garden behind her. She was going to be using a Caribbean spice mix, she explained to her audience. Some of them sat on the lawn in front of her; others watched online through a livestream.

“But if you don’t have it, just use what you have!” She laughed and gave the pitcher of gazpacho a vigorous shake before holding it up, audience members and chef alike admiring the swirling mix of color and vegetables.

Last Sunday, gazpacho was just one of many dishes showcased at "An Afternoon of Culinary Herbs, Cottagecore, and More," a culinary workshop presented by the New Haven Museum at the historic Pardee-Morris House. The workshop kicked off a series of four events centered around the New Haven Museum Herb Garden. All are hosted by Giulia Gambale, who tends the colonial herb garden on the grounds. 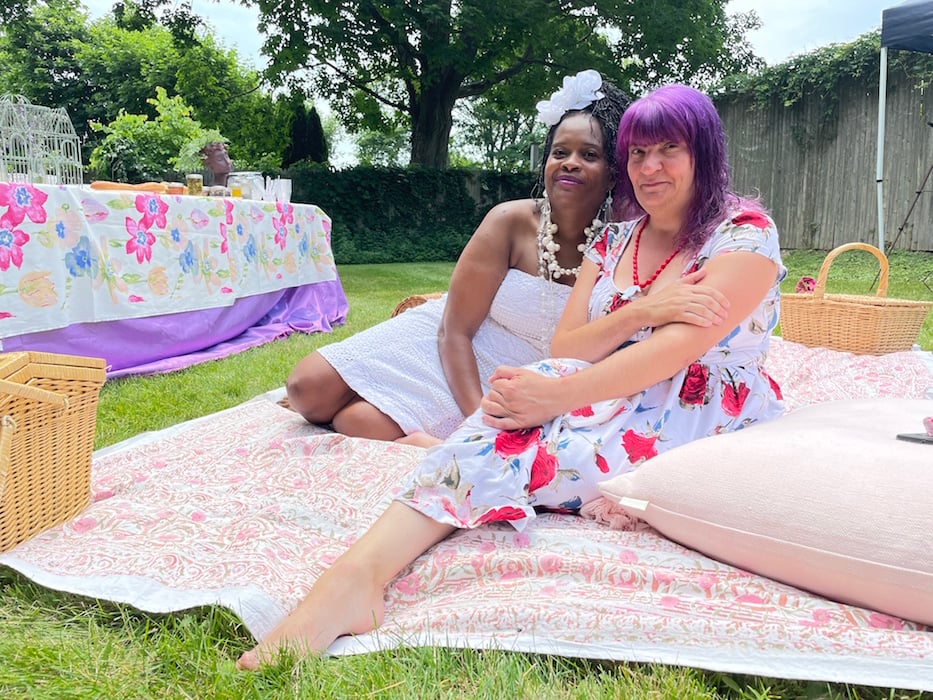 Gambale introduced the various herbs grown there as Nelson, chef and Creative-in-Residence at the New Haven Free Public Library, incorporated the herbs into a delectable picnic spread. Members of the public were invited to bring their own picnic spreads and join them in a cottage-core-themed epicurean experience of the past.

As guests made their way to the back lawns of the Pardee-Morris house, they were greeted by a varied spread of cubed vegetables, earthy spices, and dark blueberry trifle in intricate cut-glass jars on a bold floral tablecloth. Slender arrangements of yellow, white, and purple flowers towered over the ingredients in tall glass vases. Nelson and Gambale greeted each of the guests warmly as they spread their blankets in the shaded grass.

Gambale took the stage first to explain the historical significance of the herb garden, composed of four garden beds in a square filled with carefully labeled plants. During the colonial period, a similar garden would have been cultivated close to the kitchen to provide fresh herbs for the day’s meal.

She plucked several small sprigs from the garden, naming each herb and giving examples of its uses, both past and present. Feverfew, with dainty daisy-like white blossoms, remedied migraines and warded off insects. Chive flowers added aroma to meatloaf or burgers. 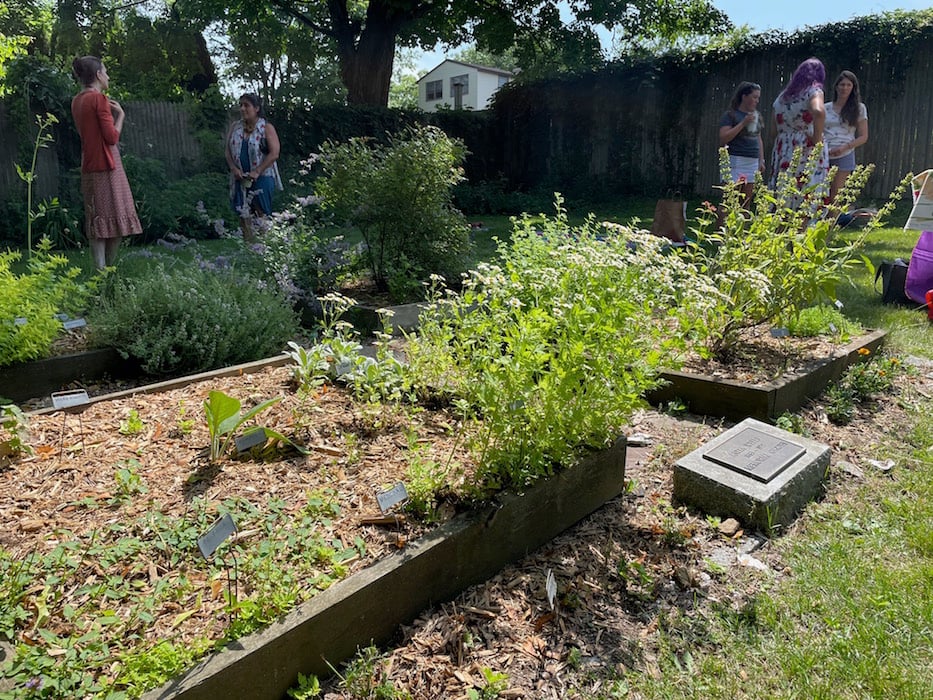 “My very favorite is lovage,” Gambale announced, holding up a stalk of jagged edge leaves. “Lovage makes celery taste even more bland than it already is.” She handed each guest a stem. It smelled strong and pungent, like she had said, somehow more celery than celery itself. Another round of herb tasting earned appreciative exclamations from the audience.

Nelson stepped up to begin the cooking demonstration, framed by white flowers in her hair and the bouquets on the table. Her inspiration for making a picnic spread came from her childhood in New Haven, when her family used to pack a picnic and go out to a park to spend time together every Sunday. As an artist, she said, her practice also involved social engagement and relating well to nature. A picnic is the perfect way to combine the two.

Nelson prepared a menu of toss-together salads, easy sandwiches, and cold drinks perfect for the sweltering summer day, using herbs from the garden behind her. First, she mixed a mango basil-seed spritzer, which turned out to be easier to make than it sounded. A little mango puree, a few spoonfuls of translucent jelly-like seeds, and a dash of sparkling water turned into a refreshing drink.

“I specialize in those things,” Nelson joked. “Kinda fancy but very easy.” 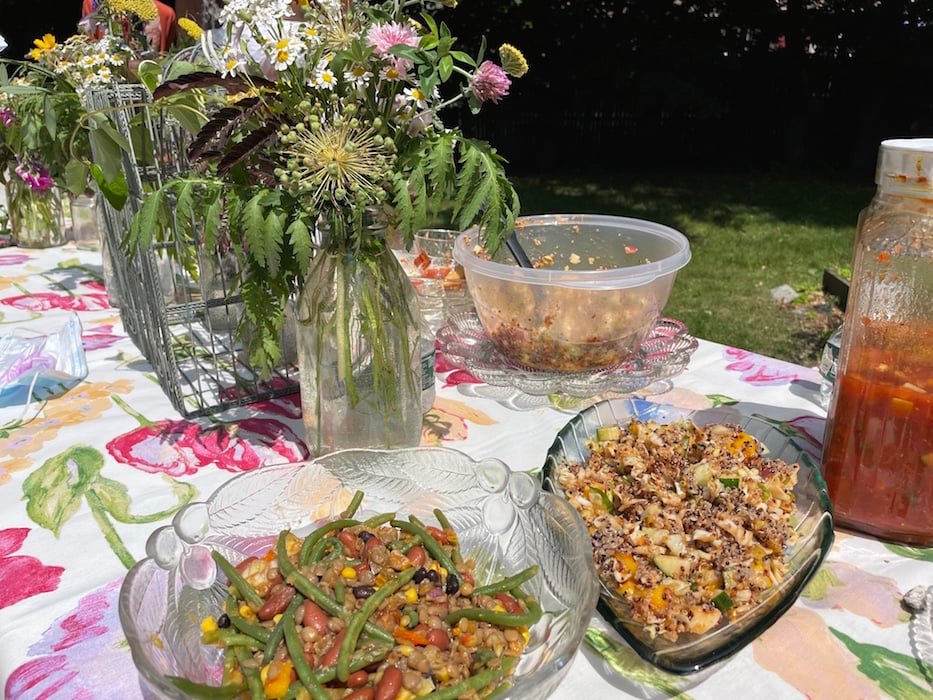 Next up, salads, including her signature quinoa salad with mango and kimchi. Nelson held up each ingredient before tossing it into a large bowl, layering colors, textures, and flavors into one giant dish. While this particular salad was Asian-inspired, she suggested changing the dressing or certain ingredients to skew it towards one cuisine or another. Above all, she emphasized flexibility. “I’m a freestyle cook,” she said. “I believe in showing people how to do things in a way where you can use things in your kitchen and can always adapt.”

One three-bean salad and a stuffed Italian chicken sandwich later, and her picnic feast lay ready as the audience leaned forward in eager anticipation. Each dish took inspiration from a different part of the world - Mexican, Asian, Italian - bringing together a blend of cuisines. Nelson said she loves visiting ethnic food stores and cooking international flavors, just as she encourages others to do through her business, Global Local Gourmet. In this demonstration, she hoped that seeing her cooking would make the recipes seem accessible and easy to imitate at home.

As the shade shifted across the lawn, Nelson began serving samples from her spread of food. Guests and hosts alike leaned over the table to share food and enjoy each other's company. A photo booth captured candid moments to remember as people lounged together on the grass.

In the sun, the quinoa salad seemed almost to glisten with dressing, highlighting the yellow mangoes and pale fennel. Sour, sweet, and crunchy, it tasted even better than it looked.

To learn more about events at the Pardee-Morris House, visit the New Haven Museum's website.