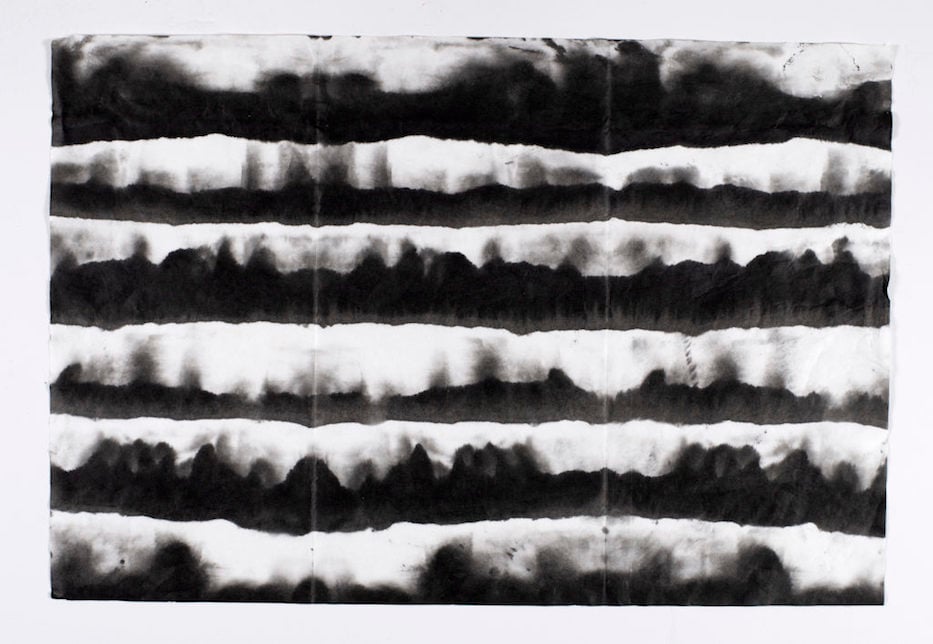 A large bloom of Sumi ink spreads outward from the center. Its edges are both jagged and soft, evidence of the paper’s relative dryness as it encountered the ink. The rest of the surface is covered in ink spots of different sizes, yet the artist’s hand cannot be detected. It's abstract but reads as a network of fuzzy microbes or an aerial view of a landscape. This mysterious and murky scene lures viewers closer.

This work, one of many in Fritz Horstman’s Folds and Ink drawing series, is now on view at New Haven’s Institute Library as part of A Blue Dark. The exhibition, which runs through Sept. 7, presents the collaborative efforts of Connecticut-based artist Horstman and Fiona Sze-Lorrain, a poet, translator, and zheng harpist who resides in Paris.

The project began in 2017 when Sze-Lorrain was in residence at the Josef and Anni Albers Foundation in Bethany, where Horstman has overseen the educational and artist residency programming since 2004.

Together, the works on display offer viewers “textual/non-textual responses to the presence of a luminous dark.” In other words, Horstman and Sze-Lorrain interpret the idea of darkness through abstract imagery and poetry. As the description implies, the works are tonal, focusing on the infinite range of between pure white and absolute black.

Inside The Gallery Upstairs—the official name of the building’s third-floor space—medium-sized ink works are mounted on the walls, with an additional three large standing cases containing more from the series. Some include text, while others do not. All the wall works are framed, but the absence of a glass shield allows viewers to inspect the surfaces of the absorbent paper without any barrier or glare. Sze-Lorrain’s poems, which are handwritten in many works, and Horstman’s bare ink paintings heighten an intimate feeling within the show.

Many of the works seem to follow a similar process. While he was working on the pieces, Horstman prepared washi paper, a traditional type of Japanese paper often made from wood pulp, by splashing or soaking the surface with inks of varying values, from the faintest pewter to velvety ebony. Several appear to have been folded first, like an accordion, the ink gathering into the horizontal or vertical crevasses.

Spreading into abstract shapes, these dark pools sometimes evoke the landscape—mountain peaks and glaciers emerging from murky vistas. At other times, the patterns recall those found in Ikat textiles with intricate and cosmic reverberations. For the selection of works that combine text and imagery, Sze-Lorrain presumably added excerpts of her poetry after Horstman’s ink had dried. Her words coincide with the natural breaks within the compositions. Though her penmanship is nearly illegible on occasion, the poems are never washed away by one of Horstman’s inky masses.

What varies across the ink paintings (all of which are untitled) is Horstman’s application—slow and confident, at turns, and spontaneous and intuitive in other instances. Small spots of ink blur into the wet surface of the paper by quick flicks of the wrist. Employing these varieties of speed invites the element of chance into the compositions. Horstman’s washes feel infused with a Taoist spirit, responding to and embracing the nature of change as an artistic device. This affinity for the ephemeral also ties into the theme of their project—the fleeting occurrence of a stark darkness. Within our homes and cities, light emitted from our electronics or cars interrupts the truest black.

Sze-Lorrain’s poems echo this fascination with the absolute by choosing imagery that fixates on the extremities of human experiences. These poems are not about life’s more mundane moments; she dwells on life’s lower valleys. In the lower left corner under a spray of ink written in Sze-Lorrain’s compact handwriting, a viewer reads: “In this life, suffering is nothing. / I’ll grant you a wish, / hungry ghosts — / statues that knock at my stone gate.”

In another poem titled “After the Moon,” Sze-Lorrain scrawls: “Scooping up handfuls of fresh / silence from a mirror of oblivion, / I gather from the well / that night disguises his guests. / It pleases him that wind / must wait. Even rain. Misled / the tempered dark takes a false / step. So many shadows. / So few ghosts — I was lonely / but curious / in this imperfect end.”

Oblivion, loneliness, suffering—Sze-Lorrain gravitates toward the gloomier parts of any life.

In A Blue Dark, ghosts populate Sze-Lorrain’s poems and weave through the shadowy worlds that Horstman has built. The exhibition title alludes to the perceived temperature of darkness. It’s cold like the inside of a cave, one of the few—or perhaps, the only—places on earth where a true absence of light can be observed. A total blackout of light, both its optical and spiritual embodiments, is rare. Through poetry, ink wash paintings, and the works where they co-exist, Sze-Lorrain and Horstman dwell on this phenomenon as an alluring and dangerous entity.

A Blue Dark: Ink Drawings by Fritz Horstman. Poetry and Translations by Fiona Sze-Lorrain runs at the The Institute Library, 847 Chapel St., New Haven, from June 1-Sept. 7, 2019. The accompanying catalog, published by Vif Éditions, can be previewed inside the exhibition. For more information visit the Institute Library’s website.