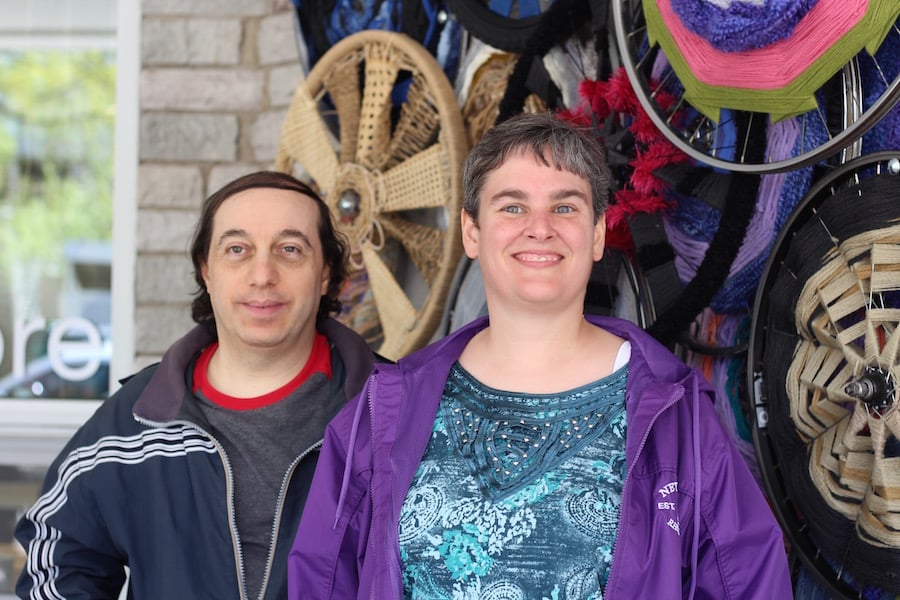 Joseph traded his sketchbook for a length of multicolored yarn. Ellen swapped out her paintbrush for a discarded bicycle wheel. Now, they’ve lent a whole new meaning to the art of re-“cycling”—and are teaching community collaboration in the process. 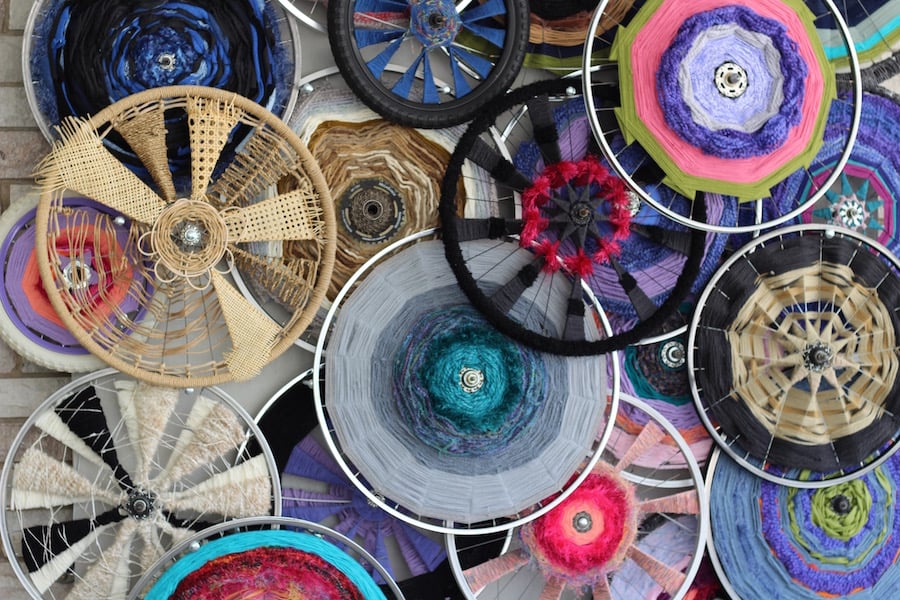 The project began last September, when East Street Arts scored a matching grant for $4,000 from the Connecticut Office of the Arts for a fiscal year 2019 project. For the nonprofit, which employs local artisans with developmental and physical disabilities as an arm of Marrakech, Inc., it was a way to create a new paid art opportunity for its artisans, while also inviting the community into the space.

Once the funding had been matched, East Street’s artists were each compensated for their work on the sculpture. The project itself took over five months to complete, with more wheels at the ready if pieces that are up need to be taken down or swapped out.

“We say all abilities,” said Eric Ginnish, director of creative development for the organization. “The main goal is getting these artists some sort of income, and it was great seeing them work on the weaving.”

Over a series of weekly arts classes and monthly community sessions, 18 East Street artisans and 19 community members jumped onboard to complete the sculpture, which involved weaving colorful yarn (and occasionally, chair caning material) through the spokes and frames of discarded bicycle wheels. Mary Schiffer, arts educator and design coordinator for the organization, described the result as “months in the making.” 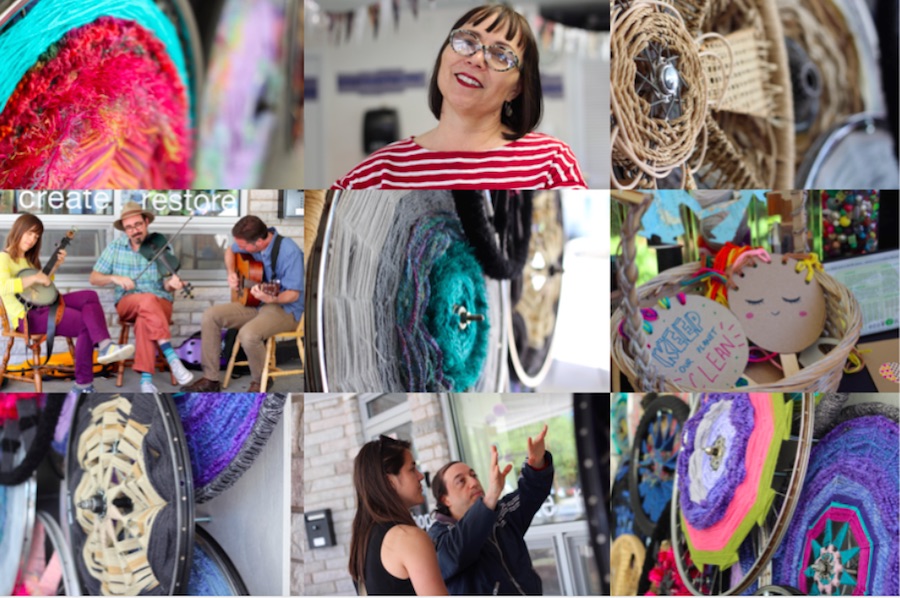 “Everybody is so glad to be here,” she said, stopping mid-thought to offer hugs to artists who trickled in and found her during Saturday's celebration. As the organization enters its third year of creating work in East Rock, she said she is especially excited to offer “a totally new concept” to artists who may be accustomed to the organization’s offerings, which also include painting, sketching, wood-block printing, jewelry making and chair caning.

Now the overlapping wheels sit outside, beckoning to passers-by with a spray of bright colors and textures. On one wheel, tight navy blue yarn yanks the viewer in, delighting the eye as it pans out to splashes of sky blue, turquoise and aquamarine. On another, a fuzzy rainbow of color winks out, soft and light to the touch. On yet another, it's a surprise to find wood, rattan and raffia woven into a tan-colored tire.

Studying her handiwork Saturday, Ellen said she was excited to weave for the first time a few months ago, and intends to do more fiber arts as she continues her work. Earlier this year, she put aside her daily paintbrushes for soft blue wool and a lone bicycle wheel with a fat, white tire still attached. 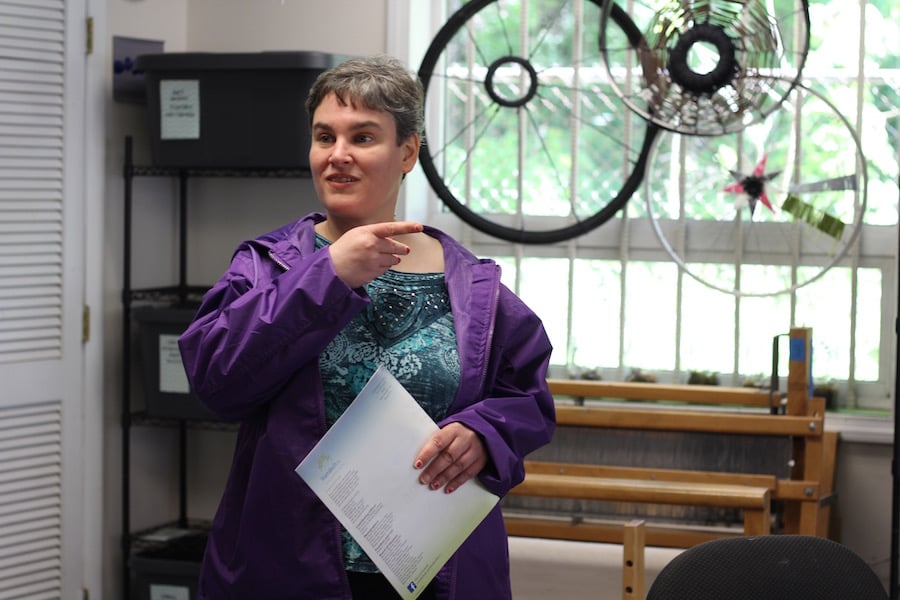 Joseph, whose drawings of chairs and boats have been reproduced on the organization’s mugs, tea towels and t-shirts, said that he also hopes to expand his fiber arts repertoire after joining the project in April. Saturday, he pointed out his handiwork to attendees including Collab Co-Founder Caroline Smith, who studied the pieces intently as bluegrass played on in the background.

During the install, Ginnish said that the sculpture doubles as an ode to recycling. Each month, East Street Arts gets large amounts of donated yarn—usually from New Haveners who intend to become knitters, then burn out on the craft. The organization also has a relationship with EcoWorks CT, which has taken its mission of creative reuse to North Haven after several years on State Street. 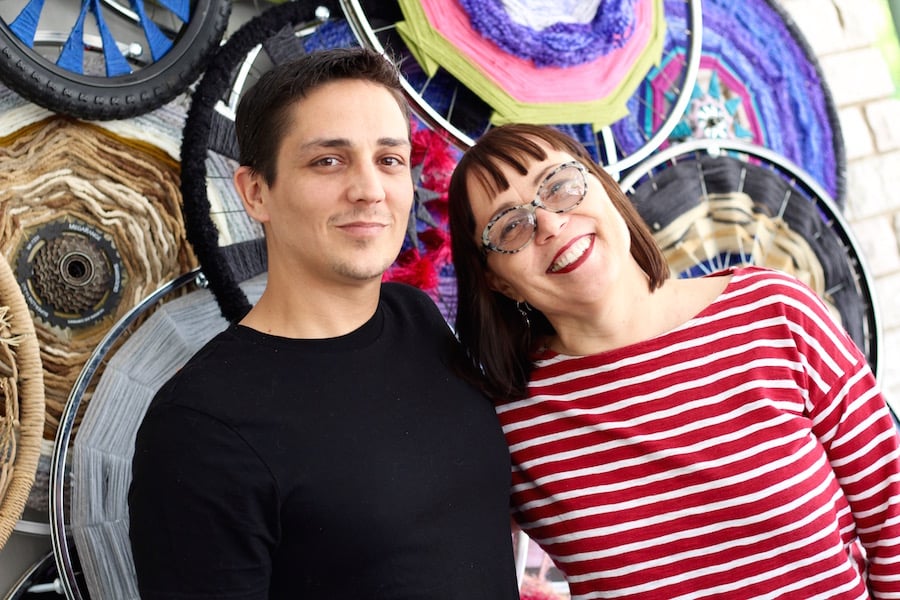 During the project, both the Bradley Street Bicycle Co-Op (BSBC) and The Devil’s Gear Bike Shop donated bicycle wheels, giving East Street Arts enough that the 30 on display can be switched out or replaced with more that are still in-progress. Saturday, BSBC Founder John Martin said that he is grateful to see the Co-Op’s trash turn into another organization’s artwork. As the Co-Op deals with discarded inner tubes and scrap metal each month, he added that he hopes this project will open the door to more recycling opportunities in the community.

East Street Arts is open from 9 a.m. to 6 p.m. Monday through Friday at 597 East St.. For more information, visit the organization’s website.