Teachers Dance Through The Distance 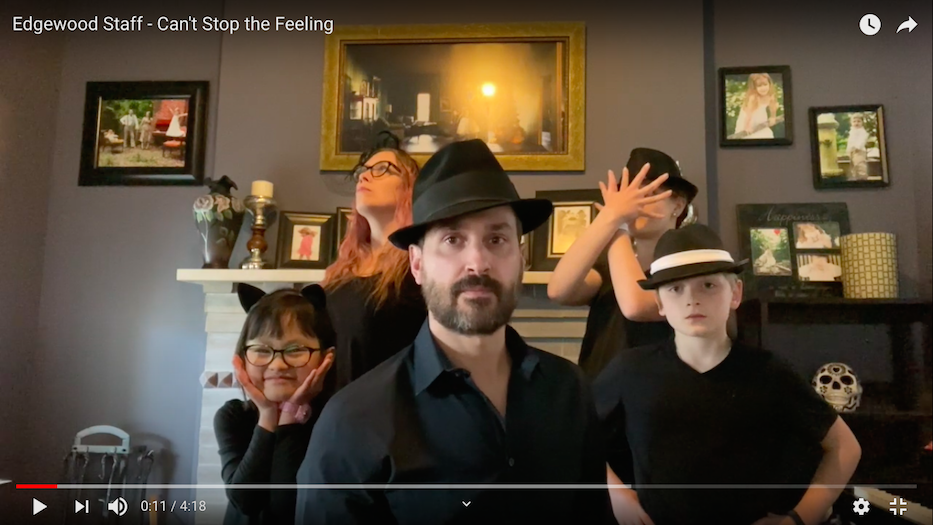 Dr. Nicholas Perrone stands in a living room, his head bobbing as keys and percussion cue him in. Behind him, four family members have transformed into backup dancers, with a mix of black fedoras, cat ears, and flapper-era headgear. Justin Timberlake's vocals soar over them, but it's Perrone who is mouthing the lyrics. He's right on time.

Currently, students and teachers have been out of school for almost 50 days. Over a mix of YouTube, Instagram, and Facebook Live, teachers have released videos that show them singing, dancing, and sharing words of encouragement for the students.

Each school has taken a slightly different approach. At Edgewood, which posted a video Wednesday, Perrone stitched together a video collage of over a dozen teachers lip synching to Timberlake's "Can't Stop The Feeling," many busting moves with their small children.

Teachers pulled out the stops: capes, top hats, at least one copy of Harry Potter and a psychedelic sequence with a ceiling fan all made an appearance.

"Our Edgewood Staff wanted to spread some cheer to you and your families," the school posted on its website Wednesday. "​We miss seeing all of your faces!"

The school has also added near-daily updates to its Instagram account. On Thursday, Perrone started the morning with a a daily precept, speaking to students from his rain-splattered front porch instead of the school. With one arm wrapped around his dog, Violet, he drew on the words of writer and illustrator Austin Kleon, who urges his readers to jump in to their lives feet first .

"I think that for me, that idea is about knowing who you are and understanding who you are, and that each of us evolve over time," he said. "And so, just enjoy the ride. And enjoy learning what things you like and don't like, and things like that. On our quarantine time, we get to spend a lot of time with our family and with our pets, so hopefully you can enjoy that time together."

"Make sure to grow a little more today," he signed off as his youngest daughter, dressed in pink, waved from the window behind him.

At East Rock School, a similar video collage appeared from Principal Sabrina Breland in early April. Instead of coordinating staff around a single song, Breland set the sequence to poppy music as teachers offered messages of encouragement and support. In between frames, bright, still images of student artwork filled the screen.

"I hope all of you are okay, and that your families are safe and healthy," said Assistant Principal Leslie White Depriest in the opening frame. "I really miss seeing all of you, and I can't wait until school is back in session."

Other teachers offered just a few words, or a reminder to stay safe. Some waved; others urged students to make the most of their time at home while still completing their assignments. Tamara Wells, a social worker at the school, appeared in the video with a non-accidental snapchat filter to cheer students up. As she spoke, a dainty black nose and furry pink ears floated around her face.

"I can't wait to see you guys, and if you need anything, definitely reach out," she says.

There have also been near-daily videos at Co-Op, where teachers have performed music (Harriett Alfred's greetings, like the one above, often melt right into song), given cooking lessons, and reminded students to both finish their work and give themselves time to get off their screens.

In one, drama teacher Robert Esposito assembles cheese-studded pasta shells from his kitchen, describing in detail a walk outside that got his dog so excited "he pooped three times."

In another, dance teacher Lindsey Bauer walks students through the steps she took before cutting her hair, curly brown tufts of which now sit close to her scalp. In yet another, posted to Instagram Monday, creative writing teacher Judith Katz reads a poem about insomnia that she has written specifically for the students, who she refers to as "Co-Opians."

She describes the naps she now takes in the wee hours of the morning, so that she can adjust to the sleep schedules of her students as they work remotely. As she speaks into the camera she's curious, but not prying: she asks how many of them have struggled from insomnia as a side effect of quarantine, to which many students have replied in the comments.

The point, my dears, is that you are not sleeping,/And neither am I, reads one excerpt of the poem. I am writing in the night/And you, well you tell me you are strolling outside/Texting/Quietly FaceTiming ...

The videos feel normal and conversational, until they don't. Teachers take a deep breath, and remind students that they're all in it together. Sometimes they belt their way through the pressure, or croon softly as not to get feedback in the mic.

Then they get off social media, and go back to work.