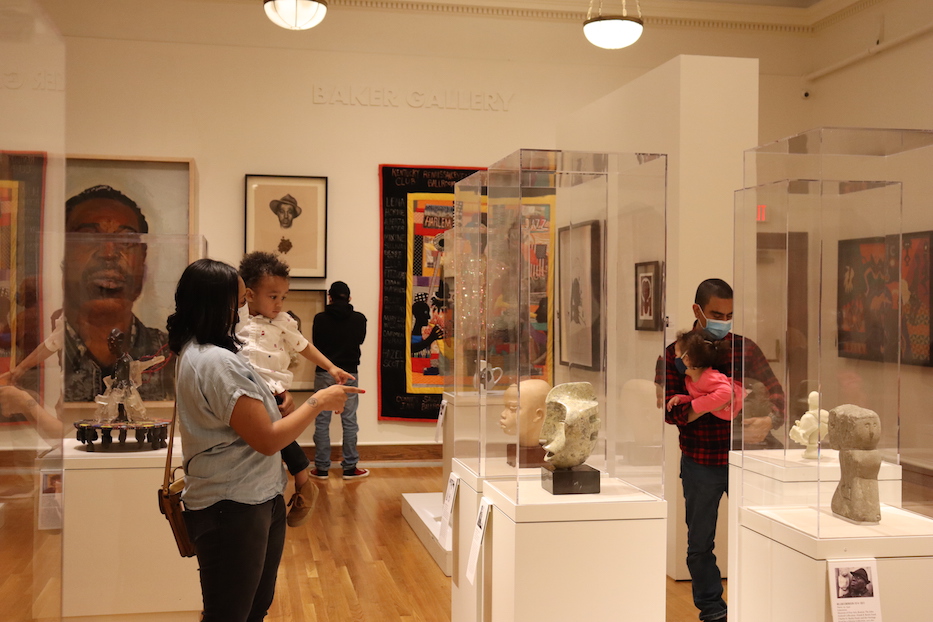 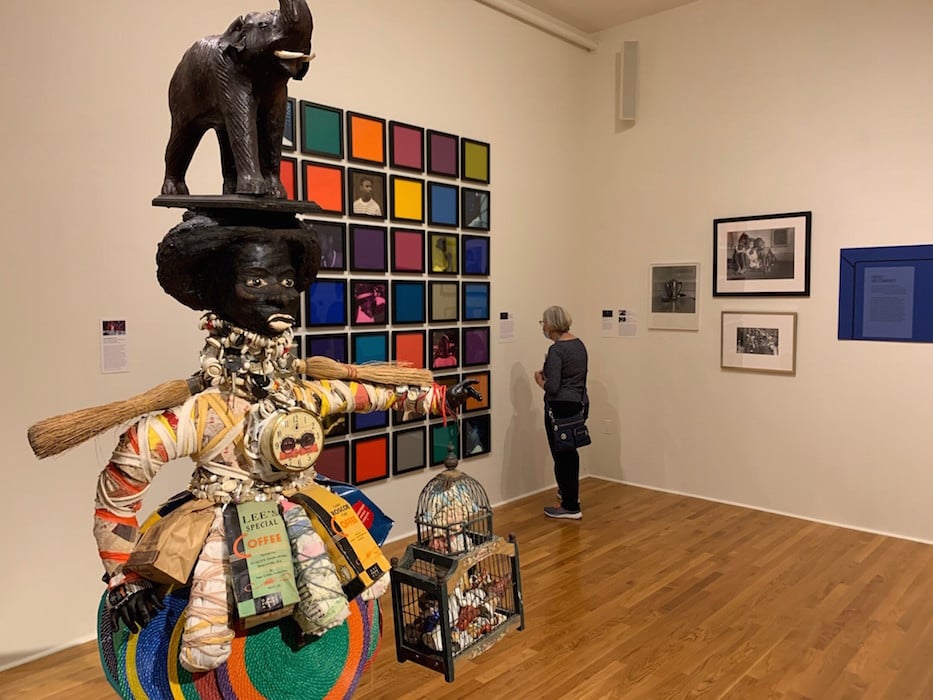 Kehinde Wiley’s large painting Portrait of Pablo de Valladolid, Jester of Philip IV greets viewers from the elevators on the third floor of the Mattatuck Museum. A young Black man wears a black jersey with the word “Harlem'' sprawled across his chest in yellow letters. His stance mirrors the composition of Diego Velázquez' eponymous painting from 1635, but Wiley has updated the 17th century jester into a more confident and contemporary subject.

A gold filigree swirls around this man, breaking from the background. With these disruptions, Wiley discards the old convention of figure/ground, and this decorative element overlaps the man’s lower half. The intricate curlicues entangle his legs as if locking him in place. Or perhaps he is escaping.

A portrait of a Black man by a Black artist in an opulent black frame, Wiley’s painting celebrates both the community of Harlem as well as the identity of his subject. This work is one of 75—created by over 50 Black artists, depicting various facets of Black identity—on view at the Mattatuck Museum’s exhibition A Face Like Mine. Through paintings, sculptures, photographs, and textiles, the exhibition unites a broad sampling of figurative art.

Together, the works touch on the experiences of Black people in the United States over the last century. The exhibition runs through Sept. 12 of this year.

A Face Like Mine opens a new chapter for the Mattatuck. Organized by Mattatuck Museum Curator Dr. Cynthia Roznoy and Martina Tanga, curatorial research and interpretation associate at the Museum of Fine Arts, Boston, the show coincides with the expansion of the space. It includes a list of artists such as Romare Bearden, Elizabeth Catlett, Kerry James Marshall, and Lorna Simpson. It also represents a direct effort to engage with the  Waterbury community, which is largely Black and Latinx. With the enlarged entrance and strategic programming, the renovations seek to present a more welcoming museum to the community.

A Face Like Mine is the museum’s largest and most ambitious exhibition related to the experiences of Black people. Past exhibitions zeroed in on specific places or aspects of Black culture, while the current exhibition focuses on figuration. Through the works on view, Black artists depict and reflect a period of radical change—from 1920 to the present—with examples arranged into five categories. They include Photography, Investigating Identity, Performance and Entertainment, The Art of Politics, and Friends and Community. 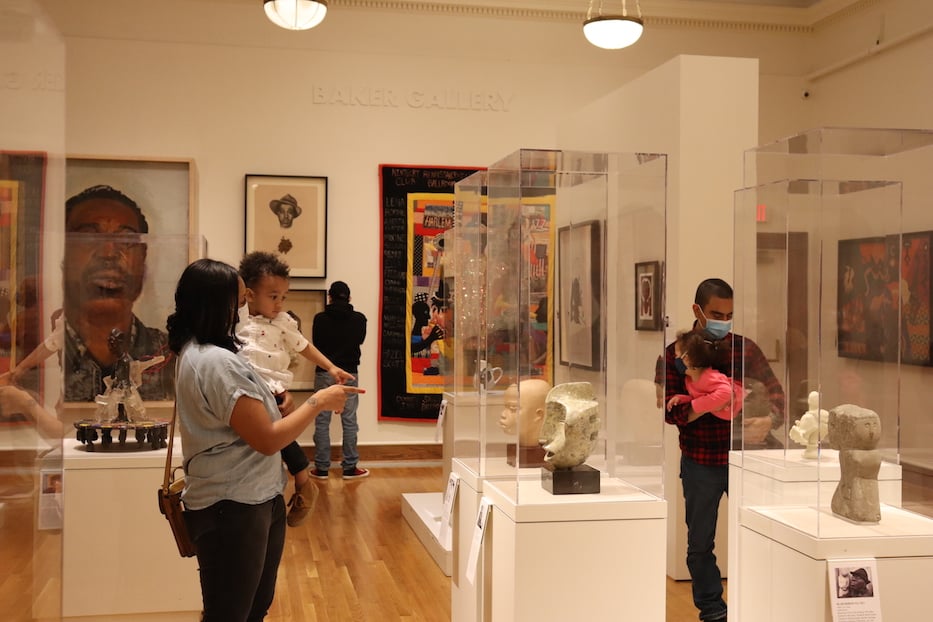 However well-intentioned, the signage for the show’s themes is easy to overlook. Inside the second gallery, it feels unclear where one category ends and another begins, as is the case for the artworks on view. Entertainment and politics inform identity and community, and vice versa.

Take Hank Willis Thomas’ 2009 Breakfast of Champions. This multi-media work depicts President Barack Obama in a dazzling mosaic of multi-colored cereals, echoing a narrative propagated by Wheaties: consumer choices influence success. Thomas articulates this icon of change through a common and unlikely material, emphasizing the sway of popular culture within our nation’s struggle for racial equity.

Figuration may imbue the show with a conservative tone, but the genre also lends itself to a larger scale. Many monumental paintings command attention in the show. Jordan Casteel’s Leon (2016) has been placed near Barkely Hendricks’s Brenda P (1974). While Hendricks removes the background to highlight the dress and personality of his subjects, Casteel relies on the ambience of Harlem to bring insight to the men she painted in her series.

Meanwhile, across the room, the oversized face of Enocio by Sedrick Huckaby presents a powerful picture of one of the artist’s friends. Thick impasto oil paint pronounces the nose and lips of the face, stressing the physicality of the facial features and the person. The heavy paint application asserts the identity of the sitter. The accompanying wall text explains that Huckaby sees painting as a means to upend hostility and oppression, saying, “The African American experience—our struggles, advancements, curiosities, culture, faith, and families—has always been the great story of my work.”

A Face Like Mine offers viewers many glimpses into African American experiences, and the shortcomings of the exhibition are perhaps tied to the enthusiasm of the curators. The volume of work included exceeds the available space, expansion notwithstanding. In places, the works compete with each other. Two surprising and petite works by Romare Bearden are nearly hidden behind a floating wall near the entrance to the show.

However crowded the show may be, several works mesmerize, including Kerry James Marshall’s Supermodel (1994). The soft expression of the model contrasts the extreme blackness of his skin. In Marshall’s work, blackness reads an infinite depth, not a void.

With an arm lifting the shirt of the subject, Marshall reveals the beauty of a Black male body in a coy gesture that is at once defiant and vulnerable.

Meaningfully, the show does not conflate the experiences of this varied group of Black artists. Still, the absence of video or other more contemporary forms comes across as a missed opportunity for an institution invested in reaching younger audiences. Viewers may also leave the show wondering, what would A Face Like Mine have looked like under the guidance of a Black curator?

A Face Like Mine runs through Sept. 12, 2021 at the Mattatuck Museum in Waterbury. For museum hours and more information, visit the Mattatuck's website.