Two Years In, Fashionista Makes Its Mark On MarlinWorks 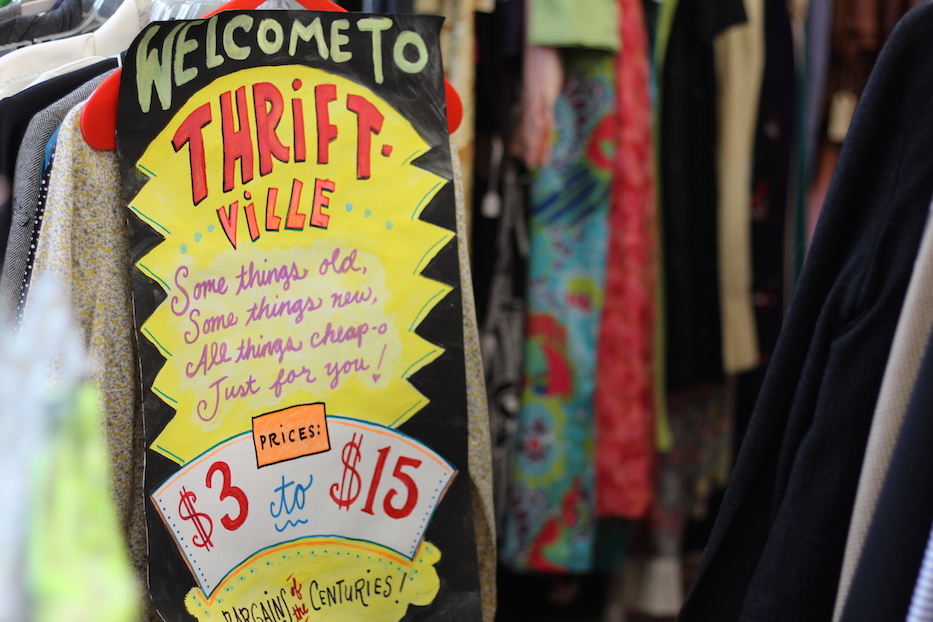 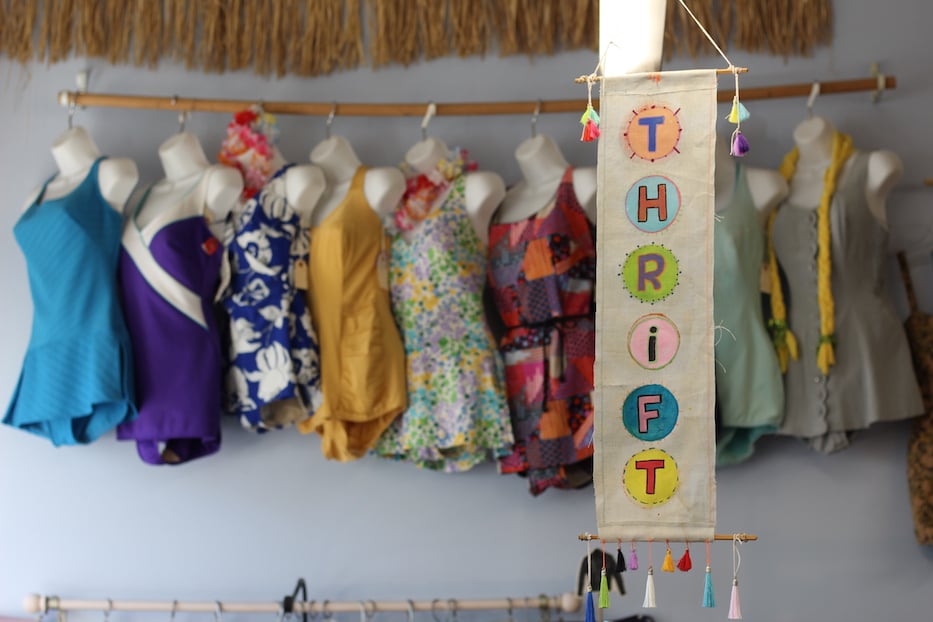 A customer whisked through the door of Fashionista Vintage & Variety on a mission. Their words carried through racks of cotton shirts and jackets, skirts and sequined dresses, a pair of zebra-patterned hats, and antique furs.

“I wanted to ask if you are still renting your panda head?”

“Sure, we can do that,” a voice came from the counter. “Not sure where that one went; let me check our other heads. Do you need it for today?”

This is an everyday occurrence at Fashionista, the well-loved vintage spot that now lives in the MarlinWorks Building at 85 Willow St. in New Haven's East Rock neighborhood. Inside, owners Todd Lyon and Nancy Shea have been running their business for almost 20 years, over several different iterations and locations in New Haven.

The store is open Friday and Saturday from noon to 5 p.m. and by appointment. 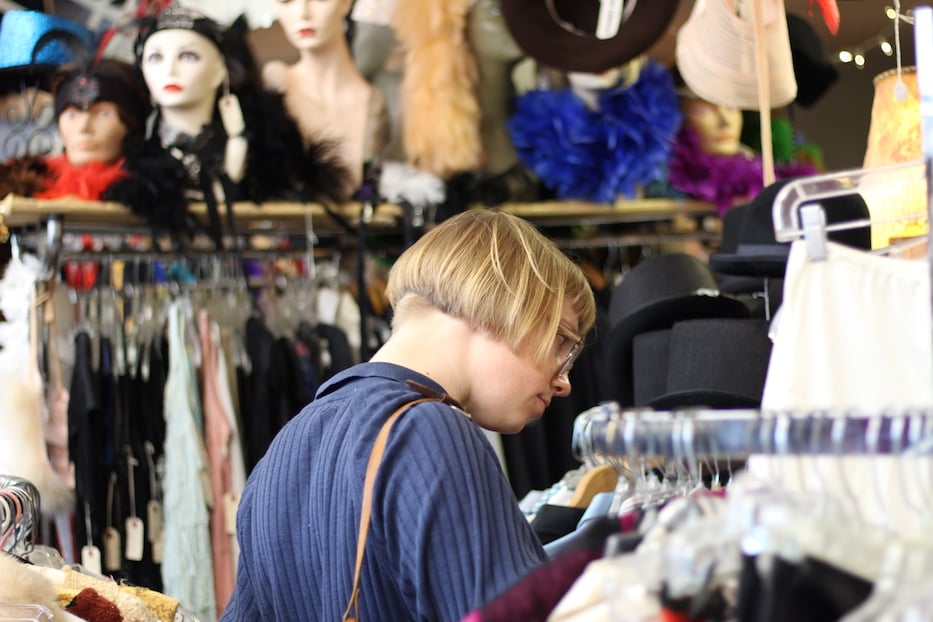 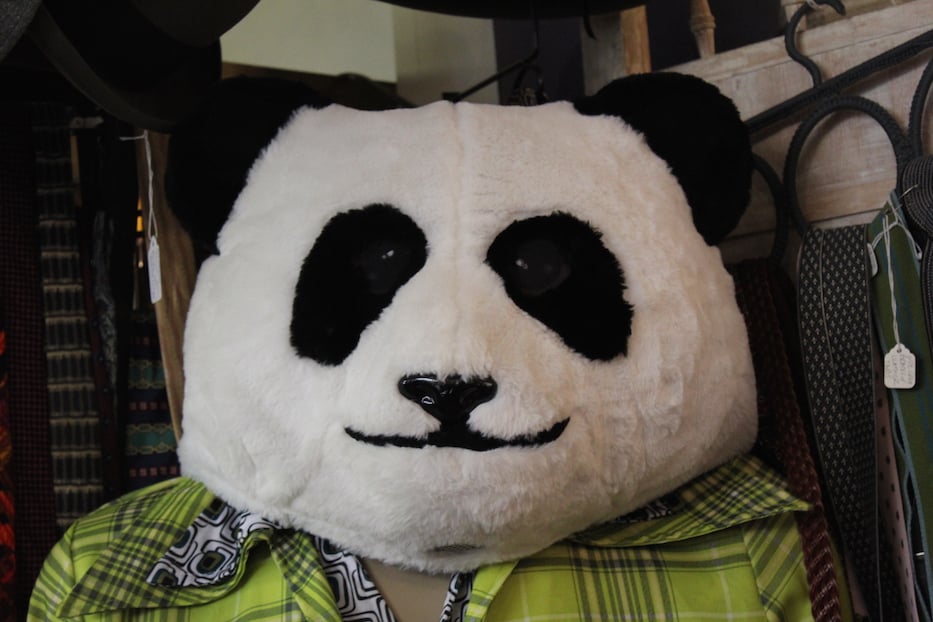 “Having that magic moment when somebody slips into something and it's so right,” is what keeps the two in business, Shea said. “And so often those are the things that have maybe been in the shop for five years and nobody’s really been able to wear it because it doesn't fit or whatever. And Then all of the sudden that person comes along and it’s a Cinderella moment.”

The funniest part of their business is that they never intended to own a store.

Fashionista started out as a one-time tag sale. In 2004, Lyon and Shea decorated Shea’s apartment, then at 977 State St., to look like a storefront. Lyon, who lives nearby in the city’s East Rock neighborhood, brought clothes of many different sizes. After she made a career shift from being in a band to being a restaurant reviewer, “I gained ten pounds every year so I have every size,” she said. The pop-up was a hit.

Three years later, the two opened a Church Street storefront in 2007. Then they got a visit from a vintage dealer who gave them his collection. When downtown rents spiked in 2010, the two moved into the 93 Whitney Ave. storefront for which they were known for a decade. Lyon used to call it the “glam and cheese corner,” in honor of the now-departed Caseus Fromagerie & Bistro on the corner.

The two moved from Whitney Avenue in July 2020, four months after watching business slow with the Covid-19 pandemic. They found a space in the MarlinWorks Building at 85 Willow St. that same summer, and opened their doors once again on August first of that year.

Because it is smaller than their previous store, Lyon and Shea have made use of the entire space, with built-in features that they’ve repurposed as extra shelving. The store is made up of one room with round racks holding clothes of all different colors and patterns. On top of each rack are animal heads (for the animal enthusiasts out there, they’re just masks—although there are real mink and raccoon furs) and platform shoes. 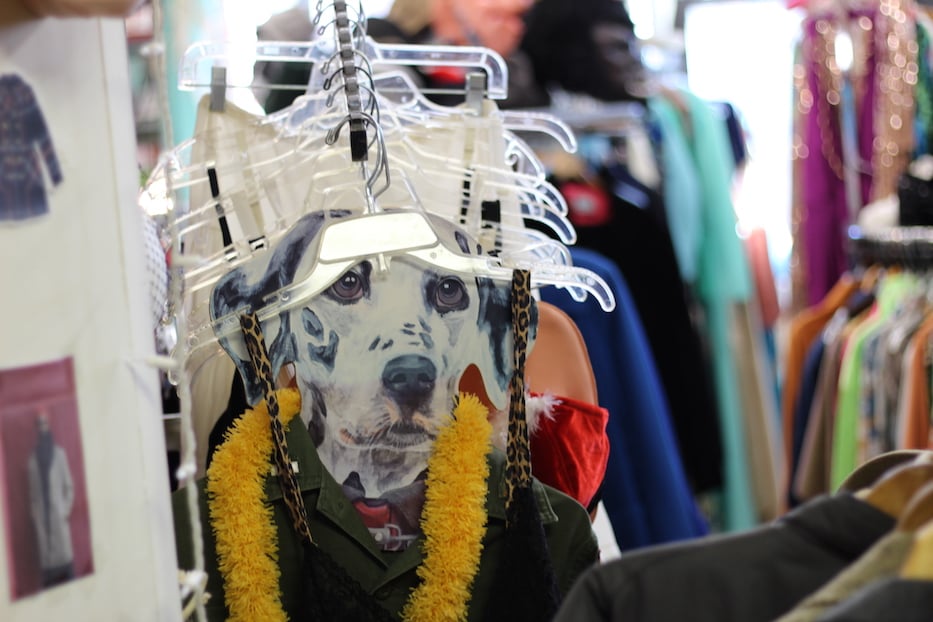 Overhead, bamboo sticks hold up old house dresses, formal frocks for rent and for sale and vintage bathing suits. There are floofy tulle skirts, as well as metal hat holders with a variety of different looks for everyday or special occasion. There’s even a mustache, in an individual plastic bag, for rent.

Shea and Lyon are big on having customers find clothes that they love, they said. There is a sitting area with white chairs just outside the dressing room, a space carved out for fashion shows with friends, discovering a new look, or trying on a fitting prom outfit—all of which have been accomplished there. Most recently, Lyon and Shea rolled out “Persnickety Thrift,” a new part of their business model where they curate and sell non-vintage clothes for a fraction of the price.

The oldest piece in the store is an ancient Egyptian scarab, according to the owners. It was made into a pin at some point in history, Lyon said, during a recent visit. You can still see some of its original green color, but most of it is stripped. On the back there are authentic hieroglyphics. When they had it authenticated, they found out the scarab was between 500 and 1,000 years old. 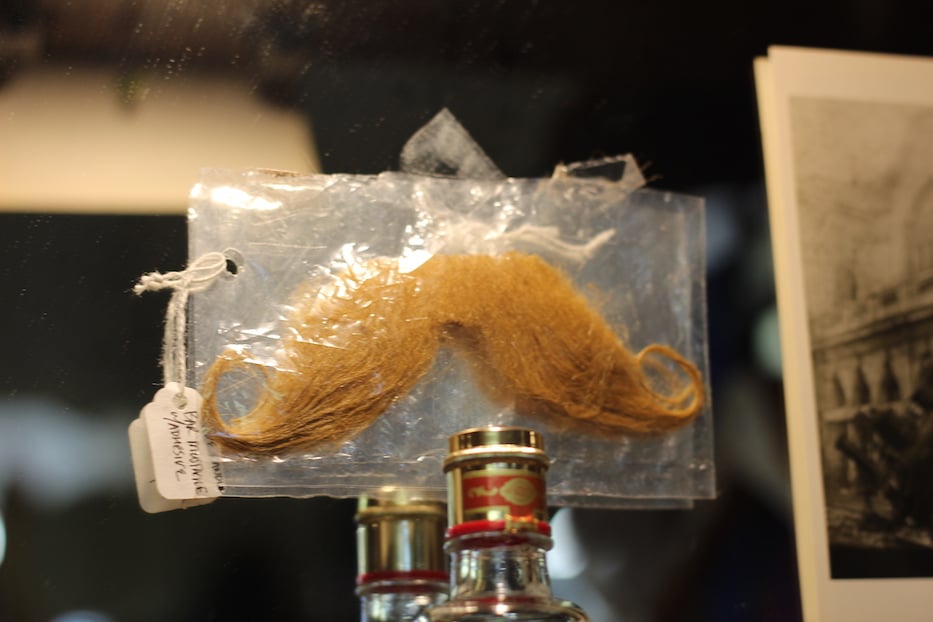 Shea and Lyon make a point not to buy anything new, they added. Instead, they put thrifty, sustainability-focused effort to everything they do, whether it is fixing up clothes by removing stains or making alterations. They reuse fabric as bags and hand write all their signs and tags. They write the tags after doing research and using their prior knowledge to identify each item.

Fashionista attracts a wide range of customers, and Lyon and Shea work to support them all. Whether it’s a special occasion outfit, or something for a costume party, they have probably got your back. And your front too.

Several years back, a man came in wearing khakis, a blue button down shirt, and a blue tie. He needed a costume for a dress up party, he told the pair. With a little help from Lyon and Shea—and his inner hidden rock star personality—he left wearing a one-piece low V-neck orange bodysuit, leather jacket, and sunglasses. It was one of their favorite transformations. 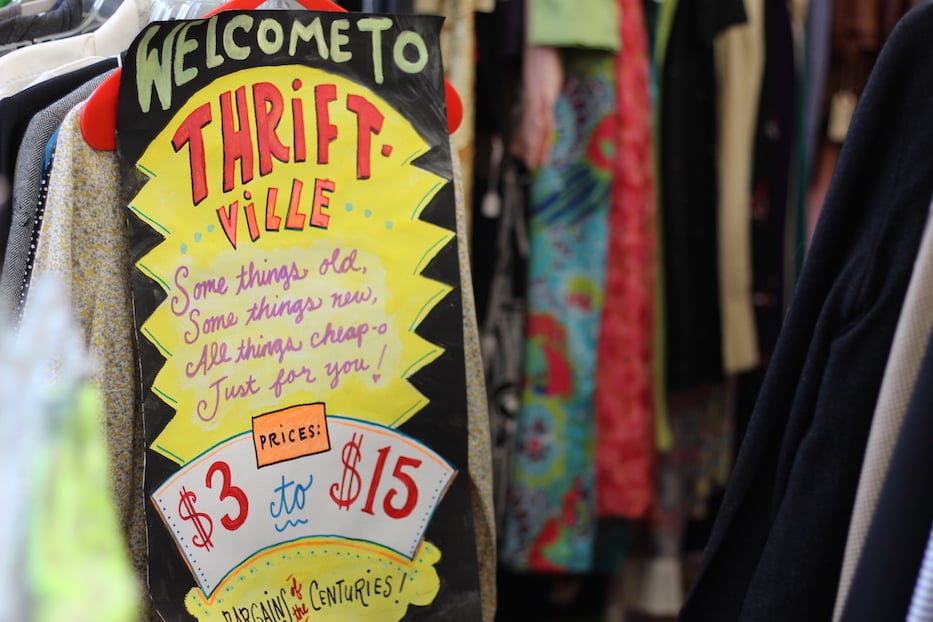 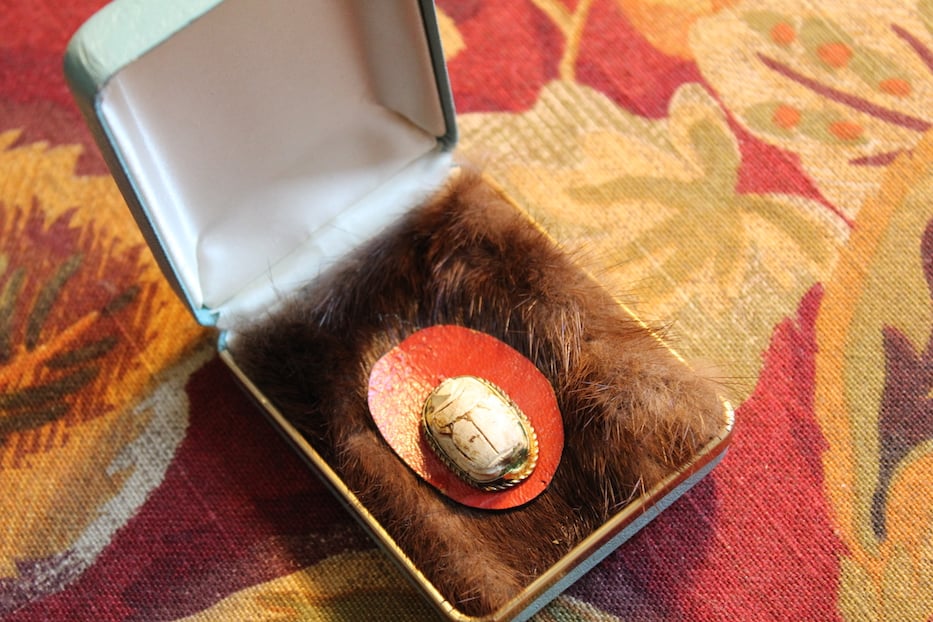 The two said that once he had the outfit on, it was clear that he had always had that rockstar in him. With his changed appearance, his body language changed as well, down to the way he stood. When he went to the party, no one recognized him.

That is the magic of what they do, Shea and Lyon said. The store is a gateway to bygone eras and personalities people are trying on for size. The clientele is diverse, from students at the Yale School of Environment (Lyon said that they throw more parties than any group at Yale) to lifelong New Haveners who knew the city in the 70s and 80s. Many come to rent costumes, animal heads, and more.

Shea is a long term advocate for doing what is good for the earth, she added. Before co-running Fashionista, she worked in environmental planning for 30 years. So it’s no wonder that she and Lyon are big on repurposing and making their store sustainably sourced as possible.

“People get shopping bags with their names on them. Nope. Not us,” Shea said. “You get a stick and a hobo bundle. The great thing is, it’s a great signature. People know where you’ve been. Or they’ll think you’re crazy. Either way, it’s good for us.”

Fashionista Vintage & Variety is open Friday and Saturday from noon to 5 p.m., and weekdays by appointment. This piece comes to the Arts Paper through the fifth annual Youth Arts Journalism Initiative (YAJI), a program of the Arts Council of Greater New Haven. Read more about the program here or by checking out the "YAJI" tag. Lily Sutton is a rising junior at the Sound School.