In Call For Immigration Reform, Rebel Diaz Sets A Soundtrack 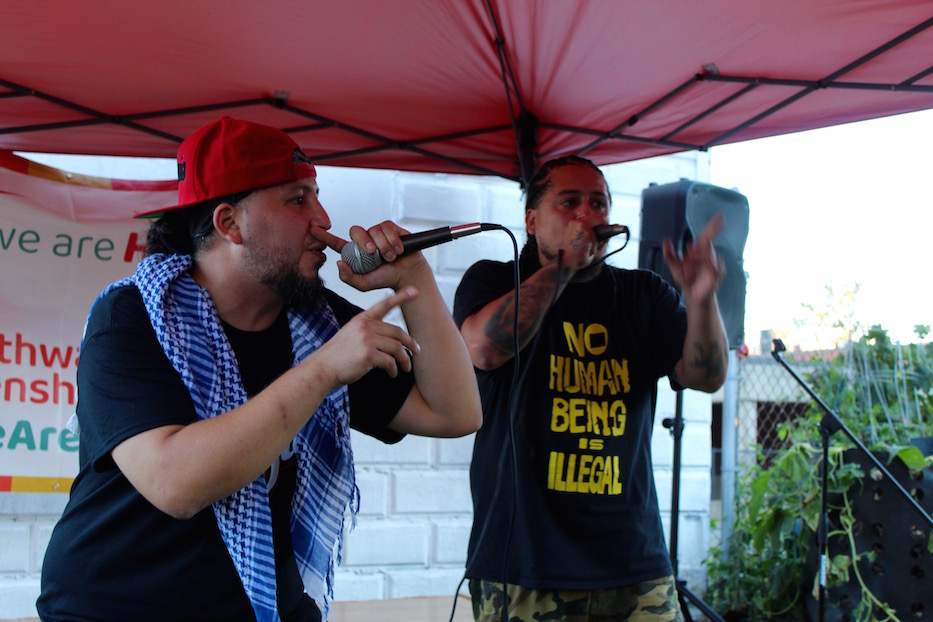 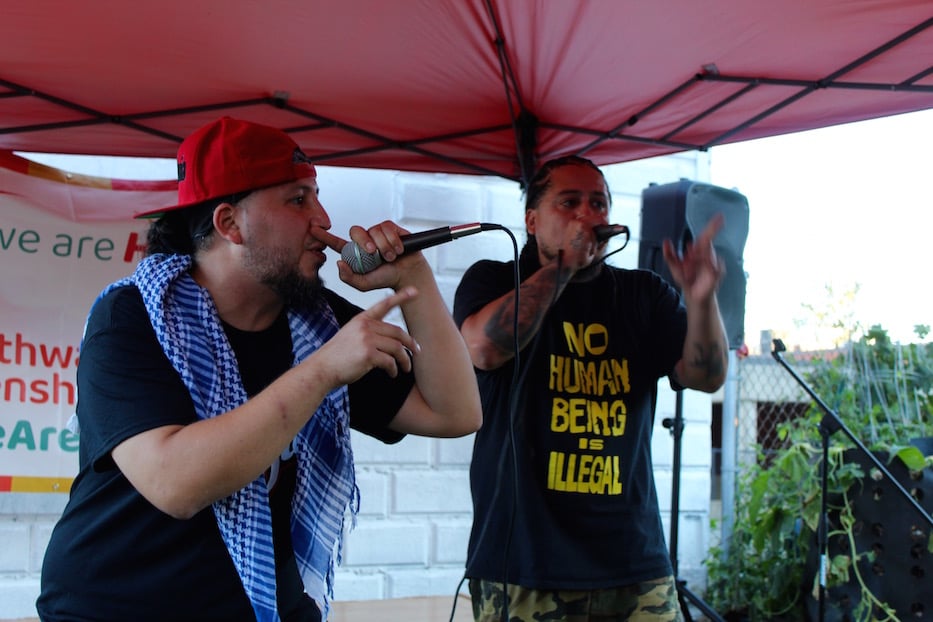 In a Howe Street backyard, labor activist Florence Reece was still speaking. Her words pumped from a speaker system: Which side are you on, boy? Which side are you on? In each line, her message from a 1931 labor strike echoed through a current crisis for undocumented workers. On stage, Rodrigo Venegas lifted the microphone to his mouth, and brought her past right into his present.

Sunday afternoon, Chicago-based hip-hop group Rebel Diaz joined a call for immigrant justice at the New Haven People’s Center, where artists, activists, and immigrant families all outlined the need for a clearer path to citizenship for millions of undocumented immigrants. In particular, attendees spoke on the importance of creating stronger protections for Dreamers, TPS (Temporary Protected Status) holders and essential workers, thousands of whom have kept New Haven running during the pandemic.

The event was organized by Unidad Latina en Acción (ULA) and Black and Brown United in Action. Over three dozen attended.

“They need us,” said Luis Ramirez, an Ecuadorian immigrant who has been a member of ULA since 2001. “We work construction. We work the fields. We work in the health system. We work in cleaning. We have been in all of the jobs that the United States needs to get through, but we are not valued as human beings. That's why now is the time. We should struggle. We should talk with our families and we should take the streets."

The event comes in the first year of an administration that has promised to reverse severe Trump-era policies and create an easier path to citizenship, but has not yet passed legislation to make that a reality. Even as ULA members made their case in New Haven, immigration officials began the forceful and violent removal of thousands of Haitian migrants from Del Rio, Tex., a city that sits on the U.S.-Mexico border. 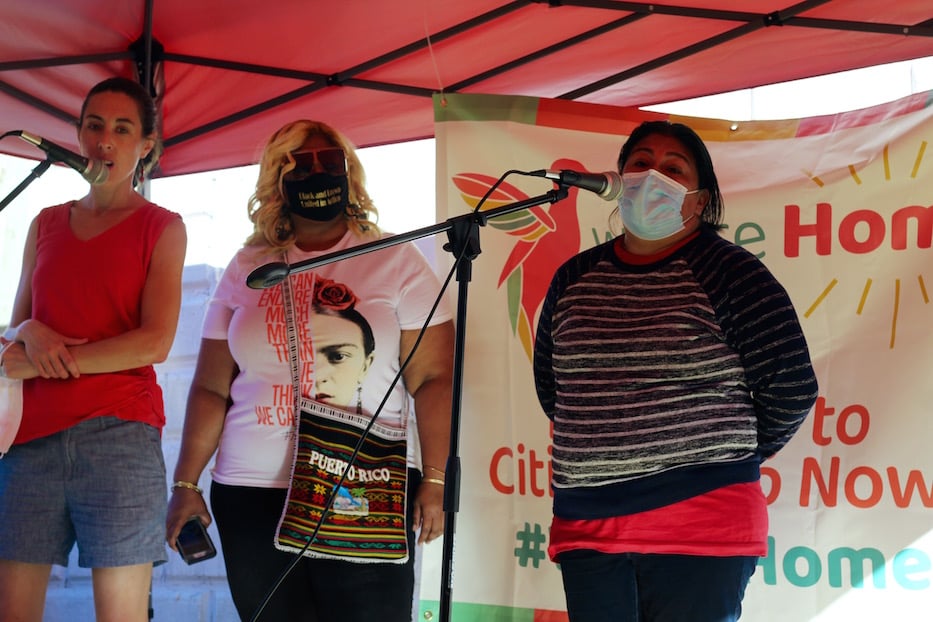 Sunday, speakers carried their message through dance, song, spoken word, and urgent calls to action. On the sun-soaked lawn outside the People’s Center, members of ULA flipped burgers, chatted with each other and explored the new Assata Shakur Community Garden that stretches along the back fence. Bright banners peeked out with anti-war slogans and calls for worker solidarity.

Ramirez walked around with a sign in sheet and clipboard, scanning the crowd for new faces. A handful of immigrants from Guatemala's Indigenous Mam community, who later graced the stage, dotted the space in their finely woven huipiles and shawls.

Back at the stage, Hermelinda Gutierrez took the mic. A cleaning worker at the University of New Haven, Gutierrez is part of the nascent Nora Garcia Collective, named after a fellow worker who contracted and later died of Covid-19 in the first months of the pandemic. While they cannot know for sure where Garcia contracted the virus, members of ULA believe and have said it was likely at her job.

“For us, it's important to have an immigration reform for essential workers,” said Gutierrez in Spanish, a medical mask fixed tightly over her face. Megan Fountain, ​​coordinator of advocacy and partnerships at ULA, translated every few sentences. “We've been fighting for decades, more than 20 years, for reform. For rights as workers, for civil rights. For human rights. Because we contribute to this country with our taxes and with our labor. Because we are not a burden for the government.”

Without a viable path to citizenship, she said, exploitation of undocumented laborers is bound to escalate and continue, from restaurant kitchens to hospitals to farms and everywhere in between. She pointed to wage theft, long hours, lack of medical benefits, and “the domestic violence that is enacted by the state,” including police brutality and tacit (and in Connecticut, illegal) cooperation between local and state police and Immigrations and Customs Enforcement officials.

She looked at the way current immigration policy divides families, sometimes across three or more countries when parents are deported to separate countries, and their children are left in the United States. For many of the immigrants facing deportation proceedings, she said, there’s no home country to go back to. The U.S. is the only home they know.

“All of us are here for different reasons, but through the years, this is the home of our children,” she said. “This is what we know. And many of us can no longer return to our countries. We have committed so much to this country, and having an immigration reform, we can give so much to this country if we have equality and respect.” 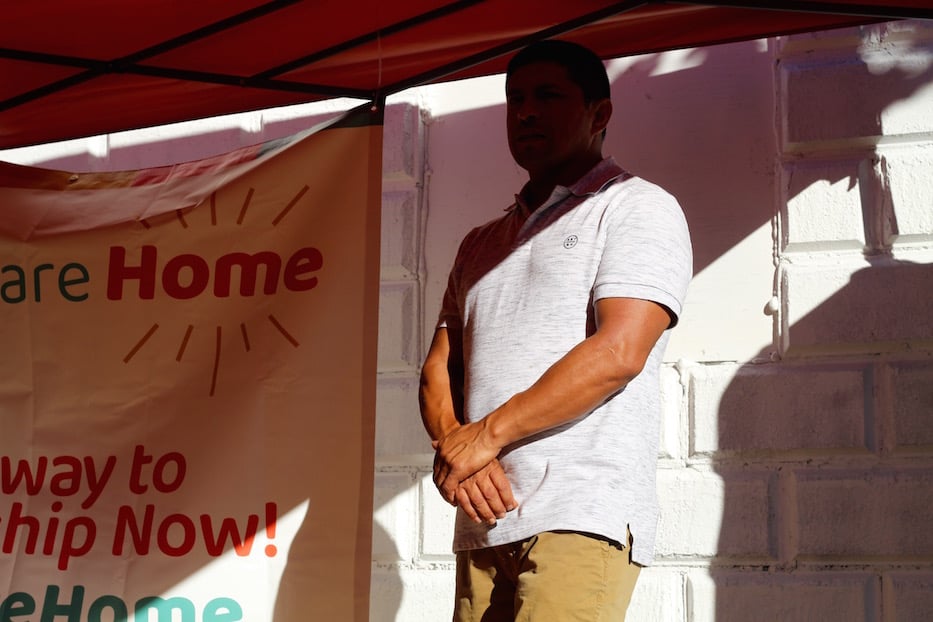 That experience rang true for Juana Islas, a Mexican immigrant who became involved with ULA in 2012, when Hamden cops turned her brother over to Immigrations and Customs Enforcement. Nine years ago, she successfully helped him fight detention and deportation proceedings. Now, almost a decade later, she said that very little about the system has changed. During the pandemic, both she and her husband fell gravely ill while reporting to their jobs. The lack of workplace protections meant that her husband had to return when he was still very weak, she said.

“There's too much struggle, too many injustices, and we need immigration reform,” she said. “We who are undocumented immigrants, we need to be treated with equality and dignity. Undocumented workers did essential work during the pandemic. We deserve to have the same rights that everybody has.”

Their message flowed through spoken word and rhyme as the poet Thumpash and musician Yeshua Unity took the stage, preaching a sweeping kind of acceptance that jumped from anti-capitalism to the prison industrial complex to internalized colorism in immigrant families. It rippled across a performance from members of the Mam community, who are working to keep the culture of their native Guatemala alive in New Haven.

And it laid the foundation for Rebel Diaz, the long-simmering brainchild of brothers, musicians and activists Rodrigo and Gonzalo Venegas (or as they are more commonly known in their music, RodStarz and G1). The children of Chilean exiles, the Venegas brothers grew up in the U.S. after their parents fled the U.S.-assisted overthrow of Chilean President Salvador Allende in 1973.

The two perform in a mix of English and Spanish, sometimes knitting the two together for sentences that sound like the streets.

“When we talk about revolution, we can’t be scared to get busy,” Gonzalo said before dipping into the set.

Bouncing from one corner of the stage to the sun-dappled front rows, the two tied worker rights to the current struggle for sanctuary, sailing through decades of labor history with a love song to essential workers across the U.S.  They turned their lyrics into a kind of map, jumping from from their hometown of Chicago to New Haven to a humanitarian crisis at the U.S.-Mexico border. 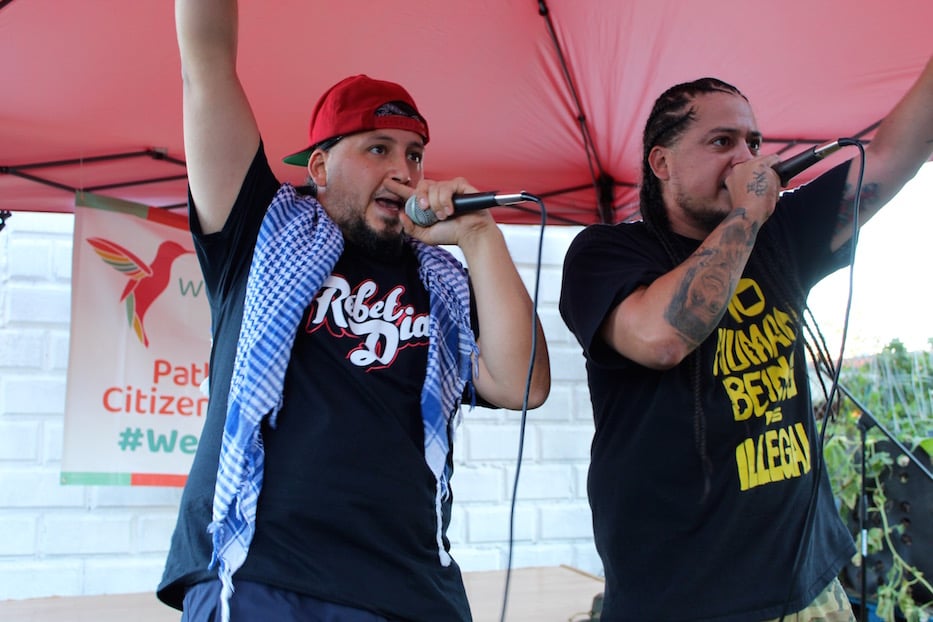 Before launching into a remix of “Which Side Are You On?,” Gonzalo reminded attendees that the source text came from Reece, a poor woman in Appalachia who wrote it during the 1931 miner’s strike in Harlan County, Kentucky. Reece’s husband was an organizer for the United Mine Workers of America. Her words against authority and corporate America still resonate today, Gonzalo said.

“We ain’t cross the border. The border cross us,” he said, Rodrigo jumping in every few word until the two were finishing each other’s sentences. “... There’s two types of crime. There’s crimes of power, and there’s crimes of survival. Genocide is a crime of power. When we say ‘Which side are you on?’ we’re going to be clear about it.”

Reece’s words became a hook, holding the weight of a movement that has seen 90 years of change since she first wrote them. As they scrolled for the backing track to “Soy De Aqui,” both brothers asked attendees to shout out their hometowns. Cries from “Mexico!” to “Guatemala!” to “Boston!” filled the warm air.

The concert came just hours before one potential setback for reform, as the Senate parliamentarian blocked an effort to weave citizenship for undocumented immigrants, Dreamers and TPS holders into the proposed Build Back Better plan. Monday, Fountain wrote that “in light of the ruling, we demand that Democrats move forward with alternative avenues to win immigration reform.”

“Democrats must deliver this year,” she wrote in a follow-up email Monday evening. “They must use their majority in Congress and use every opportunity at their disposal to deliver on the long-overdue promise.  We are fighting to win!”