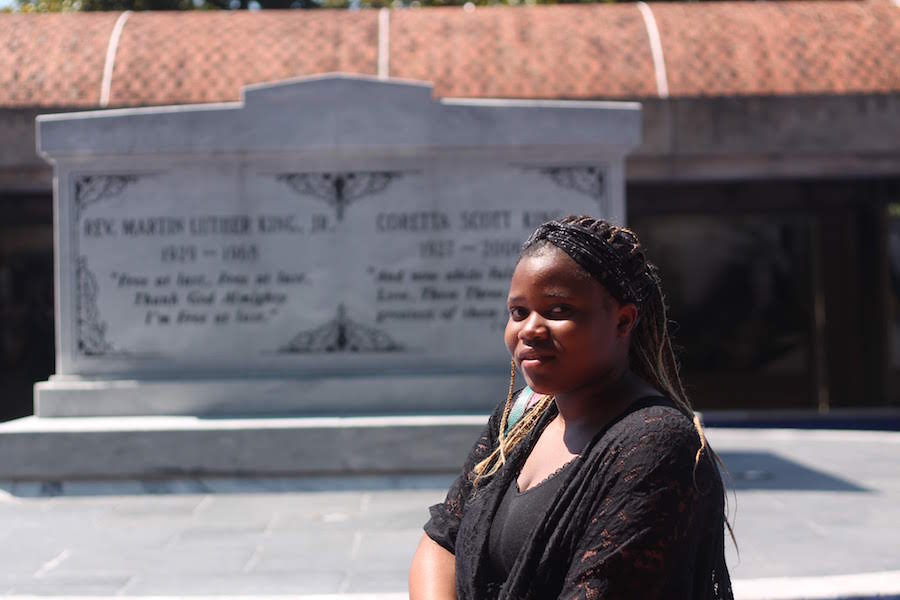 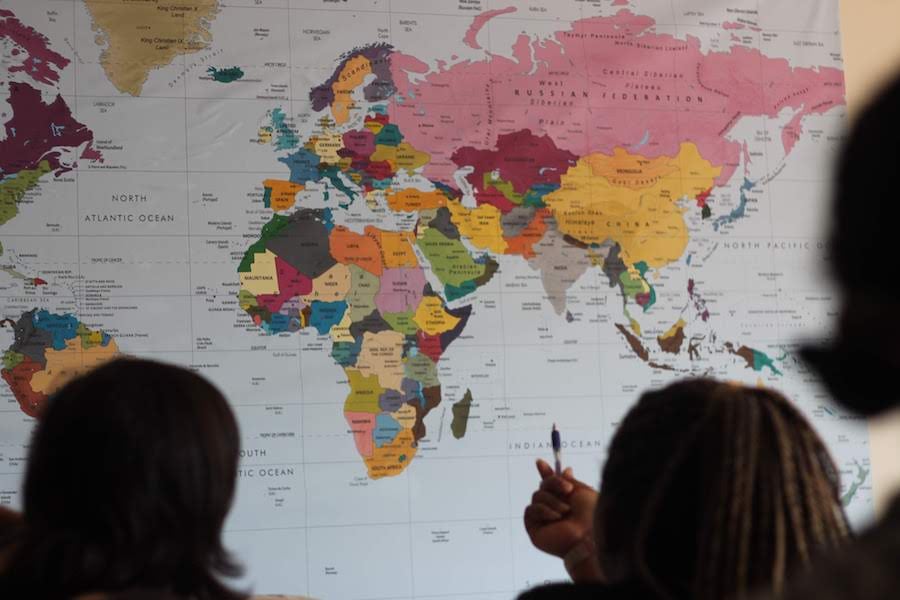 South African homes bulldozed during apartheid, the debris now preserved in acrylic glass. Soil collected from lynching sites throughout the American South, gathered in jars at the Montgomery Equal Justice Initiative’s new Legacy Museum. An abiding fire on blue coals, the “Eternal Flame” above Martin Luther King, Jr.'s crypt. His vision of the Beloved Community, engraved on stone: An engine of reconciliation.

These are just a few of the images 12 refugee young women are carrying with them—to their African and Middle Eastern communities in New Haven, back to their high schools, and off to college—after a a Civil Rights field trip to Virginia, Georgia, and Alabama this summer. The trip was an initiative of Integrated Refugee & Immigrant Services’ (IRIS) Young Leaders’ Program.

“Not only did nonviolent resistance work in the past,” said Gladys Mwilelo, a rising sophomore at Central Connecticut State University (CCSU) and one of the young leaders on the trip. “We need to use it today.”

Gladys and her sister Lola are young Congolese leaders who resettled to New Haven with their family five years ago. Soon, they’ll be American citizens.

On the civil-rights trip, Lola led her peers in freedom songs during the long bus ride from Richmond to Atlanta. On the way to Montgomery, the young women engaged in a heated discussion of the ethics of art acquisitions: ceramic bowls stolen from Africa and the Middle East, now housed in glass cases at the Birmingham Museum of Art. 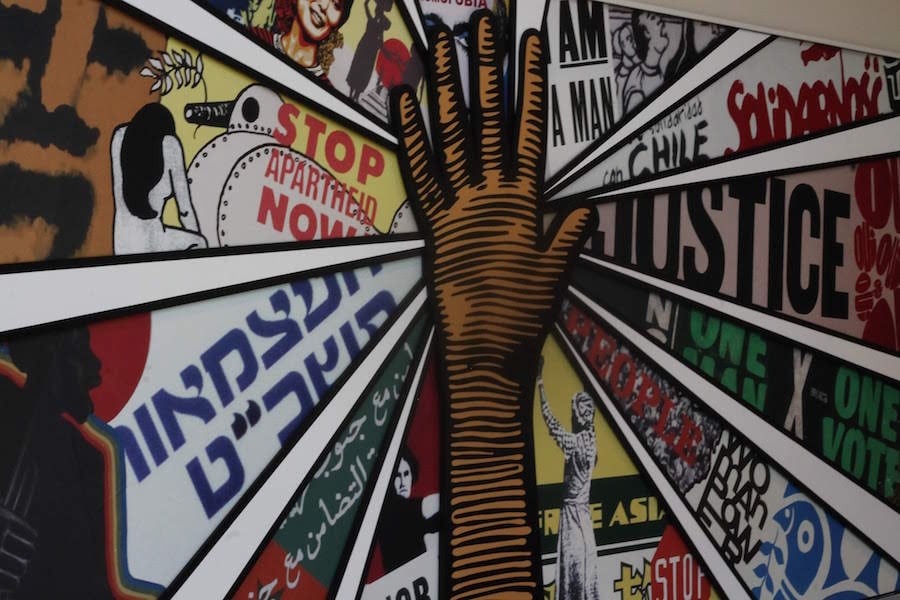 “We don’t have anything in our country to keep now,” said Deyana Al-Mashhadani, an Albertus Magnus student whose family fled their home in Baghdad, then lived in Syria until another war drove them to Turkey.

Forced migration is only part of these young women’s stories. They are refugees, and they are new Americans, who are eager to be agents of social change. They get why the kids who participated in the 1963 Children’s March were happy. They listened to the testimony of a woman who went to a Birmingham jail as a girl, along with hundreds of her peers, with the rabble-rousing humor of the movement. “We were glad to be arrested,” she said. “It was fun.”

Mariame Kazadi (pictured below, at King's tomb) listened with a spark of recognition. She said she knows the gladness and magic of marching—her family has participated in IRIS’ Run for Refugees since arriving in the U.S. The week of Donal Trump’s first federal travel ban in February 2017, the run gave way to a march and rally, drawing over 3,500 people to the New Haven Green. Mariame’s dad Joseph, who’d been targeted for his work monitoring elections in the Congolese capital city Kinshasha, wrote a thank-you letter to all who came out to march for refugees on that cold Super Bowl Sunday.

“What a show of solidarity!” he wrote. “Along the way, even though I had a smile on my face, my heart was flooded with tears to see you climb that hill with us.” Joseph adapted the letter into a monologue that he performed in The American Unicorn, Long Wharf Theatre’s first storytelling collaboration with refugees. The play, like the march, combined protest with celebration. 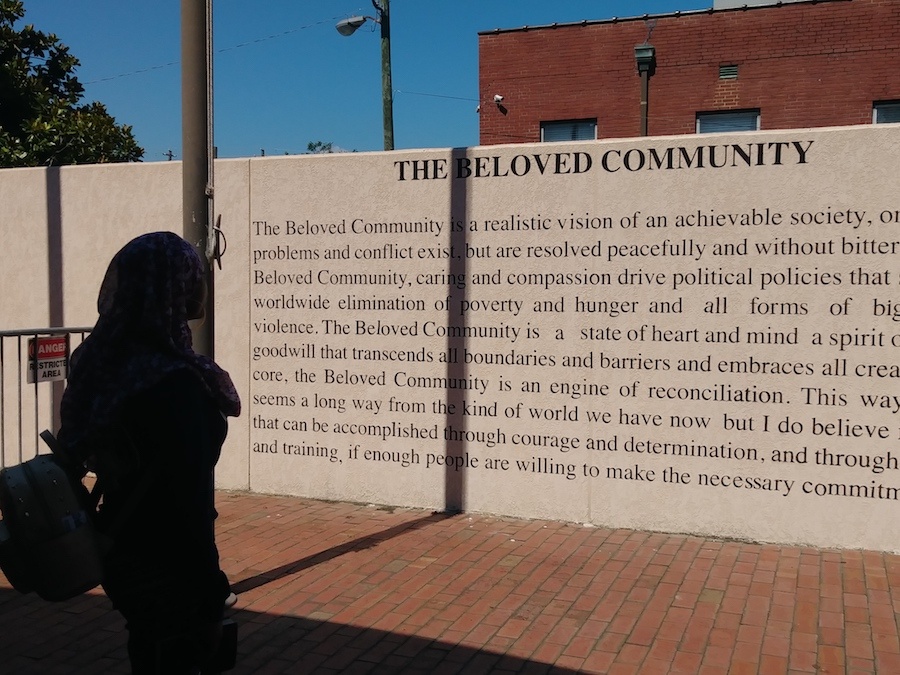 The young women leaders traveled over 1,000 miles together, from New Haven to Montgomery and back. Part road trip, part slumber party, part pilgrimage, the journey to the South was an itinerary of living history. Gladys made sure everyone was awake on time to start the jam-packed days of visiting sites like Atlanta’s oldest African-American mosque, the new National Memorial for Peace and Justice in Montgomery, and the Martin Luther King, Jr Center for Nonviolent Social Change.

When Gladys came upon a sculpture of Gandhi in Atlanta, she said “Bapu!” a term of endearment she learned for the leader of India’s independence movement. She called her sister over to take a photo. The two have studied Gandhi’s teachings on satyagraha, often translated as truth-force, the power of soul it takes to be part of a “nonviolent army.”

In Kelly Ingram Park, the young leaders did a walking tour of statues dedicated “to the foot soldiers of the Birmingham civil-rights movement.” A few of the young women stopped, appalled at the sculpture of a police dog lunging at a 17-year-old protestor. Semhar, a young leader from Eritrea, spoke of the resemblance she saw between that 1963 image and today’s police brutality against young Black men.

“Nonviolence has been left behind, in our notebooks and in our backpacks,” Gladys said.

But the nonviolent direct action strategy of the African-American civil-rights movement is alive among the 12 young women who returned from the trip in July. Gladys tried to teach the practices of nonviolence to her young refugee students in the IRIS Summer Learning Program. 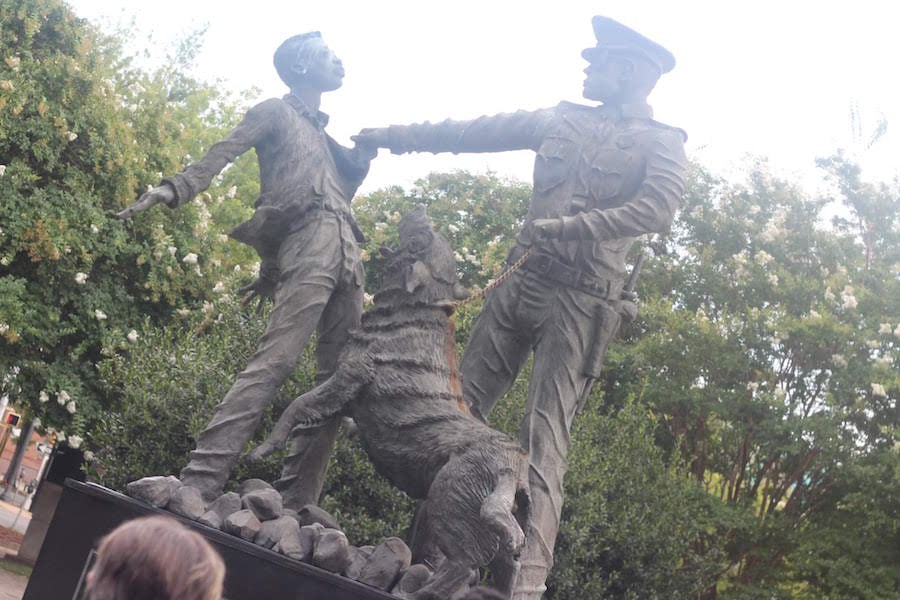 Mariame, a rising junior at James Hillhouse High School, is preparing a presentation on Birmingham’s 16th-Street Baptist Church, where over 1,000 young people skipped school to gather for the Children’s March, and four young women died a few months later in the bombing that blew out Jesus’ face in a stained glass window. Mariame said she has a message for immigrants from Africa who’ve come to the U.S., especially those of her parents’ generation: “African Americans fought for you to be able to be here.”

“I am sitting here as a [woman of color], because of them,” Gladys added in an East Rock classroom, where she was working on scholarship applications for her sophomore year at CCSU.  “Seeing these images made me aware,” she said. Gladys added that she wants other young people to visit civil-rights sites, “in order for them to feel the gravity of how social injustice was.”

The young women carry legacies of oppression and struggle, but they’re light on their feet. They love to sing. They walk together, with fun and spunk. They are a sisterhood of resilience, a force of joy to be reckoned with. To the troubles they’ve seen in their home countries, to the dark Heart of Dixie, and to the stark color lines of New Haven, they bring light. From the trip, they bring notebooks full of quotes from the likes of Rosa Parks, audio clips of them singing “Oh, Freedom” down Alabama highways, memories of belting out Adele, selfies with Gandhi.

For many of the young women leaders, the highlight of the trip was visiting the Center for Civil and Human Rights in Atlanta. In the Morehouse room, they looked at letters to Coretta Scott King in the wake of her husband’s death. Some are condolence messages. Some are threats, with a chilling resonance with today’s hate speech: “Go back to Africa, NOW.”

One of the most troubling exhibits in the museum simulates the Greensboro lunch-counter sit-ins of the 1960s. “How Long Can You Last?” asks a caption above a diner stool.

The instructions direct you to put on a pair of headphones and lay your hands flat on the table. “Experience a simulated response to your nonviolent protest and see how long you can keep calm with your hands steady on the counter. Try it with your eyes closed.” First, you hear mocking voices, then plates clanging and breaking. The taunts escalate, and you feel a whap on the counter, a simulated kick.

The lunch-counter exhibit reinforces what the young leaders are learning about nonviolence. It’s a discipline: a direct action to disrupt injustice that requires an internal practice of resistance. In the face of aggression, your impulse is to fight back, or run away. You can train yourself to stay. You can train yourself not to fight hate with hate. You can practice nonviolence everyday. Or as Gladys said, “resilience is about endurance.”

Divine Mahoundi, a young leader from Congo-Brazzaville and a rising senior at Hillhouse, lasted the whole minute and 42 seconds of the simulated sit-in with empathy.

“You would try and find the faces that were screaming at you, insulting you,” she said. “In that moment, you could feel what they were feeling in your heart.”

In a pre-trip workshop with trainers from the Connecticut Center for Nonviolence (CTCN), the young women learned that nonviolence is “justice fueled by love.”

Aaliyah Ibrahim, a Yale student from Nigeria who assists with the IRIS Young Leaders’ Program, spoke about “the shock of forgiveness” in Rwanda.

In Atlanta’s Human Rights Movement Gallery, Gladys saw an image she recognized, a photo of an activist from the Democratic Republic of Congo who helps rape survivors. Mariame also recognized faces from her home country: kids her little brother’s age who have to work in Congolese mines to extract cobalt (coltan is also mined) for the electronics industry. She witnessed these faces of child labor next to other images of modern-day slavery, in Nike factories and in U.S. prisons.

The struggle continues—from Kinshasha, to Montgomery, to New Haven. We have the makings of a beloved community here among us, refugee young women who are training to do justice fueled by love. They carry an eternal flame.

You can hear more from the refugee young leaders about their trip at a potluck dinner on Friday, Aug. 17. Please email khebrank@irisct.org for details.