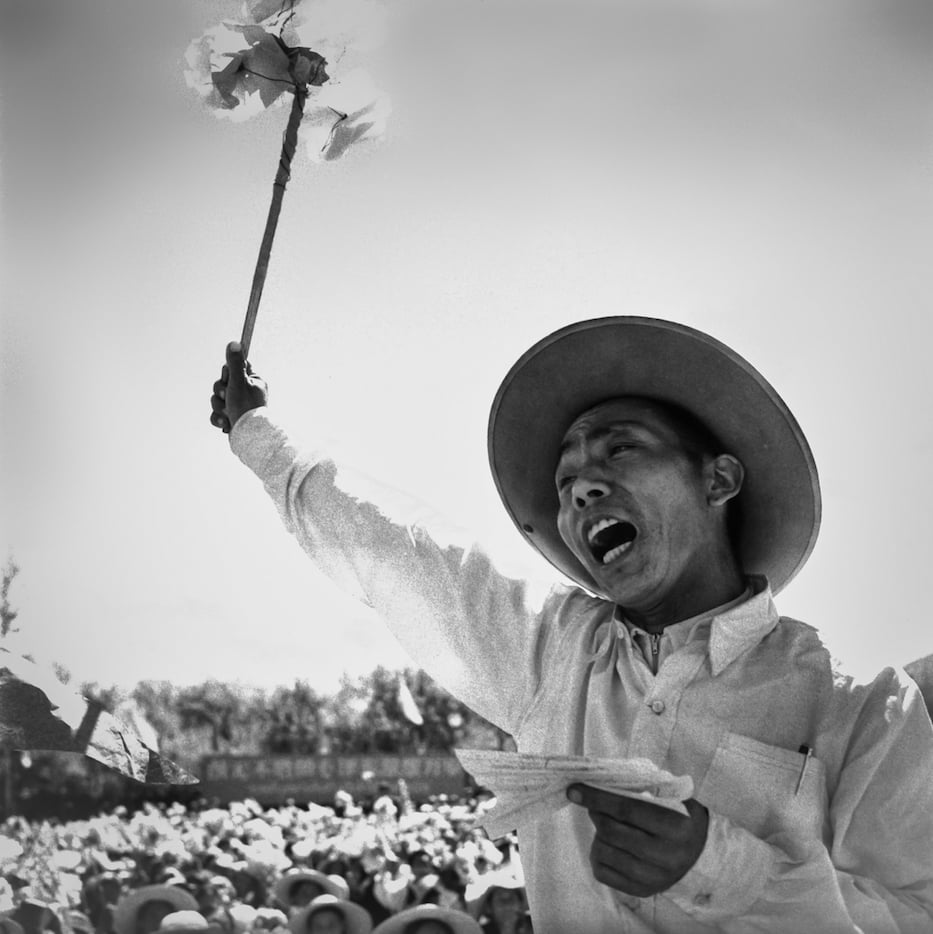 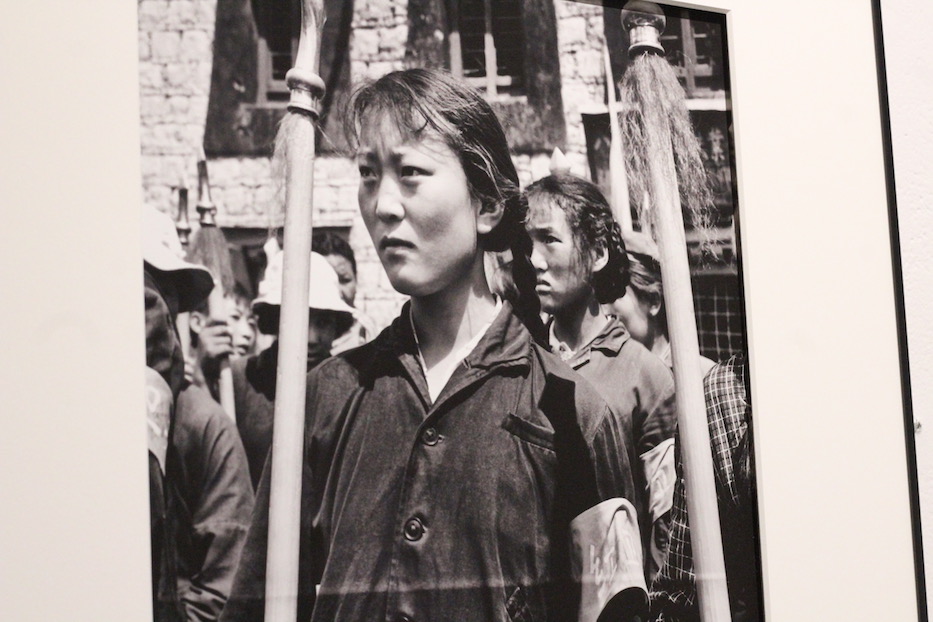 Even before you catch her eye, the Red Guard looks so very young. She faces forward in profile, eyes fixed on something beyond the frame. Her neck strains just a little. Her chin is a set and rounded square, holding so much stress it seems her face may cave in at any time. There is a whole, tiny army behind her, backs raised, uniforms creased, eyes shifting in the afternoon light. They are, in every way, just kids.

And yet, they’ve been tasked with helping usher in the Cultural Revolution, all before the end of high school.

“Tibetan Red Guards in the Teaching Courtyard” is just one of the images on Forbidden Memory: Photographs of the Cultural Revolution in Tibet by Tsering Dorje, running now through Oct. 27 at City Gallery on State Street. One by one, the photographs reveal a largely untold—and deliberately buried—story of Mao Zedong’s Cultural Revolution in Tibet, and specifically its capital city of Lhasa. They comprise a specific period of work by the late Tsering Dorje, who was an official photographer in the People’s Liberation Army (PLA).

The exhibition is curated by photographer William Frucht, executive editor for political science and law at Yale University Press, with support from Tsering Dorje’s daughter, Tsering Woeser, translator Susan Chen, and Tibet scholar Robert Barnett. From its unassuming place on State Street it is a revelation, bringing to light the violence, selective amnesia, and cultural erasure of the period. 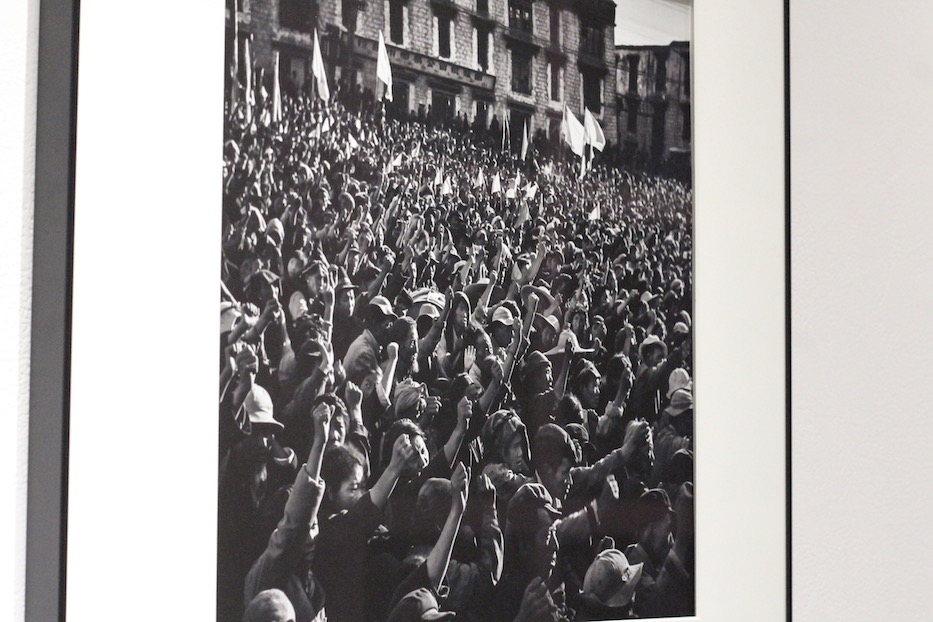 For Frucht, the exhibition’s genesis began a few years ago, when a book proposal from Beijing-based poet, writer and activist Tsering Woeser came across his desk. In the project, Woeser was pitching a book on her father’s photographs, taken in Lhasa in the late 1960s. As she explained, her father had kept several of his negatives, meaning that photographs outlived those years, and escaped complete control at the hands of the Chinese government.

By that time, she had already published two books in Chinese, from the Taiwanese imprint Locus: Forbidden Memory: Tibet During the Cultural Revolution and Tibet Remembered, the latter of which told the stories of many of the subjects in her father’s photographs. Now, she was working to get the images and their stories to an English speaking audience.

The images struck Frucht immediately. At the wildly beating heart of both books is a vivid history of violence that has been concealed and suppressed by the Chinese government for over half a century, and a writer who was ready to show it through her father’s eyes. In 1950—when the PLA had first invaded Tibet—Dorje was just 13 years old. The army still took him into its ranks.

By the mid-1960s, he had become a mid-level officer and then official photographer, documenting a campaign to purge Tibet of Buddhism, excess wealth, social hierarchy and rich Tibetan culture in the name of Mao’s version of Communism. While he later became allied with a faction that fell out of favor with the government, he remained in the army for years. 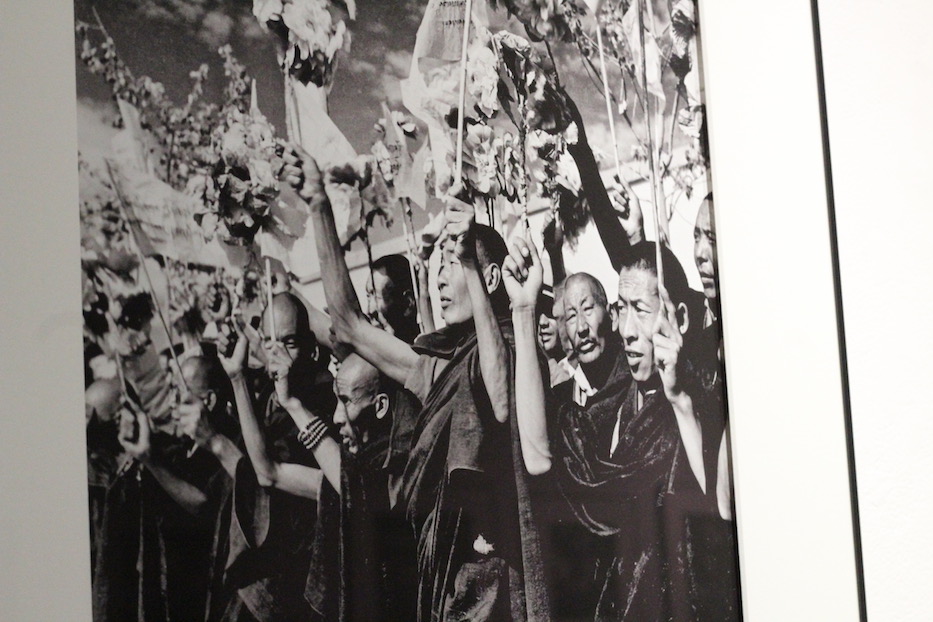 For Frucht, the images were a revelation. In part, he was drawn in because “it’s not totally clear what was private and what was official”—Dorje straddled documentary photography, straight up propaganda, photojournalism and fine art. Several of the photographs went beyond conventional propaganda to depict reeducation campaigns and brutal “struggle sessions,” in which monks, landlords, business owners and well-to-do renters were dragged out into the streets, made to “struggle” under the weight of their possessions and their faith.

In others, Frucht found himself drawn in by figures who didn’t quite seem politically converted, a rare glimpse into the widespread but largely unspoken malaise and ultimate ravages of the period. Through the photographs, Frucht felt that he could see Tibetans splitting into increasing factions, divided first by the Chinese government and then by each other.

“These weren’t just mobs going after each other,” he said in a recent interview at the gallery. “It was neighbors.”

Even after Yale University Press passed on the book (it is set to be published through Potomac Books, an imprint of the University of Nebraska, in April of next year) the images stayed with him. Last year, he began a push to bring them to the gallery, which ultimately included an Indegogo campaign over the summer before an installation this fall.

In the images, viewers come face-to-face with a history they have likely never seen before—although parts of it feel eerily familiar. In some, Dorje’s eye for propaganda is in full force: a WPA-era sensibility oozes from a print of an “emancipated serf,” whose whole body takes up the frame as he opens his mouth and triumphantly lifts his arm.

It’s a compelling image: the subject looks free and relieved, as if some great weight (perhaps that of material culture, it seems to suggest) has been lifted off of him. His sunhat frames his face like a halo. The outstretched arm, filling a corner of the frame, reflects images from Soviet Propaganda posters also from the 20th century. A label below the image explains that a pen, clipped just so to his pocket, is a status symbol. 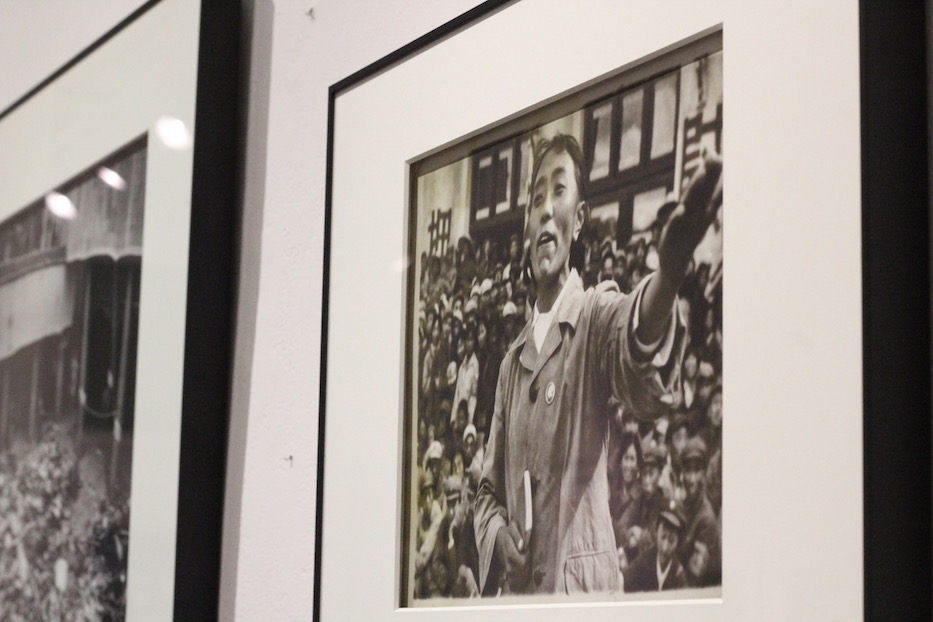 In another, the so-dubbed Tibetan red singer” Tseten Drolma steps forward, her left arm outstretched in a nearly perfect line. Her body is open to the camera, sharp before an out-of-focus crowd behind her. In her right hand, she clasps Mao’s now-infamous Little Red Book. As a label explains, she became known for her brand of music, Tibetan folk songs”rewritten to praise Chairman Mao or the Party.”

Others are hard to stomach as they expose viewers to the public humiliation and public spectacle of the period. In some, monasteries are destroyed, the damage surveyed. Military parades ride through the center of town with intense machismo and swerve. Children pose with copies of the Little Red Book that they are too poor to possibly read.

In a particularly heart wrenching image, Dorje has placed himself at the heart of a struggle session, his camera trained on the wife of Sampo Tsewang Rigdzin, part of a family of aristocrats. The camera is close enough to capture the laborious fold of her body to a 90-degree angle, eyes fixed in the ground beneath her, fingers curled around a tray she must not (but seems doomed to) drop.

As she leans forward, the viewer sees that she has been weighed down by not only her own jewelry and a tray of ritual objects, but also a large box that is revealed to be a bo—“a metal tub used to weigh barley,” as the label explains—fixed to her back with lengths of industrial rope. It’s anti-consumer, anti-wealth rhetoric taken to its most brutal, inconceivable, inhumane point—then carried out by Tibetan soldiers who look like kids, because they are. 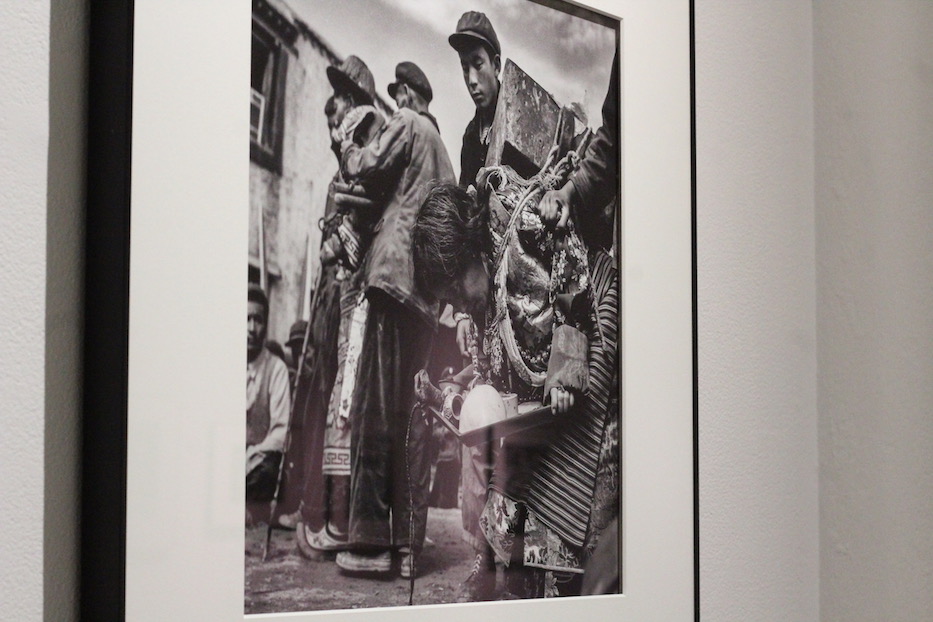 “For me, it’s a glimpse into this hidden time,” said Frucht. “I had only the most superficial knowledge of what the Cultural Revolution was … a lot of this is completely new to me.”

He expects that much of it will be new to viewers too. The photographs defy a solely documentary quality: they seem to breathe history right into the gallery as half-reminder, half-warning. Almost all of them contain a detail that makes one stop right in their tracks: a small palm with its fingers outstretched; a face that is twisted just so; a pair of eyes that wander off. In one, Dorje has captured a monk who looks straight into the camera as everyone around him waves on “the new, ‘autonomous’ government” in Lhasa.

He’s not down with the program, and his dubious stare suggests that viewers shouldn’t be either. A label explains that his ostensibly skepticism—or maybe it’s downright anxiety—was correct. Of thousands of temples and monasteries in the region, only eight remained by the 1970s.

“In so many of these, there really is a main character,” Frucht said. 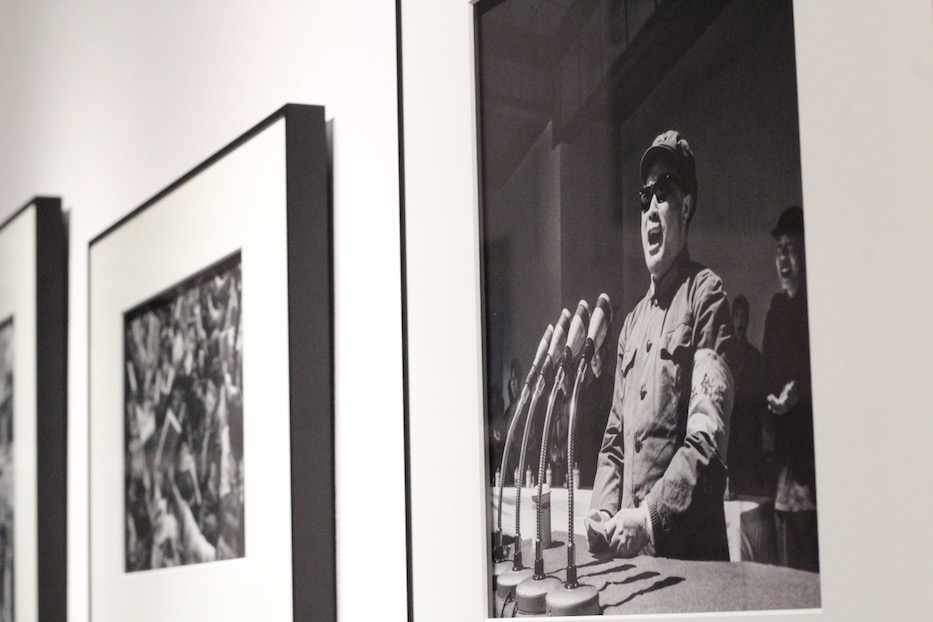 In another nearby, the photographer depicts Zhang Guohua, the Chinese general who led the invasion of Tibet in 1950. In the image, the general leans back just a little, head turned to the left as he makes an announcement. His body seems so sure of its place: hands clasped, veins popping. Sunglasses cover his eyes. Words fly from his open mouth; teeth glint in the light. Over his left shoulder, a subordinate officer laughs and applauds. Only a text beneath the image reveals that Zhang Guohua was ultimately removed by a rival faction. The subordinate officer took his place.

The images are self-conscious in this way, like Dorje knows he’s writing history (and indeed, he was ordered by the army to do so) without knowing how that history will end. While his life ended in 1991, his daughter has since returned to the region, tracking down many of the subjects. As memories of those years have become more distant, they have gone on to live vibrant and sometimes religious lives, their futures shifting as the past becomes, indeed, a forbidden memory for many of them.

It’s a history that has eerie parallels to the present. While Frucht is quick to say that the invasion of Tibet constituted a uniquely brutal attack on religion and culture, the images resonate decades later, as India’s government threatens to push out its Muslims, Europe warms to its far right, borders tighten as migration explodes, and Democracy faces massive structural challenges across the U.S. and across the globe.

Indeed, the photographs ask viewers what they can do differently in their own circles, to prevent the same hysteria, partisanship, infighting and violence that seem to repeat themselves every few years.

“I’m very interested in this phenomenon of political hysteria—when people find it suddenly sensible and necessary to to something that they would otherwise never do,” Frucht said, surrounded by the image. “The Cultural Revolution took a particularly Chinese, and in Tibet, a particularly Tibetan form.”

“But you can see some larger resonance, in those actions that we think of as beyond the pale that become justifiable.”

City Gallery is open Thursday to Sunday, 12 p.m. to 4 p.m. or by appointment. Find out more at their website.