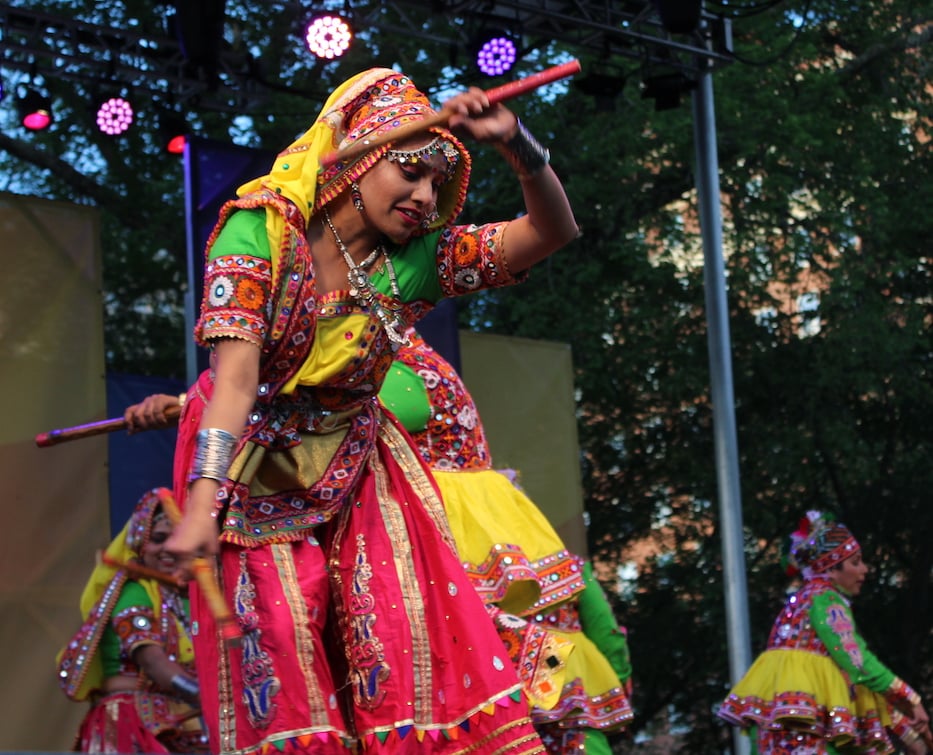 If you were around New Haven green this Sunday afternoon, you would've heard a hypnotizing duet of Gujarati music all the way to College Street.

Had you walked a little closer, you would've seen a massive group of festival goers dancing in front of the International Festival of Arts & Ideas main stage, tapping brightly decorated sticks in a choreographed circle for the community.

The activity was part of Garba360, a combination of live music from Kashyap Jani and Friends, Shrusti Performing Arts, instructor Heena Patel and the University of Connecticut’s nationally competing garba team ThundeRaas. Raas is typically danced with brightly colored sticks or dandiyas, and garba an intricate combination of hand and foot movements. 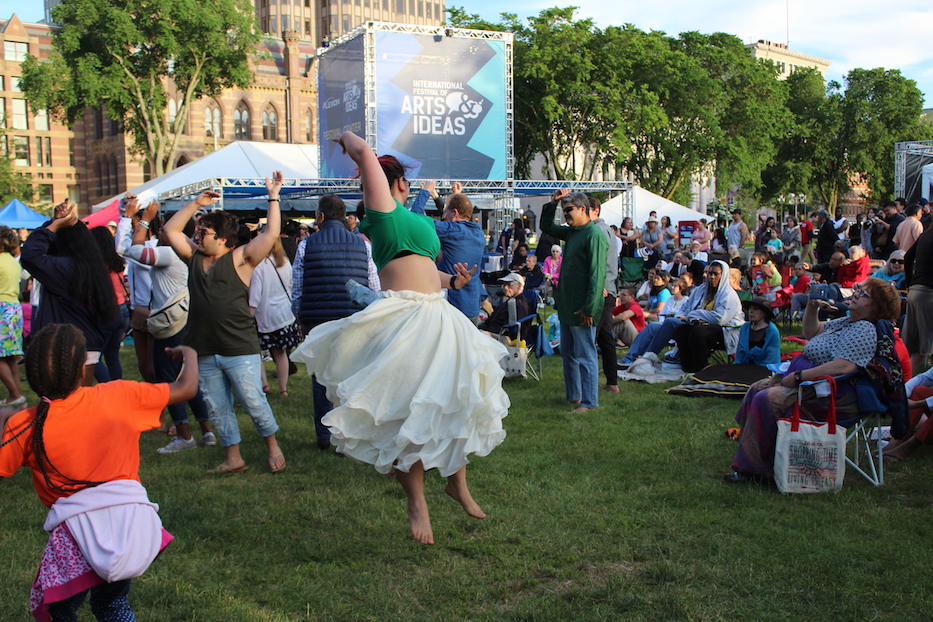 Some attendees seemed to have received the memo on what to wear from the Arts & Ideas website, which featured a short video of Patel suggesting people wear chaniya choli, a three-piece set that women typically wear to dance garba. It has a scarf like material that wraps around the bodice and tucks into a skirt. If they didn’t have one, she recommended wearing something comfortable and flowy.

That was no problem for 22-year-old Alice Valley, who made the trip from Guilford for the free session. A trained ballerina, Valley said she is interested in both dance and Victorian fashion, and showed up wearing a long white skirt.

As the music began, Valley spun midair, trying to break her habit of ballet spins for something more kinetic. Despite just graduating to pointe, Valley said she appreciates different dance environments because they allow her to try new styles. She said she sees the festival, in which her bike enthusiast dad is often fairly involved, as very worthwhile.

“This is perfect, nobody knows you,” she said. “You can dance and abandon if you look stupid.”

During the event, both facilitators and some attendees explained that raas and garba are popular in Gujarat, India, where they are danced as a part of a fall festival called Navaratri. In Gujarat, Navaratri is a nine-day Hindu religious dance festival that celebrates the divine feminie and different Hindu goddesses.

Seeing the dance on the Green excited Nikhil Patel, a Branford resident and cancer researcher who attended the festival with his family. He said that both dances can be found during the annual festival, a nine-day festival that commemorates the battle between the goddess Durga and demon Mahishasura.

“She killed the devil on the tenth day,” he said. He added that it symbolises the triumph of good over evil, by winning one over the devil. 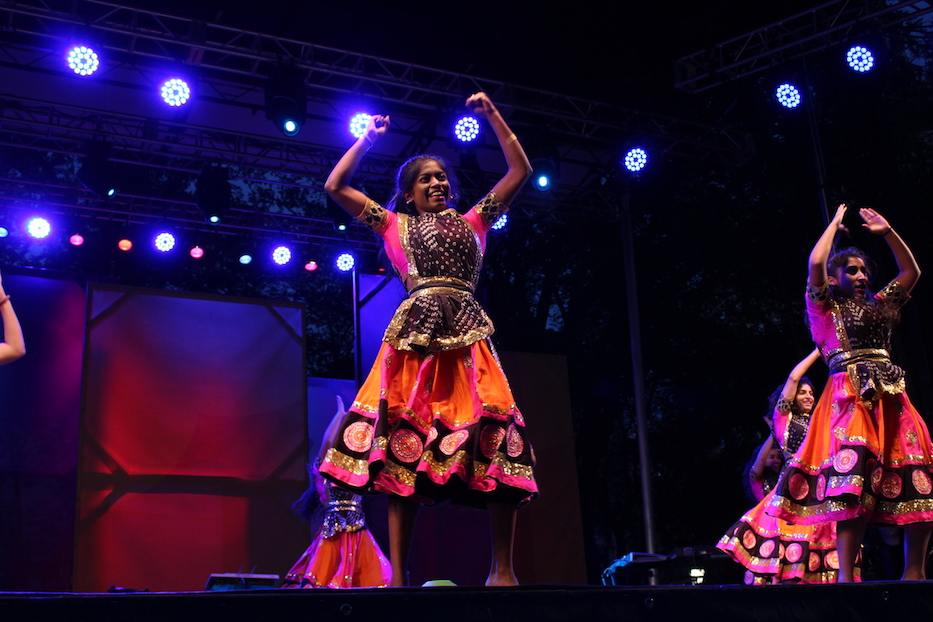 Heena Patel gave more context as she led attendees in dance tutorials. For the first nine days of Navaratri, festival-goers feast, reconnect with family and dance. She said that in the 21st century, dances take place outside, inside and even in the basement of apartment buildings. Born and raised on garba as a kid in Toronto, she added that she’s performed in gymnasiums, community centers and temples. She’s since taken the dance internationally.

Heena Patel now spends her year split between New Jersey and India producing international performances. She said she loves bringing her most-loved dance form outside of fall celebrations or weddings. As a curator, she collaborates with local performing artists, musicians and dancers, many of whom also have full time jobs outside of their performing careers. She called it a way to showcase talent within the diaspora. 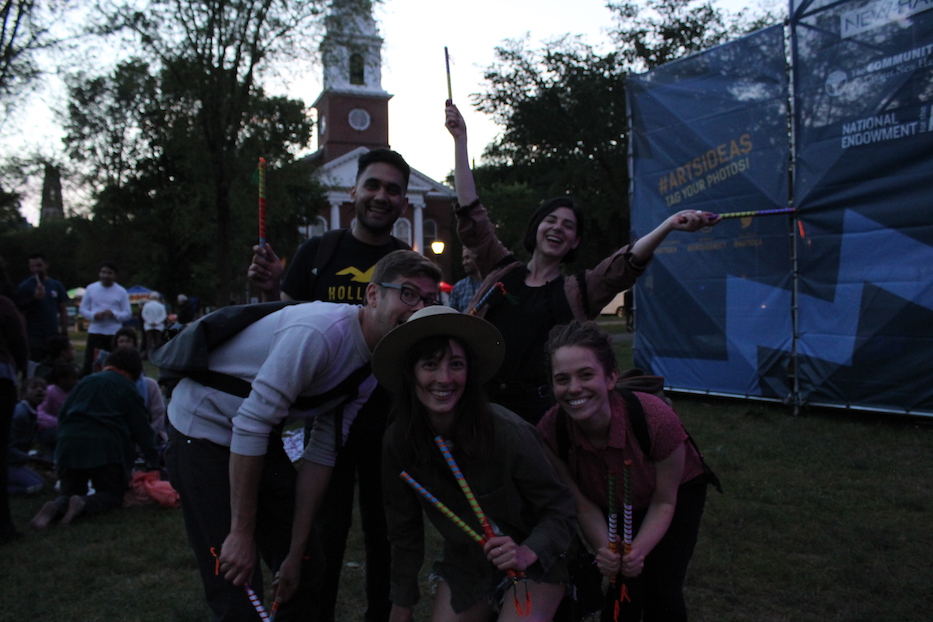 And Sunday afternoon, she and Garba360 greeted over 100 attendees with that same excitement. As groups took the stage, a few festival-goers cleared out space where they had laid down blankets and camping chairs just hours before. She instructed them to form a huge community circle.

“I heard people in New Haven like to dance,” she said to the crowd, with a headset mic.