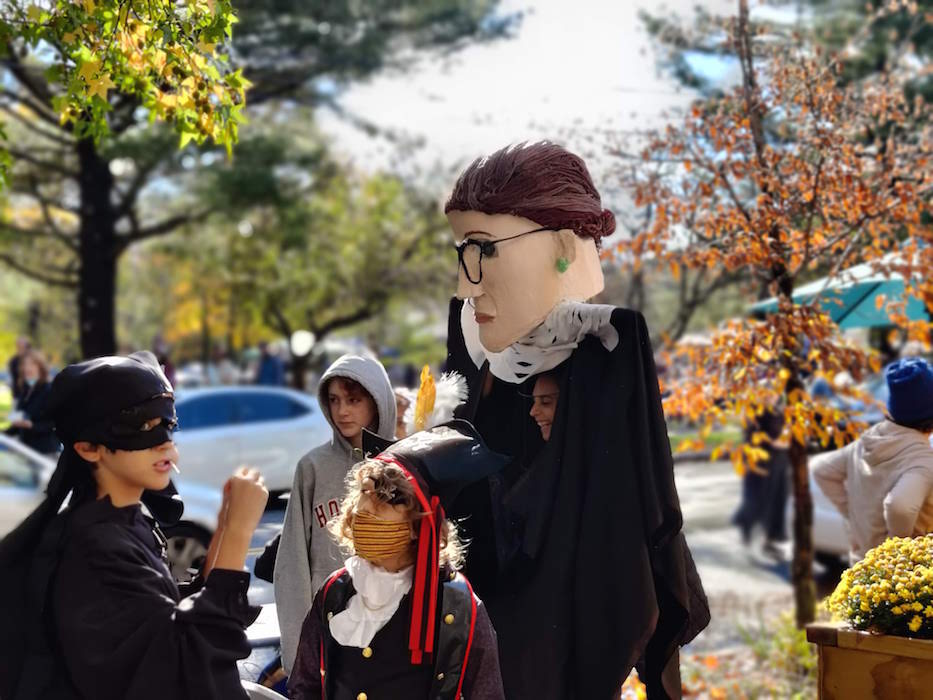 At 10:30 Sunday morning, a lone ship appeared outside of Manjares’s front-facing windows. Propped in between a tree’s branches and captained by a figure in red, it boasted six gunports and a mermaid figurehead. Just above it was a chipmunk, all purple and papier-mâché. The ship caught the breeze in its newspaper sails.  Sun shone through golden trees and glinted off the tops of canopy tents in Edgewood Park

At 10:45, a four-foot-tall pirate rounded the corner of West Rock Avenue, followed by a zombie doctor, and finally by a vampire. They stopped in front of Manjares, next to the ship, and adjusted each other’s costumes.

This was Westville’s annual Giant Puppet and People Making Mayhem Parade, back as an in-person event after a socially distanced car parade last year.  Sunday, the parade stepped off from in front of Manjares, and then continued festivities in Edgewood Park across the street. Dozens attended. 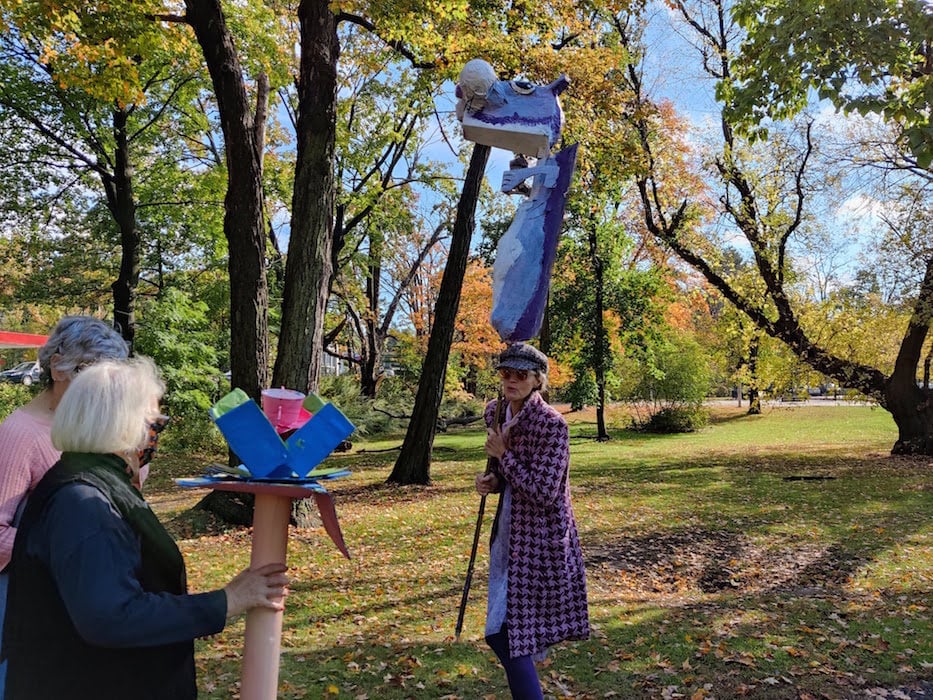 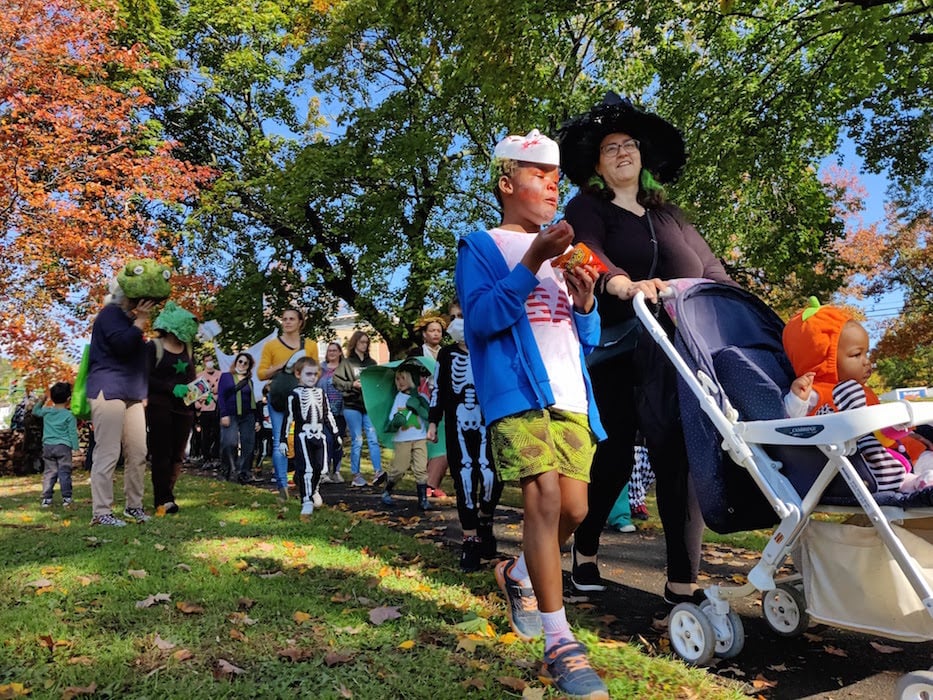 “This parade is a great community bonding activity,” said longtime Westvillian and art teacher Muffy Pendergast, who launched the parade in New Haven over 12 years ago. “It’s not like everyone makes their puppets in isolation. They get together with family or friends to work on their puppets together, or they all put their talents together to create one puppet to work on together through the preparation season.”

Preparation for the sun-soaked parade began well before Halloween, which this year fell on the day of the march. As early as October 3, Westville Village Renaissance Alliance (WRVA) provided puppet-building materials such as bamboo poles, balloons, cardboard, and masking tape  for neighbors to pick up and take home. Residents used these materials to “pre-build” puppets in their homes before they gathered together again at Westville’s Central Patio for “Paper Mache Weekend,” where papier-mâché materials were made available for parade participants in late October.

Before the parade began, a line filled with ghouls and marvel supervillains formed on the sidewalk in front of Manjares. It was about a block and a half long, stretching back onto Whalley Avenue. At 11:00 a.m., two trumpeters blared their instruments, signaling the beginning of the parade march. Onlookers cheered, waved, and snapped pictures of the procession as it left, eagerly awaiting the parade’s return to Edgewood Park. 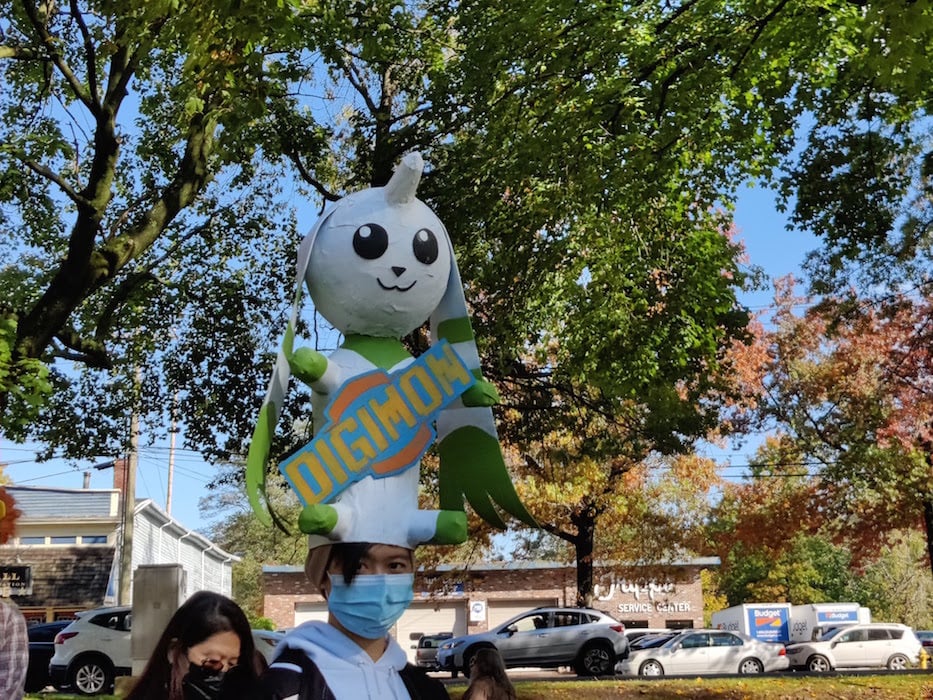 Top: Jaime Kane as a witch.

In the meantime, some onlookers moved into the park's weekly CitySeed Farmers’ Market; others enjoyed neighborly chats with their fellow residents. In the park, a toddler offered her plush, stuffed toy to a friendly-looking dog.

Though 12 years in the making, the parade boasted several new participants this year. Last year, newly minted Westvillian Katie Lancaster missed the car parade, held during the pandemic’s second wave. This year, she learned about it through an email blast from WVRA.

“I think last year they did the parade in the back of trucks driving around the village,” Lancaster said. “But my family and I didn’t really get out of the house at all that year. With a 19-month-old, there aren’t many events where my family and I can just go out together.”

In the background, the trumpets of the processions sounded again. “It’s nice.” 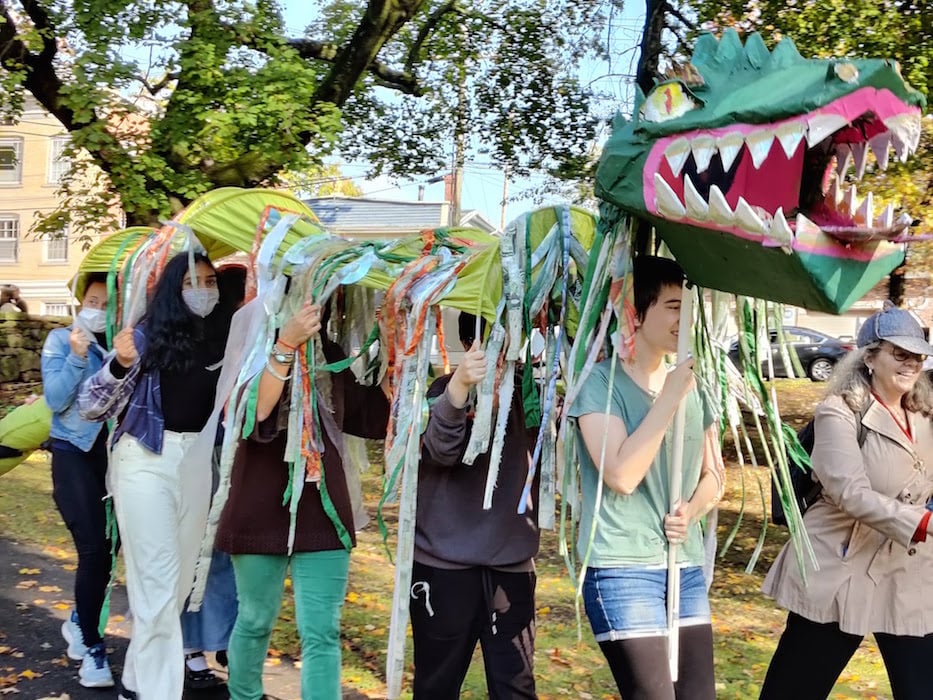 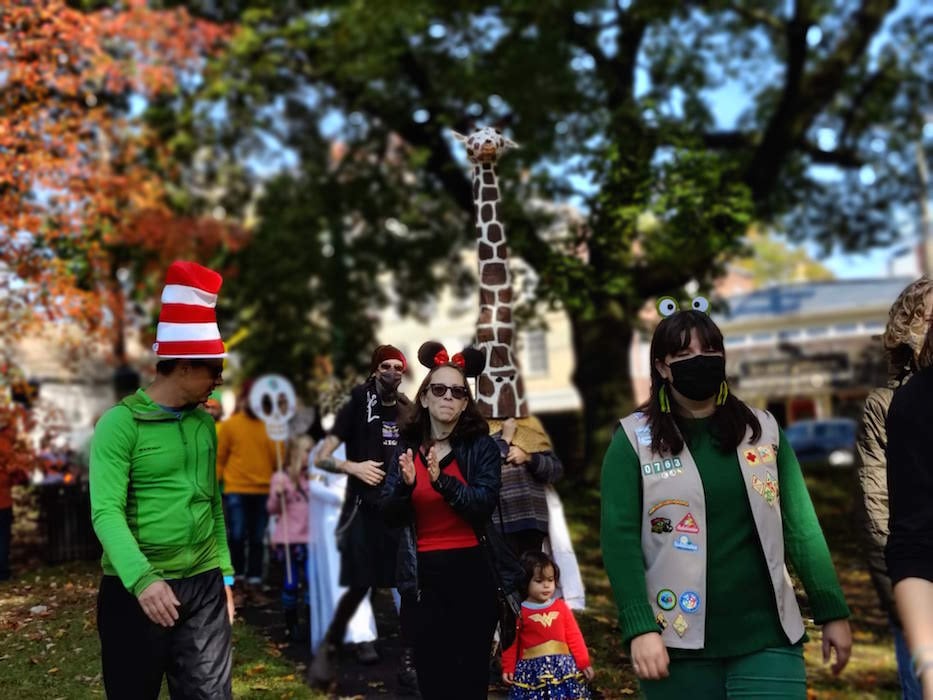 Top: A fearsome dragon makes its entry into the park. Bottom: Parade goers get festive.

“I didn’t know this parade was a thing,” Weser said, adjusting her tail. She was dressed in a handmade Cheshire cat onesie, complete with a tail, ears, and a mask that held the Cheshire cat’s trademark toothy grin. “But it reminds me of home. I’m from Santa Fe—the arts scene there is lively, too.”

A giraffe reared its head and cut diagonally through the center of Edgewood Park to the park’s pavilion. One might have missed that just ahead of the giraffe, Minnie Mouse, clapping along to the trumpeters’ songs, chaperoned Wonder Woman, who was less the half of Minnie Mouse’s height. 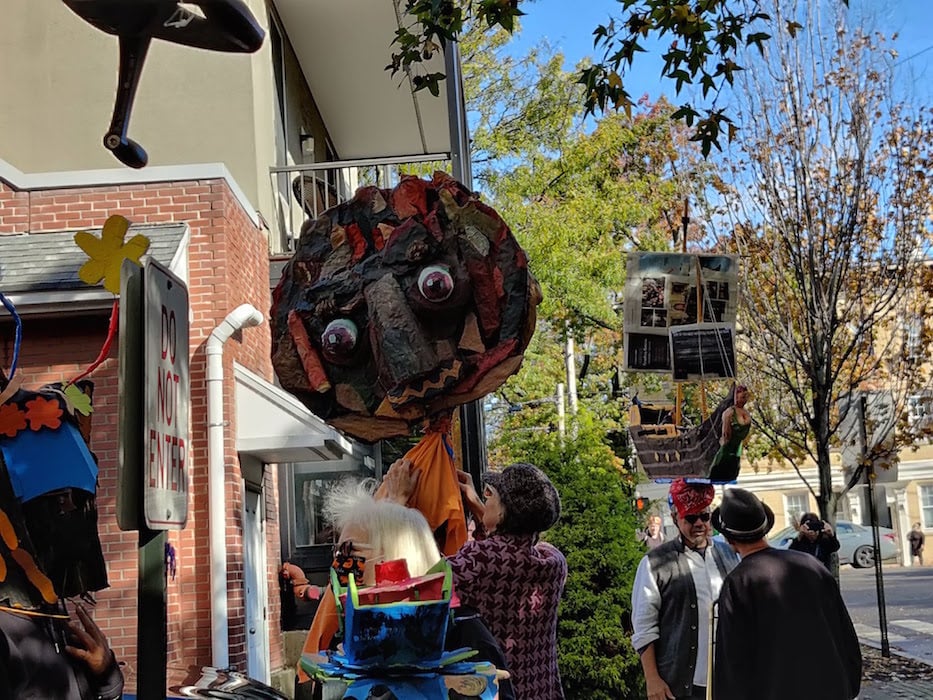 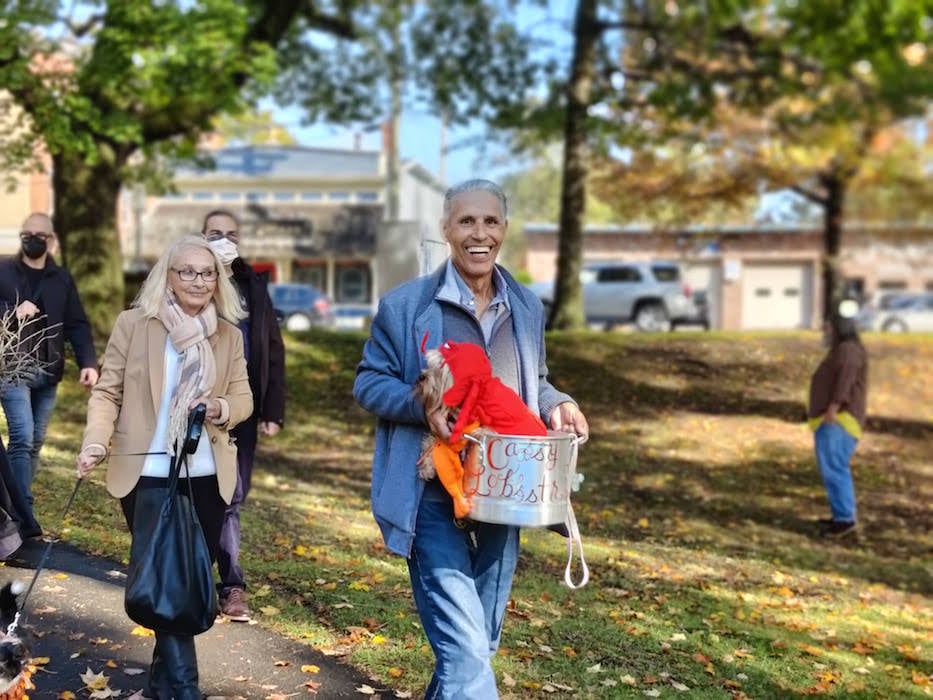 Behind them, past one of a few pirates and a Whoville citizen, a bright green dragon bared its razor-sharp paper teeth. Slit-eyed, it stared at the purple chipmunk, who had broken from the procession into the open green of the park to twirl in a dance. The chipmunk’s maker, Pendergast, laughed.

One Westville resident dressed his dog up as a lobster in a pot. Another fashioned their baby in a pumpkin costume, and pushed her pumpkin-baby in a stroller through the parade. Another, much older pumpkin followed his companion, dressed in a skeleton mask, in the procession. An engineering student’s Digimon sat atop their head. 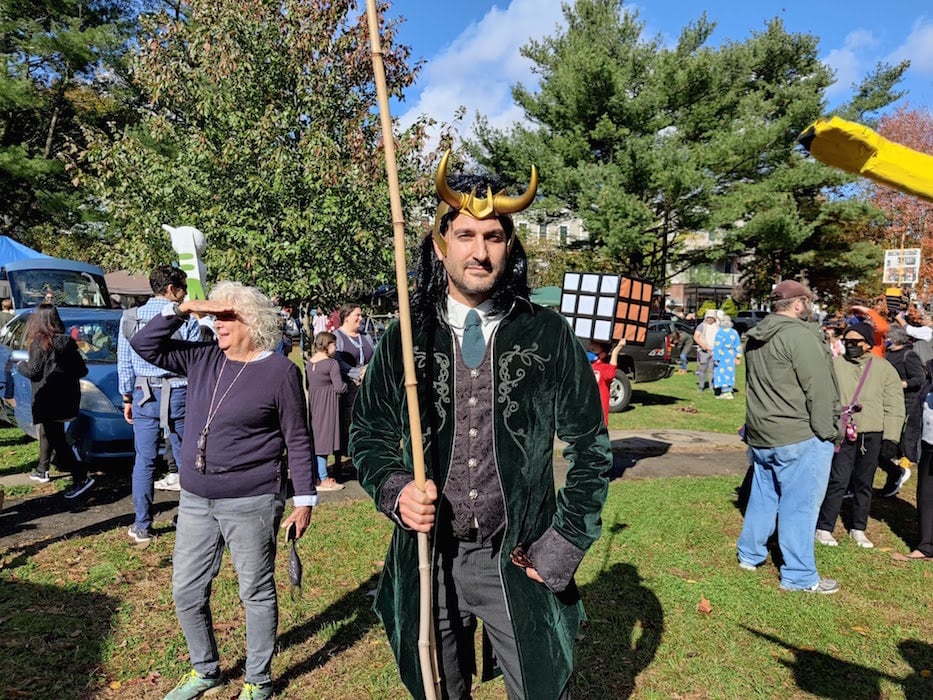 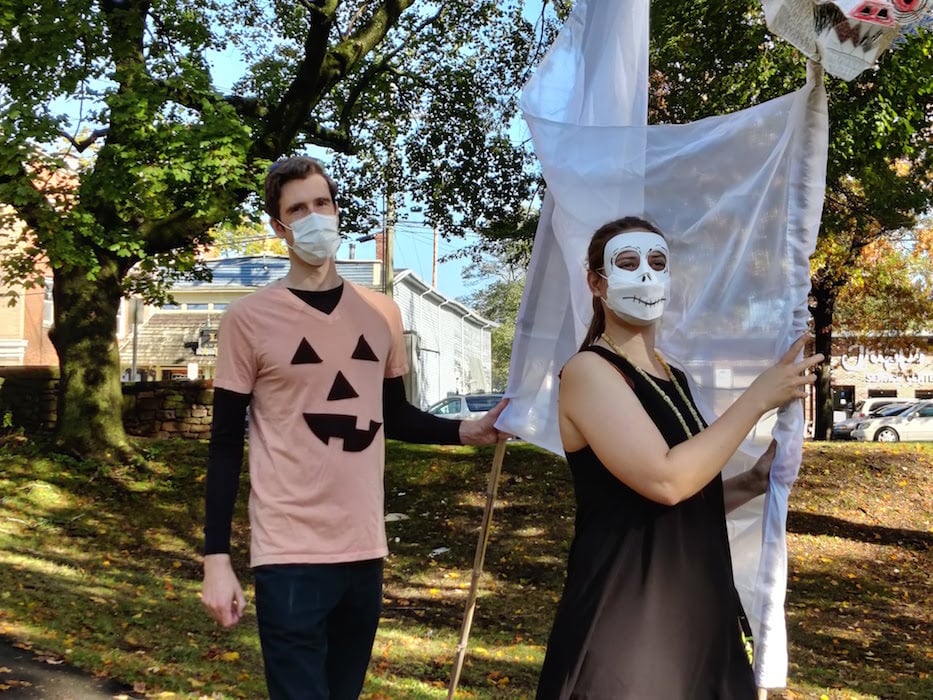 Dr. Nicholas Perrone, principal of Edgewood School, came to the Giant Puppet and People Making Mayhem Parade as Loki, Marvel's God of Mischief. His wife, Kara Perrone, was dressed as another version of Loki. Their daughter was Captain Marvel.

“What a great day, right?” Perrone gestured to the sunlight and warm air that graced the end of October. He took in the crowd of families that gathered together, talking to neighbors, taking pictures with costumed strangers, dancing to the live music. To him, this sight meant that the parade was “just about back to normal” from last year’s Covid-19 rendition. 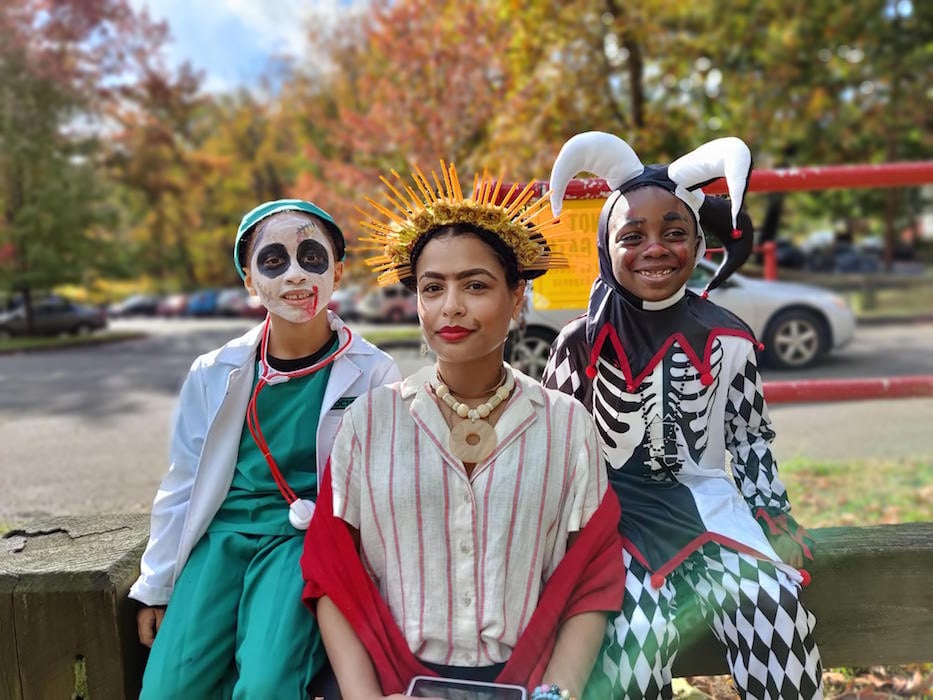 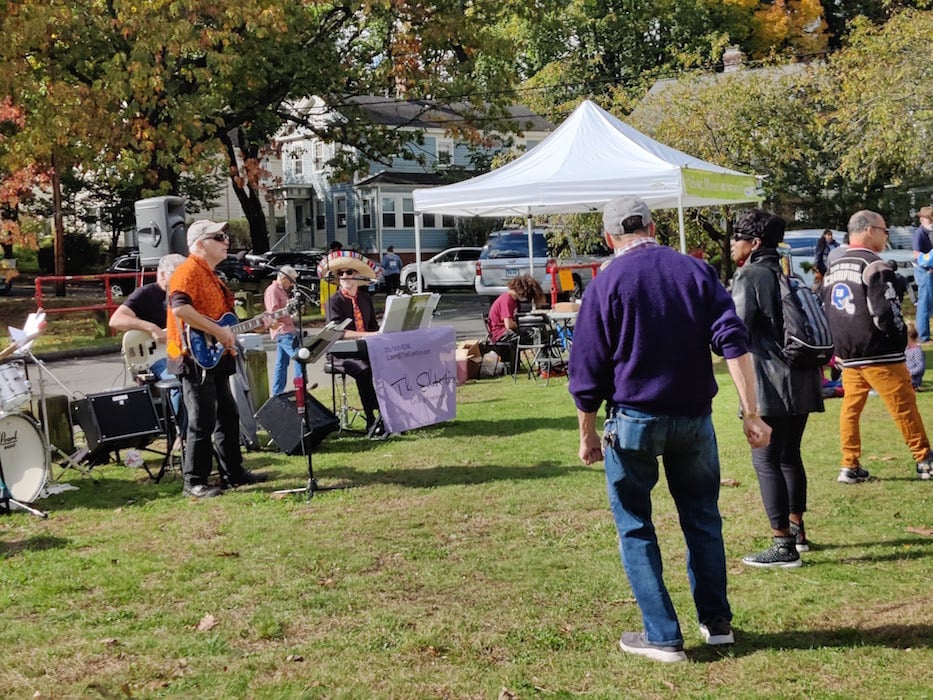 Melina Oliver dressed exquisitely as Mexican painter Frida Kahlo. Her costume was a mix of clothing she already owned and pants that her grandmother sowed for the occasion. She sat to the side of the Farmers’ Market with a zombie doctor and clown, Madison McMillan and Mason Cherry, respectively.

“I chose to be Frida because she is a legendary Chicana woman, but also because I didn’t think I could pull of Selena,” she said. This was the first time they all attended the parade. Oliver added that they came out to have fun together.

In front of the live band, Rich Kramer approached the patch of green reserved for dancing. He was beaming.

“This whole day has been great,” he said. “We deserve a good dance after the past year.” He rotated his torso to the beat of Bobby Pickett’s “Monster Mash,” occasionally circling around, singing along to the music. A witch joined him.