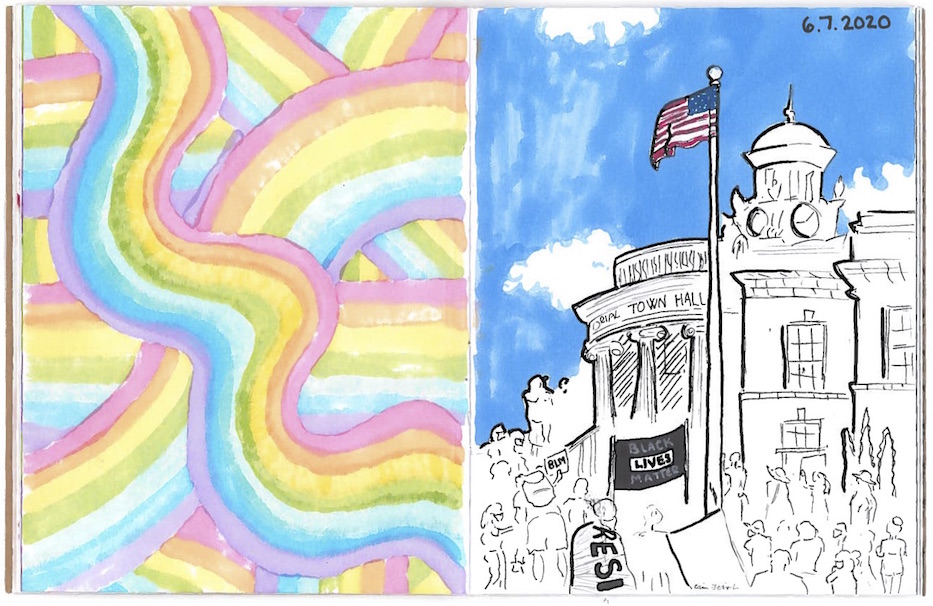 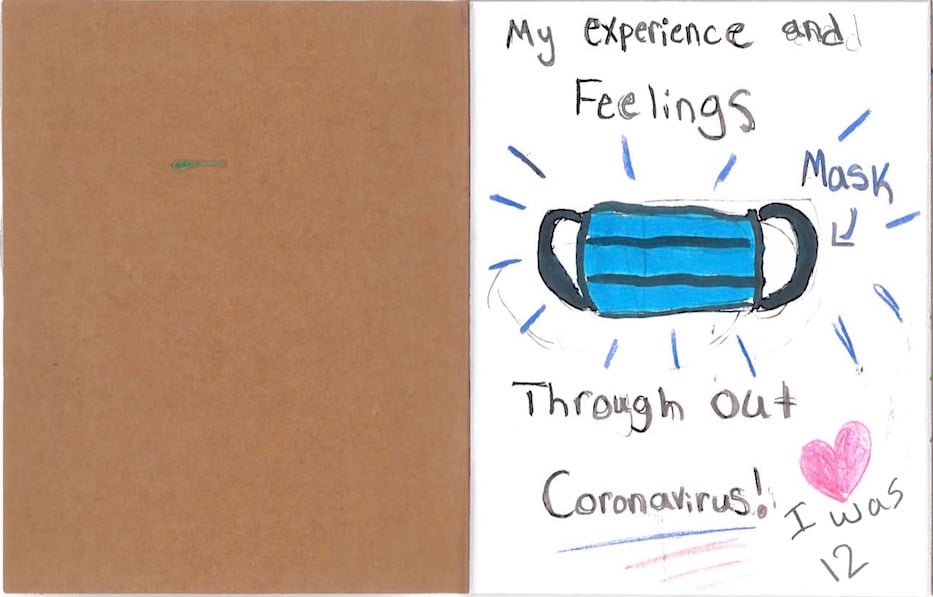 The pages are a time capsule, transporting a reader back to the early days of the pandemic. In her first entry, 12-year-old Saige Scalzo draws a blue and grey striped mask, its ear loops soft and wide. She and her friends make up a song to remember not to touch their faces. In May, she discovers the sitcom Friends and her dad is painting her room blue.

A large, yellow paintbrush occupies half a page. The entries stop for almost a month, and then restart with the news of a socially distanced graduation, new babies, friends’ dogs, and a parent’s recent unemployment.

Saige’s record is one of dozens in the Hamden Historic Sketchbook Project, an initiative from the Hamden Department of Arts and Culture and the Hamden Public Library to create a visual archive from the first months of the Covid-19 pandemic. Inspired by the long-running, Brooklyn-based Sketchbook Project, the project currently includes 30 digitized sketchbooks from Hamden artists of all ages. It is the brainchild of Alisha Martindale, arts and marketing manager for the Hamden Department of Arts and Culture.

“I thought it would be a really neat, accessible thing to bring to Hamden,” she said in a phone call Tuesday afternoon. “And before last year, I just didn't have the moment to do it. When the pandemic started, we were thinking, how can we encourage people to use the arts? How are people using the arts now? That's when I pulled in the library.” 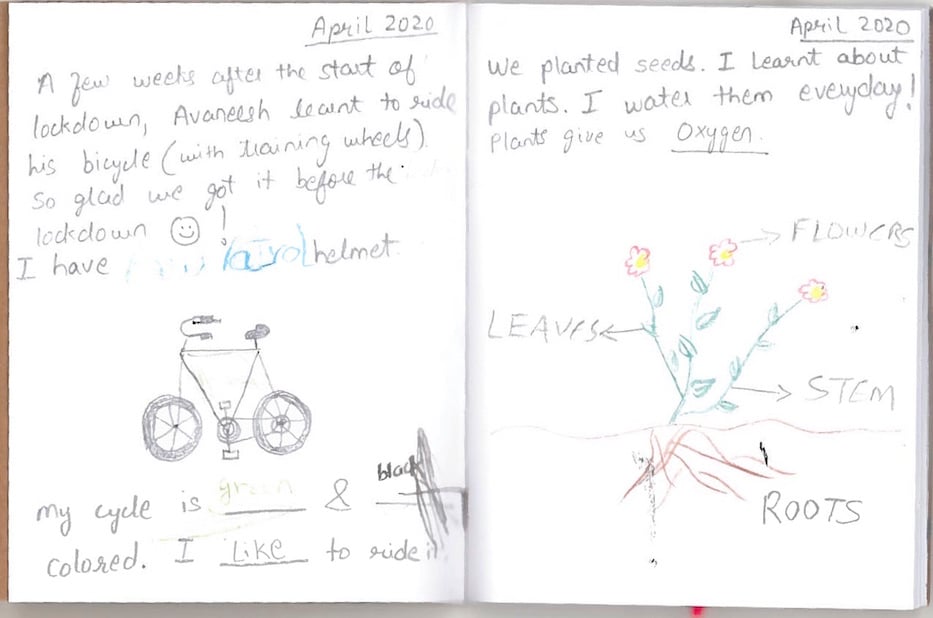 The project is a simple one, given grit and depth by the participating artists. In April of last year, the library offered small, blank sketchbooks to any Hamdenite who wanted one. Once artists received them, the clock started: they had until August 1, 2020 to finish and return them to the library (some artists pushed that return date back; others held on to their sketchbooks). The collection has since been digitized, and is also available for viewing at the main branch on Dixwell Avenue.

In the collection, artists chronicle their personal lives in detail, but also bear witness to the very human, day-to-day scale of a global tragedy. In graphite pencil, marker, watercolor, pen, and mixed material, they document toilet paper and PPE shortages, Netflix binges, upended sleep schedules, remote school, job loss, and personal grief. There is delight too—68-year-old William McCarthy sketches the trees and landscapes that populate Hamden. Three-year-old Avaneesh Thorat writes about learning to ride a bicycle for the first time, and a reader can feel their whole chest contract with joy.

There is a relatable nature to them from the first through the final sketchbook. In a series of written and illustrated schedules, artists try to control time as it becomes bendable and amorphous before their eyes. One writer snuggles with her 6-year-old at 8 a.m. and works around her kids’ schedules, with a mandatory chocolate break at 2 p.m. Another documents the passage of days in takeout containers and half-eaten pizza, a 2020 version of T.S. Eliot’s coffee spoons if there ever was one. 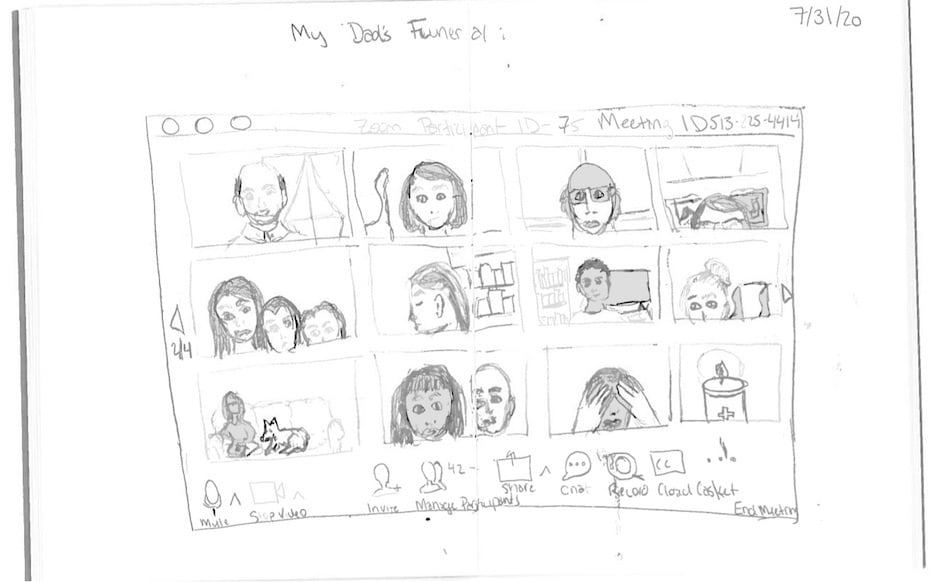 A page from Jennifer Sacco's sketchbook documents her dad's funeral over Zoom.

Some are bitterly funny—32-year-old Erin Ferich reminds readers that the show Tiger King happened—and others may leave their readers reeling. On July 31, an entry from Quinnipiac University Professor Jennifer Sacco chronicles her dad’s funeral, held over Zoom in a strange, two-dimensional ritual that may now be familiar to many readers. It’s a reminder—one of many—that the physical isolation of Covid-19 has gone on much longer than many thought it would.

“People are suffering everywhere, from want, from loneliness, from boredom, from captivity, from fear, from anxiety, from disappointment,” Sacco wrote in her final entry, dated August 1 of last year. “Hopefully they’ll remember their feelings of need and emerge to create a more just and compassionate society.”

The sketchbooks also document local responses to the parallel pandemic of white supremacy and anti-Black racism, including protests in Hamden and across the state last summer. One week after the state-sanctioned murder of George Floyd in early June, several sketchbooks include a Hamden-based protest that shut down the Wilbur Cross Parkway. In an image from Ferich, its beginnings are richly illustrated, a Black Lives Matter banner pulled against the stark white of Hamden Town Hall and an electric blue sky. A crowd of bodies fills the frame. 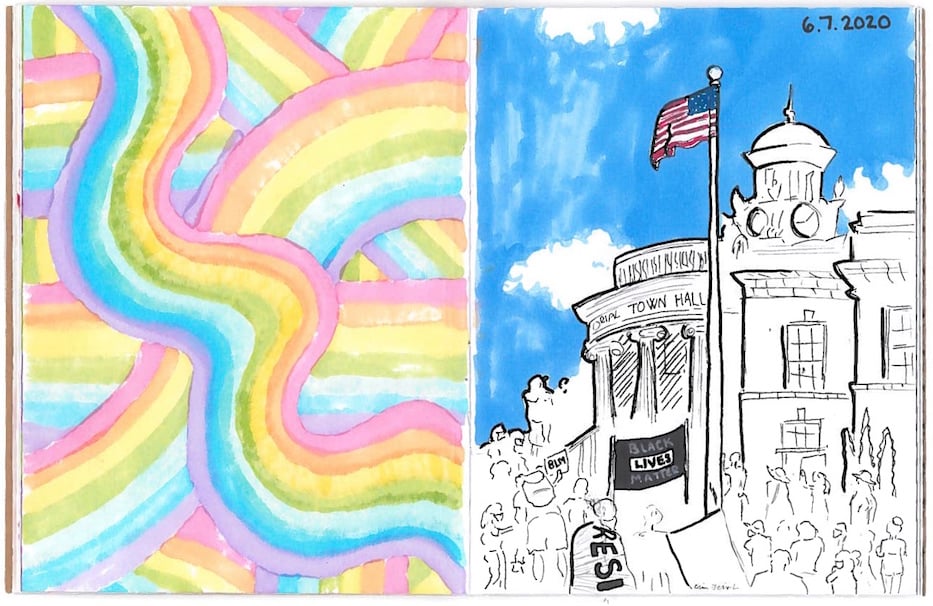 In another snapshot from the day, 52-year-old Sheri Schwarz includes a grayscale photo of bodies filling the highway, with the caption that she is proud of her kids for marching. Other artists simply allude to it, with a bolded mention of the Black Lives Matter movement that suddenly appears around June.

Together, these artists remind readers of the rite of—and right to—both personal grief and collective memory.  Martindale said she is already thinking about how to bring the project back for a second round as vaccines, double masks, and hybrid school define a second year of the pandemic.

“It's just a record of their daily lives throughout,” she said. “Some sketchbooks were used just as a way to forget about all that was happening. Some went right into it. It’s just a way for people to record what was actually happening in an artistic, creative way, and also for the community to get an in-depth glimpse at what everybody else was going through.”