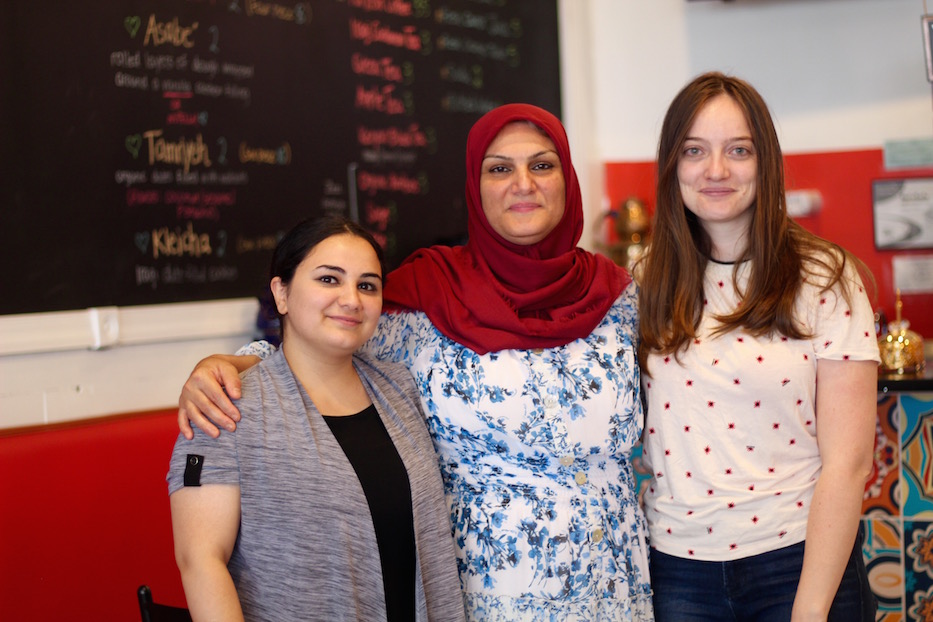 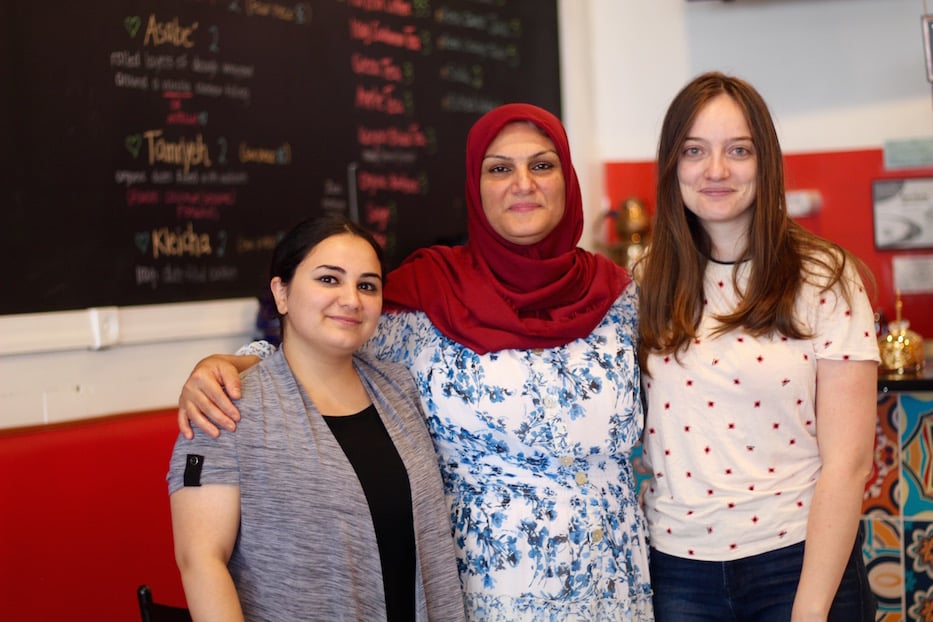 In the Baghdad Bowl, Nieda Abbas channels the flavors of her first home country with curried chicken, rice, peas, carrots and almonds sliced whisper thin. In the Sakarya Bowl, she adds roasted beef meatballs, a fragrant tomato sauce, and a lemony, green tabbouleh from her years as a refugee in Turkey. When she rolls the egg and potato wrap tight, she remembers what it was like when her children were small, and wanted something warm and comforting to eat.

The co-founder and head chef of Havenly, Abbas is telling her own story of migration one dish at a time in a new menu with food from Iraq, Syria, Turkey and New Haven. All of those have become stops on her own journey to the U.S., which began in Baghdad, Iraq decades ago. For Abbas, who has worked as a chef in four countries, it is a way to teach cultural understanding through cuisine.

Havenly’s fellows—women refugee chefs from across the globe—learn to prepare and serve the dishes as part of their training. All of the proceeds from food go directly back into the nonprofit.

“We wanted to make it better and also teach people about Arab cuisine,” she said in an interview with the Arts Paper earlier this month, speaking in Arabic as Havenly Co-founder and Executive Director Caterina Passoni translated. “Through our food, we can give them more information about the tastes, the quality. This menu is the story of my life. This menu is me, and every place is a place I was.” 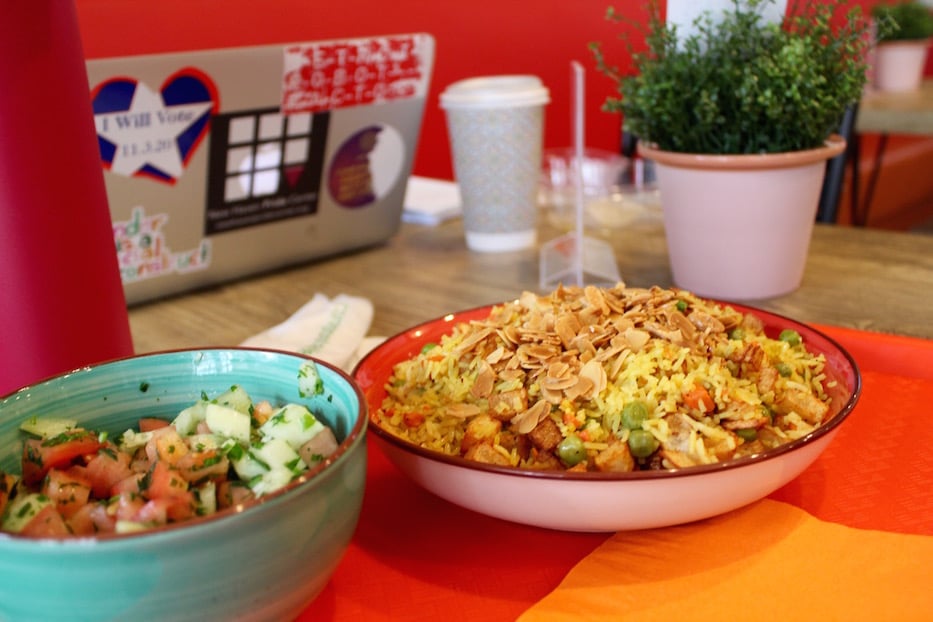 The New Haven Bowl (طبق نيو هافن), served with a side salad of parsley, chopped tomatoes and cucumbers. It is, in this reporter's estimation, savory and perfectly spiced, with a satisfying crunch from the almonds. Lucy Gellman Photo.

The story behind the new menu—which has kept Havenly favorites like its chicken and falafel wraps, date bites, and honey-kissed, flaky baklava that is somehow also vegan—began earlier this year. In the organization’s Tempe Street storefront, Abbas noticed that customers weren’t always sure of what to order and how to pair different menu items. It came, she guessed, from an unfamiliarity with the food.

For instance, she said, people ordered mujaddara with hummus—both of which are made with beans (mujaddara is made with lentils, rice or cracked wheat, and crisped onions while hummus is made with chickpeas). A more traditional pairing might be mujaddara with the cucumber-yogurt sauce called tzatziki.

Or customers asked for sides of amba, a pickled, fermented mango sauce that Abbas learned to make in her native Iraq. Normally, amba goes with falafel, but customers often ordered it by itself, to eat on its own. With a laugh, Passoni said it was like watching a person order salsa at a Mexican restaurant and eat it straight from the dish with a spoon. There’s nothing wrong with that, she quickly added—but Abbas didn’t think customers were having the optimal culinary experience.

“I want people, their bodies to feel better when they eat the food,” Abbas said. “So I want it to be a full meal, with vitamins, with protein, with all the components of a full meal.”

The result is a menu that both tells Abbas’ multi-part story as a refugee, and reflects a consumer base downtown for which she has had to adapt and experiment. From the beginning of her life in Iraq, Abbas was cooking—first with and for her family and siblings, and later for her own children. She hasn’t stopped since. 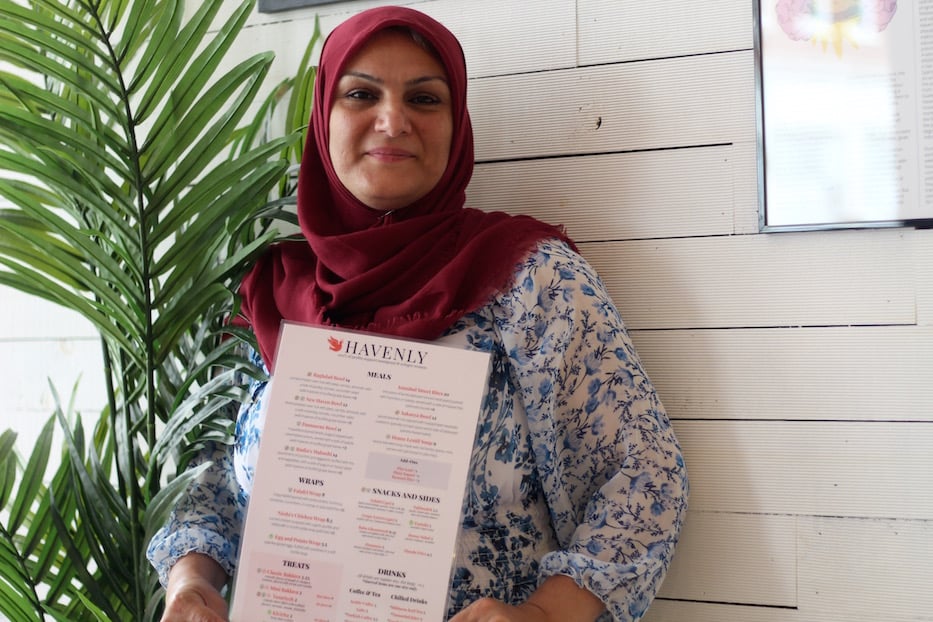 The menu reads like a fragrant, well-seasoned personal geography. From her time living in Damascus, Abbas has included a bowl with mujaddara (the Syrian take on the dish uses bulgur), caramelized onions, and tzatziki. When her family’s life was upended a second time by the Syrian Civil War (read about that here) and they fled to Turkey, she learned to make savory beef meatballs that absorb the spiced, tangy tomato sauce they are bathed in. She explained that they are not the same as kofta, although some of Havenly’s fellows refer to them by the same name.

Tender gestures to her family are everywhere. A toasty, paprika-spiced wrap with fluffed eggs and warm, soft potatoes is a throwback to when Abbas’ kids were young, and wanted something simple and savory to eat. On the sweeter side, there are Tamriyeh—sesame, coconut, and pistachio-rolled date balls filled with chopped walnuts and bursting with sweetness. Abbas started making them for her growing family years ago, and kept them on the menu as they caught on in New Haven.

In a section dedicated to full meals, “Radia’s Mahashi” pays homage to her mom, from whom she learned to cook an assortment of dishes as a kid. Every time she makes the dish, stuffing zucchini and eggplant with tomato-kissed rice and finely chopped vegetables, “I think of my mom,” Abbas said. At Havenly, it is served with either yogurt or a salad, and the option to add grape leaves. In addition, there are several vegetarian- and omnivore-friendly bowls, date cookies, and fragrant, Arabic coffee with cardamom always waiting behind the counter. 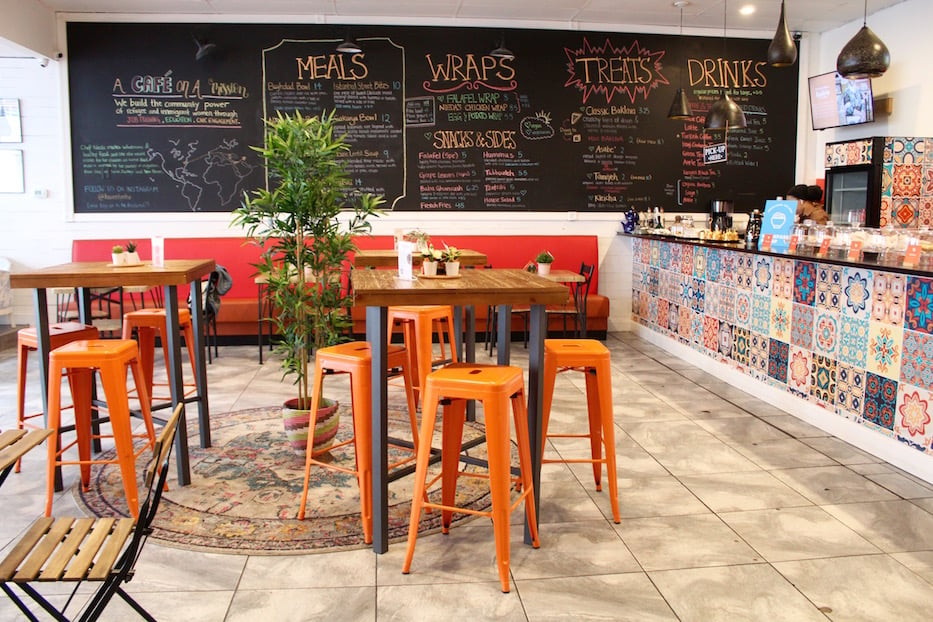 As she worked on the menu, Abbas also tweaked recipes based on a demand for more vegan, vegetarian, dairy-free and gluten-free options downtown (“I feel like the majority of Americans are vegetarian!” she exclaimed with a deep, ringing laugh that echoed through the cafe). The storefront added oat milk. It made its baklava vegan. In dishes that normally called for beef and chicken, she made options with potatoes and vegetables.

As Havenly’s fellows learn to make the recipes, she said, she began to see it as a kind of art form. She still does. In the kitchen, there is constant chatter about recipes, picky kids, and possible substitutions (spinach for chicken, for instance, was a recent one).

“We’ll hear like, ‘Oh I made it for my kids or my husband was so happy that I brought this new thing home,’” Passoni said. “Even sometimes, the fellows will like, make or bring food to the kitchen. And it’s really fun.”

Both Abbas and Passoni added that they want customers to understand that the menu comes from all of Abbas’ experiences—and from a belief that there is no one correct way to make a biryani, a falafel wrap, a plate of tabbouleh or a dish of hummus. When Havenly opened its storefront to order-in service last year (initially, it offered take out only because of the pandemic), customers would read through the menu, and then insist something wasn’t right. Passoni challenged that notion, looking to the nuances of each dish.

“I think, at Havenly, we don’t really believe that it’s one culture and one cuisine,” she said. “We’re really trying to show, like, different countries will mix and different cuisines will mix. It’s not just like ‘Oh, if you’re from Iraq, you have to make your traditional Iraqi food.’” 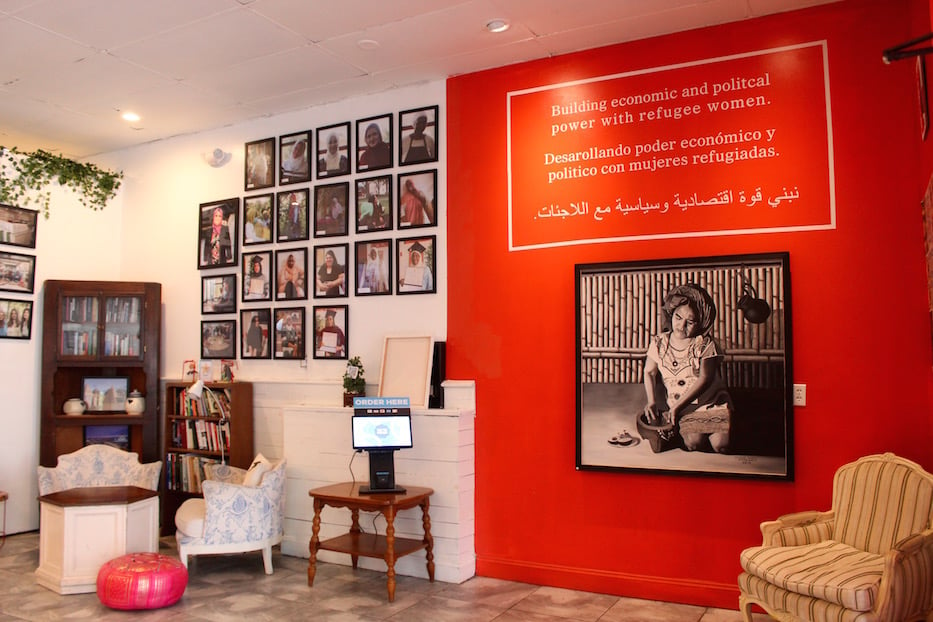 “This is unique and special,” chimed in Dina Tareq, Abbas’ daughter and the communications and sales director at Havenly. “Everywhere else you go, you won’t see a menu like this. These are places where we lived. It’s a special menu that we wanted to have.”

It comes in a two-year period of change and expansion for the organization, which grew out of a friendship forged in Integrated Refugee and Immigrant Services’ (IRIS) “Cultural Companions” program several years ago. From small batches of baklava in an incubator kitchen, Havenly has expanded to a brick-and-mortar storefront, training program and full menu. This month, Passoni is also taking a step back from the organization, so she can attend graduate school in Sussex, England.

The cafe and the organization, she said, are ready for that transition. In May 2020, Abbas and Passoni moved into a shuttered storefront on Court Street, where Sweet Mary’s had closed up shop. Later that year, they moved into their current space at 25 Temple Street with a takeout-only model. Then in spring 2021, they opened their cafe, a sunny, large open space decorated with red and orange paint, matching stools, a mosaic of tiles along the countertop and a large chalkboard menu.

Meanwhile, the organization expanded its fellowship program, which does business training, English classes, hands-on food prep, and mental health and wellness activities with women who are refugees from Sudan, Syria, Afghanistan, and South and Central America among other countries. Some of its current and former fellows have also become advocates for more secure and stable housing in the city as part of a new "Sisters In Diaspora" collective. On a recent Thursday, the kitchen bustled with activity, as a cohort of 15 fellows cooked their way through the afternoon. 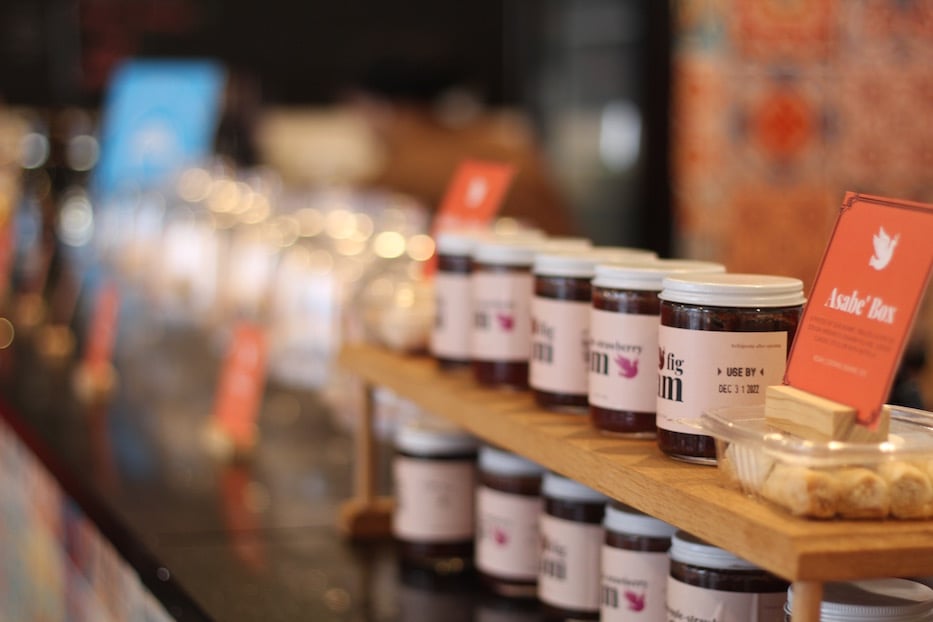 Jam is another fairly new item that meets customers at the counter.

Abbas said that food has become their shared language: women talk about and exchange their personal histories as they cook. She sees the menu, which trains fellows to work on standardized recipes, as an extension of that language.

“Sometimes I think coming to Havenly is a bit of a strange experience, because it is a training program,” she added. “Maybe someone at the counter won’t know exactly [what to do]. It takes a little bit. But I think we’re creating a space where you can support us, and where you can also have amazing food.”

Learn more about Havenly at its website. Order directly here.