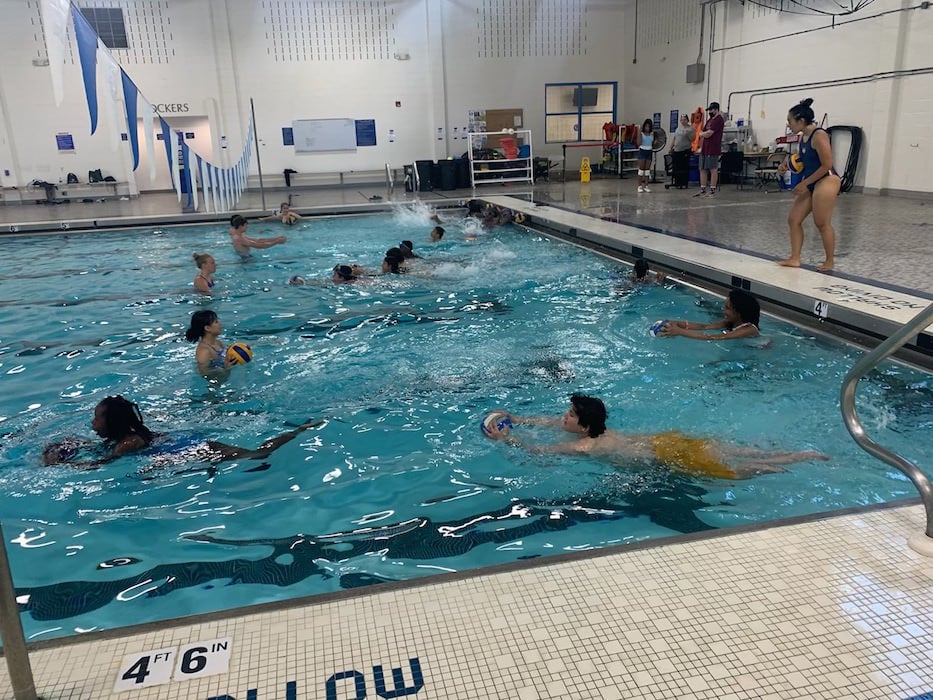 When Mariko Rooks asks Horizons at Foote’s eighth grade class if anyone has heard of water polo, just one hand goes up. Water polo, she explains, is a combination of the familiar sports soccer and basketball, but played in the water.

This summer marked the first year of USA Water Polo’s Pilot Program at Horizons, a summer enrichment program through the Foote School in East Rock. This collaboration aims to get students to learn a new sport and to become comfortable in the water. It unfolded in partnership with Yale University and Albertus Magnus College.

Rooks, a recent graduate of Yale University, has been playing water polo since she was 13. Born and raised in California, she was a four-year starter for the Yale women’s water polo team, and will be returning to the school for a fifth year to complete her Masters in Public Health. She is also the research project manager for USA Water Polo’s Racial Equity & Reform, and will be fulfilling a year of athletic eligibility that was lost due to Covid-19.

Andrew Lewandowski, who was recently appointed board chair of the USA Water Polo Northeast Zone, has worked alongside her on the pilot. Lewandowski got into the sport in high school—many of his swim teammates also played on the school team. After playing water polo throughout high school and college, he took a break from the sport to attend graduate school. He returned to coach Yale water polo for 15 years. Later, he pivoted to club sports, starting a team called the New Haven Hydras based out of Albertus Magnus College.

Lewandowski has wanted to do an outreach program for years, he said. Once he became chair of the Northeast Zone, he began to start conversations with the leaders of the task force.

“I felt like New Haven was a really good location to try to do something, just based on demographics,” he said. “There’s a large African-American and Latino-American population in New Haven that doesn’t have a lot of access to water, so it seemed like it was a really good fit.”

Water polo is a predominantly white sport, said Rooks. Both class and race play a lot into who has access to pools and programming. She wanted to change that.

“The task force has a number of different goals—one of them is figuring out how we are growing the game into BIPOC communities,” she said.

When it comes to water polo and aquatics, she said, it’s not just about having access to the sport. It’s also a safety and survival skill. The task force aimed to support existing resources in communities to get kids more involved and confident in the water as well as to expand the sport.

“My hope is that all the kids have a positive experience—that they have fun in the water and that they learn to respect the water in that bad things can happen,” said Lewandowski.

In the U.S., drowning is a leading cause of accidental death. The Centers for Disease Control and prevention estimate that there are almost 4,000 drownings per year, and it is the leading cause of accidental death for children between one and four years old. Both Rooks and Lewandowski said they hope that kids will understand that they can make the water safer and that it can be a really fun place to be.

If nothing else, they want participants to finish the program strong enough to be able to work their way out of a dangerous situation in the water should they ever find themselves in one.

“It’s been so awesome to see how excited the kids are, how good they are, and how fast they’ve been improving,” said Rooks. “These kids are brilliant, they’re really smart, really funny, they work really hard, and they’re really starting to get the hang of what water polo looks like.”

While water polo is a sport played mostly on the West Coast, there are similar programs taking place on the East Coast, like one happening through Brown University’s Boys and Girls Club, said Rooks. Rooks hopes that these regional programs will one day be built up enough to be able to have tournaments between the teams.

“It feels like a lot of birds with one stone, because you have the fact that folks need to learn how to swim and that they’re partnering with existing clubs—so you have the infrastructure and support there, and you’re getting this all done in a region where we want to see a lot of growth,” Rooks said. “We want to see a lot more water polo happening, because it does really provide you with a lot of opportunities to travel, to learn new skills, to engage with folks that they may not get otherwise.”

Rooks’ high school water polo program was bilingual and run by an intergenerational Latinx family, which made a huge difference in how the players felt, how they were supported and who was interested in joining the program, she said. She hopes that Horizons students starting water polo the way she did, surrounded by kids and role models who look like them, is “important in making them feel that this is something that they can do too.”

“I definitely would not be where I am today without water polo,” she said.

Julia Rosado is an alum of the Arts Council's Youth Arts Journalism Program working as an intern with the Arts Paper this summer. She is a rising junior at James Hillhouse High School.