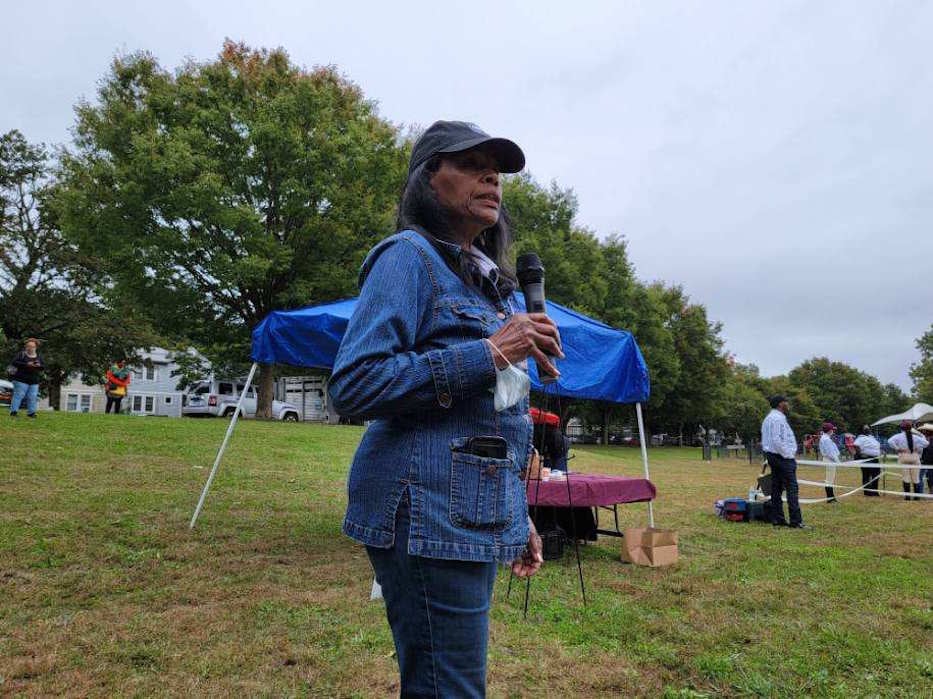 Standing in a pop-up stable in DeGale Field, Ebony Horsewomen Founder Patricia E. Kelly called on three volunteers to stand in the circle with her. In the distance, four horses waited on the damp grass. She eyed them cautiously. As she called for one, it came over and sniffed the participants.

If it had skipped one of them, Kelly said, a group of certified equine therapists would have known that something was off. Not with the horse—but with the person. 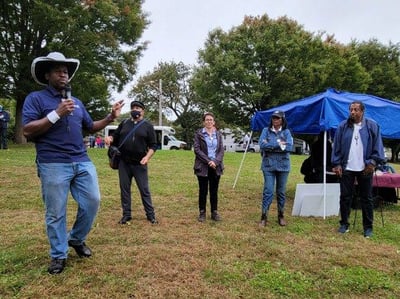 “This is all about addressing the trauma that our children in New Haven are experiencing,” Kelly said. “And it's a kind of a therapy that is a little bit better for our people than talk therapy.”

Equine-Assisted Therapy (EAT), sometimes called equine-assisted psychotherapy, pairs licensed clinical therapists with horses for a therapeutic approach that involves walking, grooming, and riding the animals rather than using talk therapy. Sunday, a range of speakers listed benefits that include regulating anxiety and anger, and fostering social and emotional growth.

The event has taken shape over the past months. Earlier this year, psychologist Rebecca Cohen reached out to the Ebony Horsewomen, which has used an equine-assisted therapeutic approach in Hartford for 36 years (the group is well-loved in New Haven, where members march in the Freddy Fixer Parade every year). In addition to Kelly, who quickly jumped onboard, the team worked with Yale Economist Malcolm Ashley, Beaver Hills Alder candidate Shafiq Abdussabur, musician Dunn Pearson, otherwise known as the “Black Beethoven,” community trauma specialist Kelvin LoveJoy, and several others.

Cohen, who is a third-generation Beaver Hills resident, pitched the event as a new way to broaden access to mental health. While riding horses in her youth, she noticed there was not much diversity among her fellow riders. As a kid, she couldn’t understand why she had access to the activity—which can be costly—and her peers did not. Now, she’s working to change that landscape by bringing an equine-assisted therapy to New Haven. Earlier this year, she launched Stable Grounds Therapy as part of that vision.

“When I had this opportunity to start my private practice and have this time I said, ‘You know, now's the time to start thinking about how do we bring horses back to New Haven, but to do it in a way that is equitable,’” she said. “Right?” 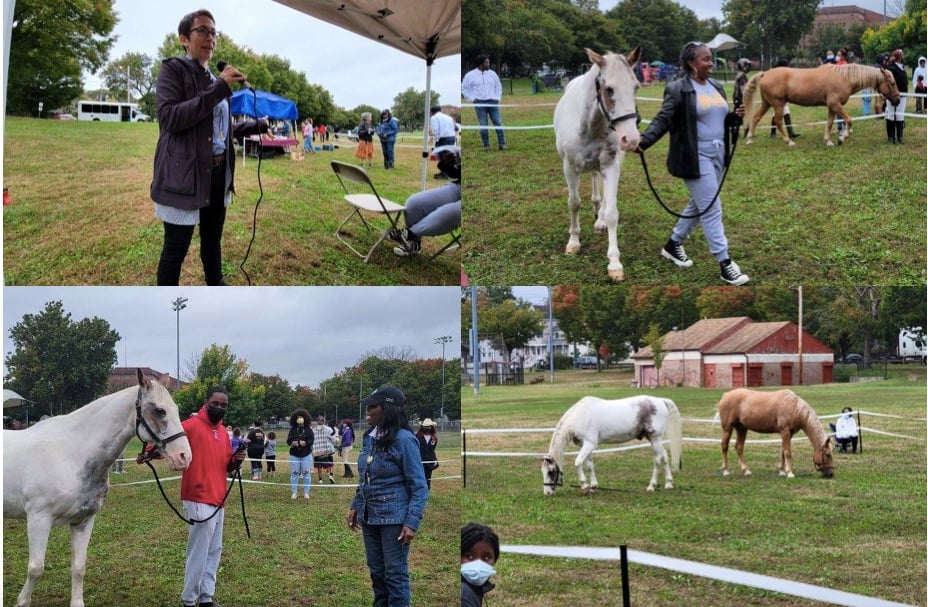 Kelly said that the approach, which turns to horseback riding as a form of therapy and emotional self-regulation, can be especially helpful for Black and Brown people who may not want to speak explicitly about trauma, depression, grief or anger. That’s especially true for Black boys and men, who may compartmentalize or dismiss their own feelings.

Horses can sense a person’s energy, she said—they are “prey animals,” and they know that humans are predators. If they feel anger or frustration, they “will tell you quickly, you're going to need to bring that down so that we can operate together,” she said.  A human, in turn, has to learn how to recognize, assess, and control their emotions to maintain their connection with the animal.

Kelly said that even before the pandemic, which has seen a state- and nationwide rise in depression, anxiety, unemployment, and violent crime, equine-assisted therapy was being used as an integral tool for mental health and healing. It may be more vital now than ever, as social and emotional isolation remain high and violence sweeps through Connecticut’s major cities. This year, New Haven alone has seen 22 homicides in 10 months. Hartford, where she practices, has also been plagued by violence.

A few yards away, members of the Ebony Horsewomen set up a space where attendees could walk with the horses in real time, getting a feel for the approach. In that makeshift stable, participants from five-year-olds to state legislators were able to try the therapy for themselves. 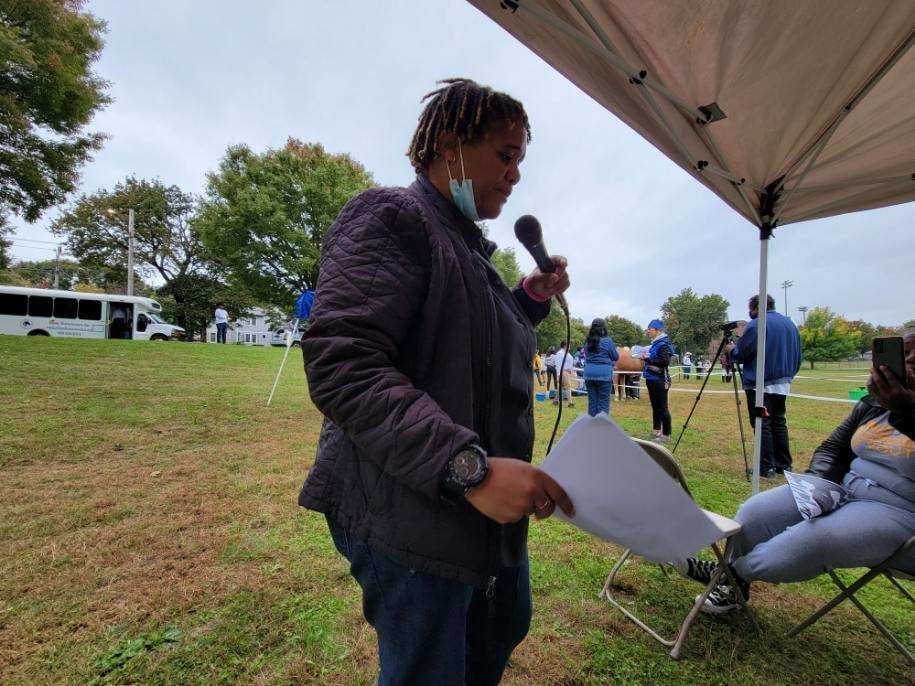 Equine-assisted therapy isn’t limited to riding, added therapist Melita Arms. Before ever getting on a horse, a person learns to walk and groom the animal. Only then, and when they’re ready, do they mount the horse and begin to move with it. Whether they’re walking or riding, she said, they’re doing so with both the guidance of a mental health professional and an animal that is sharply attuned to their emotions.

Arms said that if riders doing EAT tell two stories, one true and one not true, the horse can tell the difference between the stories. Therapists, in turn, have to read that horse's judgments and use that to assess how they interact with the person receiving therapy.

“It's not overnight,” Arms said. “It takes time. It takes time. It's growth. It's nurturing. It’s pouring hope into individuals that you can change; you can be better. And just take it easy on yourselves. So, we believe Equine Assisted Therapy is one of the products that provides our young adults the avenue to success.”

Ashley, who said he grew up as the son of the first African-American veterinarian licensed in Georgia, praised the approach. He described other animal-focused treatments, from horses to polar bears, that have been successful. He painted equine therapy as a potential path to anger management and violence prevention in New Haven.

“What we want to do is to make sure we don't lose any more [youth] and the more people you see coming to look at horses, coming to listen, that's one less person with a finger on the trigger,” said Ashley. “We can only stop things if we invest our time in things. Our children, their education, our community.”

Abdussabur, who lives just a few blocks away, said that a team is working to bring the horses back to a dedicated greenspace in New Haven. In the meantime, he and members plan to have seasonal events in the park. He and fellow team members have also branched out to community partners, including the Stetson Branch of the New Haven Free Public Library.

Stetson Branch Manager Diane Brown, who has turned her library into a community hub, was in attendance to show her support. She said that she is happy to be on board to support future iterations in the city.

“I'm excited, she said. “I'm excited to be supportive, as a citizen and supportive as a librarian. And going forward, whatever I can do to support this initiative I'm in. It's a beautiful thing.”