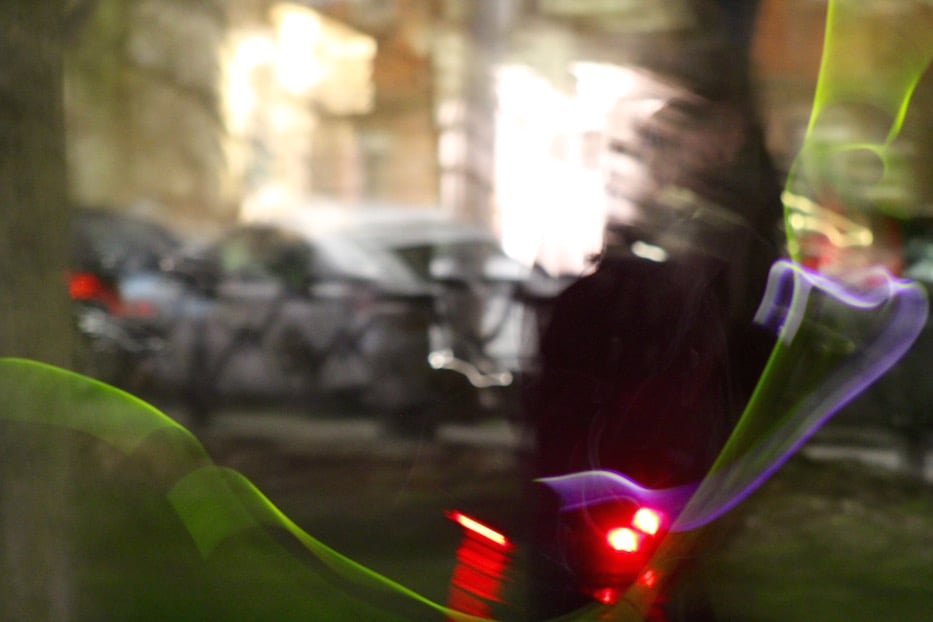 At first, the lights were far away, streaks of red and green against a wet blue-black. A strand of purple came through the darkness, trailing neon light. Slowly, three bodies emerged, hands and legs in constant motion. All of them jammed out, standing at least 10 feet apart as electronic dance music seeped through their ear canals.

The music shifted from Black Motion to L.E.J. But no one could hear it.

Friday, friends gathered—without much gathering at all—in Wooster Square for the second-ever “Distant Planets,” a physically-distanced, silent dance party at which sanitized glow sticks, masks, scarves and bandanas featured prominently. The event is the brainchild of Eden Almasude, a psychiatry resident at the Yale School of Medicine who has also been leading relief efforts with the Semilla Collective and New Haven Mutual Aid.

“I’ve been feeling pretty stuck and stagnant in my body, and dancing is a great way to get through that,” she said. “There’s plenty of space out here to respect public health guidelines. It’s spontaneous, so anyone can join in, and you’re your own best DJ.”

Initially, Almasude was inspired by a video of a physically distanced dance party in Italy, where a DJ performed a set from his balcony and cranked up the volume. Those parties have since spread, cropping up from Washington, D.C. to California in various forms. Almasude has rules meant to protect the health and safety of attendees, including those who roll in unexpectedly on their isolated walks through the square.

Dancers must stand at least 10 feet apart, maintaining that distance even as they move. They are welcome to bring their own music, but she and her colleague Azim Munivar have also made a long playlist, with decades-old hits and electronic dance music from around the globe. As a healthcare provider on the front lines, she sees it as part of a ritual to preserve her mental health and sanity.

“I’ve been grieving a lot,” she said, noting that Kevin Young’s The Art of Losing has become an especially meaningful text for her. “The way that our lives are disrupted … it’s affecting everyone. It feels like there’s too much to grieve. I’ve been seeking out these moments of joy and trying to build in ritual. Cooking, making with my hands, That’s always a stress reliever. And I’ve been reading a lot of poetry. It feels like a time for poetry.”

And, she added, dancing when she can. Friday, Corona’s “The Rhythm of the Night” kicked things off just after 8 p.m., although no one could hear the music soaring over the square. Beside a tree that had not yet exploded with cherry blossoms, Almasude swayed back and forth, shoes steady on damp soil and grass. A humid chill ran through the air. Nobody seemed to mind.

Some 13 feet away, New Haven Mutual Aid co-founder Sarah Eppler-Epstein danced in a tiny circle, their neck decorated with pink baubles that glittered against the dark. A neat, perfect loop of green light hung below, just over their heart. Across the walkway, close to one of the square’s fences, New Haven Independent reporter Thomas Breen flipped on Scissor Sisters and began to groove.

From another corner of the square, New Havener Elliad Dagan drifted toward the group, on one of his nightly walks through the city. Without a playlist, he started moving to a rhythm entirely of his own making. As he danced, a friend 10 feet away said he was looking to the trees for inspiration. Other than a few outings to support small businesses—he had just been by New England Brewing Company, which was still open for pickup—he is in relative isolation.

“I miss my girlfriend, and the outdoors, and all the things we used to take for granted,” he said.

That’s part of the point, Almasude said. She never knows who will show up. The movement is a form of therapy, interpreted in different shoulder-shrugs, bent knees and elbows, and skyward-stretched arms.

For her, it’s a chance to work through not just the grief of COVID-19, but also the mental and emotional exhaustion, and possible exposure to a deadly disease, that she’s been experiencing as a healthcare worker in a country that was not prepared for the pandemic. On social media, Almasude has been vocal about the lack of personal protective equipment (PPE) that she and her colleagues are given to work with.

“It’s a hard time to be a physician and an especially hard time to be a resident,” she said. "There’s all of this discussion about ‘healthcare heroes.’ I don’t want to be a hero. I want to just sit with my patients and do the work I went into this field to do.”