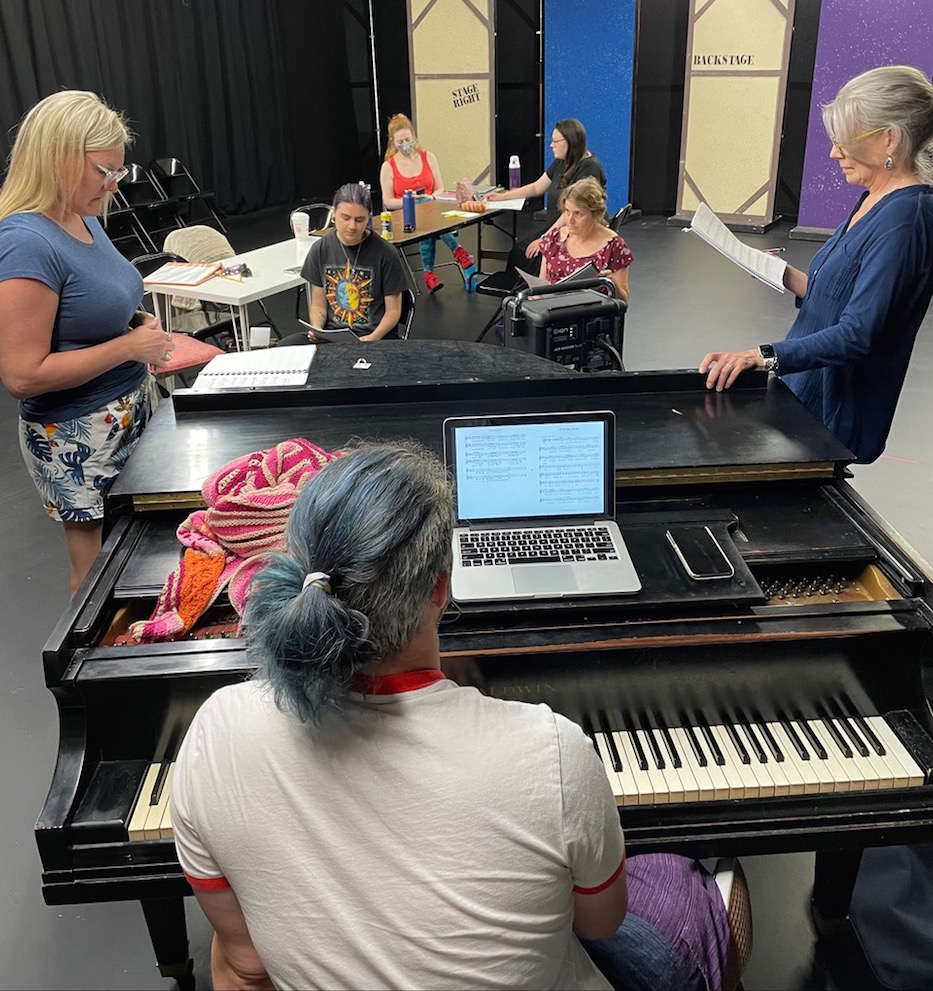 It’s early Sunday afternoon, and the ​​​​LGBT Book Nook is humming with weekend activity. At the front desk, Kay picks up the phone. It seems that she’s ready for anything: already she’s directed readers toward queer memoirs and science fiction, fielded questions on LGBTQ+ geopolitics and whether or not the store carries lubricant. But this call is different. She can hear someone on the other line, breathing into the receiver.

It’s creepy. And yet, something tells her not to hang up.

Kay is a lead character in As Long As We’re Talking, a new and timely musical from Pantochino Productions, Inc. and a small but mighty cast and crew. Written by Bert Bernardi with music from ​​Justin Rugg, the musical tells the story of staff and customers in a fictional LGBTQ+ bookstore in Chicago, who line up to stay on the phone with a queer person in crisis. It is based on the real-life experience of Joe Faust, who was at one time the manager at the Indianapolis-based bookstore Out Word Bound.

In 2002, Faust picked up the phone expecting a customer. Instead, the caller on the other end was a person who thought he might be gay, and was afraid of what that realization meant for his life. As Faust stayed on the line, customers in the store took turns speaking to the caller one by one. Years after the bookstore closed, Faust tweeted about the experience, and the story went viral.

As Pantochino picks up the story, it broaches self-harm, suicidality, bullying, internalized homophobia, chosen family, and what it means to be in community. The show runs from June 24 through 26 at the Milford Arts Council, where it joins both regional and statewide celebrations of Pride Month. It has received support from The Community Foundation for Greater New Haven and CT Humanities and is sponsored by the Milford Prevention Council.

“​​You know, we've been doing family-friendly theater forever,” said Bernardi, who founded Pantochino in 2010 with his husband and co-producer Jimmy Johansmeyer. “In the past year or so, everyone has awoken with the question of ‘What does what we do mean?’ I used to think of family-friendly theater as mom and dad and the kids. But there's all kinds of families, and this is a story for all families today.”

Bernardi has been enamored of—and inspired by—the story of Faust’s experience since Johansmeyer brought it to him in a news article over a year ago. From the moment Bernardi read it, “I could picture it [as a musical], and I knew how it would go,” he said. He could imagine the cast of characters and the lyrics ringing out across a stage. He loved the story of a community coming together to comfort a person who they’d never met. For him, it also felt personal: his lived experience as a gay man became part of the show.

“It's a topic that I happen to know a lot about and feel a lot about,” he said. “I know that material so well.”

He also knew it would mark a departure for the company, he said—and was willing to take the risk. In the past years, attacks on LGBTQ+ and trans rights have multiplied across the country. Connecticut is not exempt from discrimination: in March, a Hartford-based school nurse was placed on administrative leave after making anti-LGBTQ comments about a student on social media.

In the state, trans and gender nonconforming people have more trouble finding safe and secure housing than their cisgender peers. Earlier this month, the New Haven Pride Center zeroed in on a rule change at the Connecticut Department of Public Health that makes it more difficult for trans people to receive gender affirming care under HUSKY, the state’s public insurance option.

The book and lyrics came to him quickly, as if the show had been sitting somewhere within him for years. And in some ways, it was: As Long As We’re Talking is also his story, and the story of so many people he knows and loves. Growing up outside of Boston and later studying theater in Connecticut, Bernardi heard “a thousand coming out stories,” he said.

As he wrote, he folded many of them into the script, building a world of generous, funny, sharp-tongued and gentle book nerds who somehow all found themselves in the LGBT Book Nook at the same time. He has also included a piece of himself, embedded in a monologue that he now watches an actor run through every night.

Rugg, who shares a West Haven home with Bernardi and Johansmeyer, began working on the music while Bernardi was working on the book and lyrics. Bernardi said the two are extremely collaborative: he will often write out lyrics with a melody in mind, and “then Justin will send me a melody that is far superior,” and the two will take it from there. Johansmeyer, meanwhile, is co-producing and acting in the show and has also stepped on as costume designer.

While the play’s source text is based in the real world, As Long As We’re Talking is very much a dramatized version of events, with an entirely different cosmology of characters. As each takes their turn on the phone, audience members get to know their stories one by one. For instance there’s the Girl in Boots (Rachelle Ianniello), whose upbringing in small-town Kentucky was once at odds with her blooming identity as a lesbian. There’s the Business Man (Johansmeyer) who always knew he was “different,” but took years to figure out why and how. There’s Pride Guy (Justin Rugg), whose fear of rejection kept him in the closet for years.

As they take their turns around a call set to speakerphone—a clever device that lets the audience hear the caller (Micah Soviero) on the other end—they tell stories that audience members may feel that they’ve heard some version of before, made spectacular as Bernardi and Rugg put them into song. In a credit to Bernardi’s writing, the LGBT Book Nook never stops feeling like a tight-knit community, even as characters dip into monologue. While the subject matter may be serious, it is also laced with a specific, often touching humor and a few zingers that are just salty enough.

With a set from Von Del Mar and costumes from Johansmeyer, the crew has transformed the MAC’s intimate stage into a bookstore, crammed with titles and shelving units. The goal, Bernardi said, was to make it feel homey and safe.

"I have to envision what this bookstore must have looked like,” he said. “I pictured it being this cluttered, small, little nook of a place in a big city. A refuge.”

There’s a bittersweetness there too: the real Out Word Bound closed in 2009. It’s a reminder, without Bernardi ever having to say it, to support your local bookstore while it still exists.

For Bernardi, it feels like exactly the right play to be performing at this moment, he said. In March 2020, Pantochino had just secured a rehearsal space in the Connecticut Post Mall when the pandemic hit the state. As the company shuttered its in-person operations, artistic staff got creative, writing a musical that Bernardi, Rugg and Johansmeyer could perform outdoors, in people’s backyards and driveways. They launched a podcast and a series of online classes, and later worked to bring back their signature teen programs and summer camp.

The work also speaks—perhaps more than any previous Pantochino production, Bernardi said—to the current moment. This year, ​​a record number of anti-LGBTQ+ and anti-trans bills have appeared in state legislatures across the country, threatening gender-affirming care and protections from New Hampshire to Missouri to Washington State. In a report last year, The Trevor Project also studied a rise in depression, anxiety, suicidality and self-harm linked to the Covid-19 pandemic.

Bernardi and cast members are rising to meet the moment, he said. As they open the show at MAC this weekend, Pantochino plans to donate a portion of proceeds to The Trevor Project, an anti-suicide and crisis hotline for LGBTQ+ youth. Bernardi said he’s been thinking a lot about what the words “chosen family” mean to him as cast and crew members come together to leave their mark.

It’s part of what makes him feel ready to bring the work to the stage, he added. He hopes this limited engagement, with just four performances, will be the first of several runs of the show.

“What are we if we shy away from doing this now?” he said. “We have to do it, and I wanted to do it as soon as we could.”

As Long As We’re Talking runs at the Milford Arts Council, 40 Railroad Ave S., June 24 through 26. Tickets and more information are available here. A portion of proceeds will benefit The Trevor Project, an anti-suicide hotline for LGBTQ+ Youth.