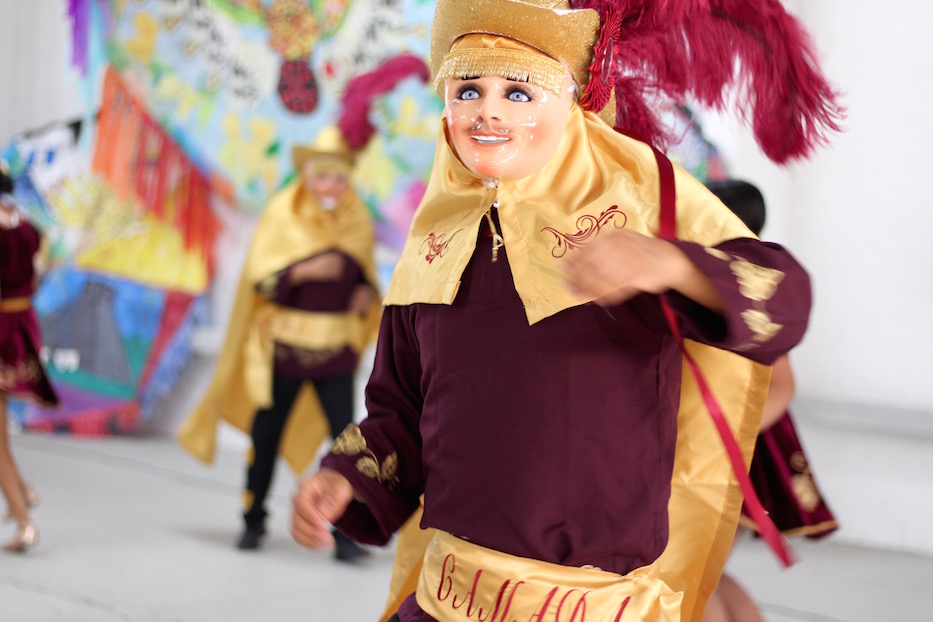 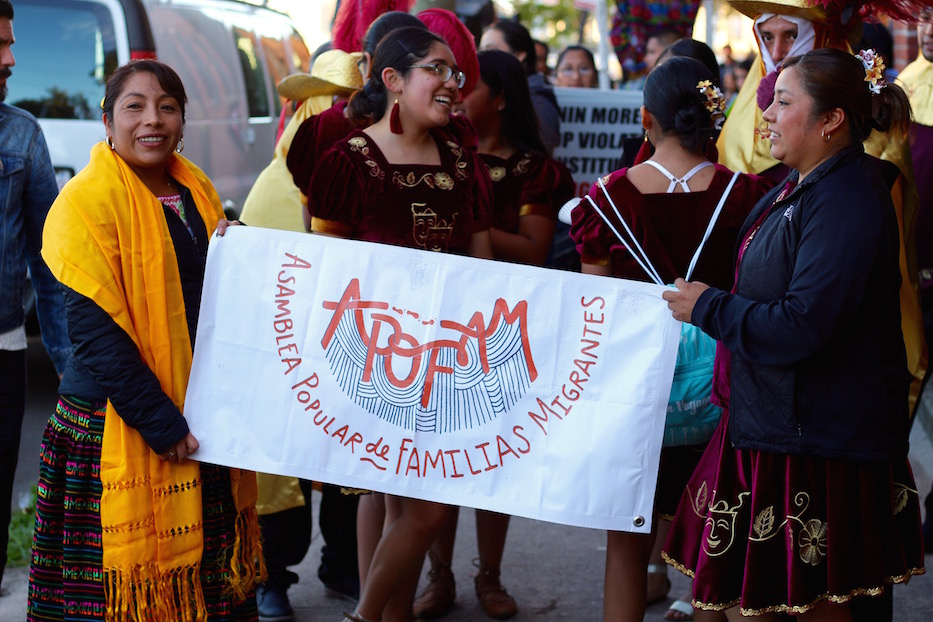 Just after 3 p.m. on Saturday, magic was unfolding on Mill Street. Inside an old factory building, feet slapped the floor in a rhythm born 2,000 miles away in the heart of Tlaxcala, Mexico. A sweet, steady chorus of young voices rose around careful, slowly-strummed guitar. Flushes of steam rose from crisp empanadas and Oaxacan tamales wrapped snugly in banana leaves.

In the city, languages including Mam, Totonaco, Kaq'chikel, Q'anjob'al, and Na’huatl are just some of those spoken by new immigrants who arrive from Mexico and Guatemala, bringing with them rich and often endangered culture. 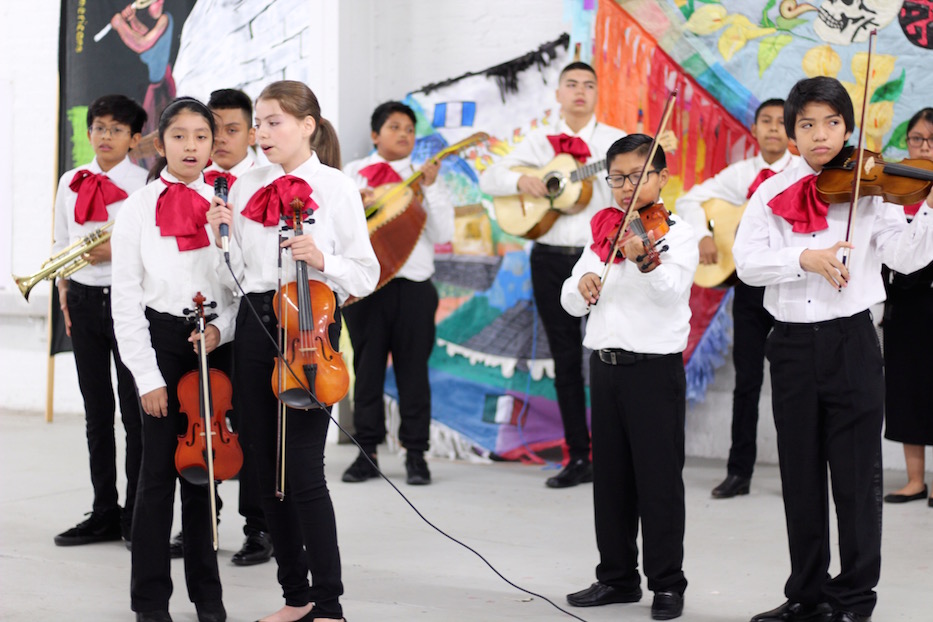 The event culminated in a march and rally to change the name of the nearby Christopher Columbus Family Academy—a public elementary school in the heart of a predominantly Latinx neighborhood—to Tlahuicole Academia de la Dignidad, after a sixteenth-century warrior from New Haven’s sister city of Tlaxcala.

“Much of the immigrant population living on the East Coast has indigenous origin,” said Red de Pueblos President Marco Castillo, who had commuted from New York for the day. “Many of these communities keep their cultures in the shadows for fear of being discriminated against or deported. Yet many of these immigrants rebuild their communities, their traditions, their languages. So October 12, it’s a unique opportunity to honor the contributions of indigineous Americans.”

The event came before the second Monday of October, which Connecticut still observes as a federal and state holiday in honor of Christopher Columbus. As of this year, over 100 municipalities and several states have formally replaced Columbus Day celebrations with Indigenous Peoples’ Day, while others still celebrate the two alongside each other. 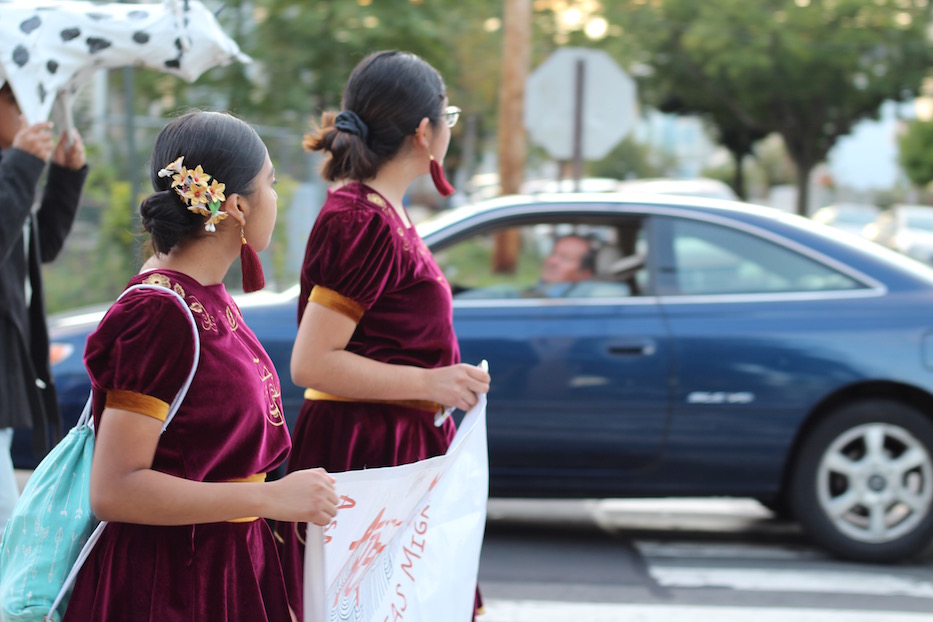 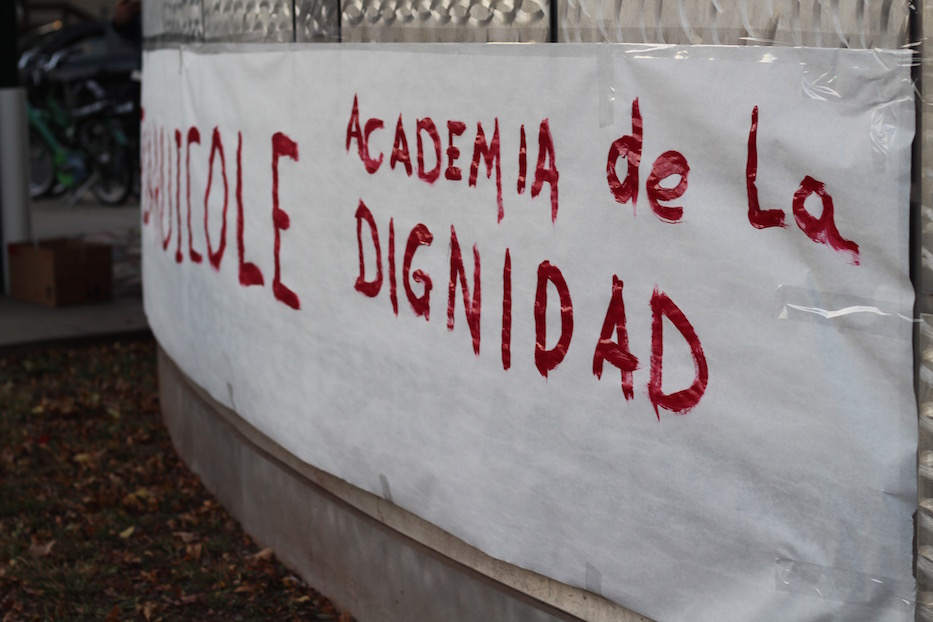 In May, the city’s Board of Alders debated a resolution proposed by Fair Haven Alder Kenneth Reveiz to replace Columbus Day with Indigenous Peoples’ Day, but no action was taken after a three-hour hearing. Events in honor of Indigineous Peoples’ Day are planned on the New Haven Green for Monday afternoon.

As performers flowed from poetry to music and propulsive dance, snippets of Spanish and English mixed with indigenous languages, which are still very much alive. Ushering in celebrations for the afternoon, ULA member Minerva Soame began with a poem in Na’huatl, an indigenous language still spoken by over a million Nahua or Aztec peoples in Mexico.

As she spoke, a huge, delicate installation by Guatemalan artist Pedro Lopez winked out in vibrant color behind her. In the next weeks, Lopez will be working on huge kites and banners for ULA’s annual Día de los Muertos parade, now in its eighth year. The work will be on display afterward at Artspace New Haven.

Performances that followed echoed that call to celebration—and education—as they paid homage to the traditions, languages, and cultural customs that many residents have had to leave behind or hide on their journey to the United States. Taking the floor to cheers from parents and siblings, students from Mariachi Nueva Inspiracion filled the room with music, some strumming guitars as others put their bow to strings and swayed as they sang.

Adam Romo, who is currently the director of Mariachi Nueva Inspiracion and the Mariachi Academy of New England, said he teaches the form as a way to keep tradition alive in a place where some kids may feel severed from their cultural legacies or their parents’ histories. After moving from the West Coast four years ago, he said he’s made it a personal mission to “expand the frontier of mariachi” on the East Coast.

“I want to make sure that it’s passed on to the next generation, that they learn the history,” he said. “We’ve assimilated, but it keeps the culture alive.” 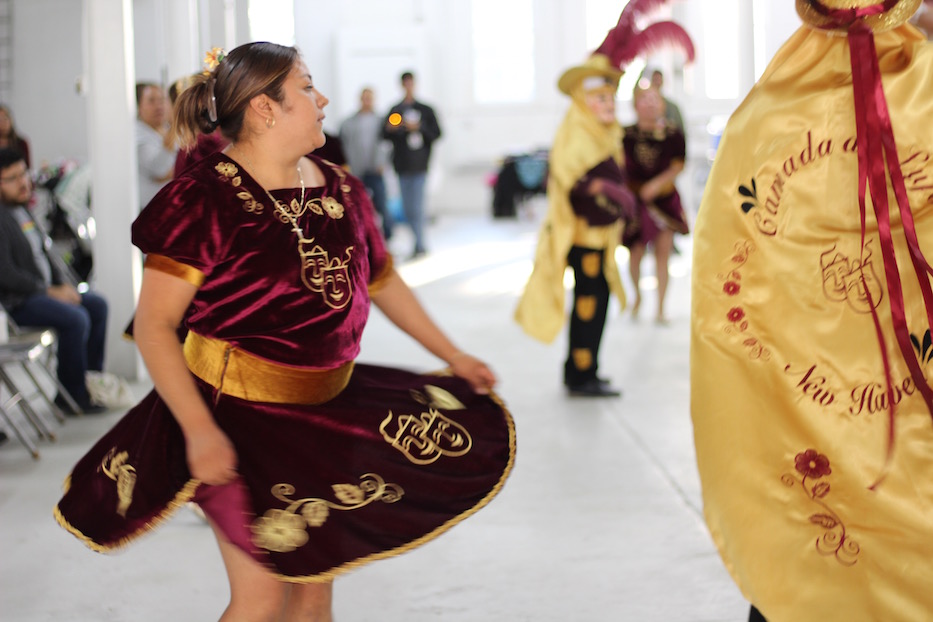 As they swept onto the floor with swishing, sleek burgundy skirts and flushed carnival masks, Camada monumental de lujo de New Haven took the audience to Tlaxcalteca, one of New Haven’s seven sister cities. As the audience snapped back to attention, dancers worked their feet, hips and hands, a tiny, synchronized version of Carnival Tlaxcalteca unfolding with every beat. By the end, the audience watched on the edge of its seats.

The day’s activities were followed by a march and rally to rename Columbus Academy, a tradition that began last year. As close to 40 walked from Mill Street down Lloyd Street and onto Blatchley Avenue, cars honked their horns in support, a few families piling onto porches or craning to see from where they stood in their yards.

Drivers pumped their fists and slowed their cars long enough to read signs that decried Columbus as the most dangerous immigrant to arrive in the U.S. ULA member Erick Sarmiento lifted a bullhorn intermittently to his mouth, working in cheers of “el pueblo/unido/jamás será vencido!” (“the people/united/will never be defeated!”) between short, mid-walk speeches in Spanish. 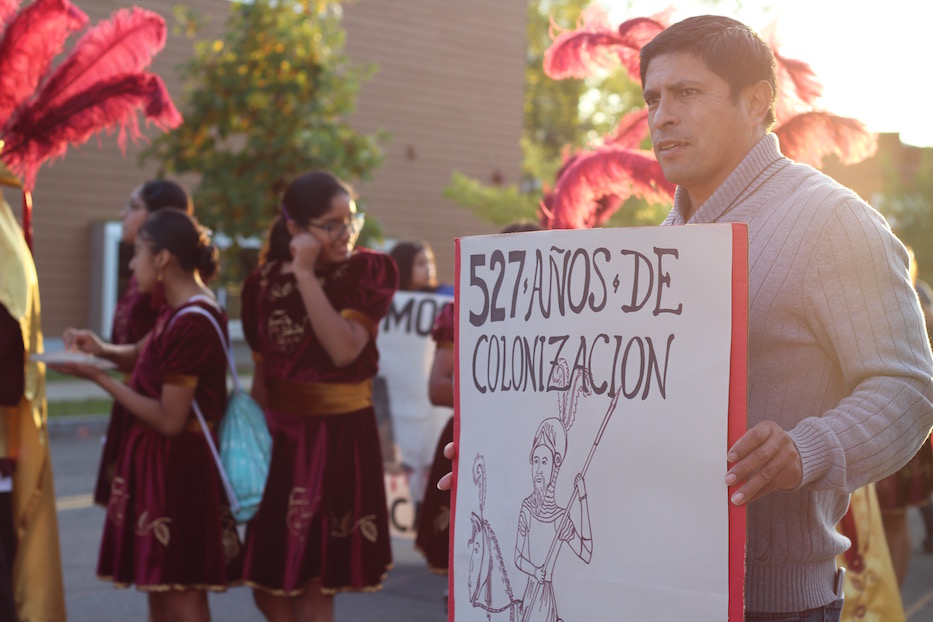 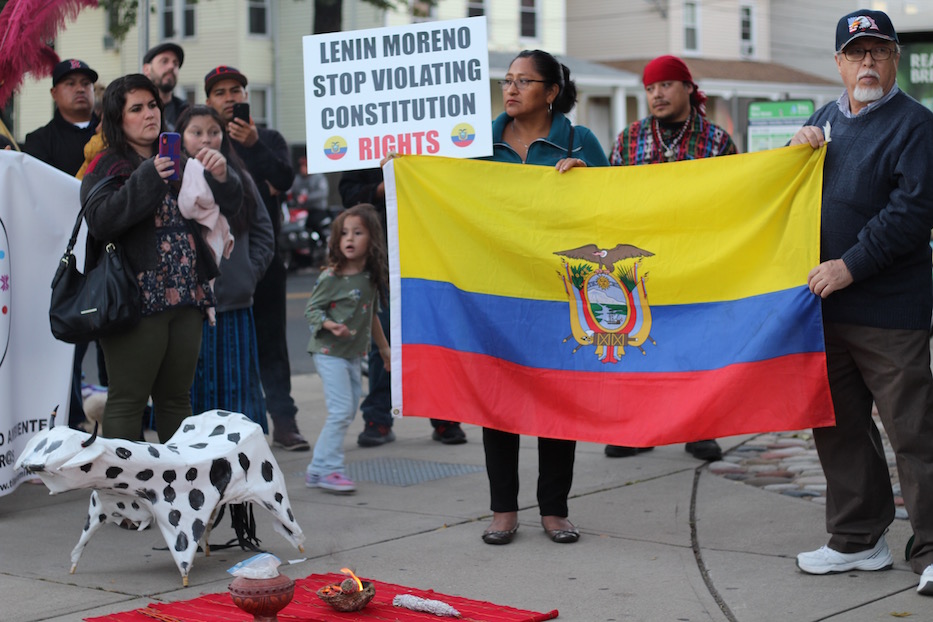 As organizers worked to paper over the name of the school and paint in their new one, a lineup of speakers wove in indigenous rights, austerity measures in Ecuador and the violent protests that have resulted from them, and the languages and cultures that are being lost or made to go underground as groups migrate in search of life free of persecution, violence, and scarce resources.

“We make your food,” Castillo cried as a bundle of sage burned before him. “We do your labor!”

Castillo knows the feeling firsthand, he said. His father is from the Mexican city of Veracruz, and he grew up learning about what it meant to be to be proud to be Huasteca. The name of a school and dedication of a day is the least New Haven can do, he suggested.

“For 527 years, indigenous communities have been resisting and trying to survive,” he said. “A lot of communities need hope, and they need to experience their cultures.”