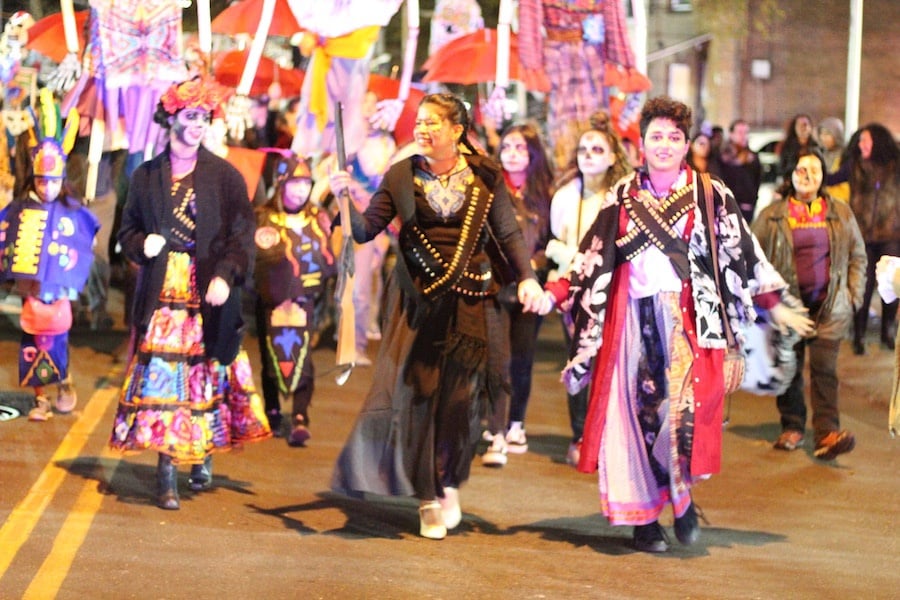 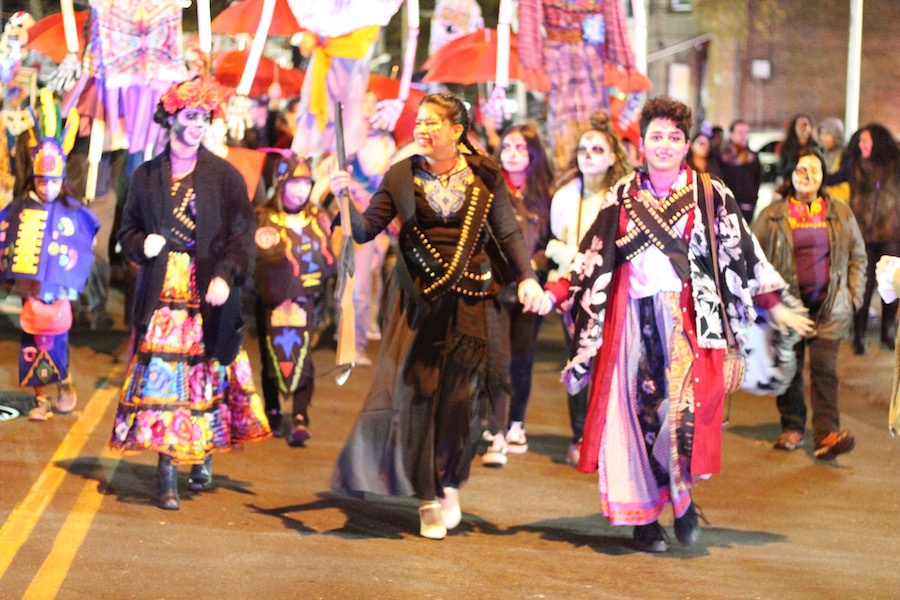 Sixty dancing skeletons, 20 bullet-vested soldaderas, a brass band in the bed of a truck, three stilted jugglers and one anti-border wall stopped traffic on Grand Avenue Saturday—and many of the drivers didn’t seem to mind at all.

That was the scene Saturday night, as Unidad Latina en Acción's (ULA) seventh annual Día de los Muertos parade wove through the streets of Fair Haven, filling the neighborhood with its sound.

Hosted by ULA with support from Red de Pueblos Transnacionales, the Sex Workers and Allies Network (SWAN), Party for Socialism and Liberation (PSL) and others, the parade drew over 250 participants, with many more people who watched from their porches and fire escapes, or came later for a party at Bregamos Community Theater that lasted into the wee hours of the morning. 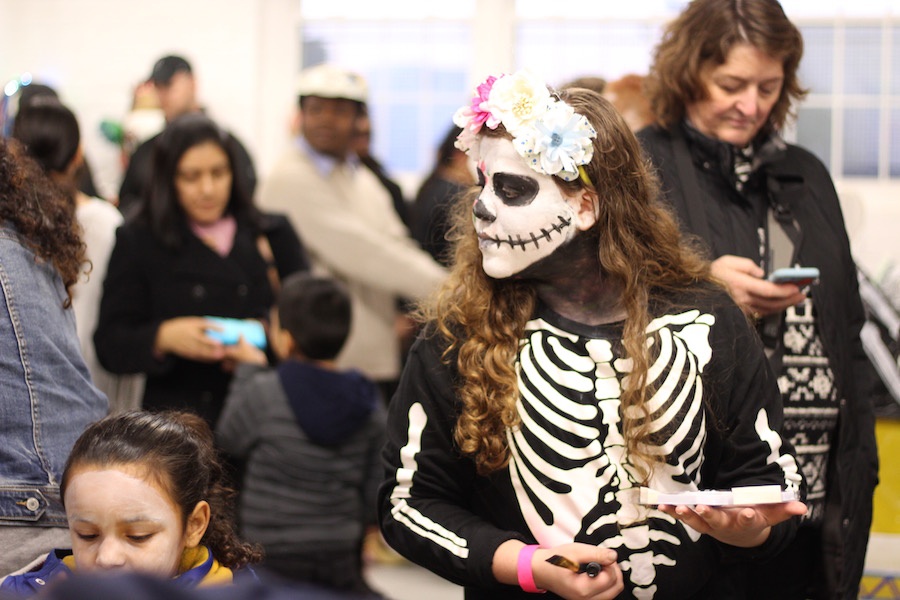 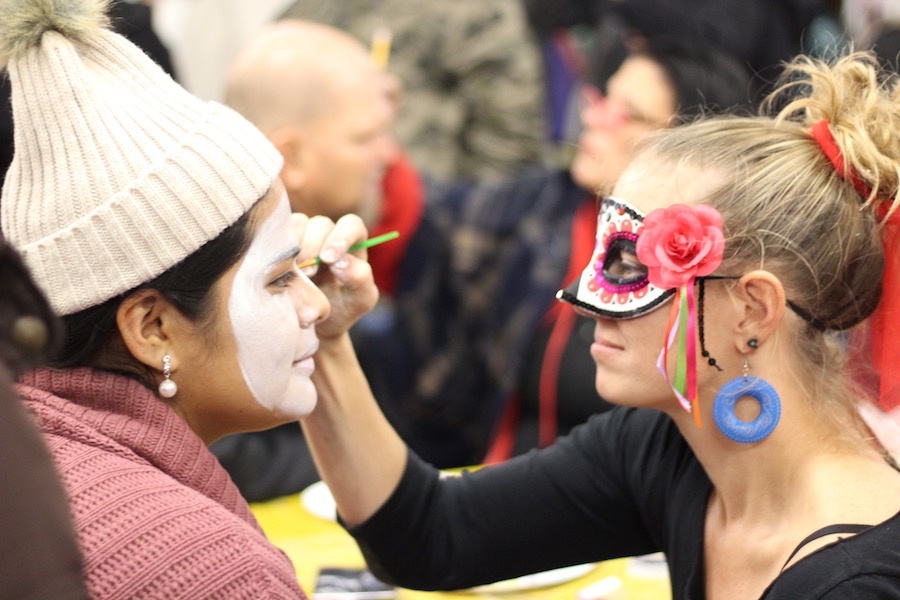 The holiday finds its roots in an ancient and precolonial traditions of ancestor worship, honoring spirits of the departed with decorative memorial altars, incense and candles, great fanfare and song.

This year, organizers dedicated the celebration to four Latinas who have been victims of partner, domestic, sex worker, and state violence: 20-year-old Claudia Patricia Gómez Gonzáles, who was shot dead by the U.S. Border Patrol, 33-year-old Roxana Hernandez, a transgender woman from Honduras who died in Immigrations and Customs Enforcement (ICE) custody in May, and former SWAN members Leila Riviera and Ines Perez.

“I think it’s important this year especially,” said ULA member and longtime organizer Jesus Morales Sanchez, preparing for the parade with a large dinosaur mask that he had strung with multicolored lights. “Every year, it’s been about the violence that our community is receiving—whether it’s a wall, whether it’s threats, whether it’s our kids potentially risking having their citizenship taken away. But there’s a type of violence that we don’t really talk about a lot, and that’s violence against women and how it is very prevalent in our community.” 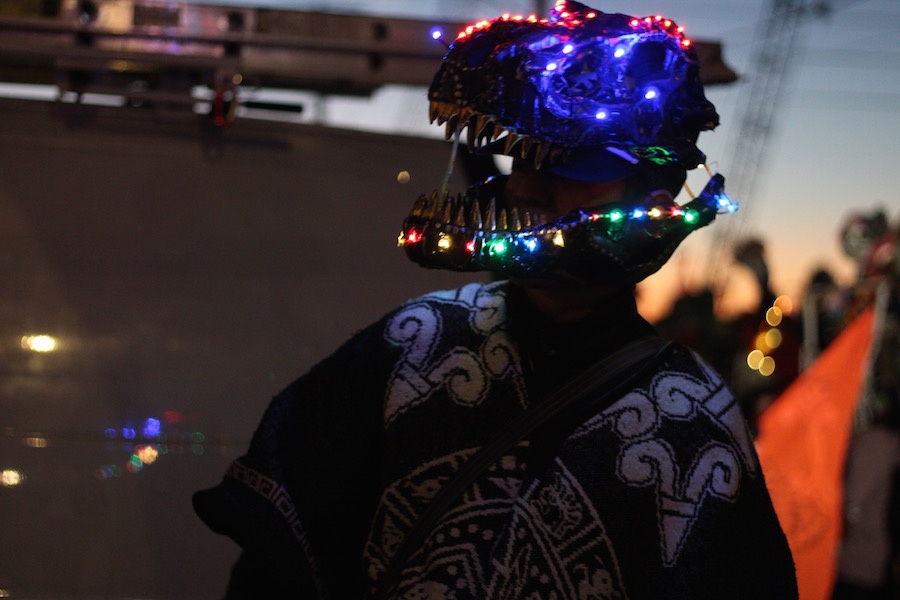 “I think that this should be a wake-up call to say it’s happening,” he added. “Not only at the border, not only at the hands of immigration enforcement, but also in our neighborhoods. Leila and Ines are a testament to that, and we want to honor their lives.”

Morales Sanchez said that the theme was in keeping with the parade’s political, wide-reaching and intersectional mission. A few years ago, ULA honored the 43 students who went missing in Ayotzinapa, Mexico, for whom the country has not yet admitted responsibility. In 2016, the group honored its indigenous and immigrant roots, working with the artist Pedro Lopez to learn about the day not just in Mexico, but also Guatemala. And last year volunteers built a multi-paneled anti-wall, over which skeletons climbed quickly as two shriveled, bony hands clutched at a dollar bill.

Those festivities were in full swing before the parade began at 26 Mill St., an old warehouse where preparations have been unfolding since last month. Just minutes after an official start time at 4 p.m., the space began to fill up, a bay of long tables and chairs soon full with New Haveners ready to transform from their mortal selves into catrinas and catrines. A few Santas Muerte sailed through the room, thick flower crowns fixed in their hair. On the walls, ornate skeletons leaned on their sticks, casting long shadows as they waited for volunteers to carry them outside. Floats sat at the ready, skeletons sticking out from the sides. 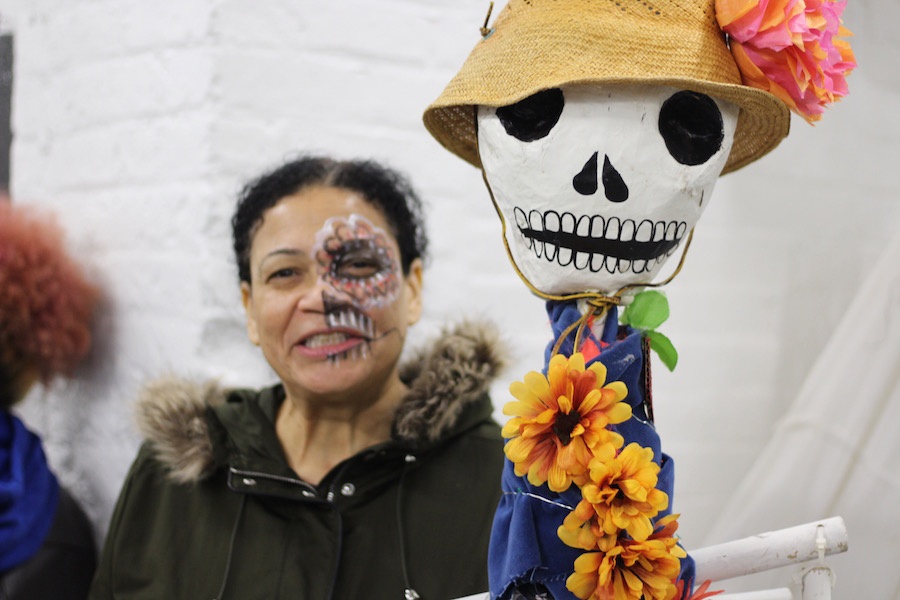 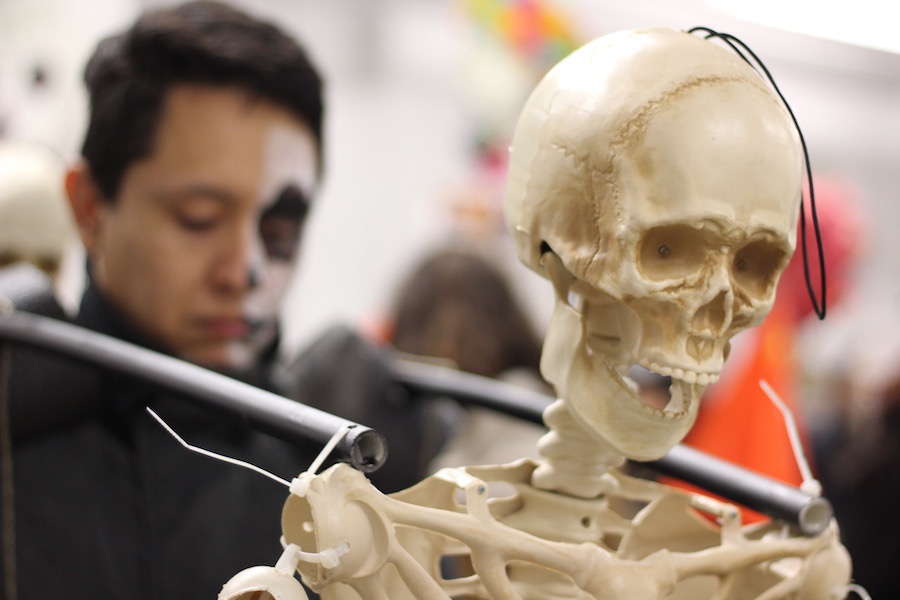 At one end of the table, Arlly Pinos touched up Pastor Paul Fleck’s makeup, laughing as the two decided whether or not green was a good idea. Fleck chatted with First and Summerfield Rev. Vicki Flippin, white face paint smudging on the rims of his glasses as he put them back on, and tried not to smudge anything before the parade.

Closer to the middle, first-timer Robin Ellington looked around with wide eyes, one hand steadying the large, dancing skeleton she was planning to carry for over a mile. A former New Yorker who moved to New Haven to be closer to her daughter Kerry, she had arrived early, taking time to paint a large, blooming pink and black flower around her left eye. She said that the parade dovetails with her political outlook, through which she’s also becoming involved in prison reform in the state.

“It represents the fact that New Haven can be supportive,” she said, pausing as ULA Founder John Lugo called for 60 volunteers to carry floats and skeletons. “I don’t believe in any constructs. The borders are fake.” 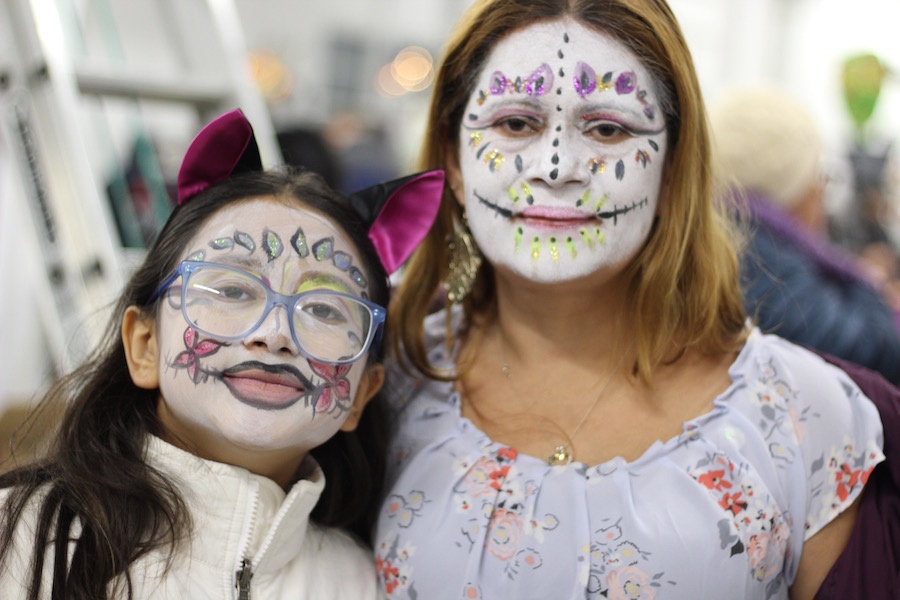 Just a few meters away, 10-year-old Hayley Chavarria joked around with a few latecomers, comparing notes on face paint. After supporting her mom Nury as she sought sanctuary in New Haven’s Iglesia de Dios Pentecostal last July, Hayley said she learned to speak out about immigrant rights. Now, she does so whenever she gets the chance.

“I hope that he [Trump] gets kicked out of office, because America’s president is one of the strongest in the world, and he has the power to do what he wants,” she said. “He just wants to do what he wants and not what other people want.”

“I would say, ‘why are you doing this to people?’” she continued, explaining how she would address the president if ever given the chance. “They did nothing wrong to you, they just came here from another country. What’s the big deal about it? People came here to be free and that’s what America is, the land of the free. But now you’re making it a country that is not the land of the free. It’s the most dangerous country in the world.” 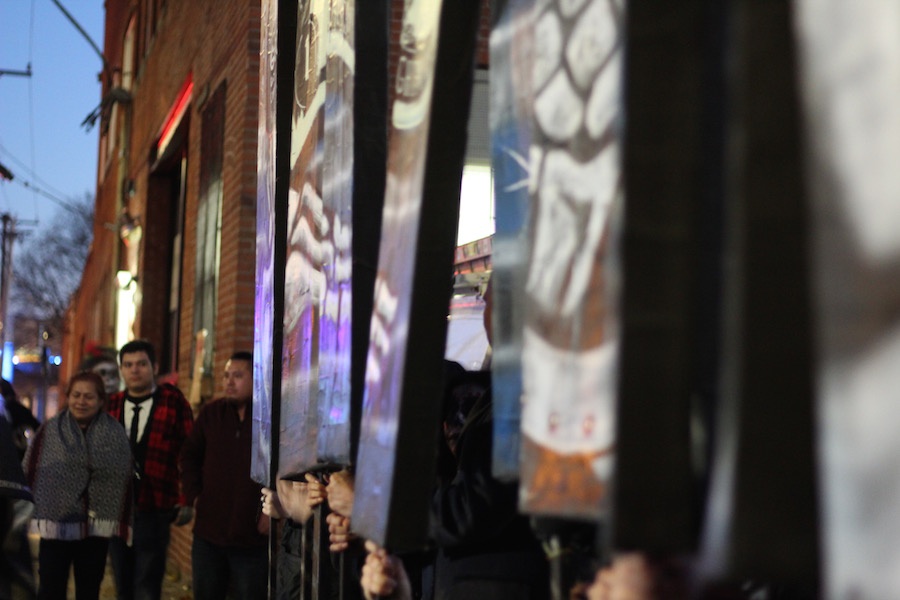 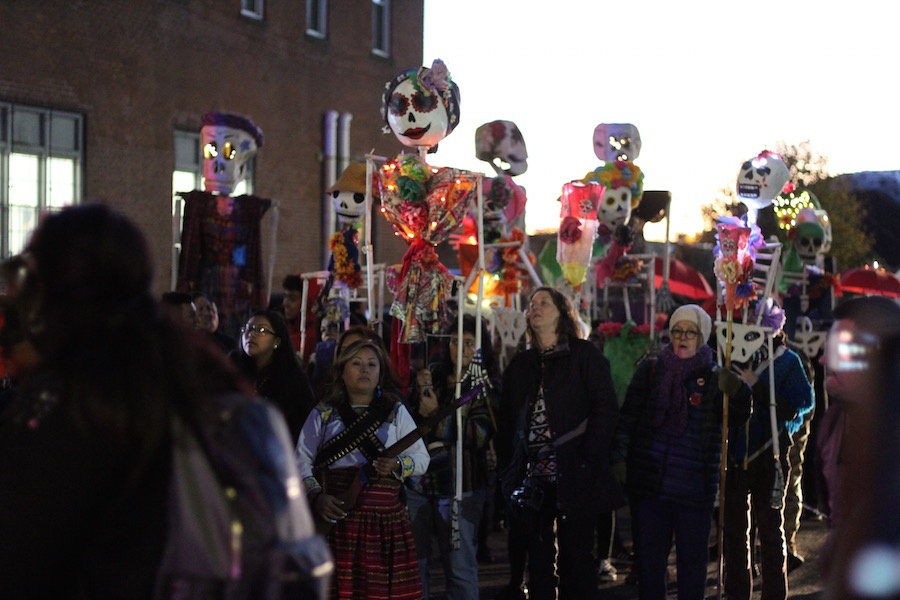 From somewhere inside the building Lugo made another announcement: the parade had enough volunteers to begin, as soon as everyone assembled outside. Marchers filed out, inching past the door attached to floats, holding skeletal fish, swaying with their bony counterparts. Volunteers from SWAN opened their red umbrellas, a nod to the sex worker advocacy organization Red Umbrella Project. A sea of skeletons bobbed over Mill Street and Saltonstall Avenue as as dusk fell over the neighborhood.

Fresh off a performance on the New Haven Green, stilt-walkers from Circo Ollin juggled white and yellow bowling pins, stopping to crack a whip in the air. The temperature dropped, as if on cue. Attendees pressed themselves to the sides of the street for a truck carrying the Hartford Hot Several Brass Band to make way.

“Vamanos!” someone yelled from the front. And even before the band had started playing “La Bamba Rebelde,” the parade was off.

Behind the truck, several of last year’s revolutionary soldaderas carried the first chant, some hand-in-hand at the front of the line. As she led the charge down Saltonstall Avenue, ULA organizer Vanesa Suarez raised her face to the cool night and cheered.

At the truck, the Hartford Hot Several’s Josh Michtom cued the band into ”La Bamba Rebelde,” interweaving the Las Cafeteras cover with a bilingual version of “Twist and Shout.” He alternated between horn and megaphone-turned mic. As he hit a hook—Yo no creo en fronteras, yo no creo en fronteras yo cruzaré yo cruzare yo cruzare—a few red umbrellas and skeletons nearby swayed a little with the music.

As the group turned the corner from Saltonstall onto Loyd and Loyd onto Wolcott, families came out of their houses, some running onto the sidewalk with their phones and cameras while others stood in their doorways, still nibbling away at dinner or waving to the group as it passed. The “wall” that marchers carried rippled under a blue-black sky, its panels shifting like dominoes. Toward the back, three souped-up cars blasted old Spanish music. A flamenco dancer spun and twisted in the street, the folds of her dress vibrant against the night sky. 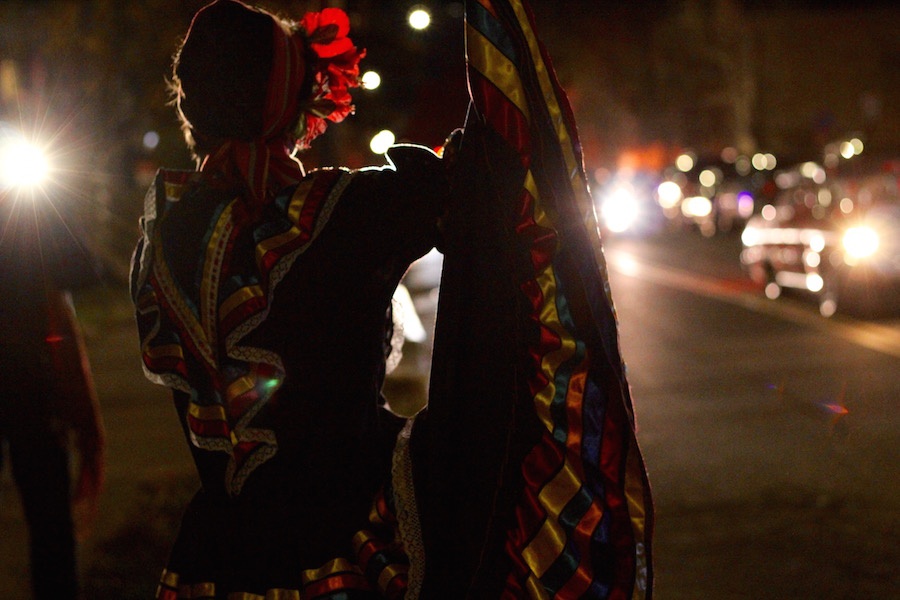 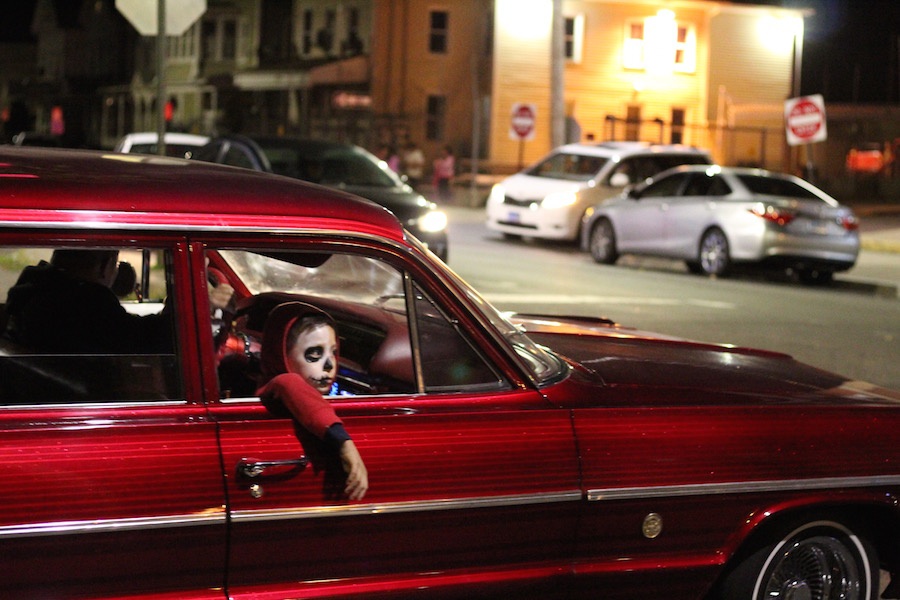 On Ferry and Exchange Street, they stopped for a moment of silence, to honor a sex worker who was killed in that spot. The band fell silent, members bowing their heads. A few friends reached out to hold each other. From the sidewalks, families watched, straining to hear as Lugo explained why they were stopping.

But as the group rounded Grand Avenue, it picked up momentum. Michtom cued up a version of “Despacito” that he had rocked the parade last year, Suarez dancing not too far behind. People poured out of businesses on the block between Poplar and Fillmore Streets, where businesses sidle up to each other shoulder to shoulder.

A few marchers trickled into Cositas Deliciosas for sustenance before they reached Bregamos. Outside the shop, friends Amy Gonzales and Nancy Lopez agreed that it had been worth stopping mid-bite through their tongue tacos to watch a bit of the parade. Both first-time spectators, they said they would return next year if they’re around. 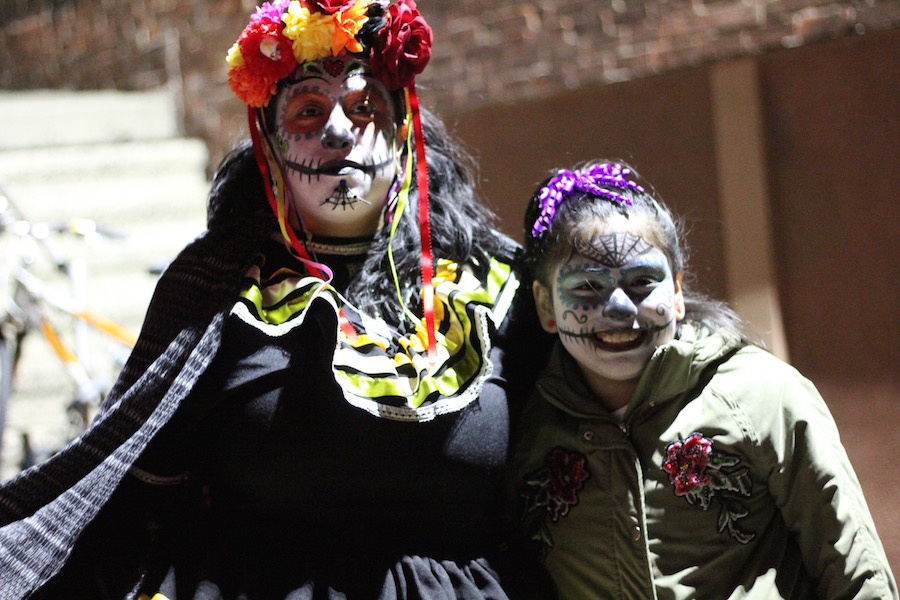 As the parade reached its final stages, a handful of people waited to usher the marchers inside, ready to party after a mile and a half out in the cold. Perched on a ledge, Tony Davis and Anna Eisenstadt waved as many headed into the space, their hair blowing in the wind.

“It’s an ancient day that always celebrates your family and always celebrates people who have passed, but this celebration especially now is a way to memorialize people and make sure that we know that we’re still fighting for them,” Eisenstadt said. “That they’re still present in our minds.”

Down the driveway at Bregamos’ outdoor stage, Circo Ollan’s performers had begun to set up for the night’s acts—juggling and dancing around fire. Back outside, Guadalupe Carmona and her daughter Guadalupe watched as marchers carrying a sanctuary city brought up the rear. After immigrating from Tlaxcala, Mexico 17 years ago, Carmona said the parade brings a little bit of home to her, at a time when she can’t go back to celebrate with family.

“It’s really good for me, and I almost cry because I miss my country,” she said. “I miss it so much.”

To watch and listen to more from the parade, click on the video below.