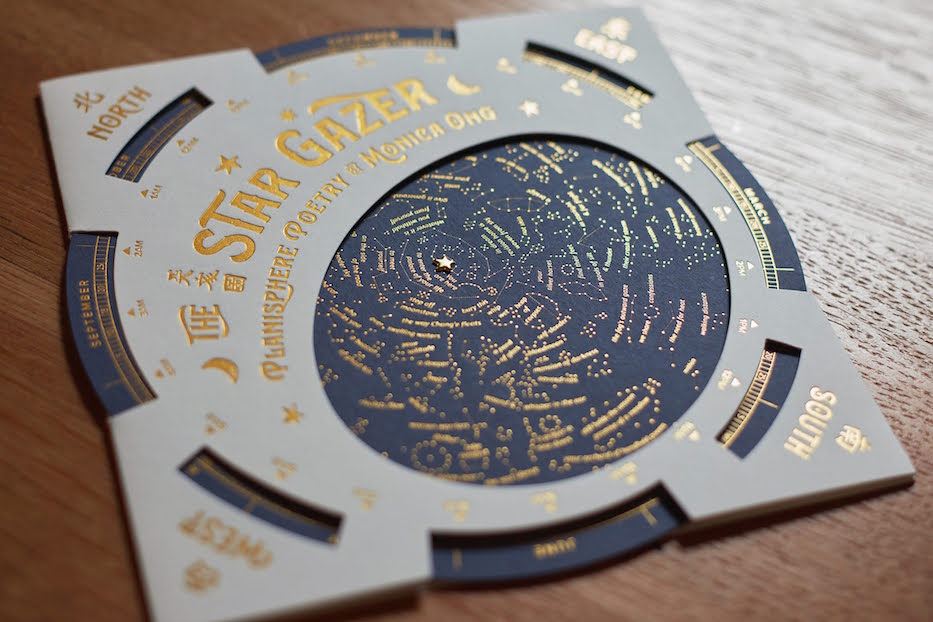 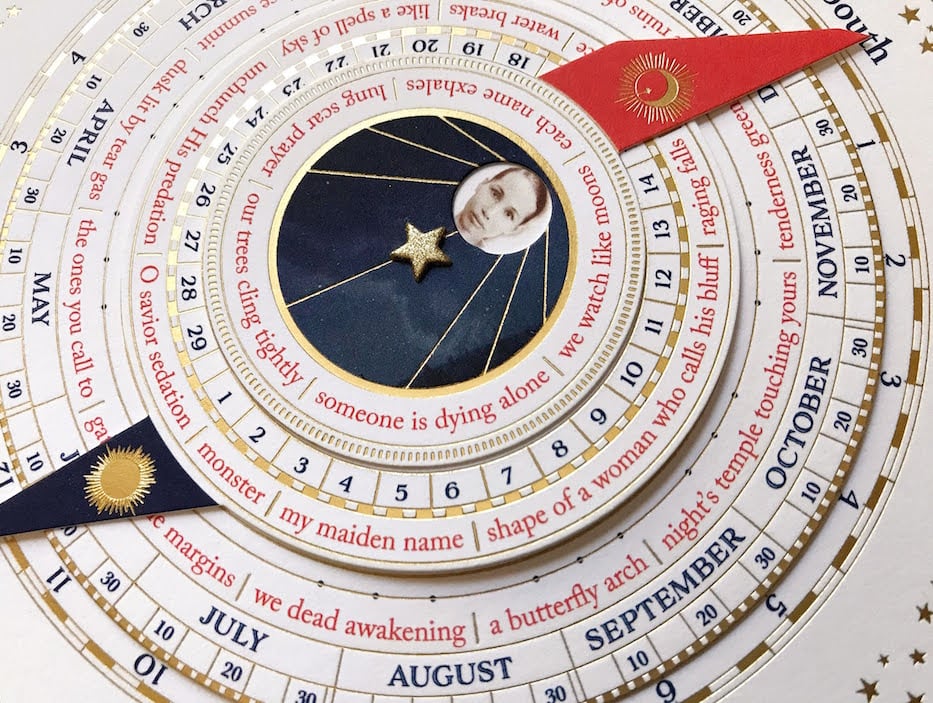 Monica Ong’s exhibition Planetaria opens with a bird. At the needle-nose top of the black, typewritten text formed in the shape of a rocket begins the phrase, “It is I, seagull.” On June 16, 1963, Russian cosmonaut Valentina Tereshkova, the first woman in space, radioed this message from Vostok 6. From a nearby case, a viewer learns that a reproduction of a small child embedded within the rocket is a relative of the artist.

The silhouettes of seagulls fluttering around the bottom of the rocket blur into small text that reads “to be seen, to be seen.”

Ong’s print Seagull (2020) emphasizes the theme of visibility—particularly, how humans see themselves within their visions of the cosmos. As the exhibition title implies, Ong has constructed a space for viewing maps of the solar system. From medieval volvelles to Tarot cards and Chinese astronomy, Ong reinterprets various representations of celestial bodies and other cosmological forms. She injects a feminist and highly personal narrative into the works collected in her solo show at The Gallery Upstairs at the Institute Library through Sept. 8. 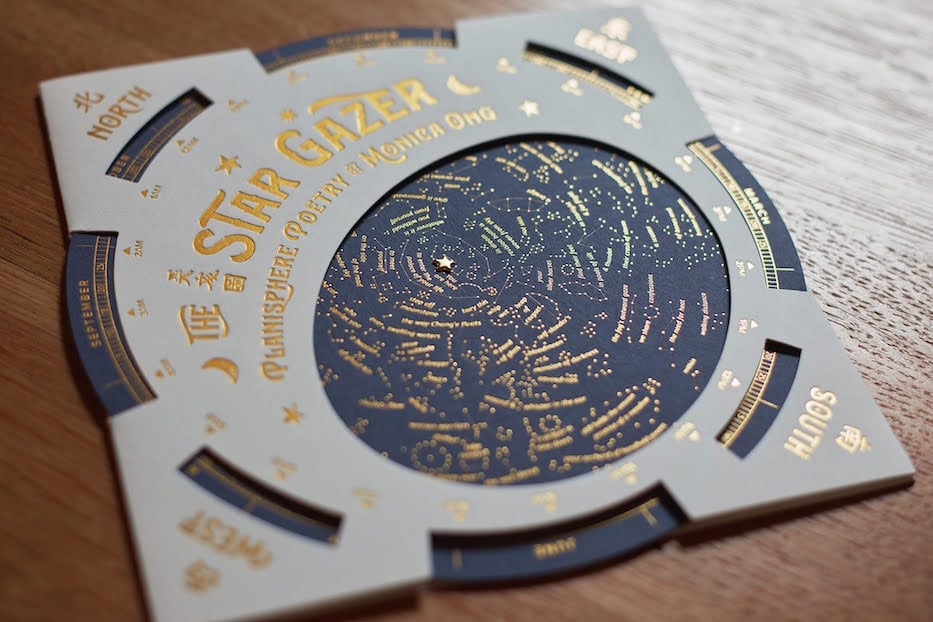 Many pieces within the show and elsewhere in Ong’s publications, such as her book Silent Anatomies, waver between poems and artworks. Text is central to Ong’s work, with multiple readings of her pieces slowing a viewer’s pace. Shadow boxes, a custom-made slideshow reel, prints, video, and a book cart of inspirational texts merge words and imagery. Taken as a whole, Ong’s idiosyncratic practice resists categorization as she straddles a hybrid career within the fields of poetry and visual art.

In the center of the exhibition, a freestanding case provides insight into Ong’s process. It also informs the context of her work as a self-described “visual poet.” Near a small archive of family photos, Ong infuses a celestial bent into her family history. After World War II, Ong’s grandparents fled Southern China, settling in Manila, Philippines. She connects their journey with cosmology, explaining “As a daughter of diaspora, I think of them as the first cosmonauts in my family, their crossings and migrations also guided by stars, by the pull of something greater than themselves.”

Her family reappears in her Lunar Volvelle, in the face of her paternal grandmother. The face emerges with pieces of poems that shift with the rotating paper disks.

The mysterious pull of the beyond spirals from a glowing amber circle in Diaspora Nova, one of four vertical, wall-mounted shadow boxes in the show. Curving along the bottom of the composition, a golden italicized font asks “when will you burst into the splendor of your miracle arrival?” hinting at Ong’s journey as a mother. As an artist and a parent, Ong alters cosmological narratives that have prized a male perspective. She favors intersectional viewpoints, not only for herself, but also for her son and for other marginalized voices.

In her foil-stamped print Purple Forbidden Enclosure, Ong adopts the constellations of the Chinese northern pole, but she replaces each asterism with important potential markers from the life of a woman. With serpents lurking and a shifting canopy of clouds, Ong highlights the delicate and at times, dangerous, nature of the path.

As with Tereshkova, Ong centers female scientists and cosmonauts. Viewers can scroll through a custom reel of imagery and text in Her Gaze, a poetic homage to the 18th century German-born British astronomer Caroline Herschel. Along an adjacent wall, Ong has created pages from a lost astronomy textbook. On pre-treated antique paper, she appropriates vintage illustrations of astral figures such as the moon and comets. She scraps scientific captions for oneiric descriptions as she envisions a woman’s place within a new universe.

Planetaria tackles a perennial topic for feminists—the body. But Ong launches hers upward to the stars. She supplants the corporal obsessions of past feminist artists with a cosmic and universal vibe. This interstellar thrust allows Ong to grapple with womanhood and motherhood through her retellings of inherited legacies.

By layering new narratives onto celestial maps and charts, many borrowed from her culture, Ong invites a multiplicity of meaning. The fragments of text that swirl around her compositions allow a viewer to create numerous versions of her poetry, returning to the lofty imagery of her work anew. As Ong aids fresh readings of limited origin stories, the future’s cast expands.

Monica Ong: Planetaria runs through Sept. 8, 2021, at The Gallery Upstairs at the Institute Library, 847 Chapel St. To find out more about the gallery’s hours, visit its website.