Kallos Musicians Step Out Of The Darkness 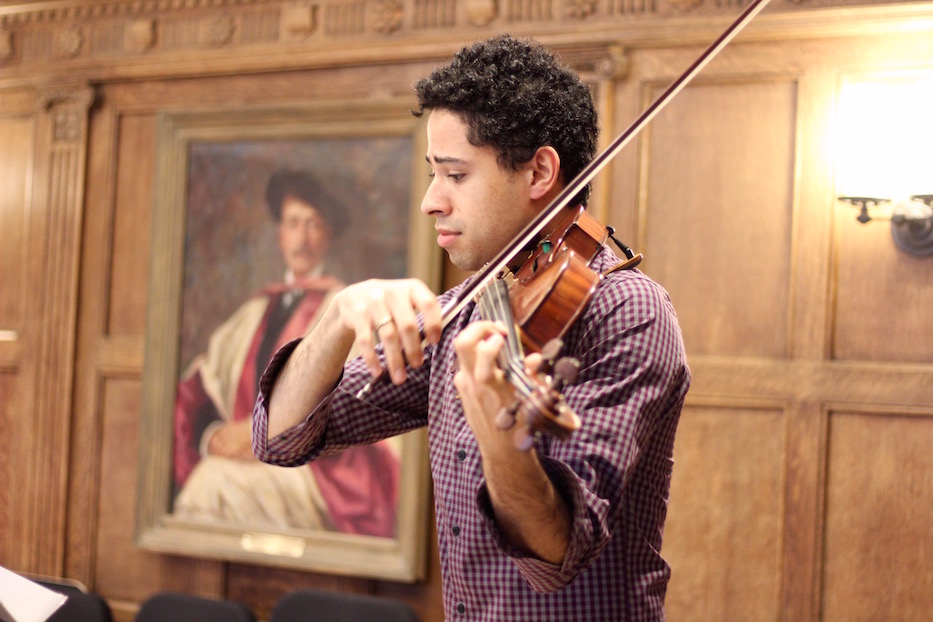 Somewhere on the fourth floor of Leigh Hall, composer Frank Bridge had come back to life. At a music stand, mezzo soprano Chloë Schaaf dove in, her voice a round, growing bloom in the springtime. Jordan Bak’s viola wailed in response and continued to climb. A flurry of piano keys rolled out beneath it. Bak breathed in deeply and pulled the bow back towards his chest, letting a final note hang in the air.

“That was just so beautiful,” he said, cracking a huge smile. “He’s just brilliant.”

This Friday, the three musicians and cellist Julian Schwarz will present “Out Of Darkness,” the latest concert from the Kallos Chamber Music Series and first of 2020. The performance marks a full year of concerts for the series, which has branched out from piano trios and quintets to include concerts with a four-cello ensemble, viola, and now the addition of vocal chamber music. 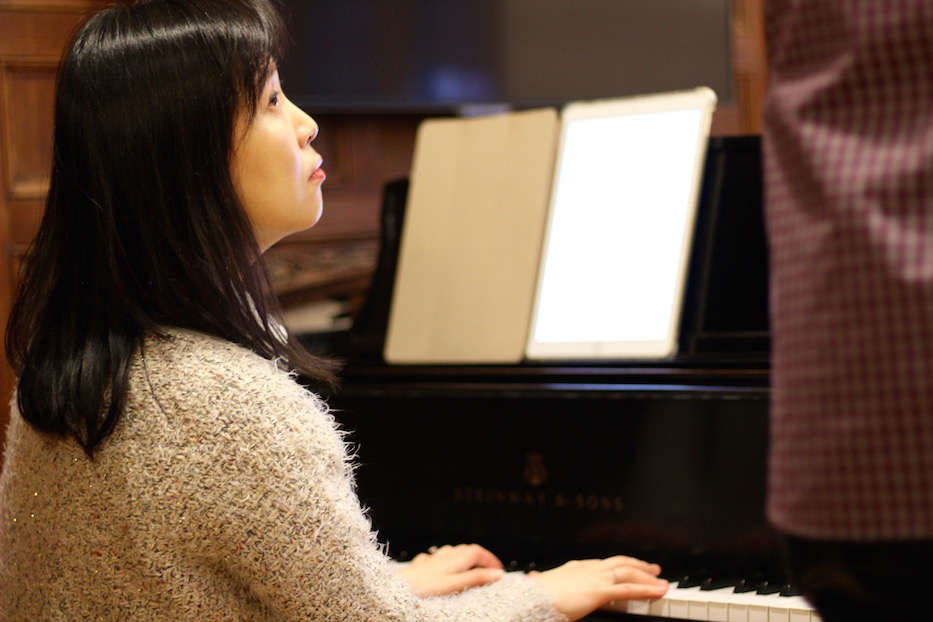 “I think we are creating a rare connection between musicians and members of the audience,” said Minyoung Kang, who founded Kallos last year to create an intimate space for chamber music in New Haven. “I could feel it starting to happen at the last concert. It’s like a play—a lot of stories are happening behind the music.”

Kang—whose enthusiasm for chamber music is as contagious as it is effervescent—remains a constant onstage and behind the scenes. The series has continued to evolve around her, including moving from Westville to East Rock after its original spot at Lyric Hall went on the market last year. This latest iteration is no different: she has enlisted the help of musicians Bak and Schaaf, while also slipping in an intimate look at Beethoven during worldwide celebrations of his birth.

At a recent rehearsal, sound filled a wood-paneled practice room, bits of Bridge and Loeffler starting and stopping and starting up again. As musicians took up Bridge’s work—three songs inspired by death, carried by Schaf’s mezzo soprano—they transformed into magicians, conjuring a world where past could meet present.

To Schaaf’s declaration of Ah, calm me! restore me/And dry up my tears, Bak obliged, a cry loosed right from the core of his viola. Kang watched him intently from the piano, her hands criss-crossing the keys as she played. As the music swelled, breath filled the room, deep and musical itself. When they switched out of English for Loeffler’s work, something sweet and sharp appeared at the edges of Schaaf’s voice, ready to transport the audience. 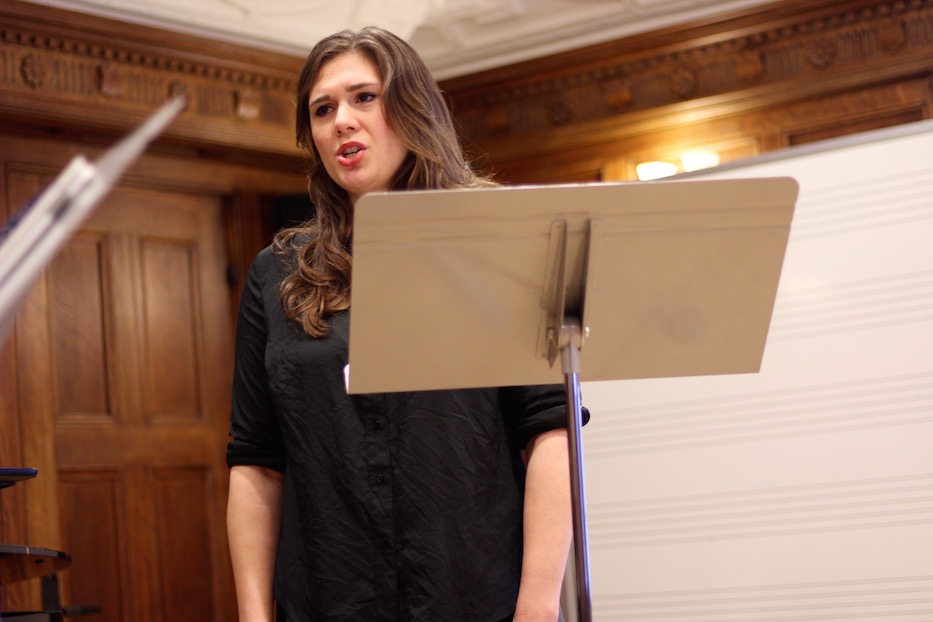 For Kang, the addition of mezzo soprano to the concert is an exciting one. Praising the human voice for its range, she said that she delights in the interplay and dialogue between Schaff and Bak, in which she is both an active participant and an intermediary.

“It gives our audience a chance to taste different colors and different chemistry between instruments,” she said. “Especially with voice. I think it will add another layer, because I think voice is the most amazing instrument. I think it can be really, really beautiful.”

In honor Beethoven’s 250th birthday year, Kang and Schwarz will also be performing the composer’s 7 Variations on ‘Bei Männern, welche Liebe fühlen', WoO 46, in which Beethoven has put his own spin on Mozart’s The Magic Flute. In a structure that runs parallel to the opera, Beethoven has adapted an aria sung by Pamina and Papageno, letting the instruments do the talking.

The piece, which is just 10 minutes long, unravels as a joyful and measured back-and-forth. The instruments jump right in, sweet and tame with reserves of playfulness waiting in the wings. The voices dance around each other, balletic as they call out and respond. It’s not long before one hears the flirtation in it: two people spouting off on the merits of love, with piano that reaches out to tickle the cello by the two-minute mark. But there’s also depth and drama there, both instruments reaching into the depths of their emotion to pull something out.

It was initially intended for small salons, where the audience could follow the chatty, emotional conversation that unfolds between the instruments. Kang said she sees it as an example of how a composer known for his sweeping orchestral compositions had a more personal side to his work.

“In writing a chamber music piece, composers have to turn inward,” she said. “They have to look for their most personal message. So it’s often the chamber music where composers experiment with their ideas, and where they are more free in terms of form and gesture. Beethoven wrote brilliant, magnificent orchestra pieces on a big scale. But I think it is in his chamber music that we find his best and most personal language.”

She added that the work, with other pieces that the group will perform, is just one of the reasons she’s excited for the concert. One year in, the series has still struggled to get the word out about what it does and why chamber music still matters. At a concert in December, she said she could feel something shift, a certain electricity as the audience hung on to each note. She hopes to continue that as Kallos moves into its second year.

“Chamber music, I think it’s magic,” she said. “Small scale, there are just fewer people on the stage. You can really see individuals respond to each other. Sometimes they laugh, or do certain gestures. We are constantly looking at each other. That’s the magic. Listening to peoples’ dialogue.”