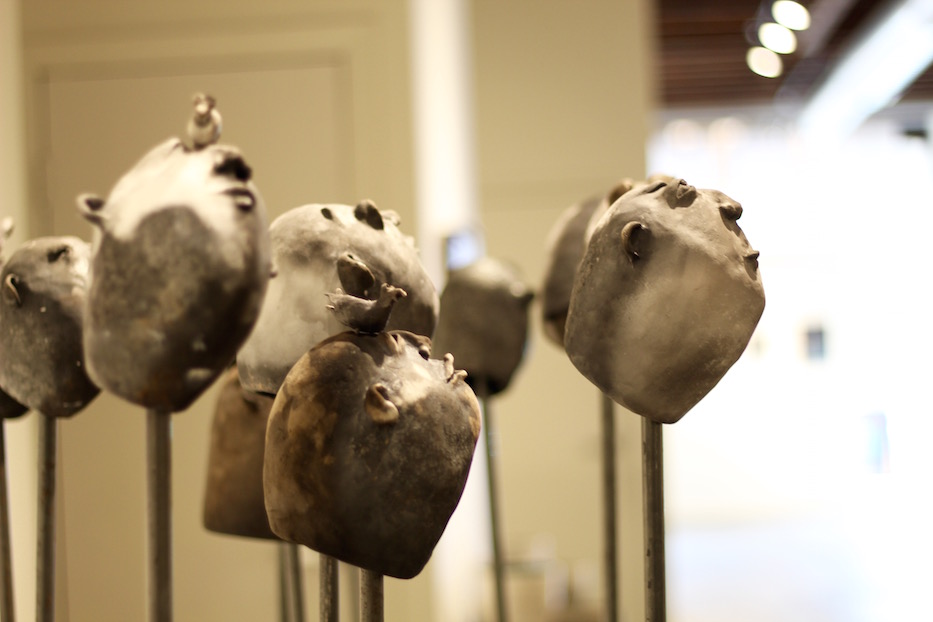 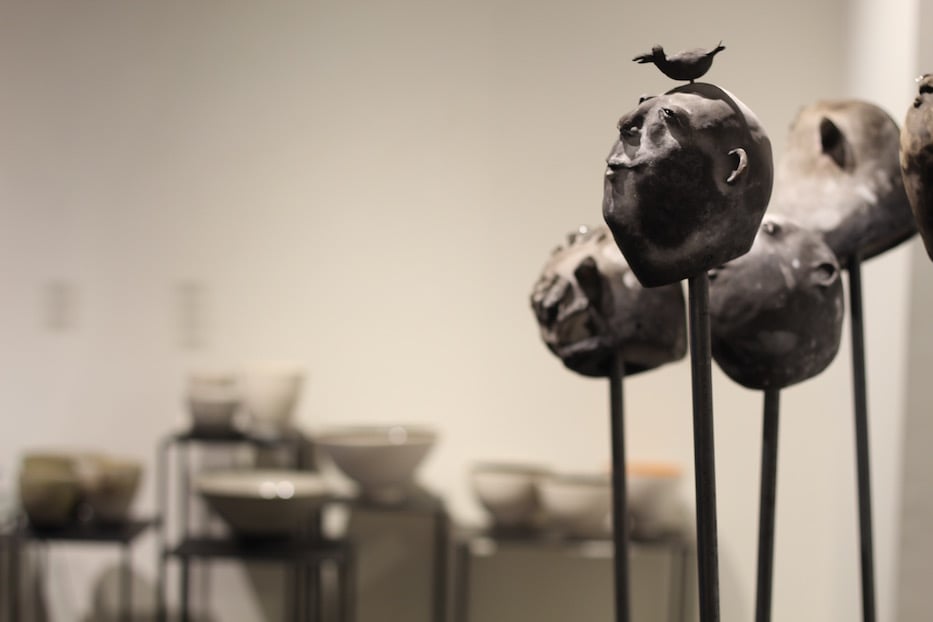 The figures turn their faces to the sky, eyes wide and wondering. Their cheeks are full, their heads round with dainty ears. In the front of the pack, one head rotates in place, thick, knotty fingers spanning its chin. Another smiles a long, tired sort of smile, completely unperturbed by the small bird on his brow. Another lifts its chin heavenward, lips gathered in a tiny O.

Amanda Duchen’s ceramic dreamers are part of Looking Up!, a joint show from Duchen and painter Chris Ferguson running through May 9 at Kehler Liddell Gallery. Installed in the first weeks of spring, the exhibition welcomes viewers with vivid color, local landmarks, and a deep sense of whimsy, suggesting that there might indeed be brighter days ahead.

The Westville gallery is open Friday and Saturday from 11 a.m. to 2 p.m. and by appointment. Hours and more information are available here. 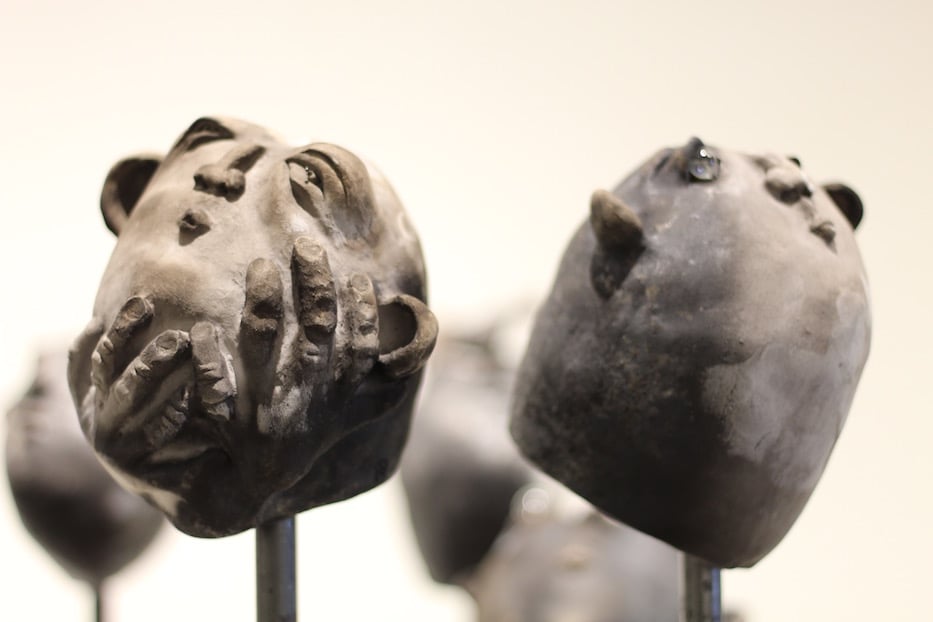 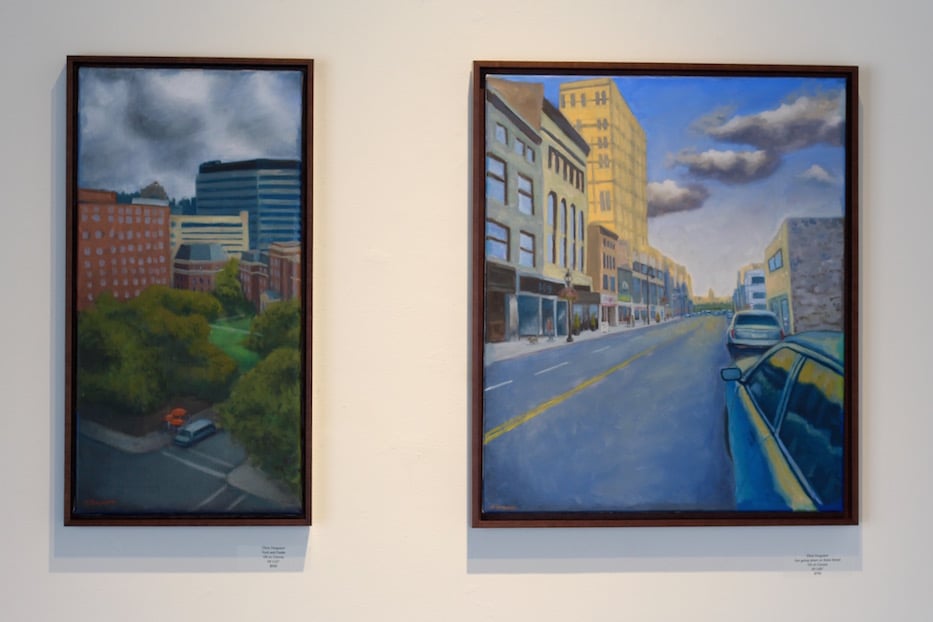 The works set a hopeful tone from the moment a viewer walks through the door. In the front half of the gallery—the long space has been smartly separated by a partition—Ferguson plays a sort of New Haven-themed show and tell. Through over a dozen works, he guides viewers through downtown, onto the Farmington Canal, down Chapel Street, and out onto the city’s Long Wharf and marsh land. He doesn’t stop there: there are warm, sandy beaches, lush farmland, and a haloed, out-of-focus portrait of the Q Bridge. Anyone who has been a bleary-eyed driver in New Haven—or marveled at those blue lights against the night sky will recognize it at first glance.

In this world, sites are still largely unscathed by the pandemic: yolky sunlight falls over Chapel Street and filters through the heavy autumn leaves that hang overhead. Families walk by with backpacks on the way to or from school. JoJo’s still stands open, with its cheery red window decal and hot coffee waiting inside. In two canvases, East Rock and Hamden come alive with red and yellow color, a reminder of crisp, fall months when viewers are on the lip of spring and summer. 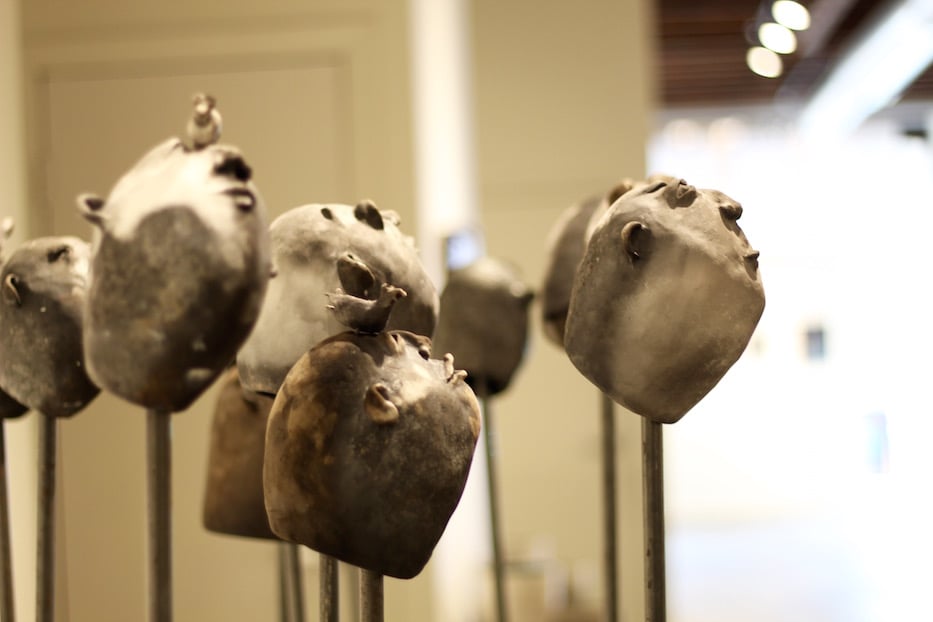 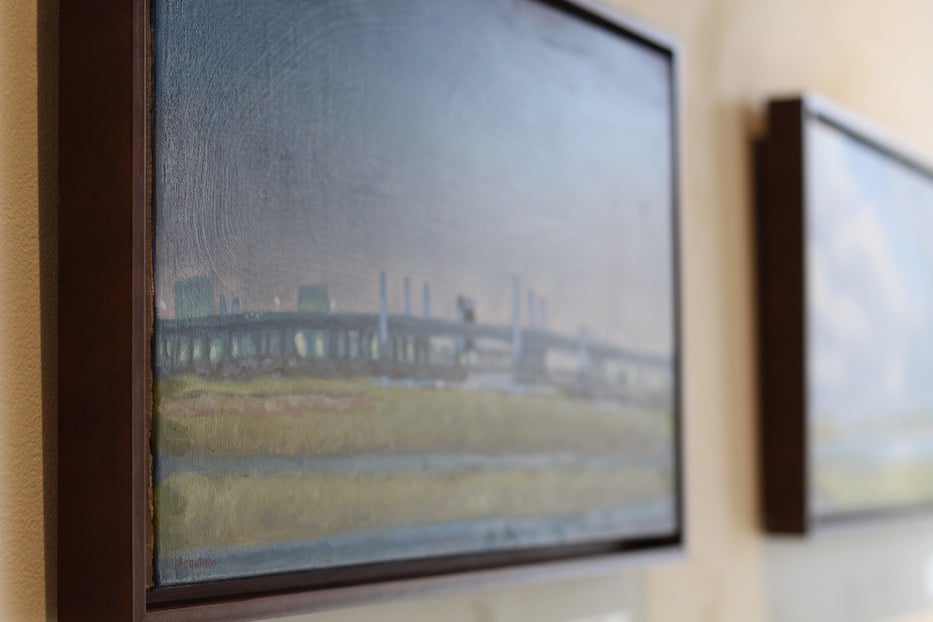 Top: Some of Amanda Duchen's dreamers. Bottom: Work by the painter Chris Ferguson.

It would be a mistake to assume that Ferguson is largely uninterested in people: the human-ness of his brush is as much a part of his canvases as his eye for color and interest in its ability to bring a well-loved space to life. On one wall, a portrait of a young, smiling girl blowing bubbles catches a viewer off guard, her wonderment palpable. On another, his Beach Baby delights in the details of a child’s day at the beach, her sandy play captured in four oil-on-board vignettes around a central image.

At the center of the board, the same little girl stands hand in hand with her guardian—Is it her mother? Maybe her grandmother?—looking out into the blue water. There’s a kind of peace there, sand sun-kissed and smooth as the water reaches out to the horizon line. Her little feet dig in, head bowed toward her shadow.

That kind of thrill also flows through Duchen’s works, a collection of ceramic figures and glazed wares that fold in a playful, often poetic elegance of form. In hanging works from her Porcelain Tendril Collection, she plays with weight and heft of her substrate, asking a viewer to look once (or twice) from far away, and then come closer. From across the gallery, the porcelain looks feather-light and luminous, as though the tendrils might in fact be cherry blossoms, ready to drop at any second. They only become more delicate, and differently alive, the closer one gets to them. Her materials are just as interesting: the tendrils hang from twig, bead and wire chandeliers. 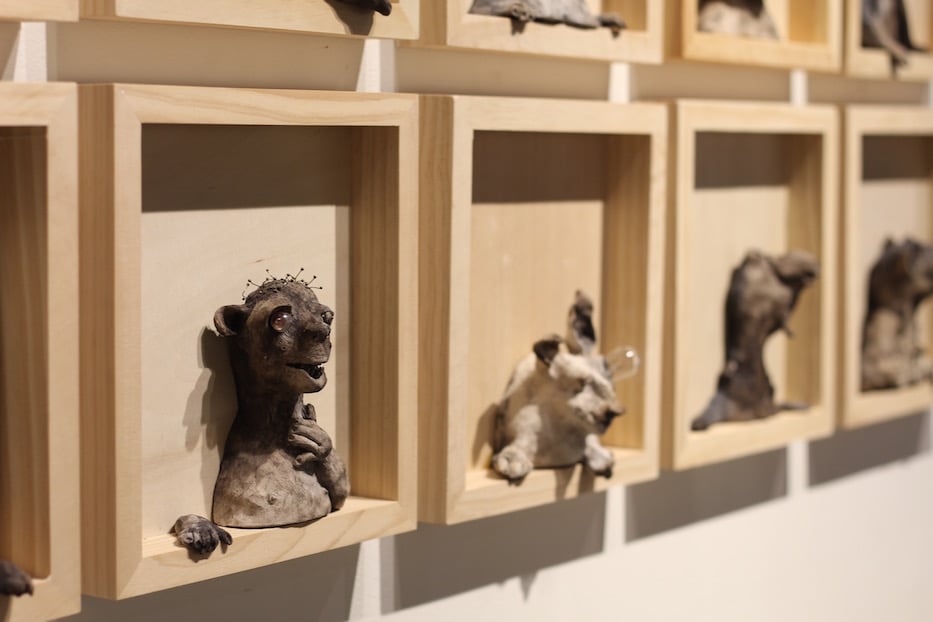 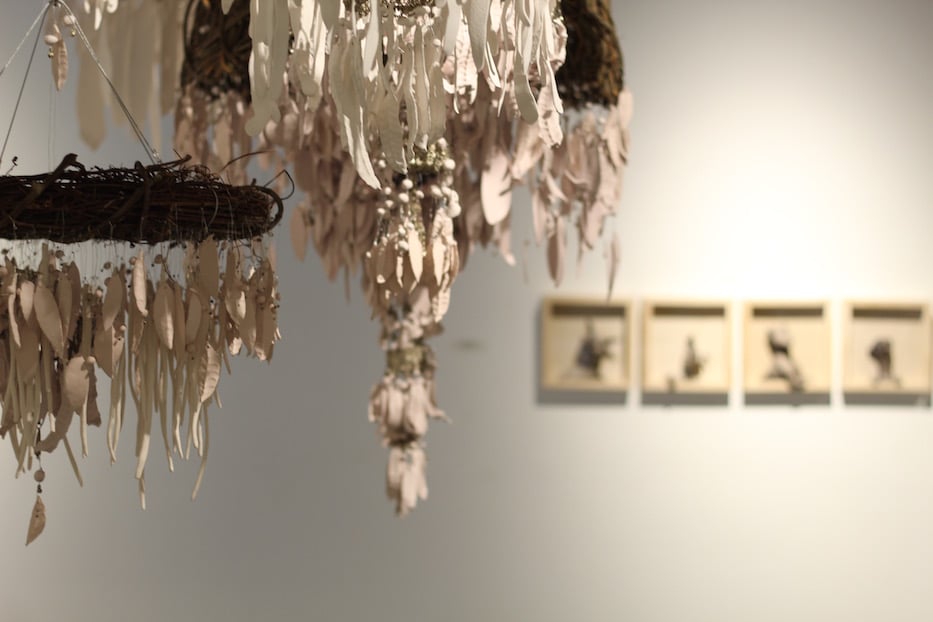 Beyond the tendrils, she has rolled out and expanded a Clay Menagerie collection that she first exhibited in the first weeks of 2020, during a showcase for new artists at the gallery. The grouping is eye-catching for its sense of macabre-meets-fairytale experiment. Some creatures are wonderfully curious, as if they have stepped right off the set from a Tim Burton or Guillermo del Toro film and into the gallery.

Across two walls, animals come to life with flat, glistening button noses, tiny light bulbs for eyes and nails sinking right into their once-soft skulls. A rodent grins at the viewer, pins protruding from the crown of his head as he lifts a paw to his chest. A dog cocks his head to the side, one long ear flopping and exposed. A Billy goat nibbles his own tongue as his face sticks out from the wall. His right eye is a doll-sized bulb, stuffed with what appears to be steel wool.

While the artists are largely separated into two halves of the same gallery, they have a sort of cross-talk, their works chattering hopefully about the sunshine and bursts of green and pink sprouting outside. When cars pass by on Whalley Avenue, Ferguson’s work is a sudden reminder that Chapel Street is just a mile away. For viewers struggling to suspend their disbelief, Duchen’s work is an intervention telling them that it is still entirely possible. Together, they give a viewer a reason to look up—first at the work, and then at the city around them. And perhaps, too, to look at the season ahead.

Kehler Liddell is located at 873 Whalley Avenue. Hours and more information, including the gallery’s “date nights” with RAWA, are available here.