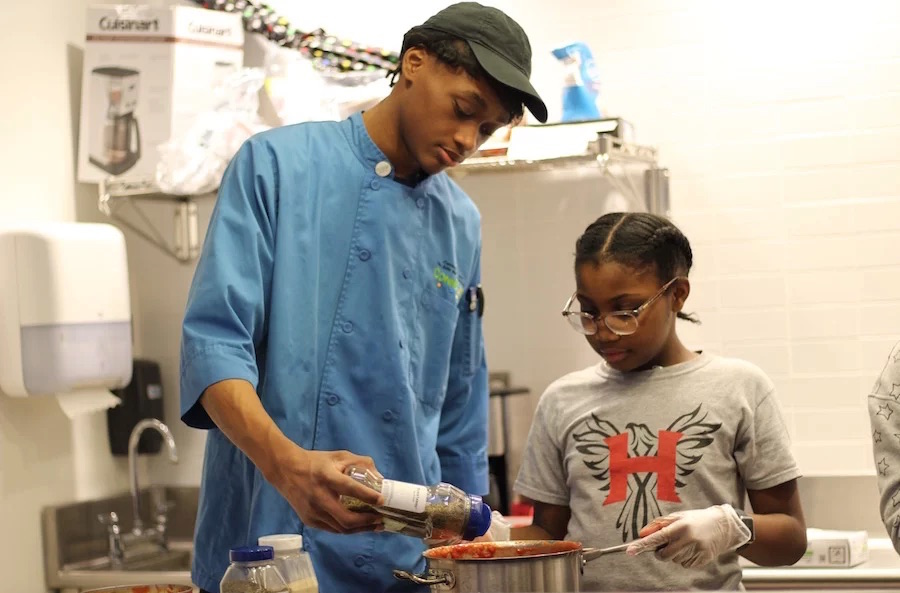 First it was his mom's Fair Haven kitchen, where three or four ingredients could transform into a cake at any moment. Then a minor addiction to the show MasterChef, where an imperious lead could take on whole culinary worlds with his starched, buttoned white chef's coat and quick-chopping hands. And then a high school classroom, where a mentor's constant nudging turned up the heat—and led to the realization that cooking could be a career choice.

That's the story for Jovon "Chef JoJo" Alston, a soft-spoken 19-year-old who graduated from the Connecticut Center for Arts & Technology's (ConnCAT) culinary arts program last year, and stayed on to run ConnCAT's Orchid Cafe and after-school "Cookology" classes. A Fair Haven native, Alston grew up watching his mom cook, their shared meals becoming a chance for his family to hit pause and catch up with each other around the dinner table.

By high school, he had fallen in love with the show MasterChef, taping episodes so he could watch uncompromising lead Gordon Ramsay bring even seasoned chefs to their breaking point. He found himself pitching his skills to the restaurant management team at Wilbur Cross High School, joining his senior year. As the team advanced in the ProStart Invitational, a cooking championship that it ultimately won on both state and national levels, he was still debating whether college was the right place for him to go next. And then he went on a tour of ConnCAT, which had finished its new industrial kitchen and cafe in 2017. Something clicked. At 17, he was the youngest student the program had ever had.

"I literally walked straight into the doors and into ConnCAT right after a month of summer break," he recalled in a recent episode of "Kitchen Sync" on WNHH Community Radio. "I wasn't nervous, because I knew I got in for a reason. I knew my teachers accepted me for a reason. So I really don't let anyone get to me."

At first, his classmates gave him flack because for his age. Alston shrugged it off. Instead, he said, he imagined that he was a human sponge, ready to absorb as much information as his brain would take. Under Chef Jenna Martin, he turned out dishes he had never made before—shrimp scampi and creamy Alfredo with flecks of parsley, layer cakes with bright, smoothed frosting, carefully plated hors d'oeuvres that glittered under the kitchen's lights.

After graduating, Alston said, he knew that he had two choices: to "build on the foundation I already have, or go the extra step to elevate myself in another way." He chose the second, staying at ConnCAT to teach while also enrolling in courses at Gateway Community College. As he begins courses there, he said several of his lessons have also come from the culinary classroom—like the time his students experimented with hot sauce in Rice Krispie treats, and proclaimed the results innovative and delicious.

Now, he added, "what's next is really a question mark for me." After his time at ConnCAT, Alston said he's interested in serving in other kitchens, working his way up to chef de cuisine before entertaining the dream of opening a restaurant or bakery.

"My end goal is just always success," he said. "I feel like every cook has always had the thought of like, 'when am I gonna open my own business?' So that's definitely not out of the picture. Whether that's me like selling dinners out of ... renting out someone's kitchen and prepping in there or just working at some other person's restaurant or establishment, I don't know yet. So we'll see."

To listen to the entire episode of Kitchen Sync, click on or download the audio above. This piece comes in part through The Arts Paper's content sharing partnership with WNHH Community Radio and its longstanding news affiliate, the New Haven Independent.