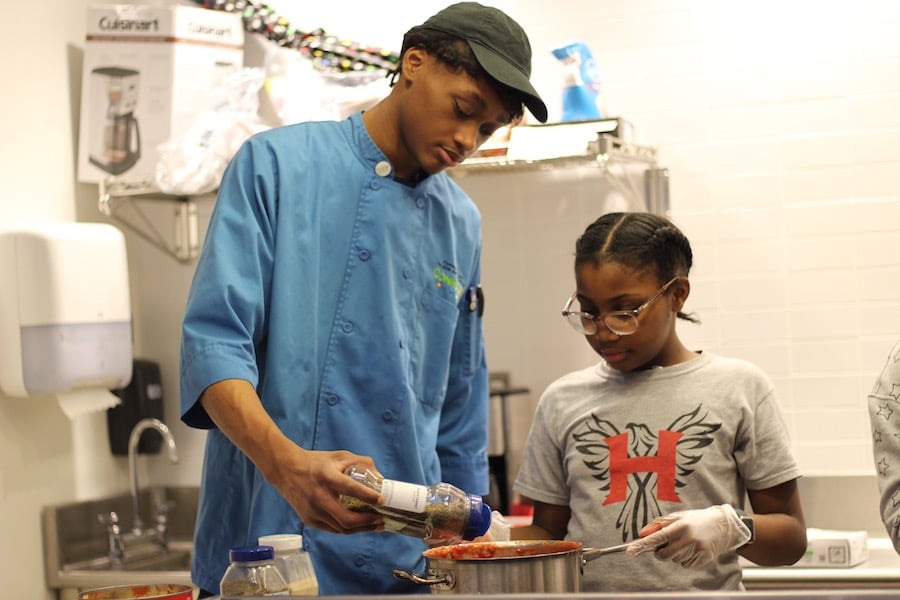 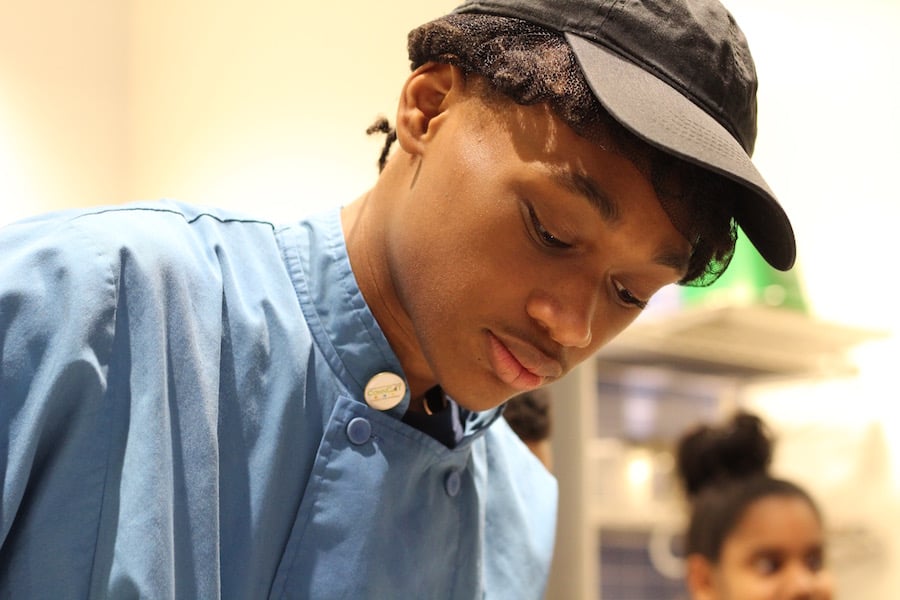 Creamy sauce day wasn’t going the way Chef JoJo had envisioned. At the stove, Dior Hobson had the Alfredo bubbling away, but it seemed too thin for the 15-minute mark. A nest of noodles that the class had cranked out the day before didn’t look quite right either. And at the center of the counter, a debate had exploded on the merits of crushed tomatoes over white sauce.

Those disagreements are customary for Cookology, part of a growing after-school program at the Connecticut Center for Arts and Technology (ConnCAT) in New Haven’s Science Park neighborhood. In addition to classes in digital arts, agriculture, theater and STEAM subjects for fifth through tenth grade, cooking has been added to introduce students to basic culinary techniques that they can take home with them. The class is taught by 19-year-old Jovon “Chef JoJo” Alston, a graduate of ConnCAT’s culinary arts program, with help from after-school assistant Troy Smith. 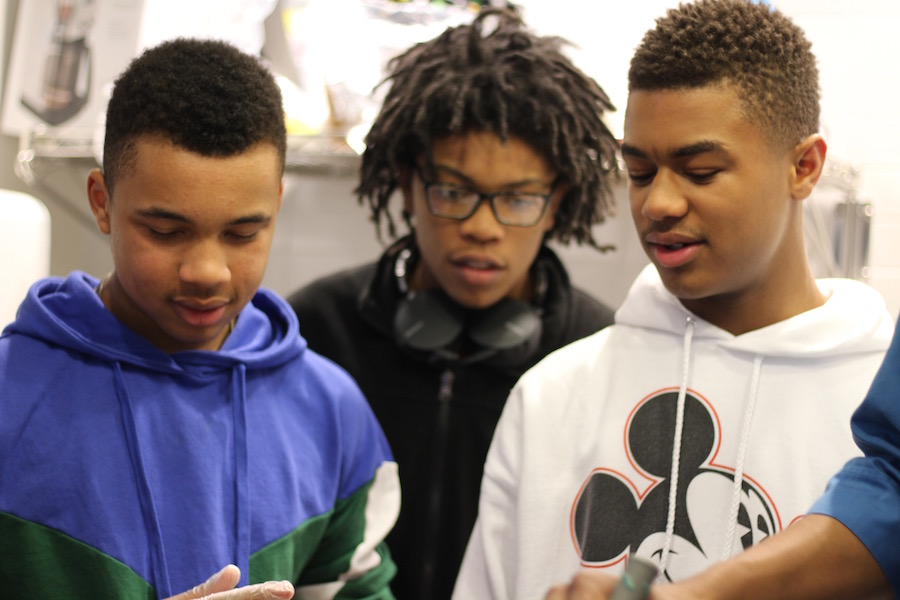 Cookology began, in part, because “most programs are exorbitant and can be a financial challenge for families,” said ConnCAT’s Youth and Community Programs Manager Steve Driffin. While ConnCAT was founded as a training center for unemployed and underemployed adults, staff wanted to add options for some of its youngest community members, who found themselves without anything to do after school.

That began two years ago, and has since grown with a full summer program and class options each day from 2:30 to 6 p.m. Classes are $25 for a semester, and taking students on a rolling basis.

This month, the group swung into the new year with new lessons in pasta, building on a culinary lexicon that has included pizza, omelettes, sausage, burgers, cake, and at least one experiment with rice krispie treats and hot sauce ("don't ask," Smith said, cracking a smile). Students meet Thursdays and Fridays, to have a prep day and a cooking day that culminates in a final meal before they head home for the weekend. 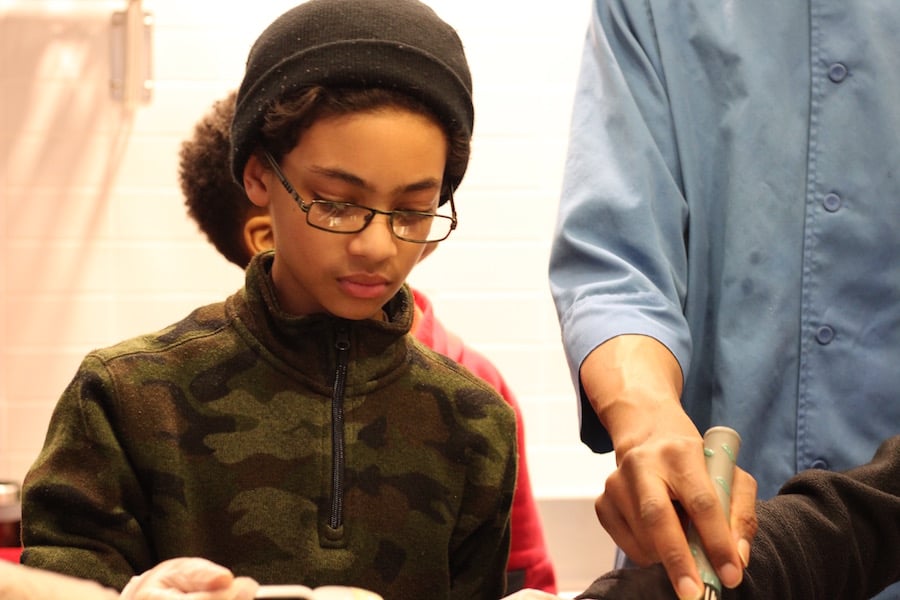 “I just love being part of this little community,” said Rivera, who attends Edgewood School and said her dream recipe is a calzone packed with bacon and mozzarella, browned just so at the edges. “This is like my little family. It’s a very strange crowd, but that’s what I like about it.”

That’s also true for Savannah Brooks, a freshman at James Hillhouse High School who said she finds cooking meditative, and jumps at the opportunity to help her mom in the kitchen. During the week, it doesn’t always seem like there’s time for it—she runs track, sings in a choir, and is learning guitar and piano. In the middle of it all, cooking centers her. If given the time to perfect any recipe she wanted to, she said she’d zero in on “the hard stuff,” learning to make a vanilla-studded crème brûlée from eggy start to caramelized finish with a blow torch.

“It’s just that I’m not always focused,” she said. “And food makes everyone happy.” 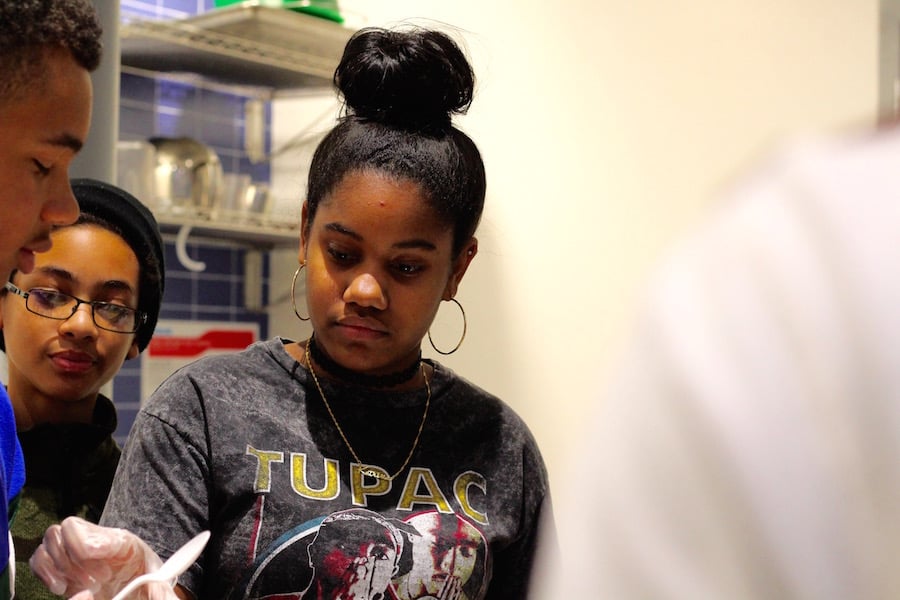 Even when recipes don’t go according to plan. As Hobson checked the sauce for what seemed like the tenth time, Alston gathered the class around the simmering mixture, off white with flecks of black pepper. He frowned as he dipped a spoon in and watched the sauce slide off in fat drips. He asked students if they could remember the word for what consistency he wanted to see.

“The term I’m looking for is called nappé,” Alston said. “It’s a French word. It means that the sauce is thick enough to stick to the back of the spoon.”

Alston is no stranger to learning the culinary ropes himself. A Fair Haven native, his first cooking lessons took place in his own kitchen, watching his mother scurry lovingly around the stove. As the middle child—Alston smiles instantly when he mentions his younger brother and older sister—he saw cooking as the thing that continually brought his family together, around the table long enough to catch up on what was going on in their own lives.

By high school, Alston was intrigued enough to join Wilbur Cross High School’s Culinary Management Team, a group that spent its afternoons racing the clock to make and plate three-course meals. He was a member of the team when it took first place at the Connecticut ProStart championships in 2017, and went on to take fifth place at the national championships in Charleston, South Carolina later that year.

In Cross’ team, Alston found his niche. By the time he got to his senior year, “I wasn’t sure that college was right for me.” Then he took a tour of ConnCAT’s Orchid Cafe and sprawling kitchen, an ocean of stainless steel, cast iron and fastidiously scrubbed floors and countertops. Something clicked instantly.

“It’s the feeling of being satisfied that I get to create for people,” he said, taking the Alfredo off the heat and adding a few handfuls of chopped parsley into it. Students crowded around him as he worked, hanging onto every word. 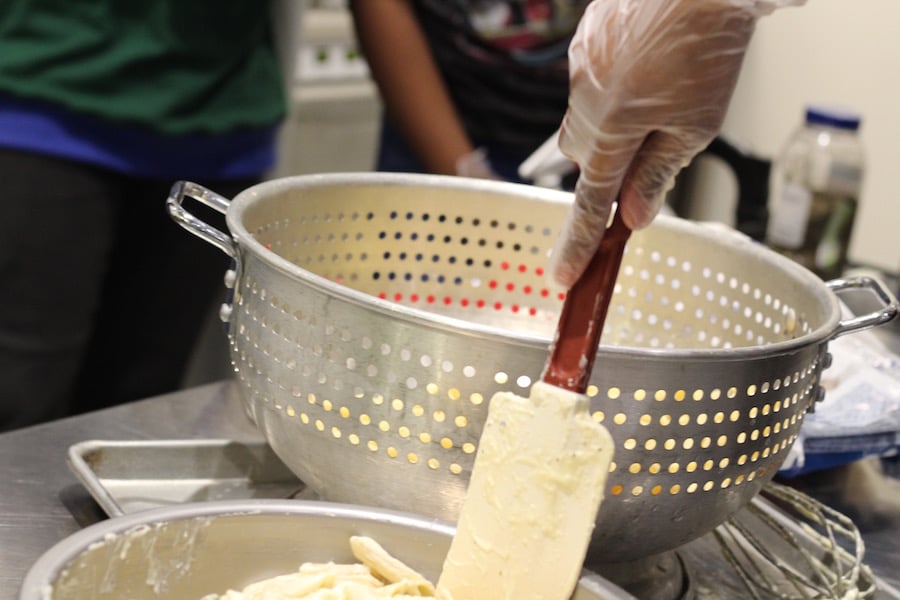 After graduating last year, he stayed on as staff at the organization’s Orchid Cafe, dedicating his Thursday and Friday afternoons to teaching. In the coming year, he plans to go on to another culinary program, currently in talks with Gateway Community College about their restaurant and hospitality management program.

As he’s gone from student to teacher, he said he’s also learned a great deal about making culinary compromises. As clean up time approached on a recent Friday, a parsley-flecked pasta Alfredo wasn’t cutting it. Calls for his red sauce amplified around the room. After vowing that he wouldn’t cave, he rummaged around and emerged with an industrial-size can of tomatoes, tipping it into a pan with both hands.

“I think it all depends on your taste buds and what you’re used to,” Rivera said. “ Chef JoJo’s tomato sauce is fire.” 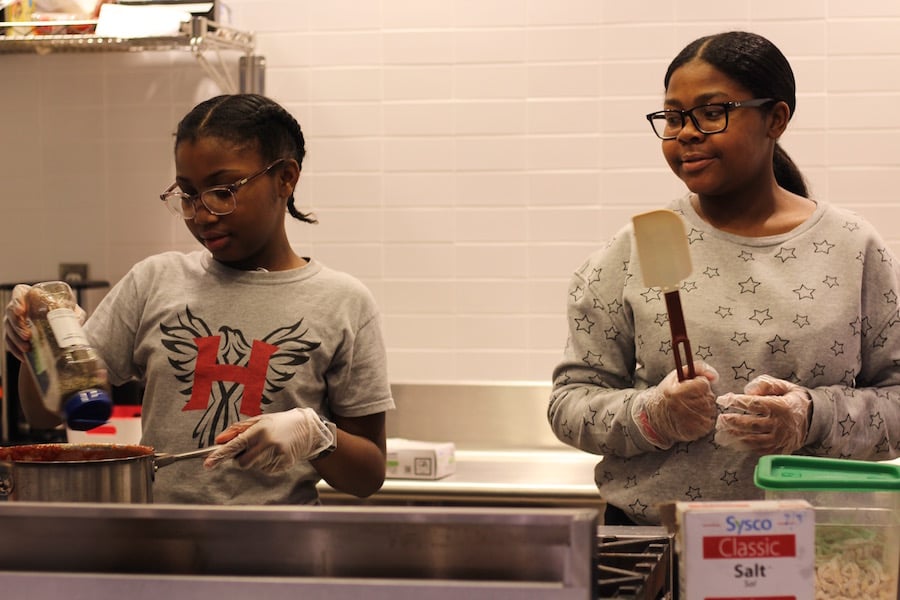 Alston worked furiously, cutting corners as the clock ran up against him. Typically, he said, he starts with fresh garlic, which infuses tomatoes with a kick. But there was no time for that. In the can of crushed tomatoes, powdered garlic, and salt. He handed off the stirring operation to students Kaliyah Tucker and Amaya Blount, who took turns in front of the bubbling red mixture. Blount, 12, is student at Betsy Ross Arts Magnet School who has started a small cupcake business out of her Meriden home.

Tomatoes aren’t exactly her ministry, she explained. At home, she’s used to whipping up lemon and strawberry cake mix from scratch each Saturday and Sunday, the only days of the week she doesn't have to get up at 6 a.m. to make the school bus. But the class at ConnCAT has piqued her interest in other savory recipes that she brings home with her, helping her dad in the kitchen when she has time.

“I try to learn everything I can," she said.