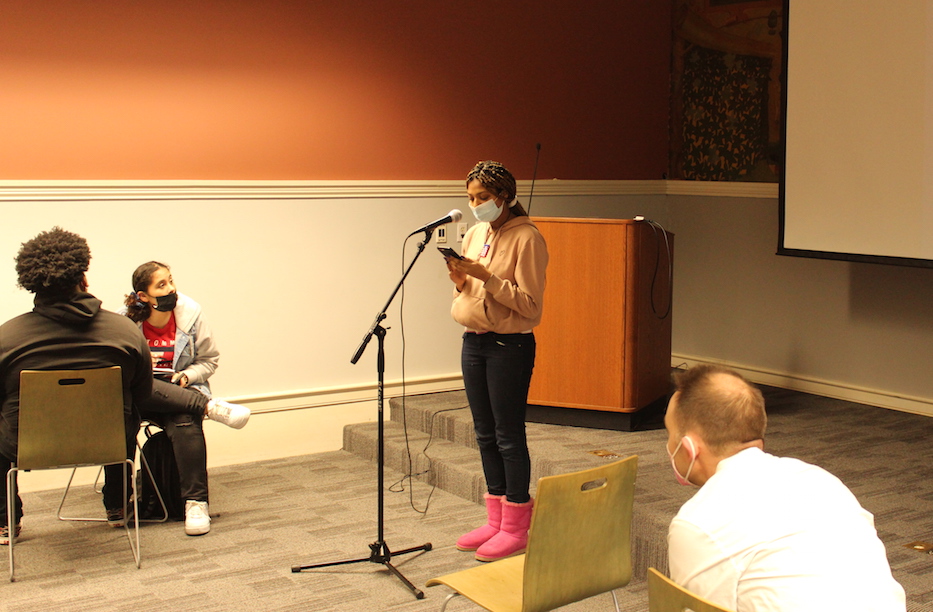 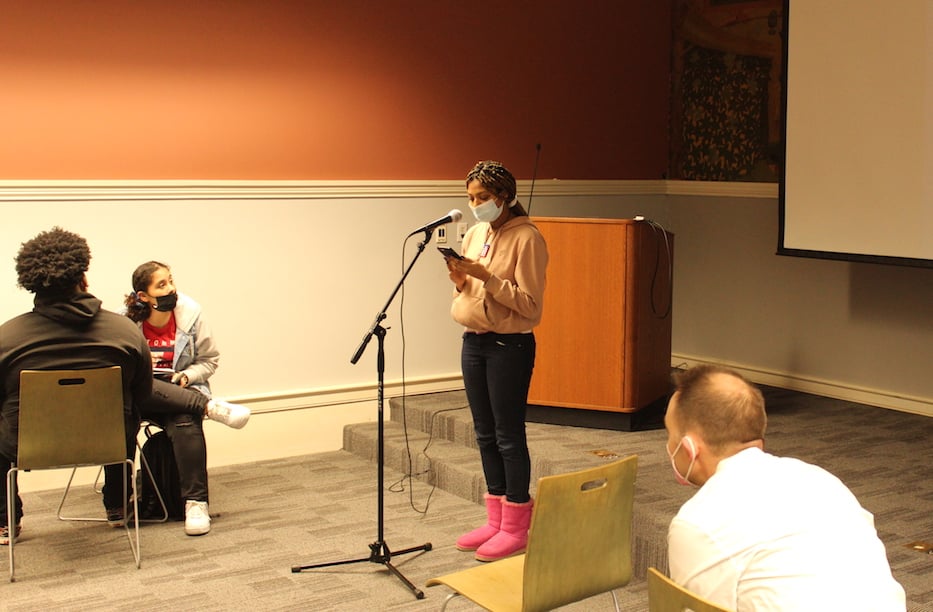 New Haven public high schooler Jayleen Nieves stood at the front of the room, her pink Uggs anchoring her to the carpet. For a moment, the room was quiet. Then Nieves’ voice began to carry through the microphone. She told a story of her high school, Metropolitan Business Academy, where a security guard allegedly responded to a stabbing between two students.

The room clapped and whooped, and Nieves returned to her normal speaking voice, describing the discomfort and lack of safety she felt as many security guards patrolled the school and rifled through students’ bags the day after the stabbing occurred (when reached for comment, NHPS Spokesperson Justin Harmon said that "a student was found to be in possession of a knife," but would not confirm the fight). The students at her school need greater access to mental health resources, not to security guards or armed SROS, she said.

Courage mixed with creativity this past Thursday, as the program room at the Ives Main Library pulsed with the energy of 30 New Haven public high schoolers, youth activists, poets, and educators. Backpacks at their feet, students sat in a scattered formation facing the stage, sharing ideas with one another, writing original poetry, and coaxing their classmates to the front of the room to perform.

From the ceiling the speaker system pumped out a low key hip hop beat, driving the students’ ideas forward. The event came together as a collaboration between The Word and Students for Educational Justice. 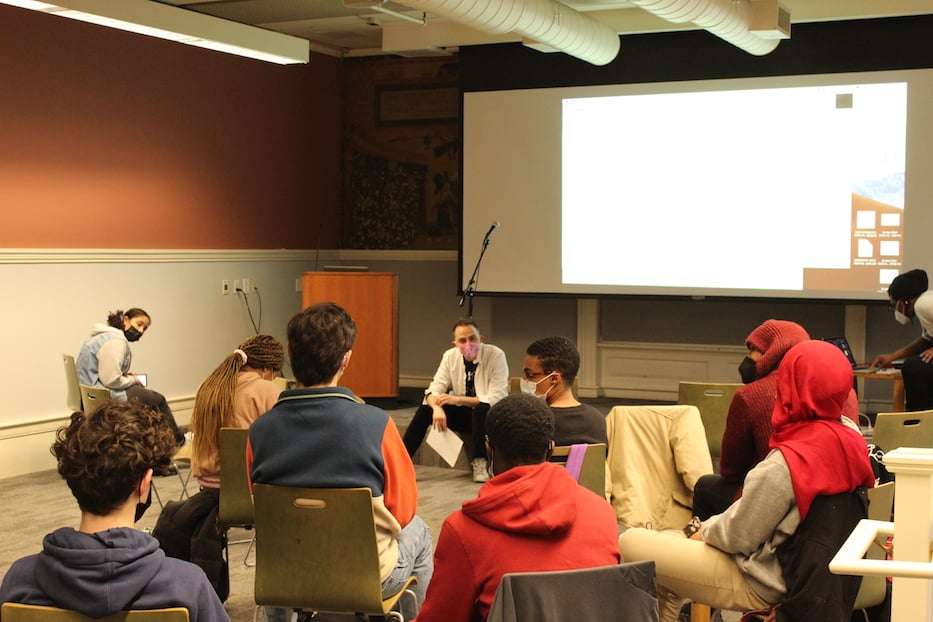 Jafferis with members of the group.

Many of the attendees used spoken word to speak out  against the presence of School Resource Officers (SROs) in New Haven Public Schools. SROs, which the city's Board of Education voted to keep in schools last January, are armed police officers who work within school buildings. Since last year, SEJ has spearheaded a citywide campaign titled "Students Over SROS," or S.O.S.

Hartford-based poet and Hartford's L.I.T. co-founder T’challa Williams encouraged the students to harness their words as a tool of resistance. She and 21 year-old Bridgeport poet Brother Bear performed at the beginning and end of the event, bookending the workshop.

“If you are dealing with situations and circumstances when you have administrators saying things that do not align with what their job descriptions is, put them on blast,” boomed Williams. "Either that or .. Take to your pen. Not only can you write poetry, you can write prose, you can write essays, you can write articles to the newspaper. You can put your voice in print forever.”

Thursday’s Lit Cypher was the first public in-person event the New Haven poetry, spoken word, and rap nonprofit The Word has held since the onset of Covid-19. It was also the first mashup event held between Students for Educational Justice (SEJ) and The Word. The two organizations, which ordinarily host individual weekly meetings apart from one another in New Haven, converged at Ives. 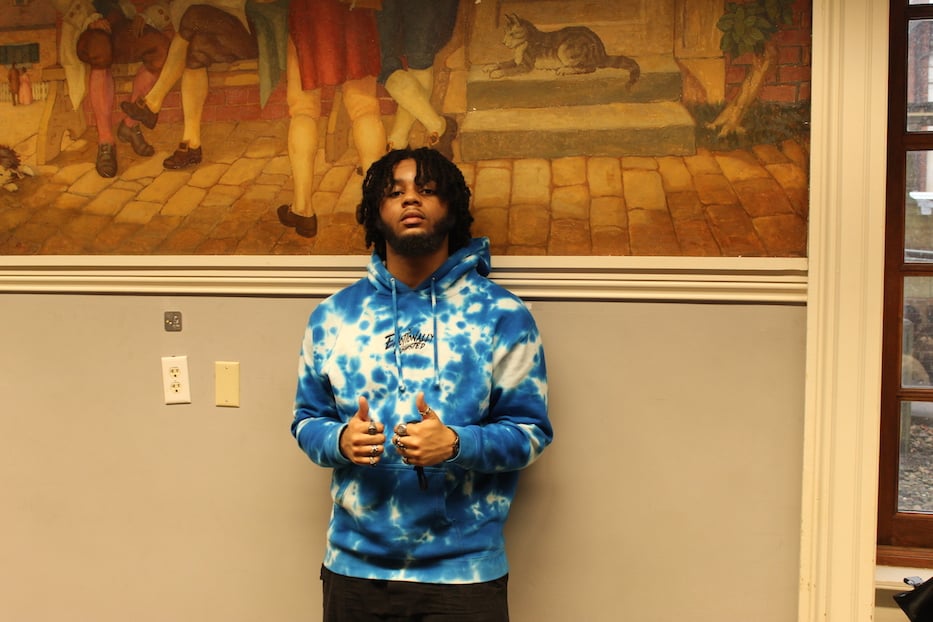 SEJ set the tone. SEJ member and high schooler Ethan Masoperh raised his voice to explain SEJ’s campaign this school year: lobbying the New Haven Board of Education to redirect the funding of school resource officers (SROs) into mental health resources, including social workers, guidance counselors, and additional staff members to provide students with much needed support. His comments come as the city holds its annual budget hearings.

SROs “are basically cops that are stationed in schools with actual guns and stuff and we’re trying to get them removed because they create an unsafe learning environment for students and they also abuse students,” Masoperh said.

While the students chattered, the room bounced to the sound of hip hop beats. Cliff Schloss, a teacher at The Word, sat to the side of the carpeted stage, fingers flicking across his portable sound equipment.

Mic in hand, facilitator Aaron Jafferis paced the stage, steady in front of the audience. Jafferis introduced the task: to create a spoken word chorus to articulate their campaign. 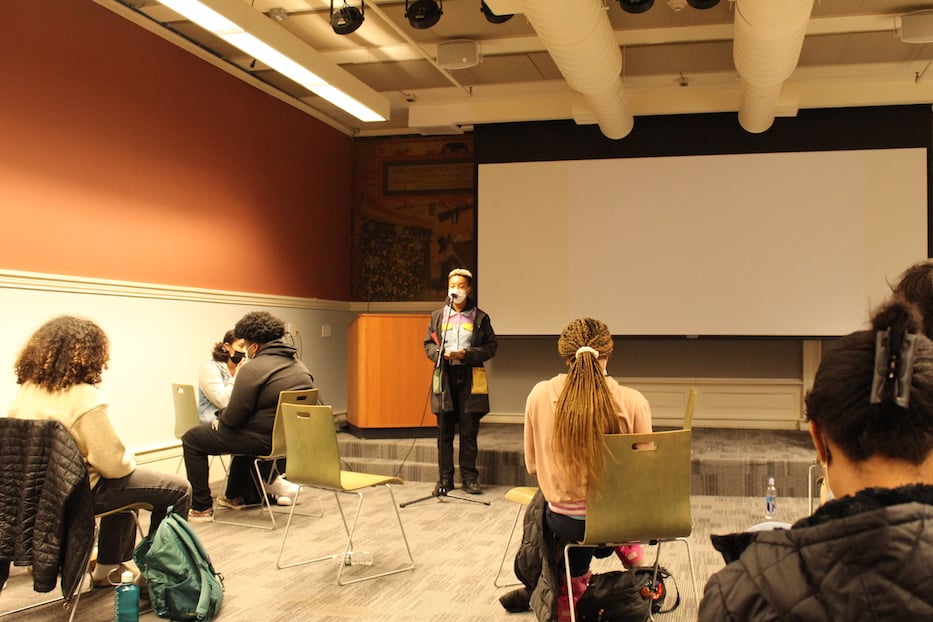 Indigaux (spoken word artist Dyme Ellis, who has been with The Word for years) reads their poem to the crowd.

“What’s the message that we want to get out there?” he coaxed.

Student-poets were quiet for a moment, until one of them helped to break the silence: “Why don’t we start with ‘Students Over SROs?’” the student suggested.

Jafferis typed the line on his laptop, and the beginnings of the group’s collaborative effort appeared on the projector screen.

The students settled into their quiet once more, then brainstormed individually and in small groups. The hip hop beats continued to rumble in the background.

Jafferis bopped to the beats, the pops of color visible on his Converse high top sneakers. He once again encouraged the students to throw another line into the chorus.

Nieves, who sat towards the front wearing honey-colored braids, chimed in. “How about: ‘the cops be faded / but our mental health isn’t chanin?’”

The room burst into a collective appreciation, with students and educators sounding their support.

The lyrics began to flow. Jayden Carty, who sat in the back of the room in a black-and-white checkered flannel, eased his way into the mix.

“They try to compress our own / peers and opinions,” he offered, rhyming “own” with “SROs.”

Nieves and another student helped to add a third line onto Carty’s contribution, and then Carty helped wrap it into a bar:

“Students over SROs/ They try to compress our own/ Peers and opinions/ over-checking, causing tension / till it feels like we’re bout to explode.”

The next task was envisioning the alternative. What would diverting the budget for SROs to mental health care look like? What kind of resources would the budget go to instead?

There was chattering across the room. Students began to construct a collective vision of a high school environment in which students’ mental health is not only supported but made to thrive.

“Black and Brown therapists,” a student pitched in.

With a vision moving forward, Carty wrapped it into a rhyming bar: “Restorative justice is what we need on these blocks.”