Marjorie Wolfe Gets To The Point 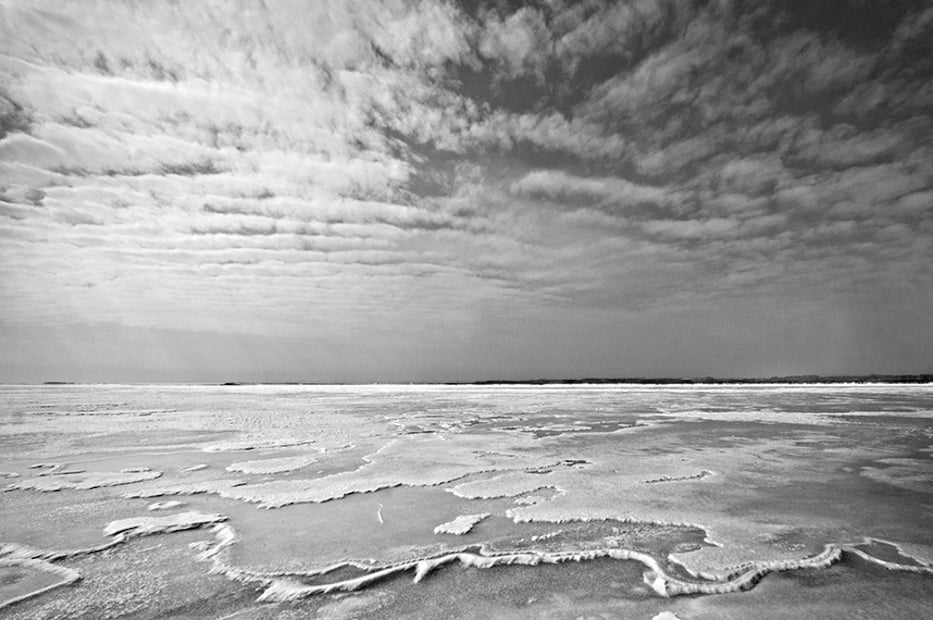 The lake stretches out, so still that at first you think it’s sand. Above, the clouds hang low, wispy and white like spun sugar. At the horizon line, a strip of land peeks out, just barely visible. Sheaves of light break through the clouds. And that’s when it becomes clear: this isn’t a huge sandy beach at all, but a lake frozen in the dead of winter, waves stopped mid-rise before they can crash into the shore.

Sepiessa Frozen is one of the photographs populating Sepiessa Point, the latest exhibition from artist and photographer Marjorie Gillette Wolfe at Kehler Liddell Gallery in Westville. The show, which documents Wolfe’s visits to Tisbury Great Pond at the Sepiessa Point Reservation, has been nearly two decades in the making. The exhibition runs through Feb. 9.

Wolfe, a lifelong Westvillian who grew up visiting Martha’s Vineyard, first stumbled on Tisbury Great Pond by mistake. On a visit to Martha’s Vineyard in 2001 or 2002, she was following a trail map with the intention of getting to the Atlantic Ocean. Instead, she reached the pond, a 700-acre body of water at the south end of the island. 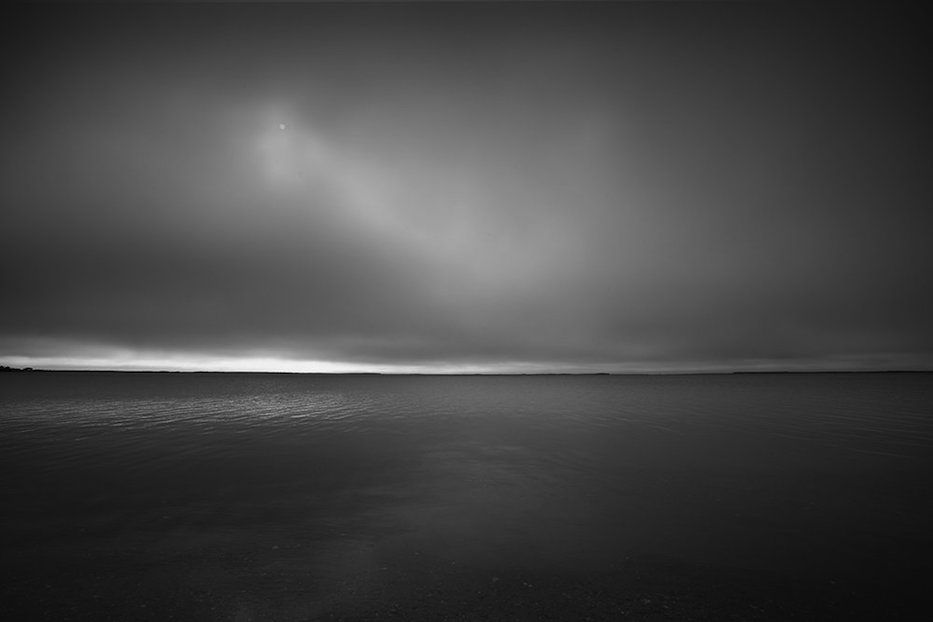 Separated from the Atlantic Ocean by a narrow barrier beach, the pond is fed by freshwater streams and has found itself recently at the crosshairs of climate change as a warming world affects the ecosystem beneath its surface.

“When I got there, I was completely blown away,” she recalled in an interview at the gallery Thursday afternoon.

She began to learn about the pond’s history, which includes at least 500 years of care from the Wampanoag Tribe. In centuries past, the barrier beach was opened by members of the tribe who realized how beneficial the salt water was for the marine life in the pond. The opening allows the pond’s water to become brackish, which is especially good for the fin fish and shellfish that live in it. Now it is manually opened up four times per year, meaning that the body of water is constantly shifting, and never looks the same on a given visit.

From the very first time she saw the pond, stretching out to the barrier beach and on to the ocean, Wolfe knew that she wanted to come back. Now she returns close to 10 times a year. None of the photographs list their dates, giving the sense that the years flow into each other just as the tide does to the sand.

“To me, other than Paris, it is my favorite place in the world,” she said. 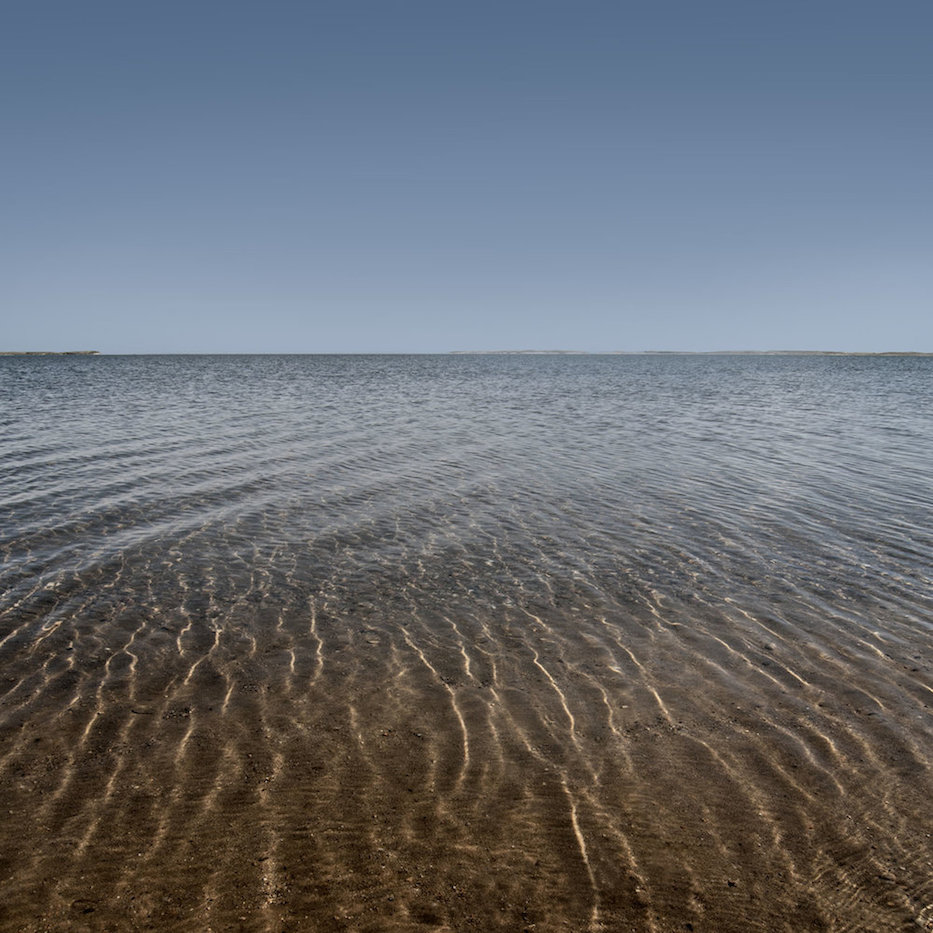 The resulting photographs are presented largely in grayscale and occasionally in color. When she is shooting, Wolfe hikes for miles with her camera equipment to get to the pond. In 2013, she began doing panoramas of the area, for which she will stitch together between 12 and 15 different images to create a sort of wide, fisheye view. She has trekked out to photograph a different side of the beach, which she joked was “like the moon” in its other- worldliness by the time she got there.

But the strength of the exhibition isn’t that it’s soaked in sentiment. Wolfe may love the area—that much is clear from two decades of dogged documentation—but the images speak for themselves, telling a story of a place worth protecting, preserving, and holding close as if it is in one’s own backyard. Low tides meet pulpy, pink horizons the color of ripening fruit. Water stills and swirls around pockets of sand. Viewers step closer and start getting to know the pond.

In Sepiessa, the the water is unhurried and almost glass-like, rippling just slightly beneath a low, charcoal-colored sky. At the horizon line, a band of beach peeks out just so, announcing its presence. There’s something sublime there, as if it is just the pond and the sky having a nice heart to heart. For a moment, it’s hard to remember that human eyes and equipment—Wolfe, for whom the viewer becomes a stand-in—are there to capture it at all.

All of the photographs have that kind of tug. Presented side by side, Sepiessa Rough and Sepiessa Sand beg the viewer to come closer and consider how two images of the same place could be so different. In one, the wind has picked up and waves are rolling right to shore, capped in white and gathering speed and volume. In the other, the water is clear and full of light, a gold sheen rolling over the waves. The sand beckons, an open invitation just barely covered by inches of water.

Wolfe has also included images of the path to Tisbury Great Pond, marking it as a sort of unexpected pilgrimage route. In several, massive trees stand at attention with long, spectacular limbs that weave into each other. Patches of brown grass and ice unfurl by the road, clear that they have a mind of their own. The frames fill with high grasses, airy clouds, darkness and snow.

When the gallery is quiet, as it was on a recent visit, it feels as if the images themselves might compare notes with each other. Where did the same spot feel calm and where it was suddenly at risk of getting covered by the tide? Where did it flood, threatening shellfish that have called the pond home for years? Where did Wolfe know what she was walking into and where did she have no idea? What may not be there the next time she returns?

Marjorie Wolfe's Sepiessa Point runs through Feb. 9. Wolfe will speak about the works at an opening reception on Jan. 12, where the gallery will also celebrate its New Members Show. For gallery hours and more information, click here.