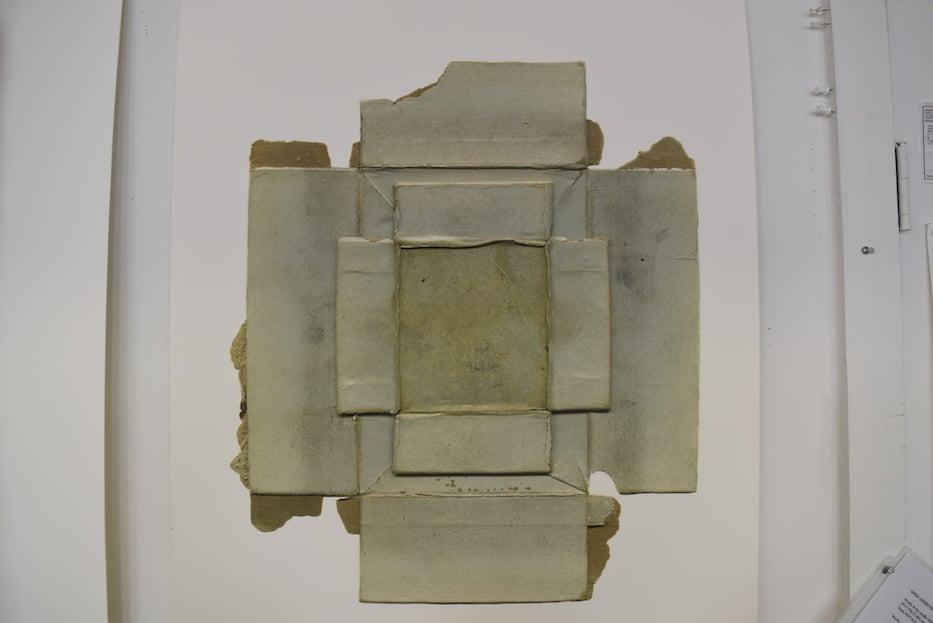 The cardboard box in the photograph is torn and flattened, each edge, flap and corner creating a mosaic of squares and rectangles. The lacy edge of a doily peeks out from underneath. The photograph is two-dimensional; the layered shades of white and tan, cream and taupe add to that flatness. But there’s something about the crispness of the edges that makes you think you could slip your fingers underneath and lift the box off the page.

White Squares by Linda Lindroth was on display in the artist’s studio during City-Wide Open Studios (CWOS) this past weekend. Lindroth and several of her artist-neighbors opened their doors on the third floor of the Marlinworks building on Willow Street in East Rock, allowing visitors a glimpse into the creative processes behind their art.

Lindroth’s large-scale macro photography begins with a search for small, very old, paper boxes, ones that are under six inches and in disrepair. She’s equally fascinated by the story behind each box, from the graphic designers, calligraphers, and other artists who created it, to the person who held onto it for so many decades.

“I’m interested in what is falling apart about the box, and how it survived,” she said during a conversation in her studio this weekend. 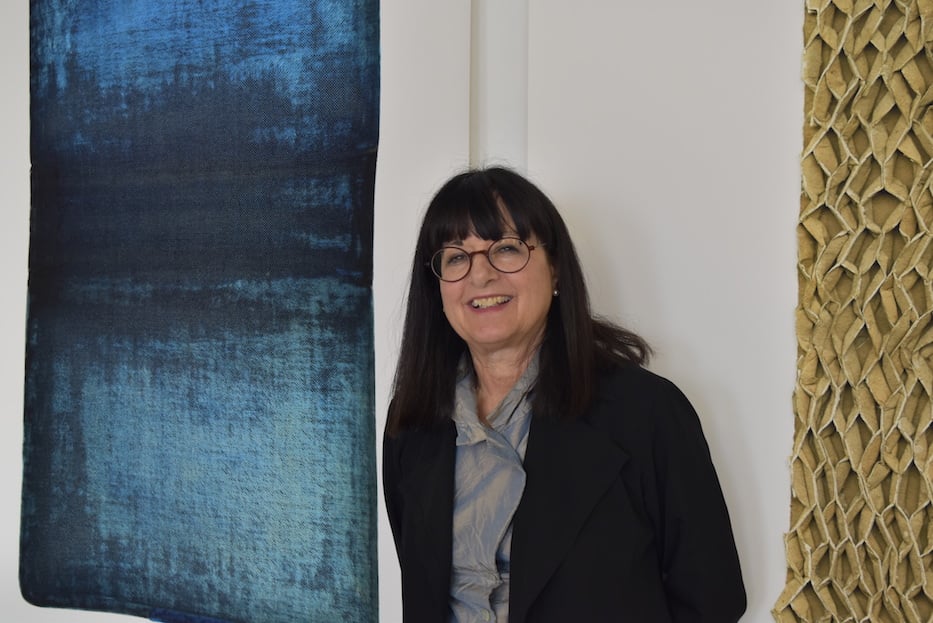 On the back wall of her studio, Lindroth hung a dozen or more test strips—a slice of a photograph printed on a thin strip of paper as a test run for the full print. Close up and arranged one after another, these tiny boxes almost become like landscapes.

The tears and folds are like cracks in dry land. Places where the top layer of paper has flaked away have a texture like exposed rock. Blocks of color printed onto a box are like fields carved into the countryside, but in bold, bright blues and violets instead of shades of green and brown and yellow.

But it’s not just boxes that take on a new life under Lindroth’s lens.There are photo albums from the late 1800s, the nap of the velvet worn flat and smooth by countless pairs of hands, creating endless shades of navy or burgundy in the finished photographs. Or folded sheets of crepe paper and bits of soft fabric that become abstract fields of waves and curves, lights and shadows.

A bright yellow chunk of temporary road striping, found washed up on a beach, is like a weathered old ship, corroded rust red at the edges and graced with a few barnacles.

“I like the relationship between the viewer and the piece,” she said. “After a little time, and the closer they get to it, they’re surprised by what they find.” 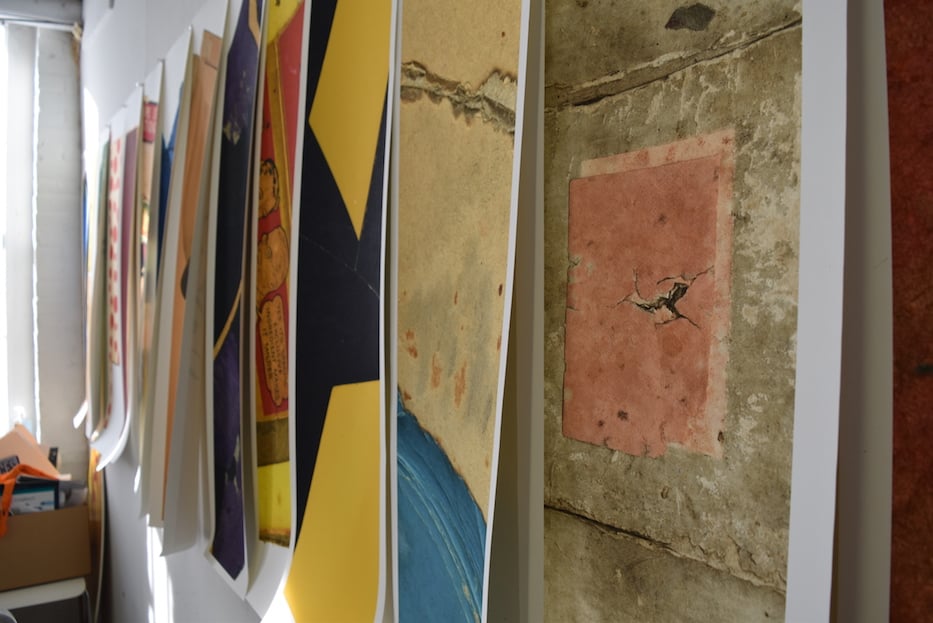 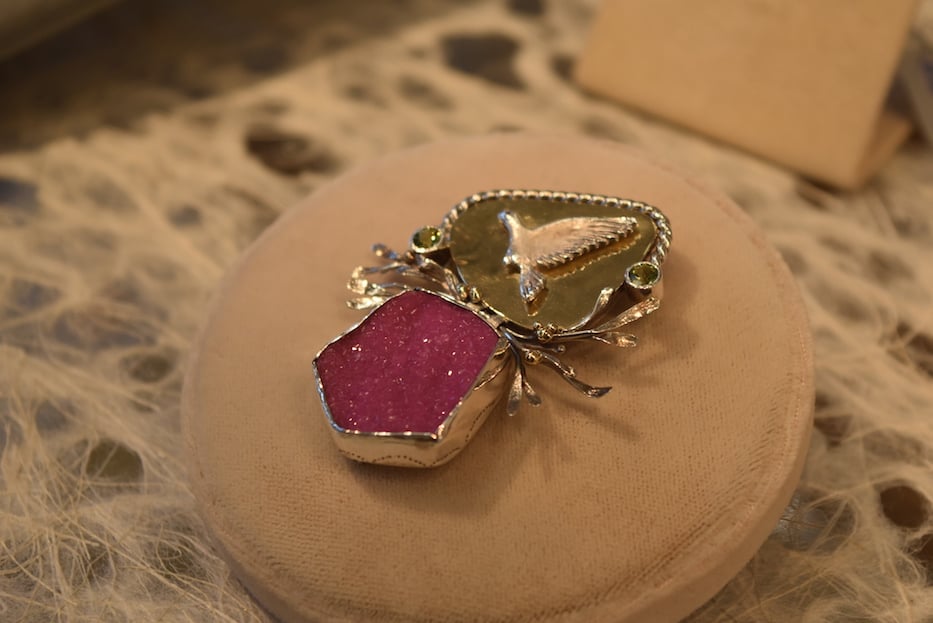 Further down the hall, Constance LaPalombra displayed western mountains alongside urban landscapes full of soft colors, soft light, soft edges, but eerily devoid of people. Jeweler Nancy Karpel showed off pieces made with gold, silver, and gemstones so sparkly they looked like pots of glitter. Artist Jenny Krauss set out an array of the brightly-colored, embroidered purses, belts, and pillows she makes in partnership with artisans in Peru.

Krauss also displayed some of the abstract paintings she makes with water-based paints on non-porous surfaces, some of which are featured in Dreamscaping, a group show running through Jan. 5 at The Whitney Center in Hamden.

In these pieces, abstract forms appear against pale washes of color, some like segmented worms, others like flower petals or cells dividing. Krauss says that the “imagery comes from what the paint does on the surface.” 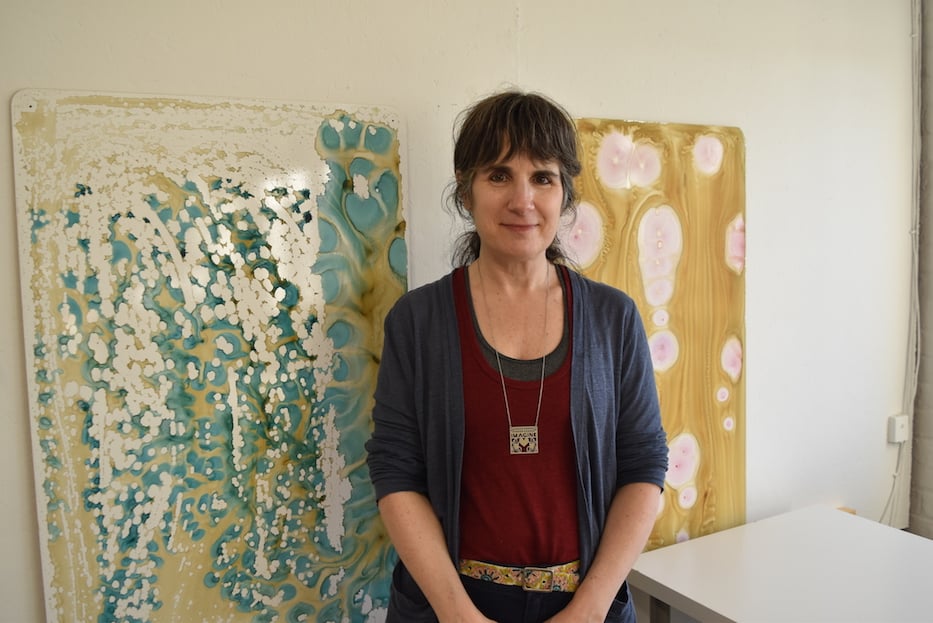 The idea came to her one day when, after using a plate as an improvised palate, she ran it under the tap to clean it and was instantly fascinated by the way the pigment and water interacted on the smooth surface. The process continues to be experimental for Krauss.

“For each one up [on the walls here], there are 50 that didn’t come out,” she said. “I have to be very free and…open to letting things happen.”

In another wing of the building, Artspace Artist-in-Residence Anatar Marmol-Gagné was offering visitors a sneak peak into her world of puppets and fiber arts. Marmol-Gagné’s studio is clean and bright and open, and yet filled with bits of inspiration: costumes, props, set pieces—all tiny parts of the new worlds the artist is creating.

The focal point in the studio was a four-poster bed covered in a white, textured bedspread and surrounded by corsets, boots, and several old trunks. A brown leather journal sat upon it, along with felted puppets with soft white faces, rosebud lips, and heavy, dark brows that met in the middle.

Flowers graced one adjacent wall, while the other featured two papier-mache hearts painted deep red and connected by a long vein. Underneath the hearts was a sheet of butcher paper covered with lists and sketches: notes on Marmol-Gagné’s upcoming show, Calle Allende.

Inspired by one of Frida Kahlo’s journal entries, in which the late artist wrestled with an intense physical pain that was keeping her from painting, the show started out as a grad-school directing assignment. Marmol-Gagné continued to rework and tour the piece, which has themes of vulnerability, resilience, and finding the creative self. Over time it has grown and changed as she has discovered the deeper emotional layers that underpin the work.

Marmol-Gagné paused her work fabricating a prop to talk about what the show means to her. Marmol-Gagné has always felt a connection to Kahlo, and that deepened when, during the process of creating and touring Calle Allende, she was diagnosed with infertility, a condition Kahlo shared.

Costumes are encouraged at the Nov. 2 performance at the State House Cabaret, which will also include singer-songwriter Ponybird and DJ Stephanie Deranged. Marmol-Gagné said the goal is for people to come and “make a night of it.”

In a different part of the studio, a felt puppet with big brown eyes and hair pulled back in braids perched on a wooden frame. She wore black gloves and a black lace dress with a white felt apron covered in twining leaves and flowers. Opposite her sat a soft, fuzzy monster with floppy ears and horns, wide blue eyes and the hint of a smile. A south-up map of Central America, cut from white paper and pasted on a sheet of clear plastic was displayed nearby.

This unlikely collection is part of a burgeoning work Marmol-Gagné is planning to finish and present during her residency at Artspace. Called Sueños, the autobiographical piece is “a story about a little girl arriving in a foreign land and her struggle to find her place in this world” while “constantly teetering between two cultures.”

Sueños will include a visual exhibit as well as performances and is slated to open at the gallery next May.

Unable to place her visual and fiber arts above her performance art, or vice versa, she said she likes to create an environment that puts the viewer in the world of the story “right there, right now” and loves the spontaneous discoveries that happen while rehearsing and developing a show.

It’s about “starting with an idea and seeing where it takes you,” she said. “It’s a creative conversation. The show tells you where it wants to go.”

“You’re in the space and a little seed will take you somewhere else,” she continued. “The fun part is playing and discovering.”

CWOS continues Oct. 19 and 20 with Erector Square Weekend. To find out more about the studios that are open, click here.