The light was visible from the corner of Pearl and Orange Streets. A warm, tangerine glow came from a first floor window, beamed out into the cool night. Down the street, a lone walker made his way up the block with his dog.  Back across Orange, a cafe sat totally silent. A bike share station, empty since January, looked forlorn. The walker slowed down for a moment to read the message.

The message is part of Martha Willette Lewis’ Quarantine CineGram series, a nightly performance of which she shares from her Pearl Street kitchen window. As she nears the one-month CineGram mark, she has dedicated three consecutive nights to mother earth, in recognition of the 50th annual celebration of Earth Day.

The designs are made from extra office supplies, acetate paper and a single overhead projector. She turns it on from 8:30 to 10:30 p.m., then switches off the light “because I didn’t want to become that person” keeping her neighbors awake.

“It really is turning more and more into this kind of diary and calendar,” she said Wednesday, donning a pink pleated mask from Fashionista business owner Todd Lyon. “I’ve found that it is structuring my days.”

Wednesday April 22, which was officially Earth Day, marked day 25 of the project. Thursday and Friday will also pay tribute to the planet, which has long been part of Lewis’ practice. In the spirit of physical distancing, she has partnered with the Ely Center of Contemporary Art to talk about the images over Instagram each evening.

They are also posted to the Ely Center’s website, which has rolled out several virtual initiatives as its Trumbull Street doors remain closed. She is hoping to add postcards in the coming weeks, on which people can write and mail messages to their friends and family (in addition to her love for the planet, she has become a fierce advocate of saving the U.S. Postal Service).

The CineGrams, which Lewis began last month, are a product of her urge to converse—safely—with the people in her life, including those she comes into contact with as an artist. It's not that her practice has slowed, she said: she has a manuscript to complete, and still makes weekly visits to her Erector Square studio, without which "I would go completely bananas."

But she doesn't see people as she used to before COVID-19. She feels the weight of isolation, and she senses that other people feel it too. The series has given her a daily ritual that she must keep: she comes up with a message early in the day, completes the piece, flips on the projector, and appears on Instagram at 8:30 p.m. sharp. A few viewers are usually waiting for her update somewhere across the internet.

While she's doesn't like everything about the series—for instance, "I don't like that people now know where my house is"—she's gotten positive feedback from people both in and outside of New Haven, largely on social media. Some have told her that they are excited to see the new messages appear at the end of each day. Others, more infrequently, have stopped to read the messages on their evening walks.

The Earth Day messages come as Lewis herself watches nature transform around her. Before COVID-19 hit, she and the artist Scott Schuldt had plans to go on a series of canoe trips to explore lesser-known, hidden-away waterways and spots in nature. Those were postponed, although Lewis joked that a canoe itself would afford six feet of space. 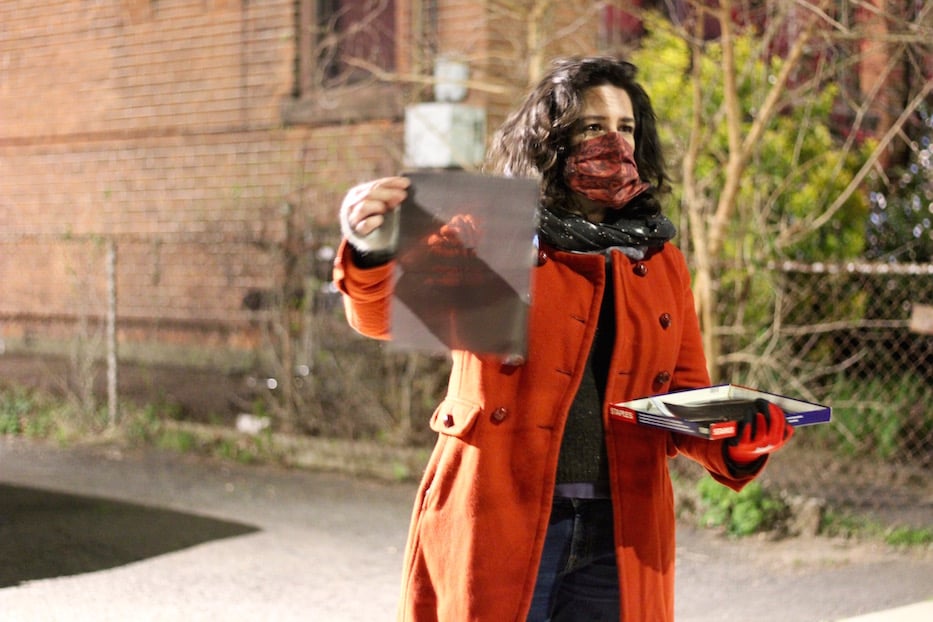 Instead, she has been taking walks through New Haven and going on hikes with Schuldt in Branford and Guilford. Around her neighborhood, she’s been spotting more small animals, including a raccoon on Edwards Street whose size and apparent moxie stayed with her for days.

As Earth Day approached, she thought specifically about what she was seeing in the world and how she wanted to translate it to her small, haiku-like light practice. The images are at once literary, performative, and cinematic, a nod to conceptual artists including Jenny Holtzer and Barbara Kruger.

“The spring has been outrageous,” she said. “The fact that we are slowing down—it’s an involuntary response. People are losing their livelihoods. People are dying. There’s a terrible cost to this. It’s hard to think about as an individual. But now that it’s happening, you have to pay attention.”

Some messages are cheeky: a recent cinegram suggesting that 2020 spring fashion includes masks, gloves, and tiny bottles of hand sanitizer felt like a surprisingly poetic dig at Washington’s inability to get a handle on the public health crisis. Another, from April 12, read as a meditation on the miracle of spring itself.

It’s true. Skies are clearer. Pollution is down. As climate activists have pointed out, a global pandemic has forced in weeks the reductions many of them have been asking for for over two decades (albeit temporarily, and with devastating economic consequences). It has laid bare the realities of environmental racism and left people asking how governments can be more sustainable even when they return to a new normal.

When she is translating those feelings into her nightly messages, Lewis said that she has tried to keep them short and open to interpretation. Wednesday, she stood outside her home in a mask, holding a glass piggy bank shaped like the globe as she spoke. Tiny bodies of water glimmered from its surface, catching in white light of a nearby street lamp.

“Mostly, I would say it’s about trying to be creative, and trying to make art in this moment,” she said. “I want to leave space for people to think about things. I prefer it to be more conversational at a time when we’re not allowed to have real [in-person] conversations.”