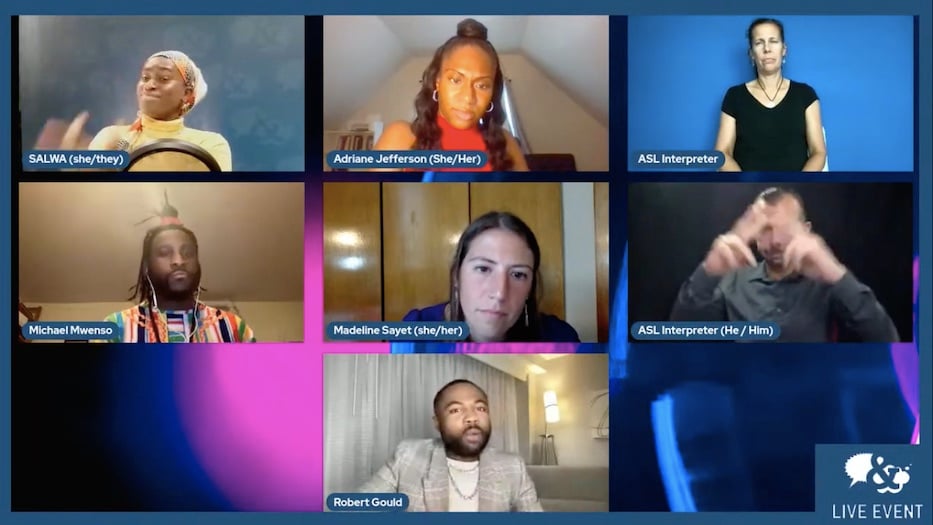 A screenshot from the panel.

As art museums reopen and plans for theater and music performances are announced, many creative professionals are reflecting on the past two years. The pandemic changed routines and lives, and now many are looking to artists to define a more equitable world moving forward.

Progressive art can assist people to learn not only about the objective forces at work in the society in which they live, but also about the intensely social character of their interior lives. Ultimately, it can propel people toward social emancipation.

Representing creative disciplines such as music and theater, the panelists also illuminated the ways that they strive for freedom within their fields and our society.

To start, Jefferson asked the panelists to share their definitions of liberation. Mwenso chimed in, noting that “I connect it to abolition. I connect it to releasing freedom within our forts. When I see liberation, I see it as taking away structures, with a new understanding of our Blackness.”

He explained that this moment of spiritual reckoning for Black and Brown communities was meant to be.

Agreeing with Mwenso, Abdussabur added that “We’re at a tug-of-war with humanity, and artists are the liberators.”

They explained that oppressive systems such as white supremacy are threatened by artists because artists will not only name but also work to overturn these structures. Their work at Black Haven builds partnerships and provides resources for Black artists advocating for social justice.

As a member of the Mohegan Tribe, Sayet looked toward decolonizing her work—and the field —“so we can tell stories using our languages.” Growing up, Sayet recalled that depictions of Native peoples were usually in “red face” on stage.

As a storyteller, she understands certain audiences will assume her work represents all Native peoples, and she acknowledged that it may take many years before we understand the damages of white supremacy—to everyone, including the white people who uphold these systems.

Emphasizing the importance of the present, Gould added that “liberation can’t be had without ownership.”

“Liberation is an idea, it’s a thought process,” he added. “When you get up every day, you have the opportunity to enact liberation.”

Noting the toll of committing oneself to this work, Jefferson invited the panelists to talk about self-care and how they establish boundaries “to take care of [their] souls.” Gould chuckled, observing the elusiveness of this concept for many artists. Sayet responded that she avoids situations where she is the only Native person.

Jefferson stressed that resources need to be disseminated more equitably, underscoring the disproportionate impact of the pandemic on Black and Brown communities. She asked how the panel of artists have been transformed over the past year and a half.

Abdussabur said that before the start of the pandemic, they had relocated to Los Angeles, where opportunities abounded. Yet within a matter of months, they had to return to New Haven. That’s how Black Haven was born.

“Once I decided that I can't keep comparing myself with who I was before the pandemic, and I said it's okay not to be okay, that’s when I started Black Haven,” they said.

Several panelists including Abdussabur and Sayet reflected on an increase in funding opportunities for Black, Indigenous, and People of Color (BIPOC) artists following the death of George Floyd and the rise of Black Lives Matter protests last year. Sayet explained that many within the theater world were more willing to raise their voices about injustices they were experiencing.

“I hope we do continue this course of centering Black and Brown voices ... I hope we get to a place where there is a push for a radical redistribution of wealth,” Abdussabur said.

Jefferson asked about the issue of tokenism. Gould said it’s important for artists to understand their worth, and “to show up and do the work.” He urged artists to be professional, but Abdussabur pushed back on this idea, citing failure as part of the learning process. They encouraged BIPOC artists to examine whose standards they are holding.

“Particularly as Black folks, we adhere to this idea of perfectionism of what white people want us to be,” they said. “Know who you are and center humanity. Don’t be afraid to ask for help. Ask for mentors.”

“As artists we have a responsibility to be reaching back, to be in collective spaces,” they added. “Artists need to be more accountable with each other so that we don’t get taken advantage of. What does it look like for creatives to link up and connect?”

The final question raised the issue of legacy and was greeted with a thoughtful pause.

“Breathe in and breathe out—that is legacy," Gould offered. "Legacy is a chain reaction, about creating something for someone in the future. Sometimes we miss the mark, and we try to build a new system, but legacy is right now.”

Mwenso closed the conversation and echoed Gould’s thoughts: “It’s not about you,” he said, “it’s about building something after you. Guiding people toward love. If your art has helped people love themselves, that has an abounding grace to it.”

Reframing the title of the panel discussion, he asked: “How do we move toward love?”