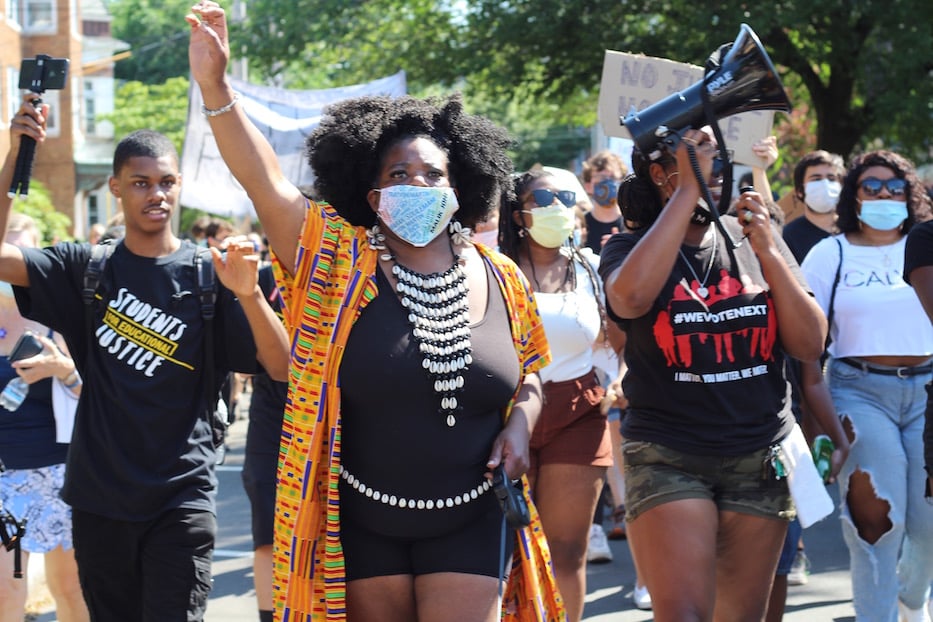 When Marcey Lynn Jones finished sewing her 4,000th mask, she took a breath.

Then she got ready to sew thousands more.

Jones is a small business consultant in New Haven, where she runs For The Glory Consultation and has become a fixture at marches and rallies for Black liberation, Black and Brown jobs, and equitable education across the city. Between late March and June 30, she sewed 4,000 masks as a way to protect her community during the COVID-19 pandemic.

That community goes far beyond the city's 18.7 square miles: while many of the masks have remained in New Haven, she has also sent hundreds of them across the country and overseas.

“I needed something that would keep my mind working on something that’s actually going on,” she said in a phone interview Wednesday. “Sewing has always been medicinal to me.”

Jones began sewing masks in late March, as she watched unemployment skyrocket during the early weeks of the COVID-19 pandemic. In her work as a business consultant, she spent her days fielding calls for help on unemployment applications, small business loans, and the alphabet soup of payment protection, emergency disaster relief, and the U.S. Small Business Administration.

By late March, she recalled working on 17 different SBA loan applications. In her work as a community organizer, she saw rising levels of need, particularly around people who were still reporting to their jobs, and could not find adequate protection to keep them safe. Masks had become nearly impossible to find: pharmacies and big box stores like Target and Home Depot were out. Amazon and eBay restricted their sales of N95 masks to government agencies and medical providers.

City and stage officials also urged residents to give whatever they had to hospitals to avoid a shortage of personal protective equipment, or PPE, among first responders. Meanwhile, President Donald Trump refused to sign the Defense Production Act, leaving sewing circles, out-of-work stage hands, theater artists, and individuals responsible for a victory garden like mask making effort.

With materials in one hand and a pattern in the other, Jones got to work. While “I fumbled a little in the beginning,” she had soon churned out her first batch, a set of heavy leather masks intended for motorcycle riders and construction workers. She knew she wanted to use lighter fabric for colleagues experiencing “power surges,” her personal terminology for hot flashes. She also noticed that masks were hard to find for children, who have smaller faces and mouths.

In early April—around the time that the Centers for Disease Control recommended wearing cloth face masks—Jones collected bolts of fabric with kid-friendly designs, and patterns that would make mask wearing seem like a little less of a chore. She created “See My Smile” masks for childcare providers, which use see-through material around the mouth and lips. After learning to use a hot press, she added flair to her mask-making repertoire: hearts, birds, butterflies, and personalized pictures.

She has never charged for her creations, although she asks for a small donation if people can afford it. She is currently raising money for Black Lives Matter New Haven with whatever she collects.

Her home soon became a mask-making operation. When a cousin in Detroit asked for five masks, she mailed over a dozen, aware that he had sisters and kids, and that cases were exploding among the city’s Black residents. When the New Haven People’s Center suggested it needed a few, she sent close to 15, with tiny renderings of the center ironed onto the front of each. She is a proud member of the Communist Party, and said she was excited to help. 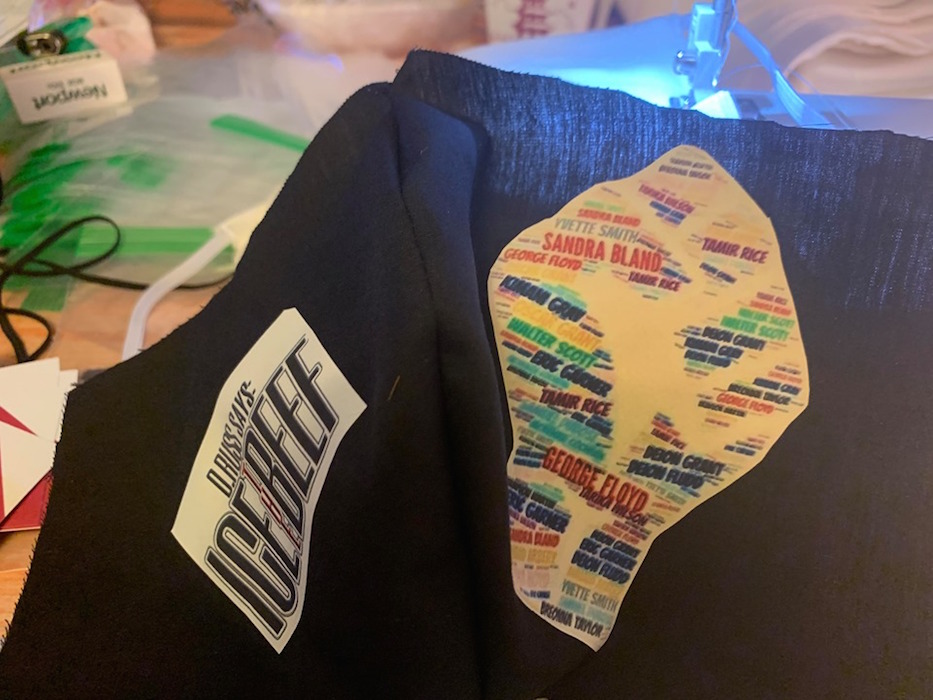 Chaz Carmon, president of Ice The Beef, recalled receiving hundreds of personalized masks from her close to the beginning of the COVID-19 pandemic, in sizes that worked for both adults and kids. All of them were emblazoned with the black-and-red Ice The Beef logo, instantly recognizable even from six feet away. She didn’t ask for anything in return.

“She is freaking awesome,” he said in a phone call Thursday. “Anytime you call Marcey in the community—whether you need food, you need clothes, you need a loan—she’s going to find it for you. She’s definitely the epitome by what we mean by the village. She works with younger kids, she works with older people. If you need help, she’s there.”

After the murder of George Floyd in Minneapolis, Jones made, distributed, and mailed hundreds of masks emblazoned with the words “Black Lives Matter,” “I Can’t Breathe,” and names of people lost at the hands of law enforcement, including to activists in New York, Chicago, and California. When she is out at rallies or protests—which is increasingly often—she keeps extras for both adults and children in her car, in individually wrapped Ziploc bags. She recalled meeting a family at a recent rally, and noticing that the baby needed a mask.

She encloses a note with every mask she sends off: “Love you and enjoy,” with her name signed at the bottom. For deliveries that she mails, she makes sure to check in with the recipients after the fact—not just to see if they’re gotten the masks, but also to see if they’re feeling okay.

"There’s such extreme need," she said. "I don’t think people really realized how important masks were until last month ... and the uptick is not coming from people who are being considerate to other people."

For her 4,000 masks, she has almost as many stories. In June, she made 60 masks and 60 matching t-shirts for the family of Kiana Brown, a Hillhouse graduate and rising star who was shot and killed as she slept inside a Valley Street home in June. On each was a hot-pressed photo of Brown with a basketball perched between her hands, neon angel wings behind her back. A blue halo hovered over her head.

Earlier this spring, Jones received an order from “an older gentleman” in Gonzales, Louisiana, a city of just over 10,000 people that sits halfway between Baton Rouge and New Orleans, and lays claim to being the “Jambalaya Capital of the World.”. Before sending the masks, she found the Louisiana state shield, and applied it to fabric using the hot press. Over the shield, she arranged the words “Surviving Seniors of COVID-19.”

“They have been through so, so many storms,” she said. She still keeps in touch with the man today. 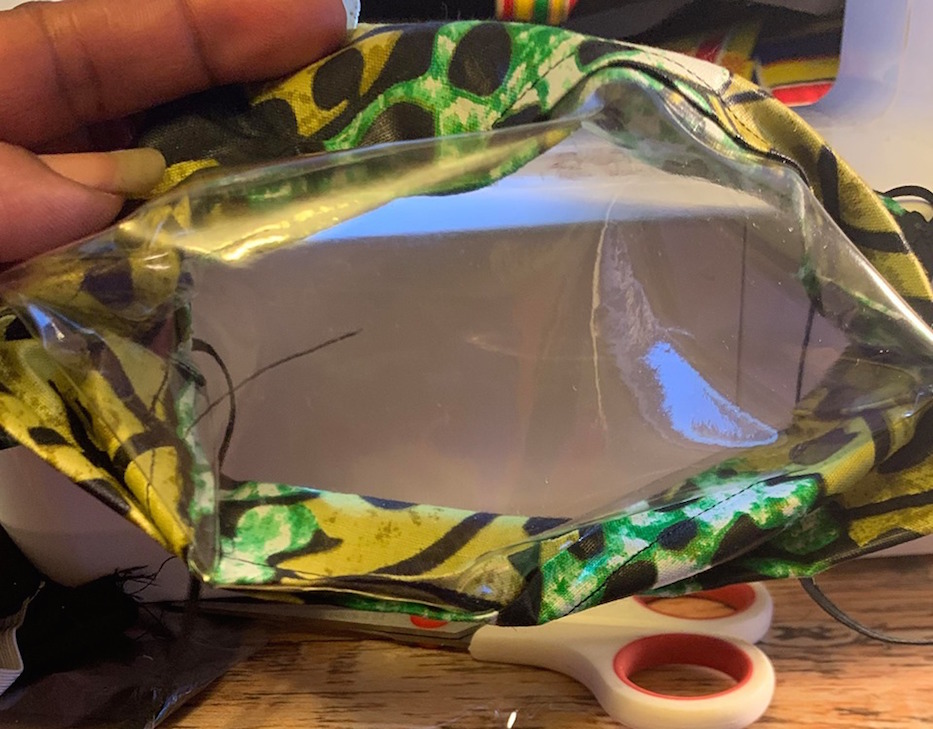 Her favorite story took place right in New Haven, just outside her home. Recently, a group of neighborhood kids saw her out in her yard, where she was working among Lysol wipes, paper towels, and disinfectant spray. When they asked her what she was doing, she explained how the spread of COVID-19 works. Now, she often sees the same kids playing outside of her home, or standing and sitting by her porch.

For her, it is a continuation of her work in the community, which has ranged from to finding emergency generators to getting food to families that need them. On social media Hanan Hameen, a dancer, organizer and educator who is currently living in the Bronx, recalled receiving a call from Jones earlier this year asking for her address.

Hameen suffers from the autoimmune disease Lupus, and has been candid on social media and in interviews about her fear of contracting COVID-19 with a preexisting health condition. Jones sent her masks without being asked, just in case her friend needed them. Earlier this year, she also drove to New York City and helped Hameen pick up the pieces after a fire in her apartment forced her to relocate.

“I love you big sis!” Hameen wrote on social media, sharing a piece that Jones wrote on her own mask-masking journey. “This is super amazing what you have done and continue to do.”