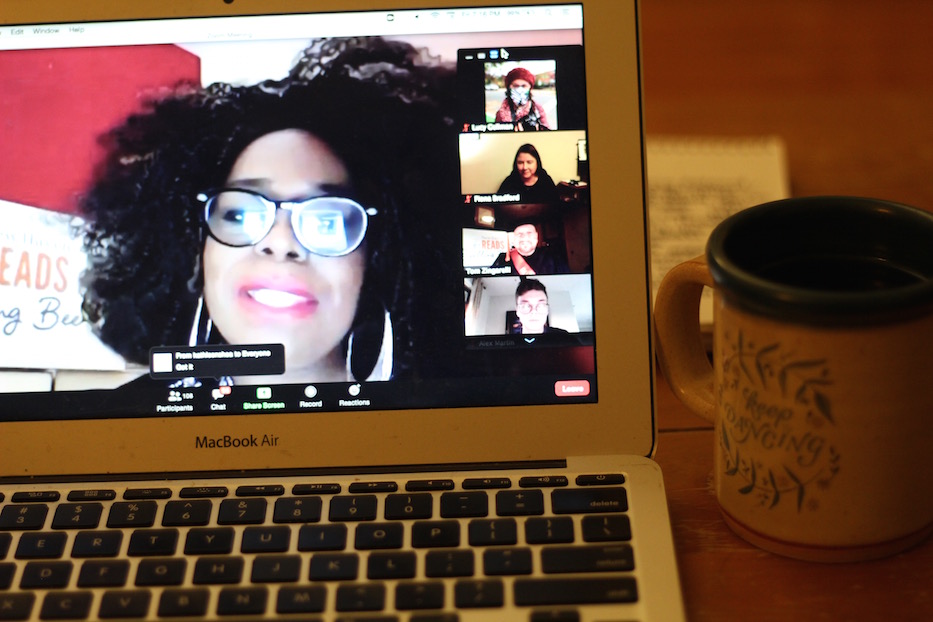 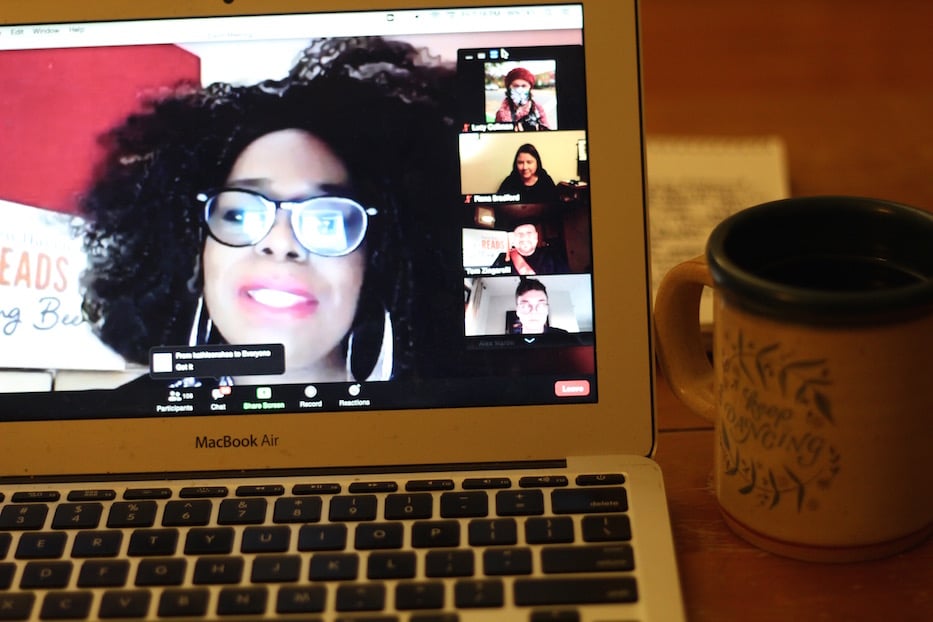 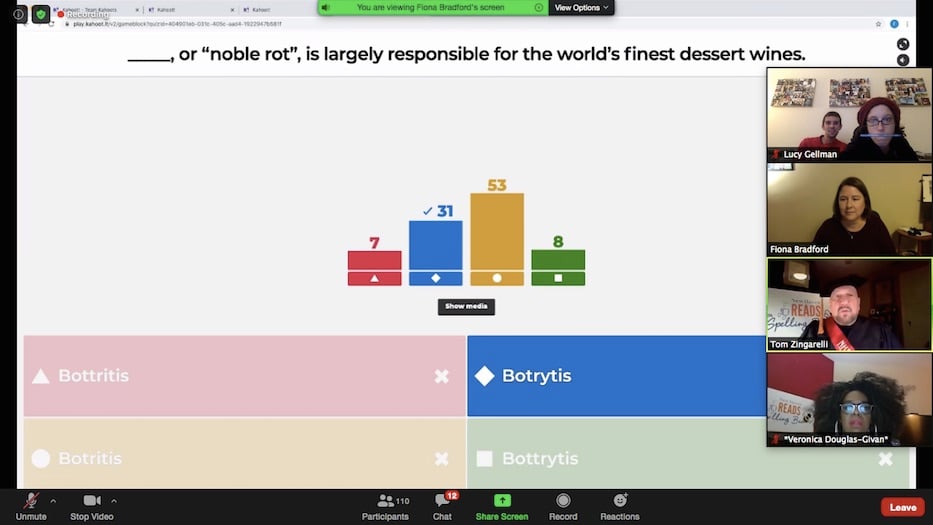 The word was botrytis.

On phones, laptops, and iPads across New Haven, spellers puzzled over the letters. In front of them, the mobile app Kahoot lit up with four options. Was it b-o-t-r-y-t-i-s, also known as the fuzzy green-gray "noble rot" that grows on strawberries and turns out fruity wines? Or perhaps b-o-t-t-r-i-t-i-s, a perfect phonetic match. Or B-o-t-t-r-y-t-i-s, with a t added just for good measure? The clock ticked down to zero as spellers squirmed.

Friday night, a global pandemic (\ pan-ˈde-mik \ noun. an outbreak of a disease that occurs over a wide geographic area, such as multiple countries or continents) was no march for New Haven Reads’ ninth annual spelling bee, moved online for the first time in its history. Over 100 households attended the event, which raised $19,560 for the local literacy nonprofit.

The bee took place over Zoom, with three multiple choice rounds run through the app Kahoot. Per tradition, wordmaster Tom Zingarelli presided over the rounds. 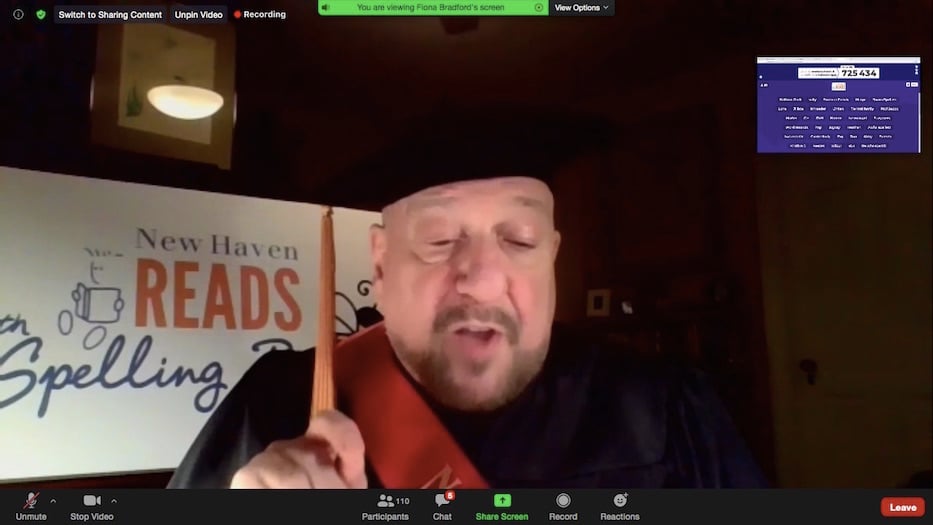 It has been a challenging year for the nonprofit, which currently works with over 300 students who are below or behind reading level for their grade, most of them twice a week. When schools closed in March, New Haven Reads moved its weekly tutoring sessions online, using Zoom’s screen sharing function for online phonics and reading programs. It also expanded its physical book bank, with free book distribution at school meal sites. Douglas-Givan noted that the work could not come at a more critical time for the city, where one in six adults still struggles to read.

This year, the nonprofit has donated tens of thousands of books (since last year, that number is 102,376), launched a project collecting books by and for readers of color, and given away 80 refurbished laptops and 10 wifi hotspots. Executive Director Kirsten Levinsohn said that another 10 hotspots are on the way.

Despite the pivot to remote learning, 206 students remain on the waitlist. Friday, both Levinsohn and Douglas-Givan made a plea for tutors who can step in and fill that gap by volunteering one hour per week or more for the organization.

“This is a party with a purpose,” Douglas-Givan said. 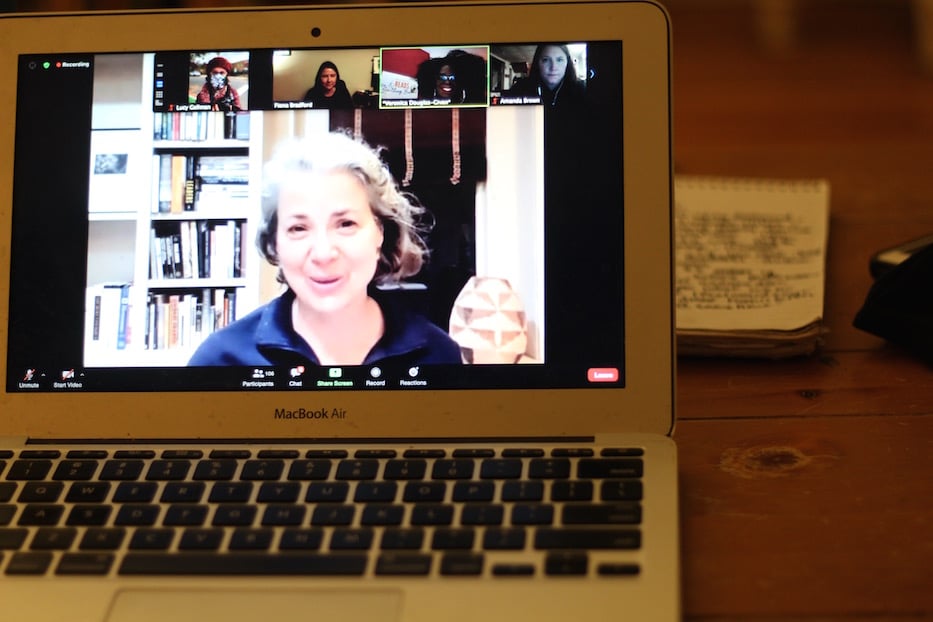 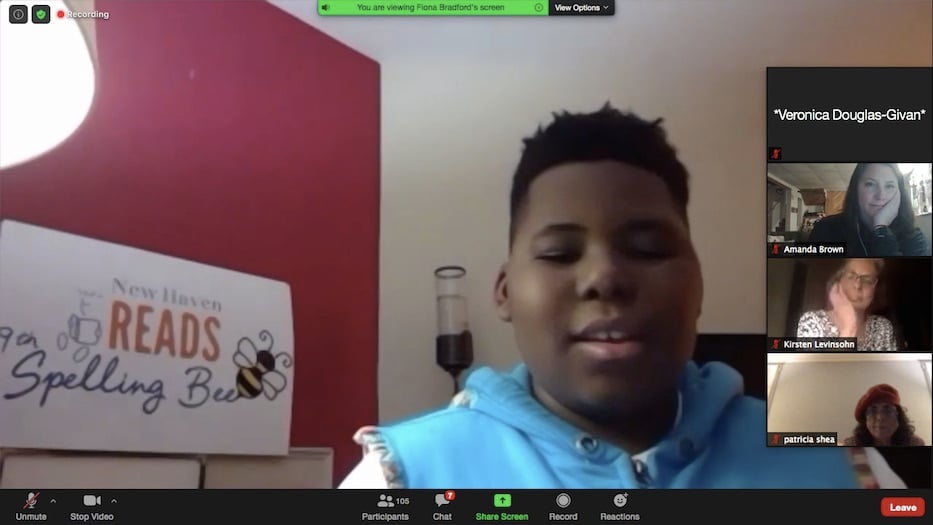 As a steady drizzle picked up Friday, the virtual bee took a surprisingly intimate turn. The event is typically held on the cusp on Halloween, with a sort of dorky pageantry built in. Teams arrive in full costume—no shortage of tiaras, hive-related puns, and glittery wings—and crowd onto the stage at the Yale School of Management. Friday, Levinsohn and Douglas-Givan greeted attendees from their homes and offices instead, inviting people into the spaces where they live and work. Teams populated a shared screen with names including “Mask It Up!” and “He Who Spelt It.”

As Zoom cameras flickered on, smiling faces filled the screen in one-inch boxes. A couple drank a beer and cuddled on the couch in the third row. Families crowded around their computer screens, kids scrutinizing Kahoot as pets popped into view and then disappeared just as quickly. Tutor Jailene Garzon, herself an alum of the program, changed her background to a fantastical landscape, with mossy green grasses and fjords stretching out behind her.

While “swarms” or teams of competitors typically play on dry erase boards, Kahoot gave four options for each word, scrambling spellings for terms such as syzygy, lagniappe, and antediluvian. Just as in years past, Zingarelli introduced words, this time racing to give a definition and example against Kahoot’s internal clock (“I haven’t even had a drink yet!” he joked after stumbling over one pronunciation). Between rounds, participants filled the chat function with supportive shout-outs to the organization. 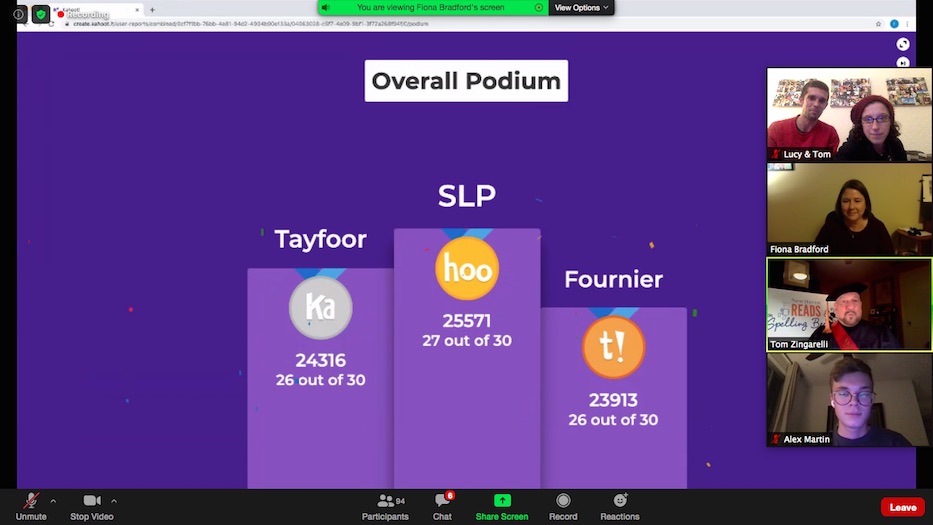 Susan Papa, a former English and Latin teacher who ultimately took first place, praised the format for its relative ease. Now 60, she caught the spelling bug decades ago in grade school, when her teachers held informal bees in their classrooms. In previous years, she competed and won New Haven Reads’ bee in person, including with fellow typo catchers from the New Haven Independent.

This year, she said she didn’t mind doing it from the comfort of her couch. While she began alone, her husband and daughter joined her by the end of the night.

“As an introvert, there was an appeal to just staying home and doing it myself,” she said in a phone call Sunday evening. “I didn’t go in expecting to win. I just wanted to have fun and it was.”

She added that the organization made its own best argument for support. Between rounds, Douglas-Givan’s 13-year-old son Jayvon joined via Zoom, recounting his own journey to literacy with tutor Ann Hartman Massaro. When he arrived at New Haven Reads, Massaro was Ms. Ann. By the time they had finished working together, she was Auntie Ann. New Haven Reads became family.

“It wasn’t just a building where you learned to read,” he said. “Knowledge is power.”

New Haven Reads is looking for volunteers who can give one hour per week or more to students in need of tutoring. For full disclosure, this reporter is a New Haven Reads tutor and highly recommends giving up an hour a week for immense literary fun (\ ˈfən\ noun. That which provides enjoyment). To get involved or find out more, visit their website.