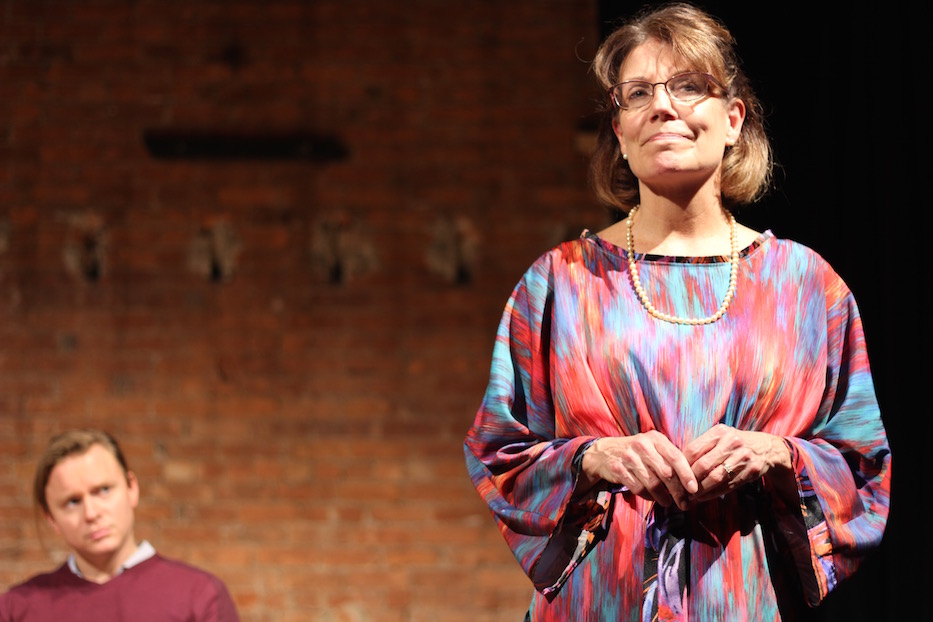 Alice has had it. She sets her palms flat on the table, then goes straight for the chairs. The legs rock back and forth, suddenly unsteady. A chair tumbles, rolls toward its side. Silverware is one slip away from flying off the table, and crashing onto the floor. And we in the audience start to wonder: is this war?

“I want a real marriage!” she exclaims.

That fight defines much of William Nicholson’s The Retreat From Moscow, opening the 2019-2020 season at the New Haven Theater Company this weekend. Directed by Margaret Mann and John Watson, the play revolves around a marriage that seems to have gone wrong and not wrong at all, and the couple trying to sort through it. Or rather, the half of the couple trying to sort through it, and the half trying to get out.

The play runs Thursdays, Fridays and Saturdays through Nov. 9 at EBM Vintage downtown. Tickets and more information are available here. 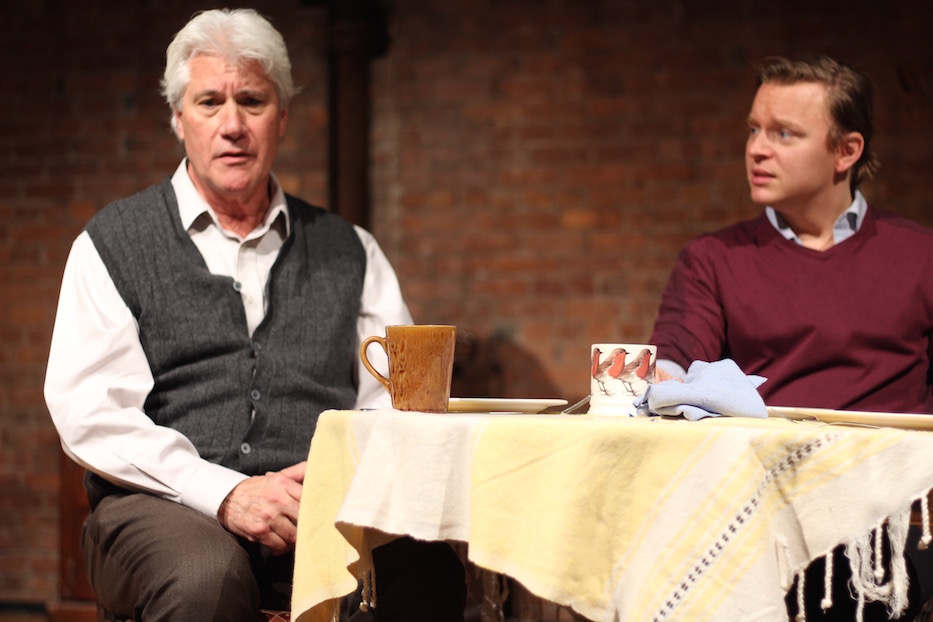 At its core, The Retreat from Moscow is two people talking through the end of their marriage, and letting their adult son get caught in the crosshairs along the way. As the work opens on a cozy home in present-day England—not Russia, as the title might suggest—the audience meets Edward (George Kulp) and Alice (Susan Kulp), who have been married for over three decades and are welcoming their son Jaime (Kiel Stango) home for a day.

Everything seems routine enough: Edward reads aloud from a volume of letters written by officers in Napoleon’s Grande Armée during its horrendous retreat from Moscow in 1812, in which thousands of men starved and froze to death. Alice speaks in half-sentences, half-poetry from an anthology of the British Romantics she has been working on for years. Both of them hide in words that are not their words that were born hundreds of years ago—so their silences with each other don’t seem too off-putting at first.

But Alice announces their upcoming anniversary, and it’s a powder keg waiting to happen. Or maybe a battlefield, the frozen edge of which opens on a great, bitter expanse. They want different things—the audience can see that much—but they’ve become so bad at using their words with each other that it seems they’ve reached an impasse. The set, furnished with a few chairs, a dining table, and chest, does the trick in stretching out their silence. Between them, Jaime becomes a human ping-pong ball.

We get the parallel, of course. When Napoleon’s troops reached Moscow in the fall of 1812, they found the city deserted and largely burned, meaning there was nowhere to stay for the impending winter. But they tried to stick it out—under Napoleon’s maniacal direction—hoping that the Russians would surrender. No dice. By the time they had moved on, the forces were decimated, thousands dying horrible deaths along the way. 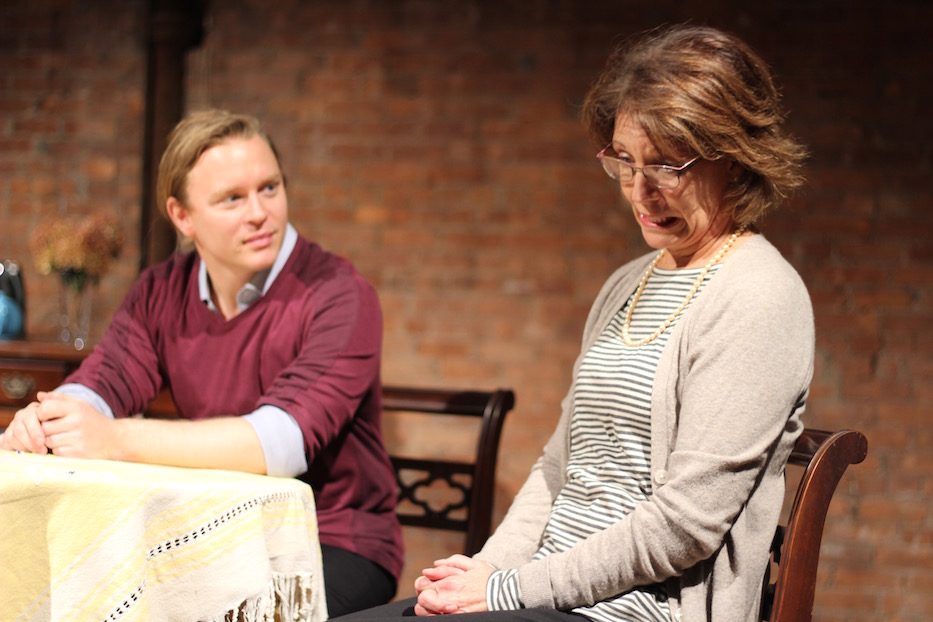 And in the midst of carnage elsewhere, poets in another country kept doing their thing, retreating into the fantastical and warm worlds of their words. Nicholson is deliberate in this pattern: he returns over and over again to the words survival and mercy, mining them for every possible nuance.

In this Moscow that is not Moscow, Kulp and Kulp master what Watson calls “the pull between raw feeling and the wanting to cover it up.” In a web of language, words roam between nineteenth-century travelogues and poetry, reality, and sitcom-esque sentences (“Is wanting to come back to life taking the easy way out?” Edward exclaims at one point).

They are nimble with the language: Susan Kulp especially chews on Alice’s words, and spits out a fully formed character one breath away from taking her life, or finding a new one. She teeters on the edge of quick and also deep depression, and we’re a little afraid that she’ll fall in to both.

In his debut NHTC performance, Stango gives Jaime the despondent, impassive sort of exhaustion the role requires, tapping into the danger of toxic masculinity when he is at his best. In so doing, he’s quite compelling: the child who wants to help but also wants to navigate his own life, and isn’t sure how to make that work.

Nicholson does not write women with particular skill—a central concern of Alice’s over the rules of religion feels particularly contrived—but if this is war, Kulp and Kulp (who are married in real life) spar particularly well and make up for it. Arguments unspool; wedding anniversaries are forgotten, protested and discarded; tea is poured and then grows cold, like a marriage left unexplored for too long. 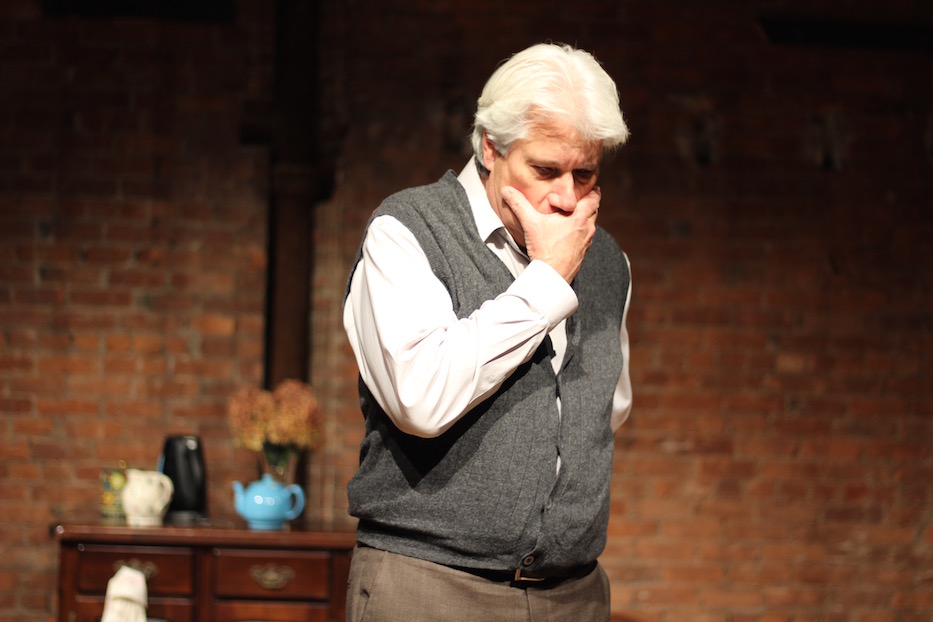 Something sparks and hisses between them, particularly as Jaime watches from the background (props to Stango, who plays the frustrated, overstretched and helpless only child particularly well). They argue over who will fix clogged drains and clean out brown bathwater, and small missteps become major transgressions. In between, there is the child who becomes the caregiver, and is shocked by the decisions he must make.

As Alice, Susan Kulp brings a particularly untethered kind of energy to the character. As she descends further and further into a depression, her mania is palpable, sometimes hanging heavily over the audience (she brought something similar to Rasheeda Speaking at Collective Consciousness Theatre last year). Across from her, George Kulp has a stoicism that comes off first as even-keeled, and then as a failure to express and navigate his emotions. While the ending feels a little sitcom-ready, they nail it with immense tenderness and heart.

In Mann’s able hands, The Retreat feels understated and relatable. After playing Alice in 2008 in Oregon, the director said she was drawn to the script for its poetry and central intent: to show that a marriage is really, really hard to maintain if a couple is doing it right. And that it might require getting down and dirty more than a few times.

“This is an exploration of what happens when things break down,” said Mann before a tech rehearsal in late October. “When people who are in a long marriage take it for granted, and then suddenly things go awry. It’s not tragic, it’s just very human. It feels very real, and it feels very true.”